Any day now, the city will announce which master developer team it has selected to implement the billion dollar Denver Union Station Master Plan. In the running is one team led by Continuum Partners and East West Partners, and the other team (known as Union Station Partners) is led by Cherokee Investment Partners and Phelps Development. Which team will win? Hard to say… but the good news is that, regardless of which team prevails, Denver’s Union Station is poised for a remarkable transformation into the region’s multi-modal transportation hub.

First, here are some images from each plan. You can download the full plans at: http://www.denverunionstation.org/master_developer/ 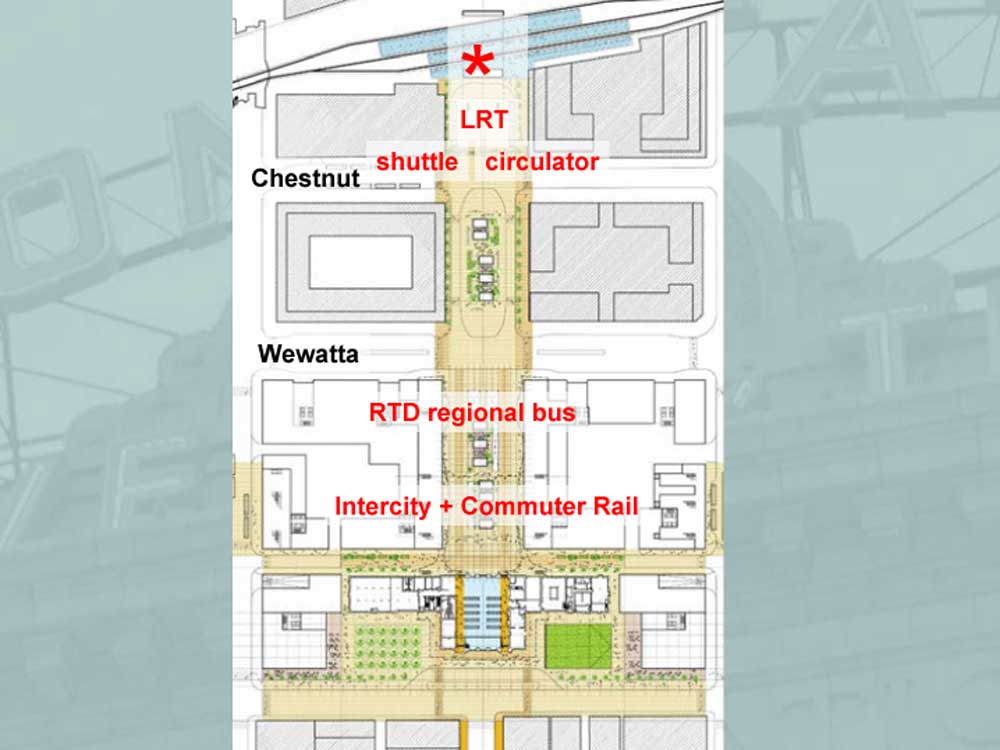 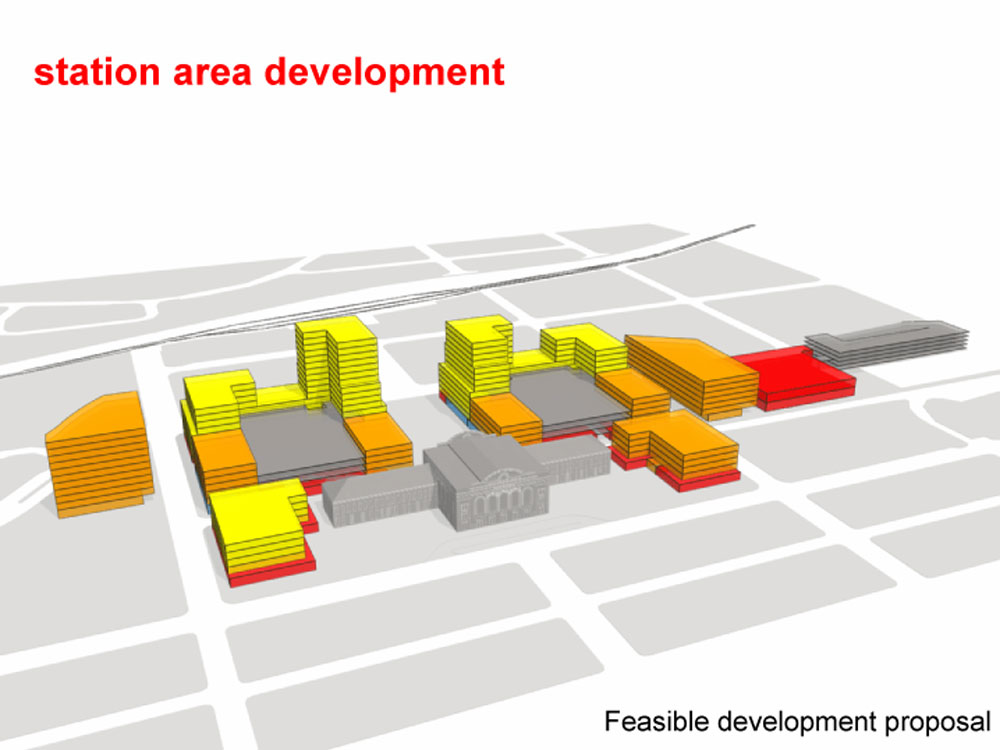 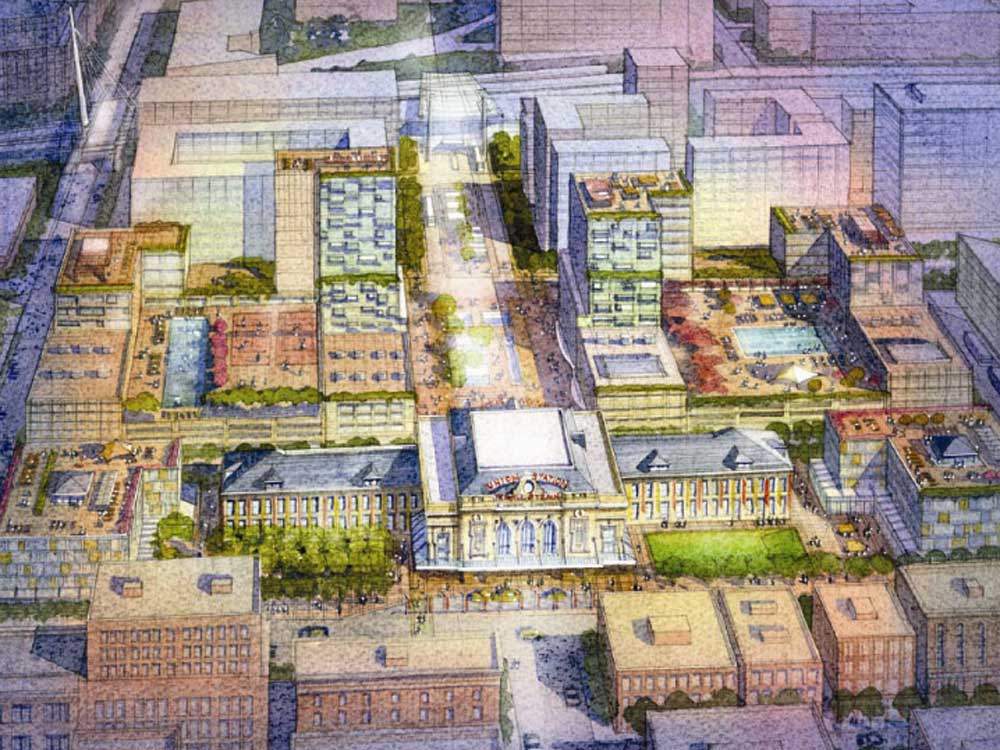 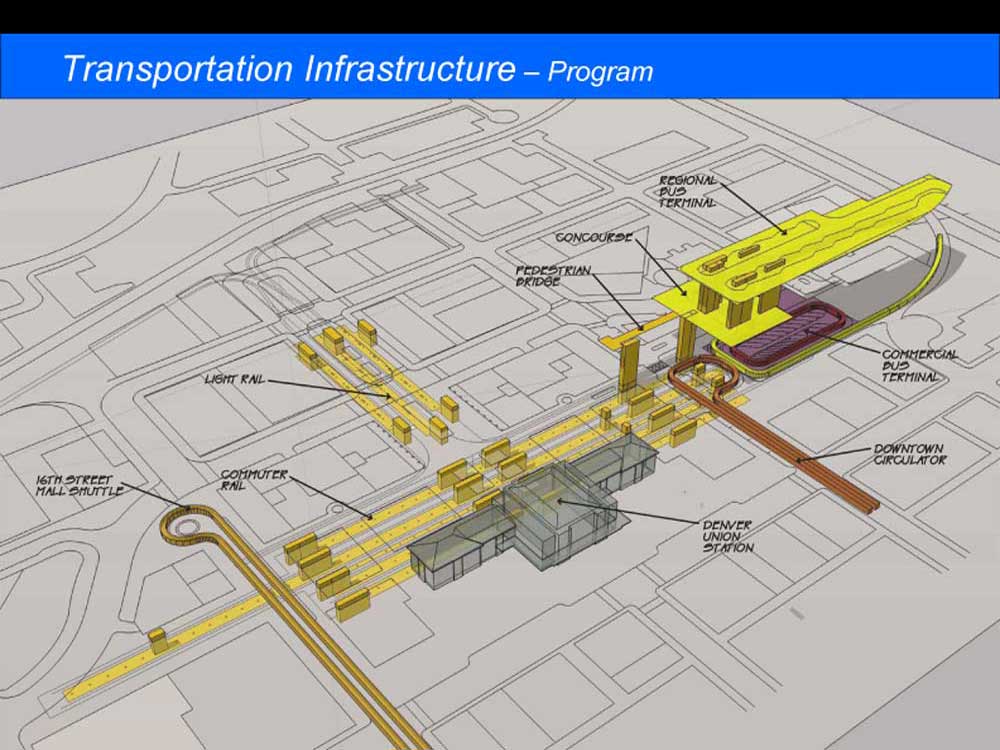 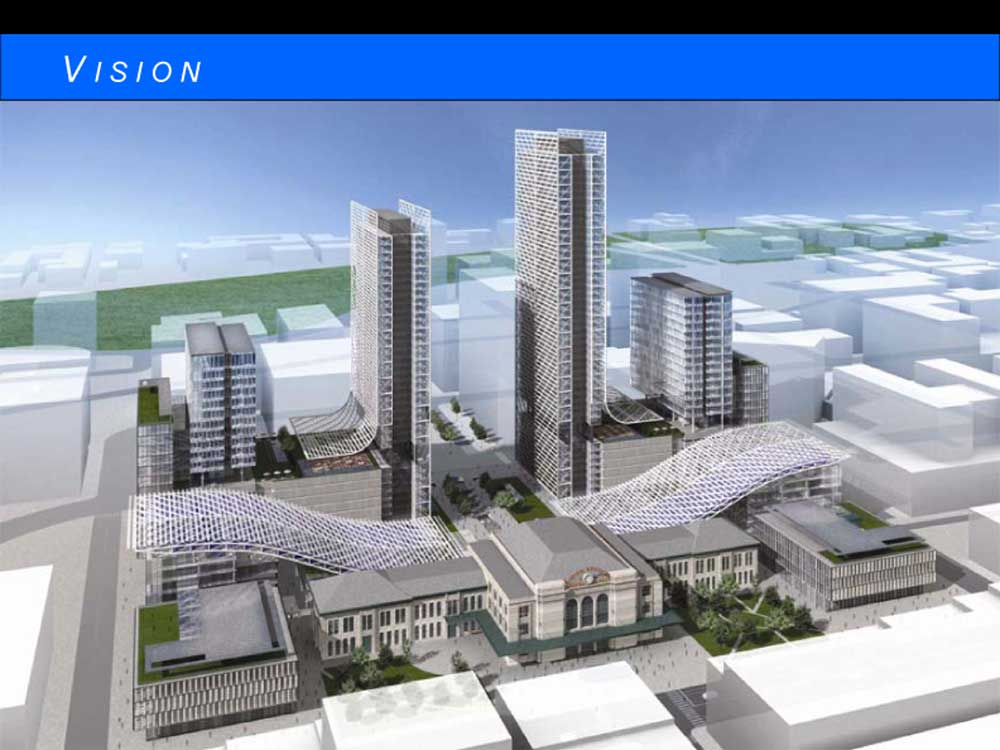 Here are a few thoughts about the competing proposals:

Commuter Rail. Both the Continuum/East West (CEW) proposal and the Union Station Partners (USP) proposal place the commuter rail station underground immediately behind Union Station, as recommended in the Master Plan. Both teams also promise to complete the commuter rail portion up front, and not as a future phase as suggested in the Plan. A good choice by both teams, and great news either way for Denver commuters.

Light Rail. The CEW plan puts the light rail station at grade at the end of 17th Street by the Consolidated Main Line tracks. The USP plan has the light rail tracks coming in under 17th Street, with the station underground below Wewatta Street. If you’re making a light rail/bus or light rail/commuter rail transfer, the extra two block walk or shuttle ride required by the CEW proposal could be a pain if it’s nasty weather out, if you’re in a hurry, or if you’re lugging around a suitcase. Plus, there’s the issue of having to cross busy Wewatta Street at grade as well. On the other hand, the USP layout, with its light rail station spanning Wewatta Street underground, provides vertical access to the station from either side of Wewatta, eliminating the need to cross the street at grade, and has connections to the other transportation modes very close by as well.

The additional pedestrian traffic generated from light rail riders by the CEW plan would help activate that stretch of 17th Street, but partly at the expense of transit efficiency. (Ironically, because members of the CEW team already own land fronting 17th Street between Wewatta Street and the Consolidated Main Line tracks, if the USP plan is selected, CEW would still be responsible for creating a dynamic pedestrian environment along that stretch of 17th Street anyway). Given that the goal is to create a convenient and efficient transit hub and to reinvigorate the historic terminal, putting the light rail station several blocks away is not ideal. I think the USP light rail configuration is best.

Bus Terminal. The CEW proposal places the bus terminal underground next to the commuter rail station behind Union Station. The USP plan has the bus terminal as part of the structured parking facility across 18th Street from Union Station, and connected to the rest of the complex by a pedestrian bridge. The CEW bus terminal location is about as close and convenient as you can get. The USP bus terminal location is almost as near, and I like the idea of putting all the cars and busses together off to the side and reserving the prime space behind the historic station for the trains.

16th Street Mall Shuttle/Downtown Circulator Stops. The CEW plan has the end-of-the-line stops for both the shuttle and circulator systems at the end of 17th Street near their proposed light rail station, with an additional stop for each system next to Union Station as well. The USP plan simply ends both systems with a final stop for each on either side of Union Station. Consequently, both plans provide shuttle and circulator stops relatively close to their respective light rail, commuter rail, and bus station facilities. The main difference between the plans is that CEW uses two sets of stops to provide access to their various transit facilities, instead of one set of stops under the USP plan. Again, the USP plan provides better efficiency between the different transportation modes. The CEW layout, however, does allow the shuttle and circulator systems to penetrate deeper into the Valley, providing a convenience for people heading to or coming from the booming Riverfront Park, Platte Street, and Highland neighborhood areas.

Development. The USP plan provides roughly a million square feet more development than the CEW plan. The tallest building in the CEW proposal would top out around 20 stories, with most of the rest in the 10-12 story range. The USP plan features dramatic 46-story and 36-story towers, along with several shorter buildings. Given that this site should be the mother of all Transit Oriented Developments, it seems to me the CEW plan doesn’t go far enough in providing density around the station. We have one shot at developing this site and doing it right. It would be disappointing if we found ourselves a decade from now wishing we hadn’t been so conservative in the development program at our greatest TOD location. We should seek to maximize the development at this site.

Urban Design and Architecture. Based on the rendering, the CEW plan seems to create a pleasant environment, but lacks a “wow” factor and doesn’t seem particularly visionary. The public spaces under the CEW plan would no doubt be nicely done, but this site needs more than just a great pedestrian environment. This site needs a great pedestrian environment and something bold and iconic to reflect its significance to our city. With Union Station surrounded by the low-rise buildings of LoDo and the mid-rise buildings of the Central Platte Valley, the two dramatic skyscrapers in the USP plan would ascend above everything else around them, and would stand as a landmark feature in our Downtown skyline and as a beacon for millions of transit riders over the coming decades. The USP plan has some punch and ambition to it. The CEW plan seems overly cautious.

Cost and Implementation. This is obviously a critical issue, as the CEW plan is about $75-$100 million less expensive than the USP plan. Some people question whether the USP financial plan will work, and the city’s Union Station committee even recently asked USP to provide more details about their financing plan. I don’t know the details of the teams’ financing plans or if they might work or not. But both teams are comprised of firms with extensive real estate development experience, so I doubt they would jeopardize their collective firms’ reputations by advancing a plan that simply cannot be implemented. Therefore, I assume that if each team says it can make the financing work without seeking additional public money, then that is the case.

We shouldn’t select the winning plan simply based on which has the smallest private-sector investment requirement. We should select the plan that provides the most efficient and dynamic transit hub and associated development that can be achieved without additional taxpayer subsidy, regardless of the final cost. Opportunities like Union Station come along once in a lifetime. We need to be bold and forward-thinking about the development of this important site, and find the resources to make it happen.