Everyone is certainly aware of FasTracks, metro Denver’s rail transit expansion program approved by voters in 2004 that will add 119 miles to our existing 35-mile rail system and position Denver as one of the nation’s leading cities in public transport. Based on a hub-and-spoke model, RTD’s post-FasTracks rail system will be well suited to shuttle passengers back and forth from Downtown Denver to the city’s outlying suburbs, DIA, and Boulder. It’s necessary, and I’m happy we’re doing it.

But, the time has come for Denver to invest in rail transit for its urban core. RTD’s post-FasTracks system will provide minimal utility to the 205,000 people who live within a three-mile radius of Downtown. Much of the RTD system runs along freight rail corridors and through industrial areas, not where Denver’s urban core population resides. Denver’s center city is well-served by bus routes, but busses can get stuck in traffic or stuck in snow, and they don’t provide the same quality transit experience that can be provided by streetcars. Because of the permanent infrastructure of streetcars versus the transiency of a bus line, streetcars can also stimulate economic development activity to a far greater degree than can bus routes. Streetcars are also more conducive to denser urban environments as they typically share a travel lane with vehicular traffic, as opposed to light rail, which typically runs in its own right-of-way. Here’s an example of a streetcar line in Portland, Oregon: 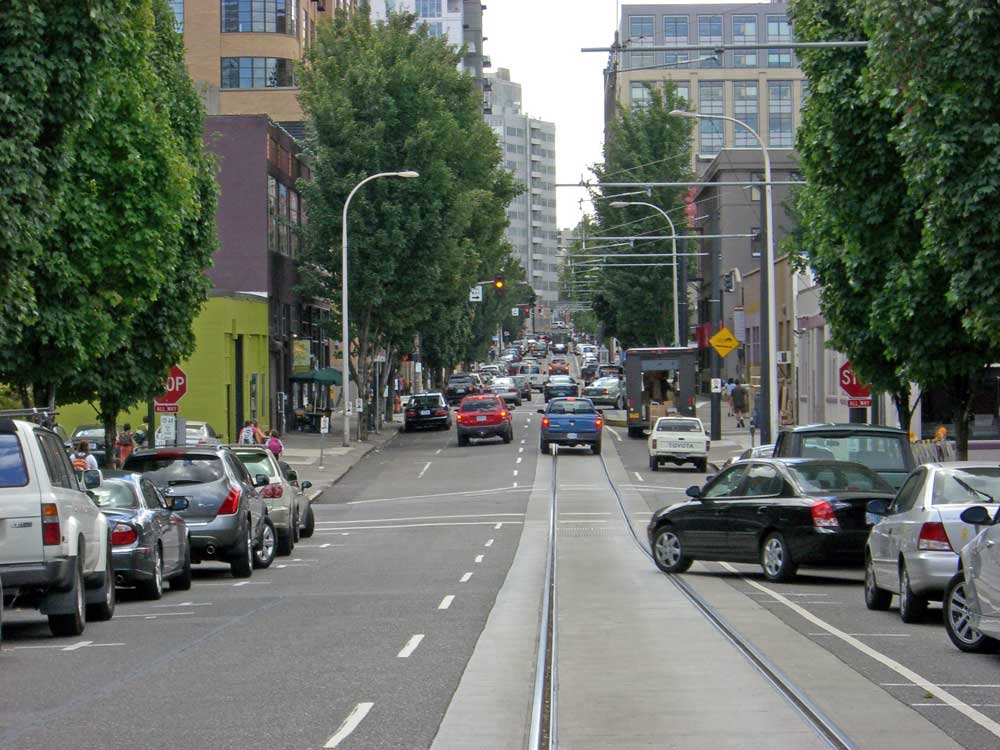 Denver once had one of the most extensive streetcar networks in the country. Denver’s system, which first started in the 1870s as horse-drawn streetcars, evolved into a fully electrified system that provided service to virtually every developed neighborhood in the city by the 1920s and 1930s. Of course, you can probably guess the rest of the story: by the 1940s we started replacing the streetcars with busses and, in June 1950, the last streetcar made its final run in Denver.

Just how extensive was Denver’s streetcar system? Using the Denver Tramway Company streetcar route map included in Robertson’s and Cafky’s tremendous Denver’s Street Railways, Volume II book (published in 2004 by Sundance Publications) as my guide, I’ve created this exhibit showing Denver’s streetcar system as it existed in 1926 (about when the system was at its peak) overlaid on top of a current Denver aerial: 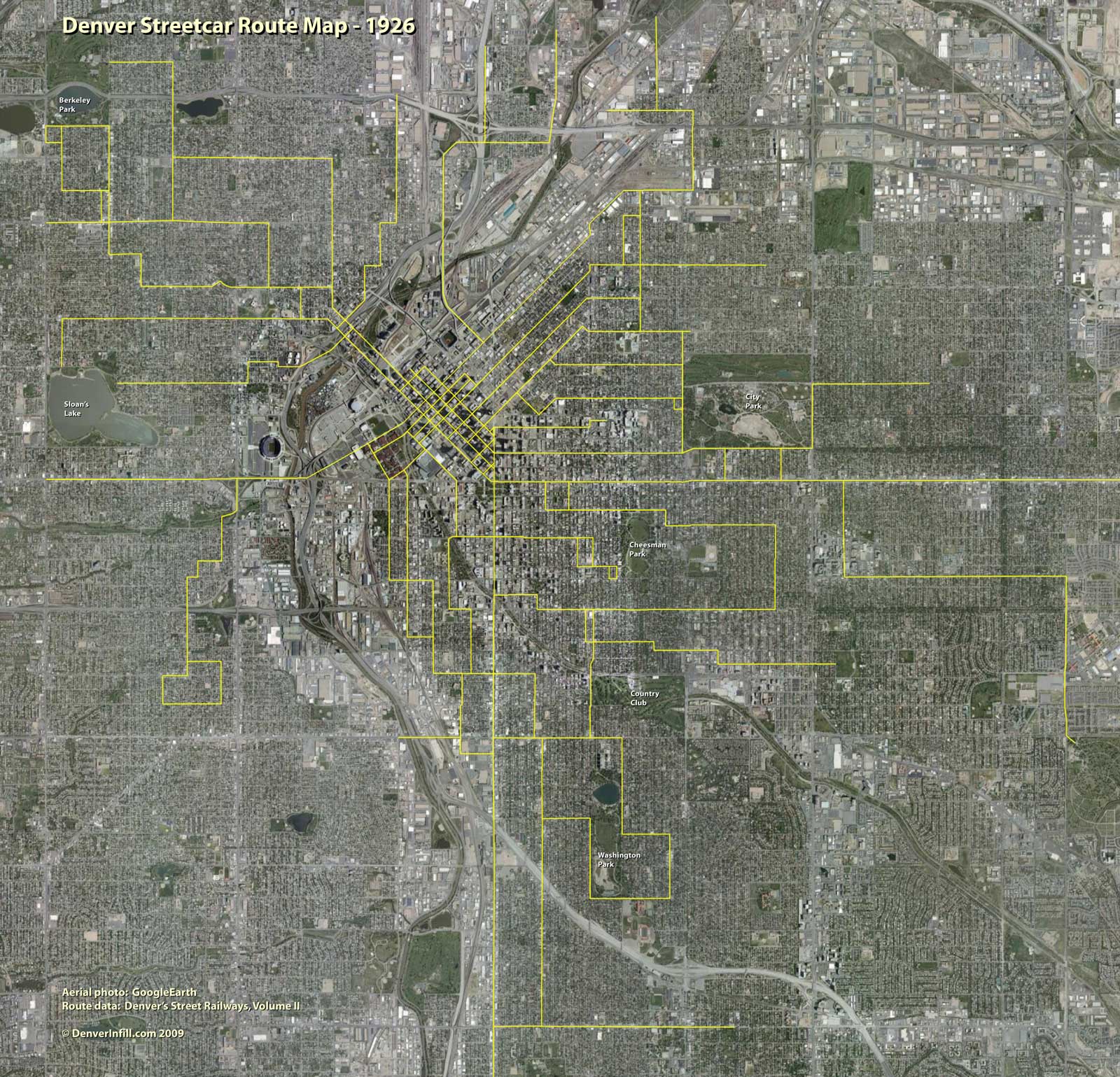 Incredible, huh? Plus, what’s not shown on the map are the “inter-urban” lines that ran to Arvada and Golden.

If you look closely, you can still find evidence of Denver’s streetcar system today as, in a number of locations, the rails were simply paved over and are sometimes visible through the asphalt, like this shot I took a few years ago at 14th and Delaware (I think it’s been paved over since):

So, what we should do is begin laying the foundation for a return to a streetcar system that serves Denver’s urban core districts by creating a Downtown streetcar loop from which additional streetcar lines could eventually radiate to places like Cherry Creek, Highland, Curtis Park, South Broadway, and elsewhere. Converting the proposed Downtown Circulator, which is planned as a mall-shuttle type bus that would travel between Union Station and Civic Center via 18th, 19th, Broadway, and Lincoln, to streetcars would be a good place to start. And like in Portland, our Downtown streetcar loop, along with the 16th Street Mall shuttle—also a potential streetcar conversion opportunity—should be part of a “fareless square” that enables free transit within the Downtown core.

Debating the alignment of the streetcar loop and subsequent extensions is the fun part; getting our first starter line in place will be the challenge. I’m convinced that RTD and suburban voters will not be in the mood to fund a Denver-centric streetcar system anytime soon. Consequently, if an urban core streetcar system is something Denver citizens want, then we’re going to have to pay for it ourselves. A couple-hundred-million-dollar bond issue and a 0.1% sales tax increase would probably get us started.