Today I’d like to share with you the first of several of my favorite photos that show the changes in Downtown Denver over the past fifty years. The photos generally focus on the western (Auraria and Central Platte Valley) side of Downtown.

This first image (used with permission from the personal collection of my friend, Rob Winzurk) is an amazing photo taken by his father in 1961. It is remarkable in that it shows several significant buildings that are no longer with us, all in one view, and in color. 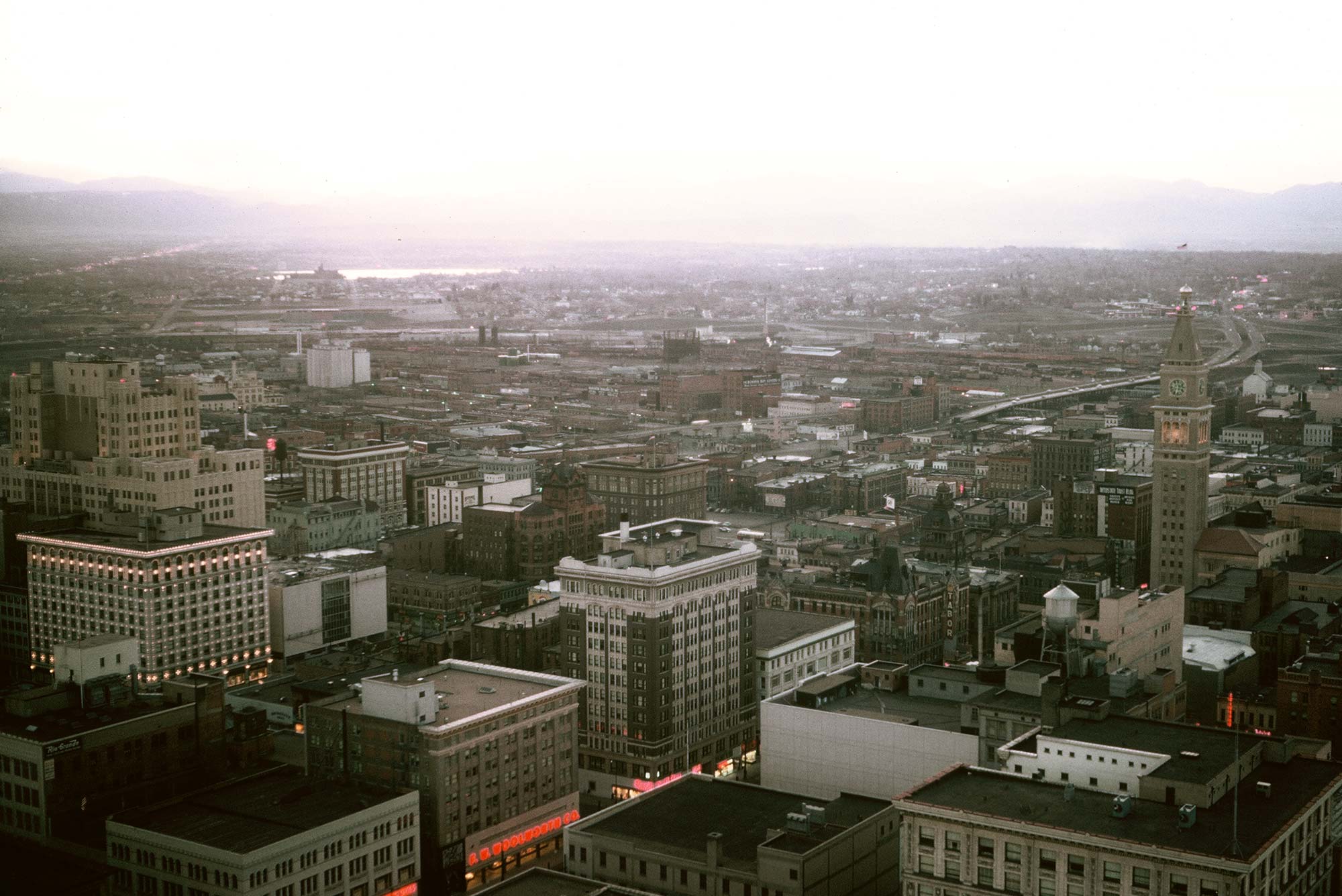 One block to the right of the University Building, at 16th and Curtis, is the Tabor Grand Opera House (linked photos courtesy Denver Public Library Western History Collection). Built in 1881, it was one of the finest and most elaborate opera houses in the country. It featured a 1,500 seat auditorium and a grand atrium lobby capped by a stained-glass rotunda. Next to the Tabor Grand at 16th and Arapahoe is the Post Office and Customs House Building, built in 1885.  Both buildings were demolished in 1964, three years after this photo was taken, to make way for the Federal Reserve Bank, completed in 1968, which now occupies the entire block. Here’s a zoom-in of those two buildings: 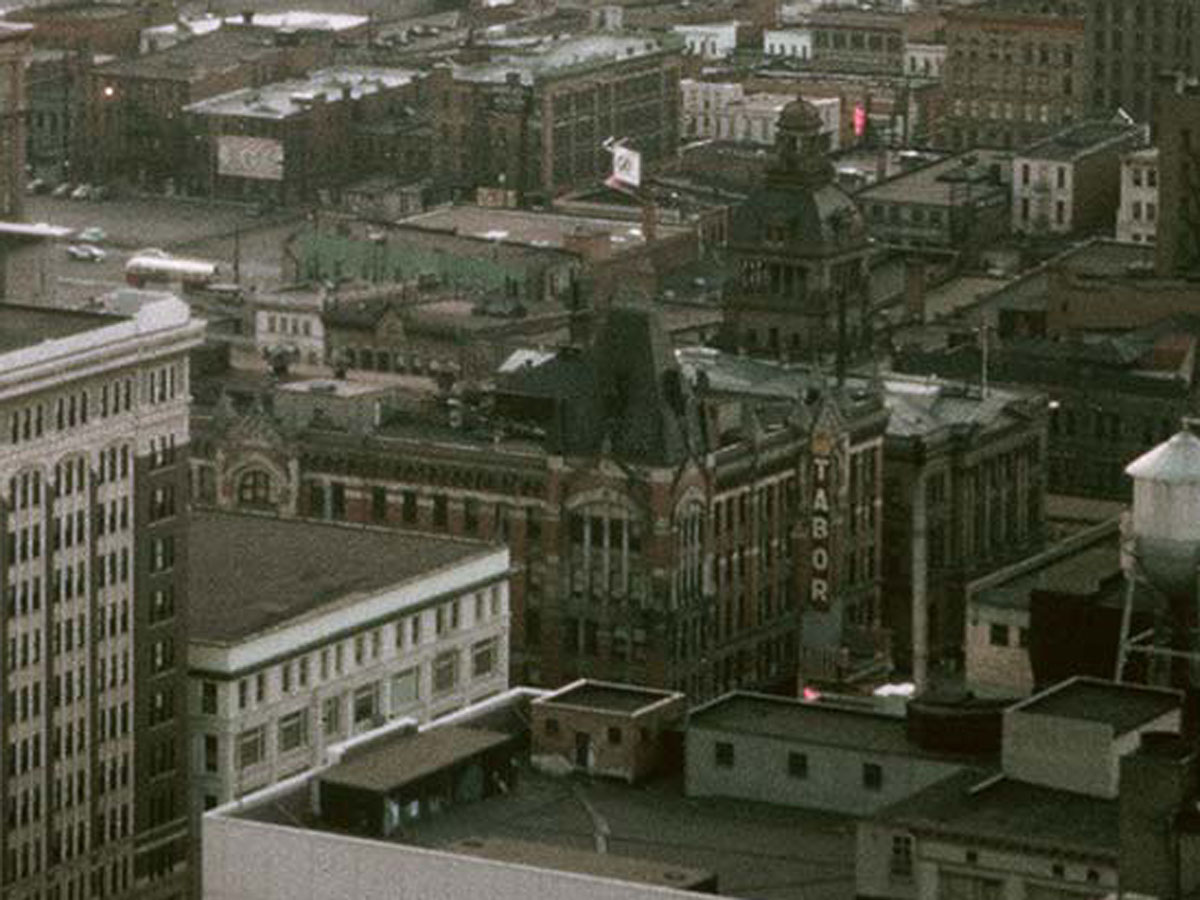 Directly above and behind the University Building are two buildings at the corner of 15th and Arapahoe: the Mining and Exchange Building on the left, and the Central Bank Building on the right. The handsome Mining and Exchange Building was built in 1891 and featured a statue “The Old Prospector” at the top of its spire. The building was demolished in 1963, two years after this photo was taken. Brooks Tower took its place, and The Old Prospector now rests in the plaza at the entrance to the tower. The Central Bank Building opened in 1911 and featured a beautiful curved brick facade and two-story columns at the corner entrance.  The building was a victim of the late-1980s real estate bust. The pathetic story went something like this: The Central Bank Building went into foreclosure and was sold as part of a portfolio of real estate assets to some British firm, which was in financial trouble itself and was involved in a complex lawsuit with a bunch of banks and insurance companies. The British firm eventually decided that one way to help improve its financial position was to “eliminate” some of their troubled assets. Despite valiant efforts by Denver’s historic preservation community to save the Central Bank Building (it was declared a Denver Landmark in 1988), the overseas firm apparently didn’t give a crap about the historic importance of some building in Denver, Colorado, and, in 1989, submitted a demolition permit to the city. At that time, the city could legally delay a demolition permit for only ninety days, during which Mayor Peña pleaded with the firm to spare the building. Ninety days later, in front of a crowd of protesters, a demolition crew smashed the building to bits. Today, the site is a parking lot. Had the Central Bank Building survived however, it would now share its southwest common wall with the parking garage of the new Four Seasons. Here’s a detailed view of those two buildings: 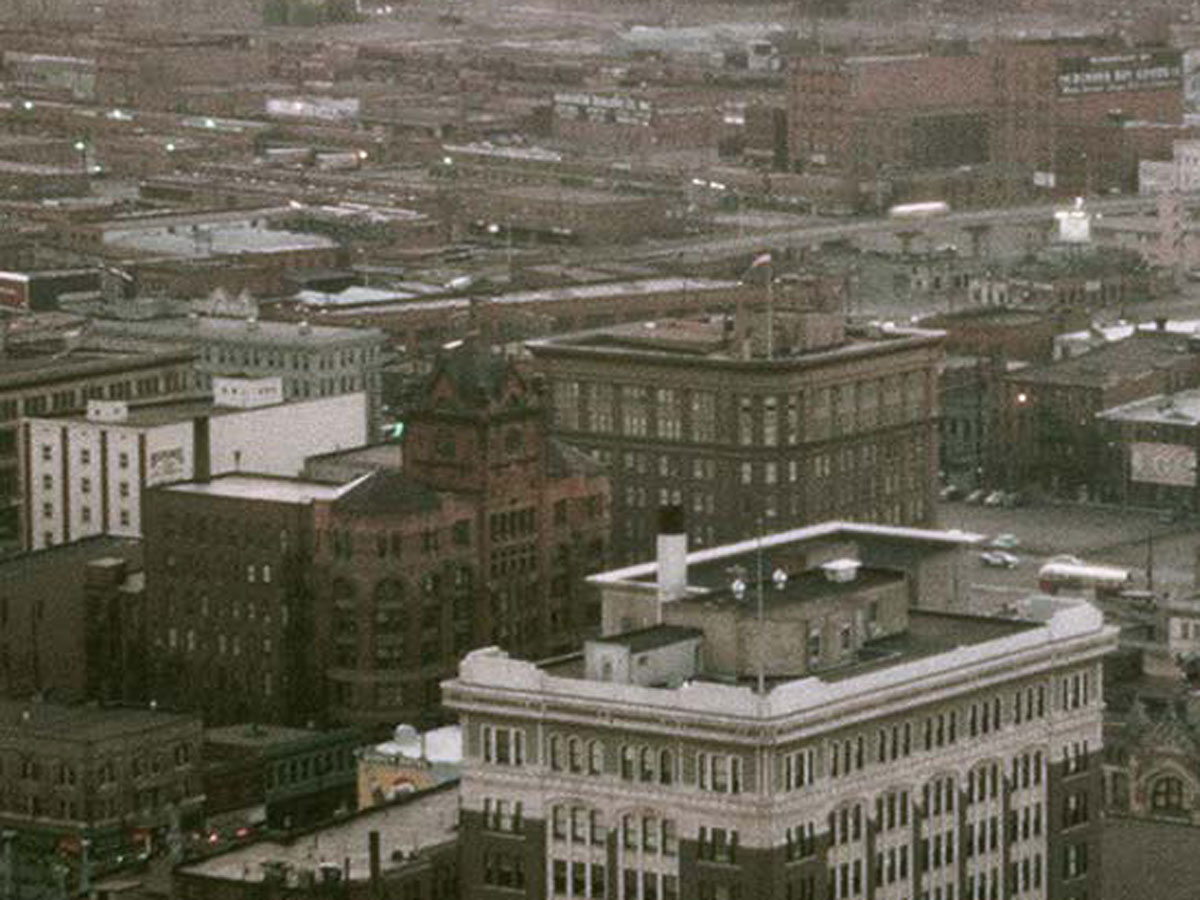 Of course, there are other buildings in this 1961 photo that are no longer around, such as the department store once attached to the D&F Tower, and other nearby buildings that were replaced in the 1970s and 1980s by the Tabor Center, Writer Square, various shiny office towers, and surface parking lots. Behind the D&F Tower, the old Speer Viaduct (also known then as the 13th and 14th Street Viaducts) heads west to interchange with the “new” Valley Highway. Farther in the background, rail yards and industrial buildings cover the Central Platte Valley where the Pepsi Center and Elitch’s now stand and, to the left, the white painted Tivoli Brewery is surrounded by its pre-campus Auraria neighborhood. Finally, Sloans Lake shimmers in the distance, with the silhouette of Lake Middle School clearly visible in front of it and, in between the school and the white boxy industrial building below, is the profile of the one-deck-high Bears Stadium.