This past week I was in Albuquerque for a conference, so I took the opportunity to explore their downtown area and take a few photos.

Downtown Albuquerque basically has two areas that provide a sense of place:  Civic Plaza, a two-block public square, and Central Avenue, a four-block stretch of shops and restaurants. Here is a bird’s eye view of Downtown Albuquerque with 3D buildings from GoogleEarth (click to embiggen): 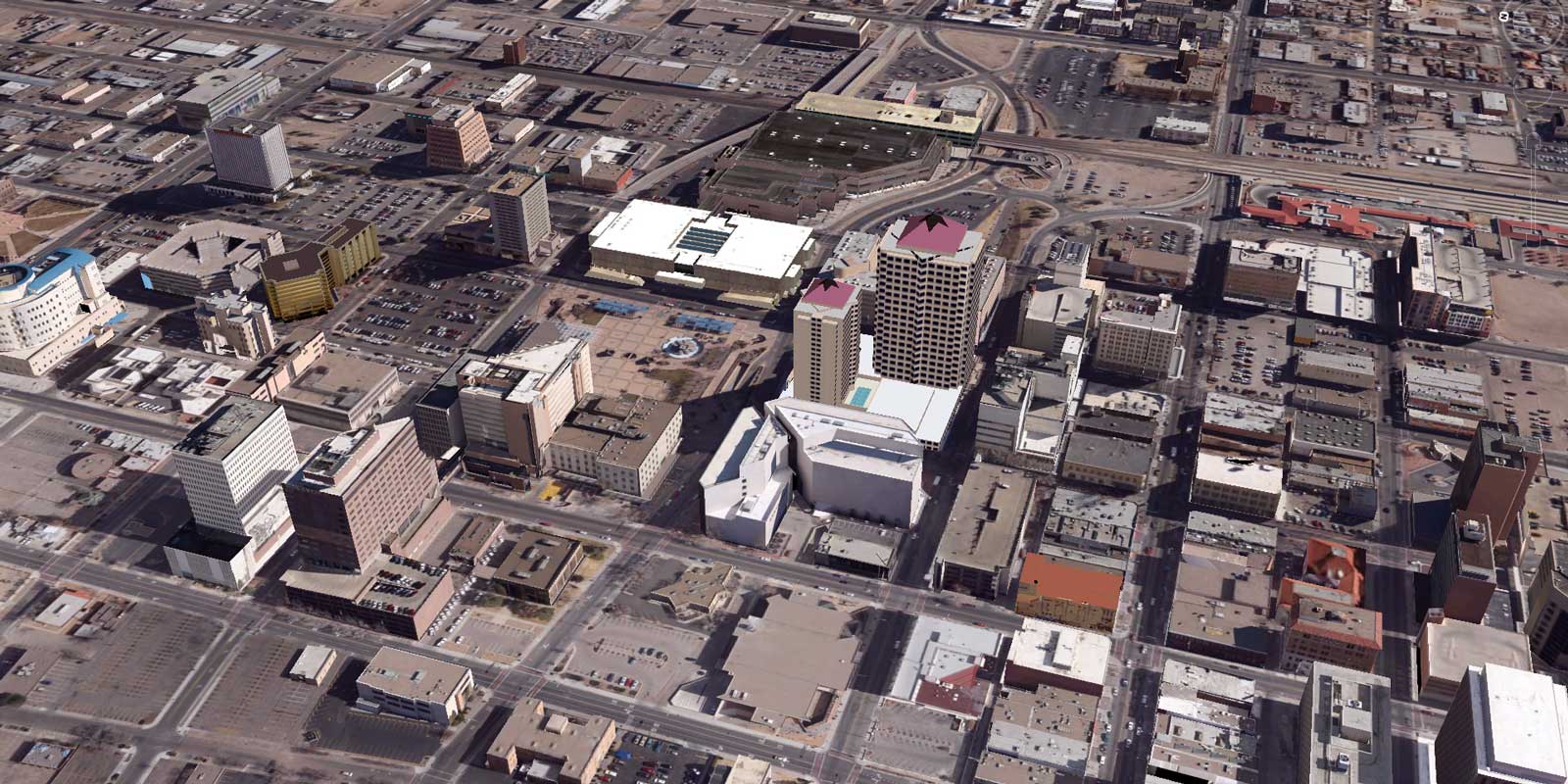 The Civic Plaza is just left of center with the Albuquerque Convention Center behind it. The two red-roof towers in the center are the Hyatt (where I stayed) and a companion office building. Central Avenue is a block to the right of the hotel/office complex.

Civic Plaza is a hardscaped public square that was noticeably lifeless (except for a few homeless people) during the five days I was there. Granted, it’s the middle of the winter and there were no programmed activities held during my visit, but I suspect Civic Plaza is usually like that even in the summer unless there’s a festival or a convention going on. The Plaza is ringed by the Albuquerque Convention Center, the Hyatt, some government buildings, and a surface parking lot. Looking over the Plaza from the hotel:

The Plaza does have some interesting elements. There’s a parking garage underneath the Plaza (note the ramps in the foreground of the photos above), as well as a large fountain (not operating when I was there), a performance stage, and various other urban design features. Here are a few shots from within the Plaza:

I found that with all the hardscaped surfaces, the lack of vegetation, and the harsh modernist architecture of most of the buildings nearby, that Civic Plaza didn’t feel like it was a very comfortable place to hang out in. Perhaps when the fountain is on and there are street vendors and other activities going on, it becomes a lively public space. Does anyone have any experience with Albuquerque’s Civic Plaza in the warmer months?

Next is Central Avenue, which is part of the legendary Route 66 highway. The four-blocks of Central Avenue between 3rd and 7th streets offer a nice “main street” environment with a variety of retail and restaurant establishments. Unfortunately, all the photos below were taken on a Sunday morning when virtually nothing was open and no pedestrians were around… forgive me, but that’s the way it worked out.

There were a lot of empty retail spaces, and all those barred-up storefronts just leave you feeling all warm and fuzzy, don’t they?! Apparently crime is an issue in Downtown Albuquerque. In fact, the hotel where I stayed gave me a map of the downtown area, and on it was this big note that said in so many words “DO NOT WALK AROUND DOWNTOWN ALBUQUERQUE AFTER SUNSET!”

While I was there I also went to Old Town and to Nob Hill—two areas outside of downtown with some interesting urban character—but I didn’t take any photos.

Overall, downtown Albuquerque has several examples of nice urbanism, but a few issues it needs to overcome as well. But then, what city doesn’t?