The blog today was written by Caroline Tracey, a college student from Denver in the Urban Studies program at Yale University. She contacted me and offered to research and author a blog post for DenverInfill. Around the same time, I was contacted by John Brown, a Professor of Architecture at the University of Calgary, who suggested a great design topic for this blog. I put the two of them in contact with each other and… here we go: Caroline’s well written blog article on John’s Slow Home project. Thank you both for your contribution.

Do you live in a fast house or a slow home?  Do you know how to tell the difference?  Though everyone reacts to design intuitively, most people do not know how to interpret it, or understand how it affects them.  If you have felt allured by design but unable to understand its language, Slow Home has an antidote for you.  And it has arrived in Denver.

Brown came up with the idea of a “slow home” during a conversation about the Slow Food movement with his sister, a chef. He found that the more he developed the analogy, the more it seemed appropriate to explain the current housing industry in North America.  “I started to tell my clients,” he says, “that houses in suburbia are the fast food of housing – all standardized and homogenized.”  In the same way that Slow Food considers the source of ingredients, their composition, and the act of preparing meals, Brown’s Slow Home Project intends to raise awareness about the sourcing of materials for homes, the decisions that go into the design of a home, and its workmanship.

So what does the project do? At is foundation is the Slow Home Test, which Brown describes as a tool that gives people a skill set through which to understand design and evaluate design quality.  Fourteen indicators are weighted to add up to a possible twenty points.  Points are earned in the categories, “the house in the world,” “the house as a whole,” and “room by room.” Continuing the analogy of Slow Homes to Slow Food, Brown says, “until we knew about trans fats, we didn’t have a language to talk about the problems they cause.”  The understanding of the language of design afforded by the test allows it to be a tool to influence consumers’ buying decisions and to understand what could be improved in one’s own house.  It allows consumers to be educated about how to “vote with their dollars.”

Next, Brown took Slow Home on tour.  This is where Denver comes in.  Brown recognized a “sizeable online community” at theslowhome.com, and decided to put it to work surveying design in nine large North American cities.  Denver follows Los Angeles, Toronto, and Dallas.  Members of the online community evaluate floor plans of new houses in each city using the Slow Home test, in order to create a data set about the quality of new home design in the cities.  So far, 2,100 homes, in the categories apartments/lofts, townhouses, and single-family detached homes, have been evaluated.

The preliminary results about Denver “are essentially an inversion of the results from other cities,” says Brown.  In the apartment/loft and townhouse categories, the percentage of plans meeting Slow Home’s minimum design quality standards is lower than in other cities.  But in the detached single-family home category, in which the percentage meeting the minimum standards – thirteen out of twenty points on the test – is generally the lowest, Denver’s results are higher than other cities.  More than forty percent of new single-family homes surveyed meet minimum design standards.  Eleven percent meet standards to be considered a “Slow Home,” which Brown says is an impressive fraction – to be considered a “Slow Home,” a home must earn seventeen of twenty possible points on the Slow Home Test.  It must be well designed inside, well located, and meet environmental standards.  Seven percent of single-family homes in Dallas were “Slow Homes,” and just three percent of those in Toronto.  And Miami? “Miami is just out to lunch,” says Brown. 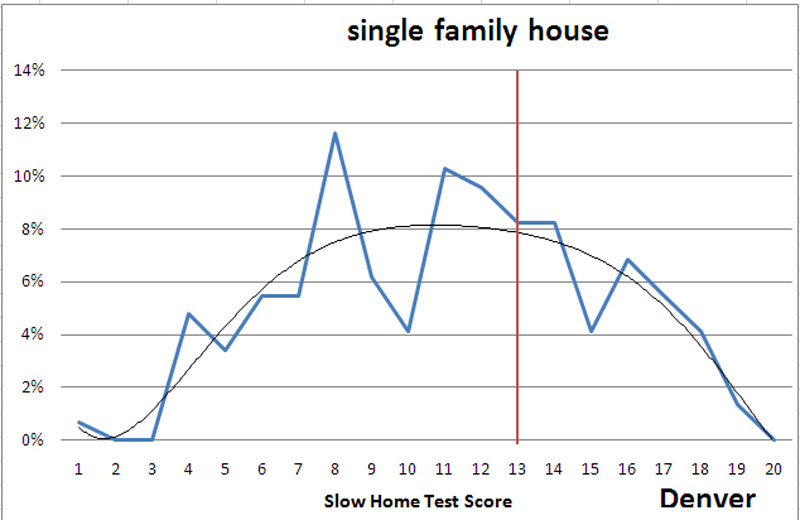 Brown attributes Denver’s higher quality of design of single-family homes to a citywide interest in the environment and in community.  There are several urban renewal projects in the city that are doing well, he adds, including the redevelopments of Lowry and Stapleton.  Whereas “in other cities, all the new single family houses are way out in the suburbs where no one cares about them,” these projects in Denver are closer to the center of the city, and are under more scrutiny than new suburban projects.  Their design was considered more carefully, and in turn they score higher on the Slow Home test, shifting Denver’s results towards slowness.

Brown asserts that where we choose to live affects our lives.  To illustrate this point, he turns to an analogy about shoes: “wearing a pair of shoes that doesn’t fit is unpleasant – it makes your life harder, not better.”  In the same way, buying a house that has a “large unused front living room, a garage that blocks the whole front of the house so that there’s no natural sunlight, or that requires you to commute two hours each day” will not improve your quality of life.  Brown hopes that Slow Home’s design education tools will allow consumers to demand better design.  It values not expensive design, but simple, intuitive considerations by developers.  “People who understand design will refuse to buy a house without front entry closets, bedrooms with natural light, or a walkable neighborhood,” he says.

“There are people doing good work,” he continues; and with the right tools, “people will see the differences.  It’s not about telling people they’re living the wrong way, it’s about providing entertaining, educational tools to be a more informed consumer.”

Anyone can join the entertainment and education at theslowhome.com, where Brown posts daily video design exercises including analyzing and comparing floorplans and voting for the Slow Home awards for the surveyed cities.  The Slow Home awards for good new design in Denver are viewable at http://theslowhome.com/slow-home-project/denver-wrap-up/#comments.  WashPark Green, the winner for a single-family home, is pictured below. 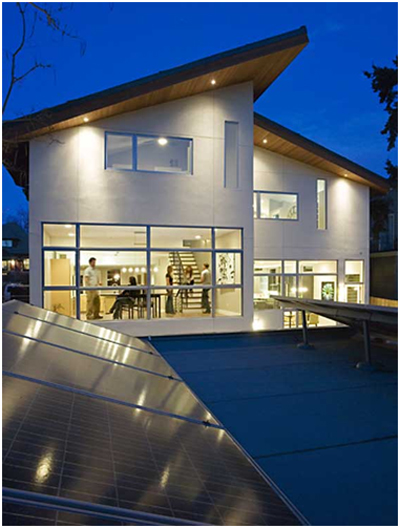