Obviously transit is playing a larger and larger role in the metro area, so I think it’s only fitting that my very first transit post is an overview and status update of one of the largest transit expansion programs in the country. I’m sure most of us know the basics, but hopefully there’s some tidbits in here that’ll be new info.

RTD FasTracks is metro Denver’s $6.5 billion regional transportation expansion program made up of nine rapid transit corridors, 31 new park-n-Rides, the redevelopment and reconfiguration of Denver Union Station (DUS) into a truly multimodal transit-oriented development, and the enhancement of the bus network and transit hubs across RTD’s district. The FasTracks program will include 122 miles of new light rail and commuter rail, 18 miles of bus rapid transit (BRT), 21,000 new parking spaces at rail and bus stations and enhanced bus service across the District. See the map below for an idea as to FasTracks’ reach. 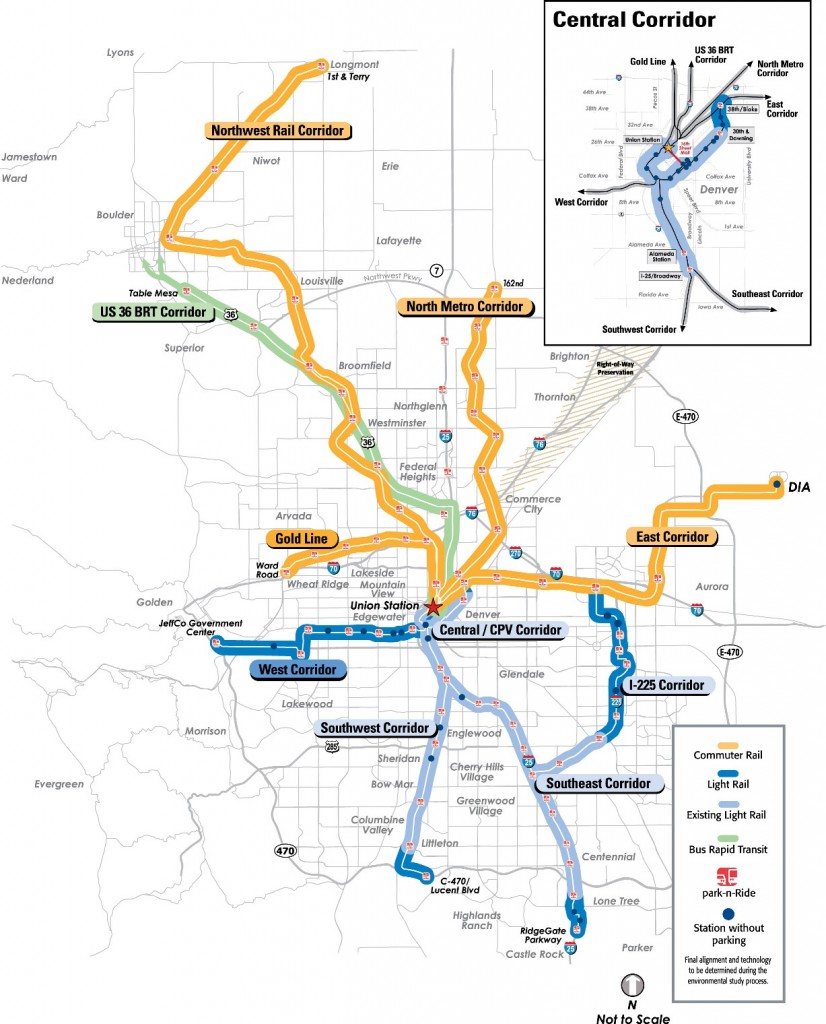 FasTracks is made up of several different components. The following transit corridors make up the RTD FasTracks program:

East Corridor: $1.2 billion commuter rail line connecting Downtown Denver and DIA along a new 22.8-mile corridor. The new rail line will serve east Denver and Aurora on its way to DIA. This project is part of the Eagle P3 project, one of the first transit projects to utilize a public-private partnership (PPP) in the country. (Info on the P3 project is coming in a future blog post)

Northwest Rail: $665 million commuter rail line connecting Downtown Denver, Adams County, Westminster, Broomfield, Louisville, Boulder, and Longmont along a new 41-mile corridor. The commuter rail will run along the same tracks as frequent freight rail service. An initial segment from DUS to 71st and Lowell will be completed as part of the P3 project.

North Metro: $910 million commuter rail line connecting Downtown Denver, Adams County, Commerce City, Northglenn, and Thornton along a new 18-mile transit corridor. The right-of-way for the majority of this corridor has already been acquired by RTD.

I-225 Corridor: $626 million light rail line traveling along I-225 through Aurora from the existing Nine Mile Station north 10.5 miles to the future Peoria/Smith Station along Aurora’s western border with Denver. The corridor will service Aurora’s Municipal Building, the Aurora Town Center, as well as the Anschutz Medical Campus (formerly the Fitzsimons Army Medical Center).

US 36 BRT: $23.3 million (Phase 1) project to enhance transit service along the US 36 Corridor between Denver and Boulder. Phase 1 projects included expanded park-n-Rides, pedestrian bridge construction, and installation of slip ramps along the highway. Phase 2 is dependent on CDOT action along the highway.

Since the FasTracks vote in 2004, the program has encountered a number of challenges that are outside of RTD’s control (or anyone’s control for that matter)—namely an increase in the cost of construction materials (concrete, steel, and copper) and a significant decrease in sales tax revenues. Due to these economic challenges, it will require additional revenues from what was originally planned to complete FasTracks in the timeframe promised in 2004. FasTracks is facing a $2.45 billion budget gap brought on by a combination of rising commodity prices and declining sales tax revenues, which are the backbone of its funding mechanism. If RTD does decide to pursue a new sales tax increase, it would take an additional 0.4% (on top of the original 0.4% for FasTracks and 0.6% for general RTD operations) to fill the funding gap. Any new tax would include a sunset provision.

To deliver the program within the next 10 years or so, RTD will need to solve the gap between the project cost and the available revenue brought in by sales tax and other sources. Despite of the budgetary challenge, RTD says they’re committed to delivering the program by 2019. In spite of the challenges brought on by unforeseen economic forces, RTD has been able to initiate construction on several major components of the FasTracks program. The West Corridor broke ground in 2008 with major construction commencing in 2009 and will open for revenue service in early 2013.

I know Rick’s got it covered, but as we all know, DUS broke ground on major reconfiguration and redevelopment activity in March, following a loan package from the Federal Railroad Administration (FRA), Federal Transit Administration (FTA), and United States Department of Transportation (DOT). The entire $500 million reconfiguration is expected to be complete and open for service in 2015.

The RTD Board of Directors selected Denver Transit Partners (DTP) in June as their P3 Concessionaire to deliver commuter rail service to DIA along the East Corridor, Arvada and Wheat Ridge along the Gold Line, Westminster along Northwest Rail, and a new commuter rail maintenance facility. Groundbreaking for the East Corridor is expected sometime in August, with groundbreaking of other P3 components later next year.

It’s a HUGE project with HUGE potential to really transform how metro Denver moves. It’s great to see the progress that we’re already seeing—every new project is a big step in the right direction. Let’s hope that the complicated budget situation is resolved soon so they can get these trains running!