As construction on the West Corridor nears the halfway mark (completion is expected in May 2013), I thought it’d be a good idea to check out progress along the first FasTracks corridor. Much of the construction (with the obvious exception of the work along 6th Avenue) is taking place in existing neighborhoods, usually not too noticeable from nearby thoroughfares. The 12.1-mile light rail corridor will have 12 new stations (with 4,959 new parking spaces), and offer 5 minute peak period headways from the Federal Center to Denver Union Station (DUS) and 15 minute peak/offpeak headways from the Jefferson County Government Center to DUS. 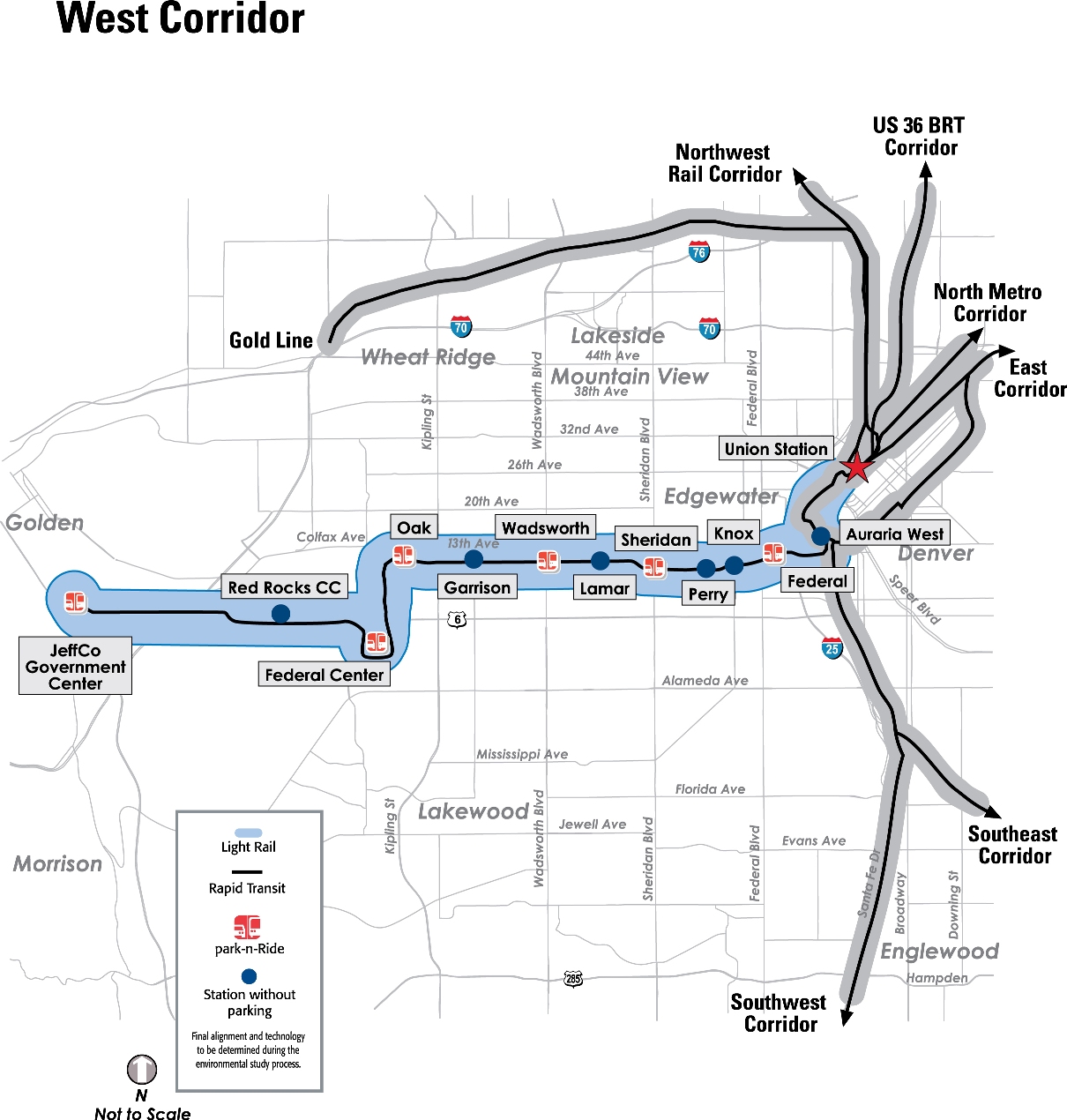 We’ll take a look at the West Corridor in 3 zones. Zone 1 spans from DUS to the Sheridan Station. Zone 2 goes from Sheridan to the Denver Federal Center Station, and Zone 3 travels from the Federal Center to the Jefferson County Government Center end-of-line station. Today, we’ll look at Zone 1.

Rick is doing an awesome job keeping us up to date on all that’s going at DUS, so I won’t touch on that other than to say that the West Corridor will start at the new light rail station along the Consolidated Mainline (CML) tracks. From there, the corridor will follow the existing Central Platte Valley (CPV) spur through the Pepsi Center/Elitch Gardens and Invesco Field at Mile High stations. The only changes anyone will see at these two stations will be an extension of the platforms to service four car trains. Platforms along the Central and Southwest Corridors will all be extended to offer four car train service – the Southeast Corridor platforms were constructed long enough for four car trains. The West Corridor (and subsequently the I-225 Corridor) will be constructed to a four car length as well.

The Auraria West Station will be moved about 400 feet west of its current location to realign for the bridge over the Burnham Yard lead freight tracks. As you can see below, construction on the new station is well underway. 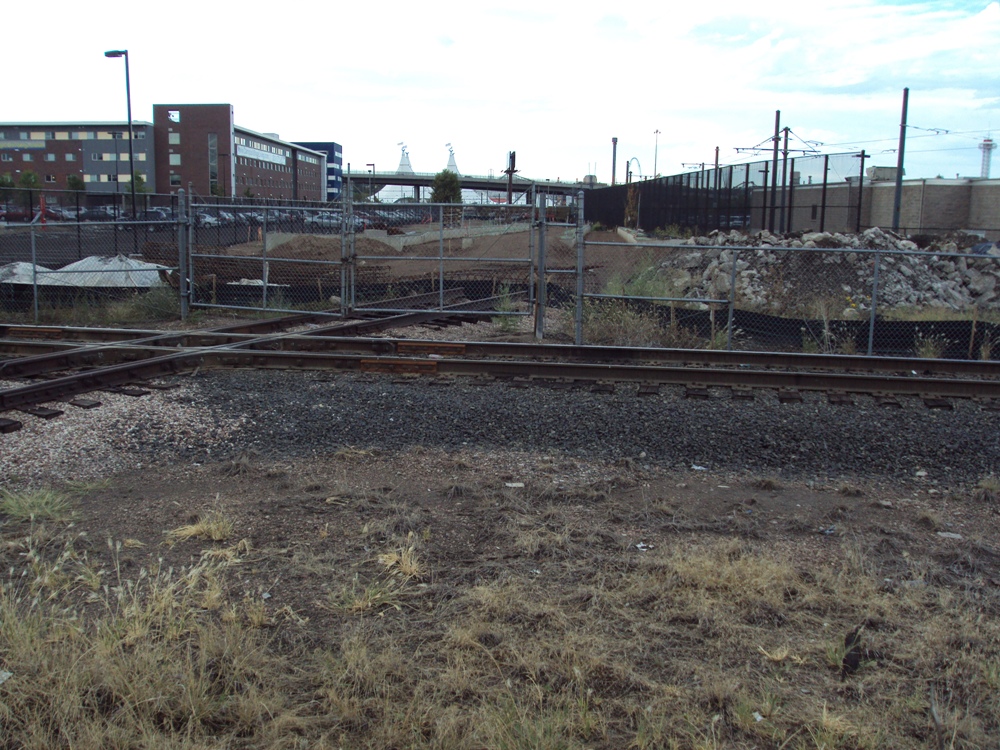 From the Auraria West Station, trains heading south will stick to the east and travel towards the existing Colfax Junction. However, trains heading west will travel underneath the Colfax viaduct, climb onto a large bridge over the CML tracks and over Umatilla, then move underneath I-25 just north of 13th Avenue. Crews have started placing massive steel girders along the 770 foot, double track bridge. The bridge is designed with a 300 foot radius, requiring the light rail trains to slow to a maximum of 20 mph. Curved bridges tend to want to twist between supports as trains pass over, so a system of cross frames and bottom-flange lateral bracing was used to stiffen the bridge and help transfer loads. There are five spans, the longest reaching 180 feet. The bridge will require 60,000 cubic feet of concrete and 400,000 pounds of reinforcing steel. The bridge, when complete, will weigh 9.4 million pounds. 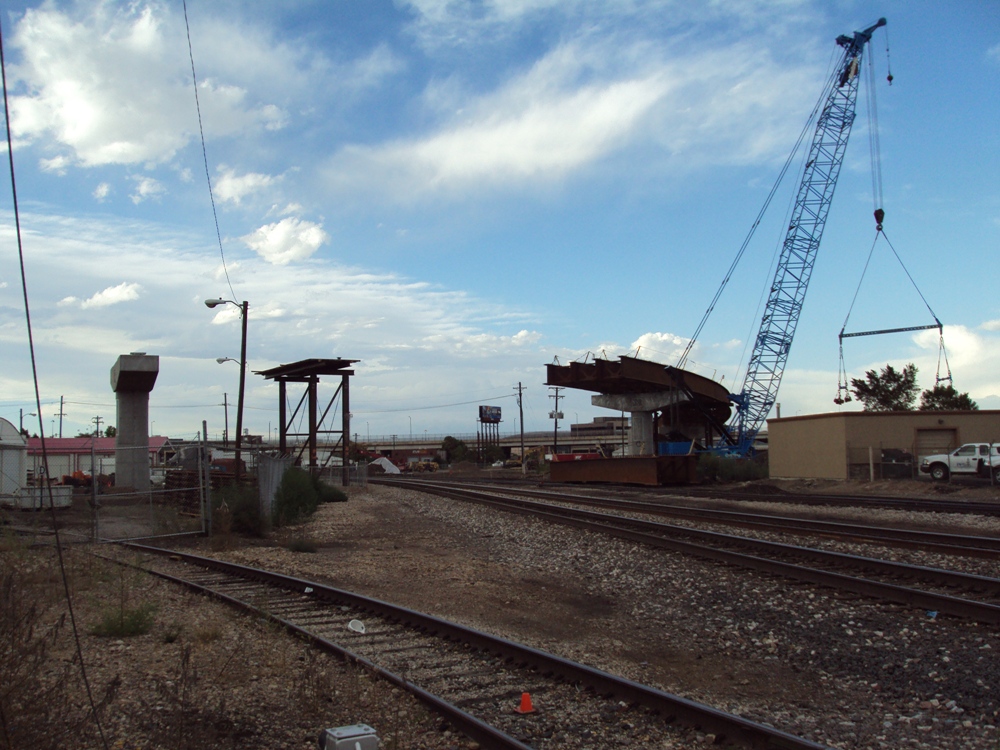 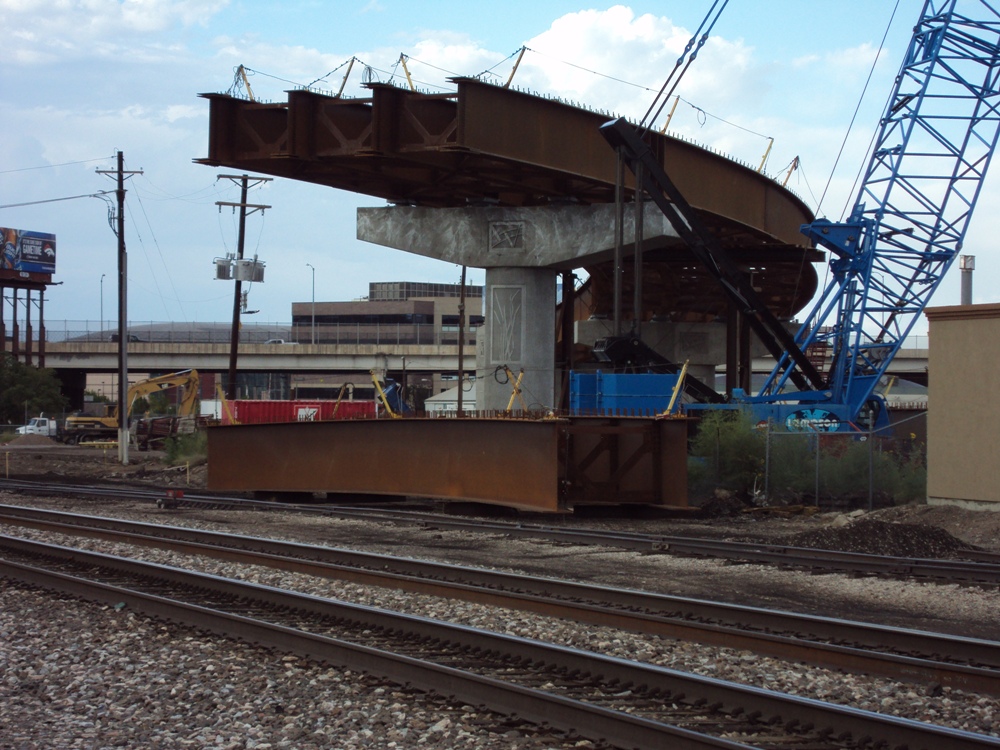 The tracks will then travel over the Platte River just north of the power plant and south of the Denver Public Works facility at Decatur and Howard. The Decatur Station will be located just south of 14th Avenue between Federal and Decatur. Crews have already completed the bus bays for the future station and are storing other construction materials on site. 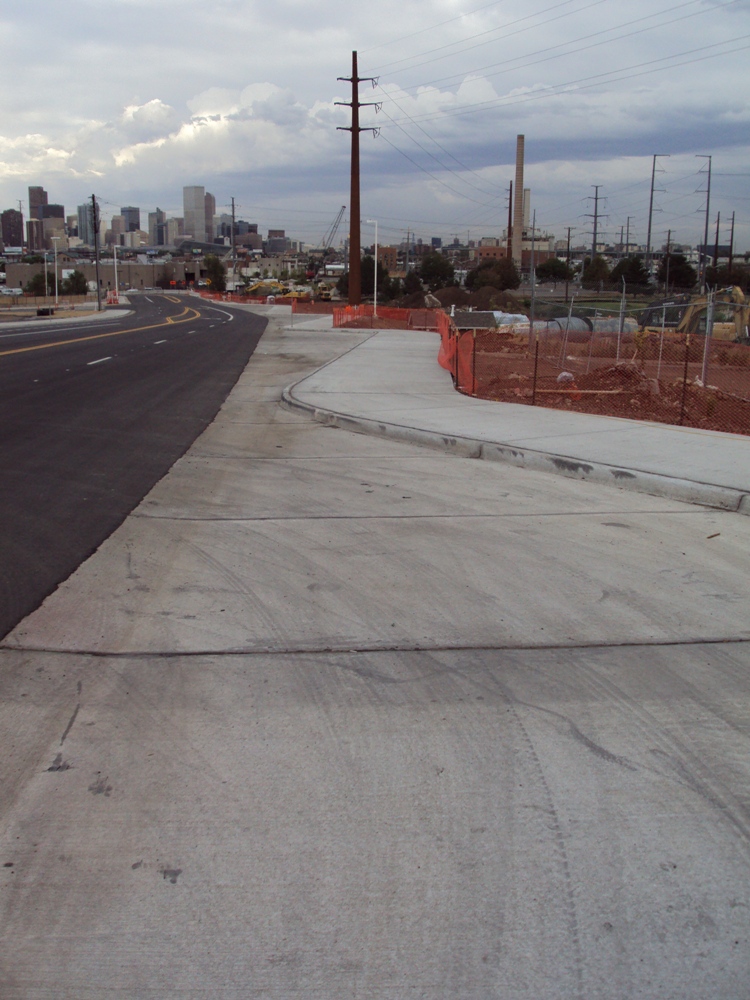 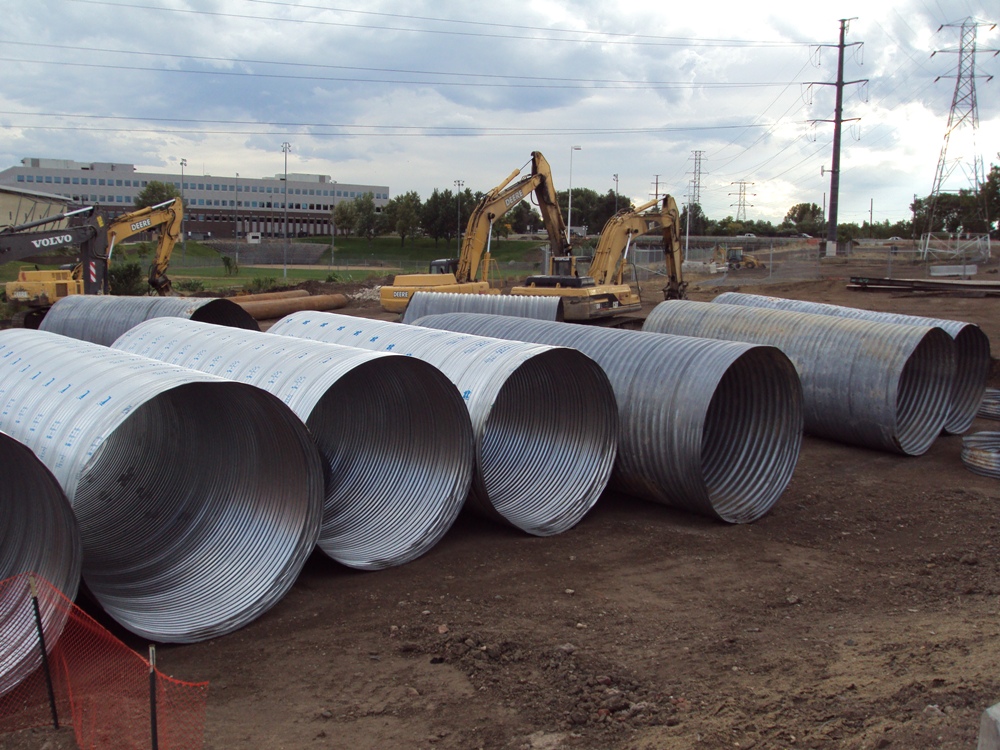 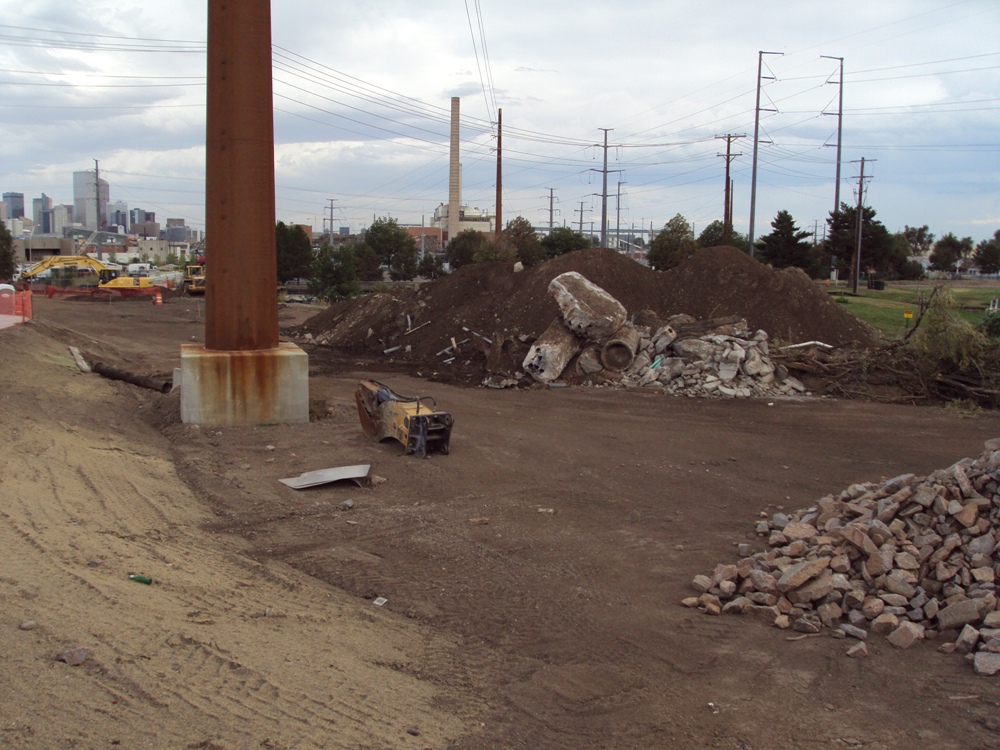 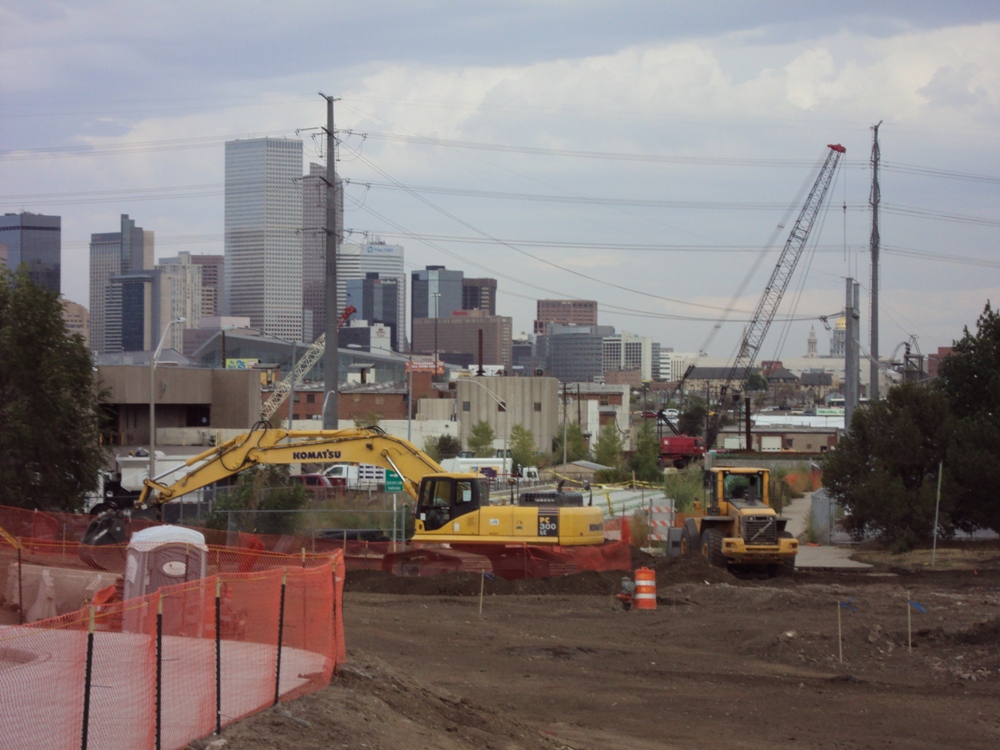 As part of the West Corridor project, the Federal Boulevard bridge is being reconstructed for the Colorado Department of Transportation. The bridge was one of the worst in the entire state, rating only a 4 on a scale of 100.  The girders used on the new bridge are pre-stressed to handle 50 million pounds of force. The new bridge will be 119 feet wide, enough for three lanes of traffic in each direction and a southbound bus lane. 10 foot sidewalks will also be included on either side of the bridge for bicyclists and pedestrians. The new three-span bridge will weigh 8.5 million pounds. Both directions of Federal were recently moved onto the new southbound section while demolition and subsequent construction of the northbound span gets underway. The pictures below show the contrast between the new southbound span and the old northbound span. 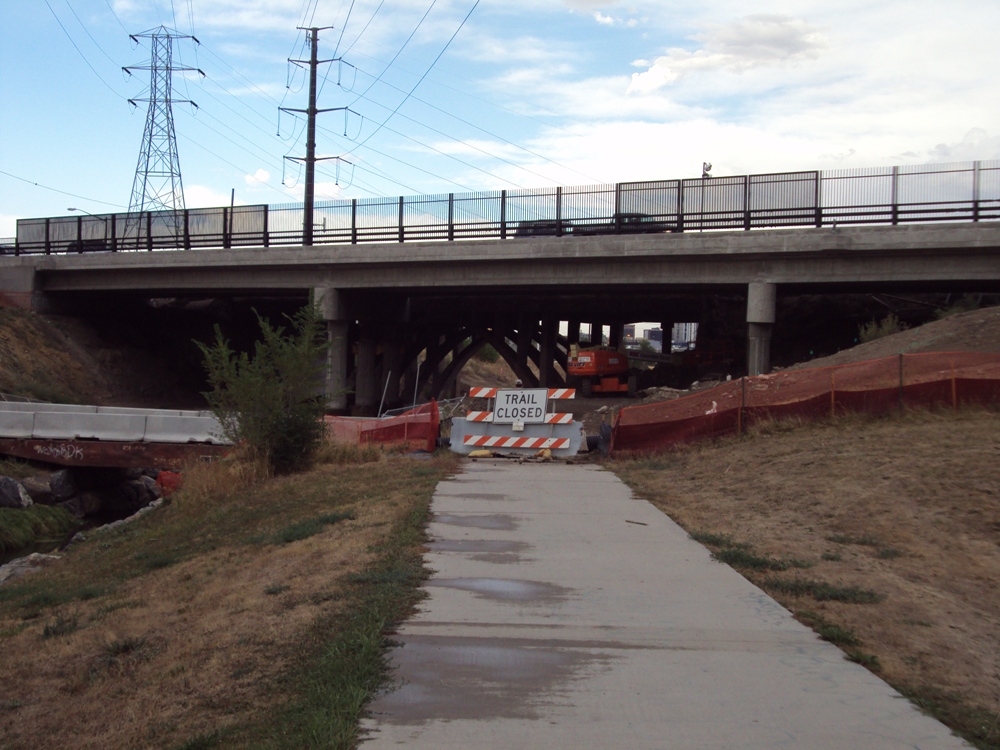 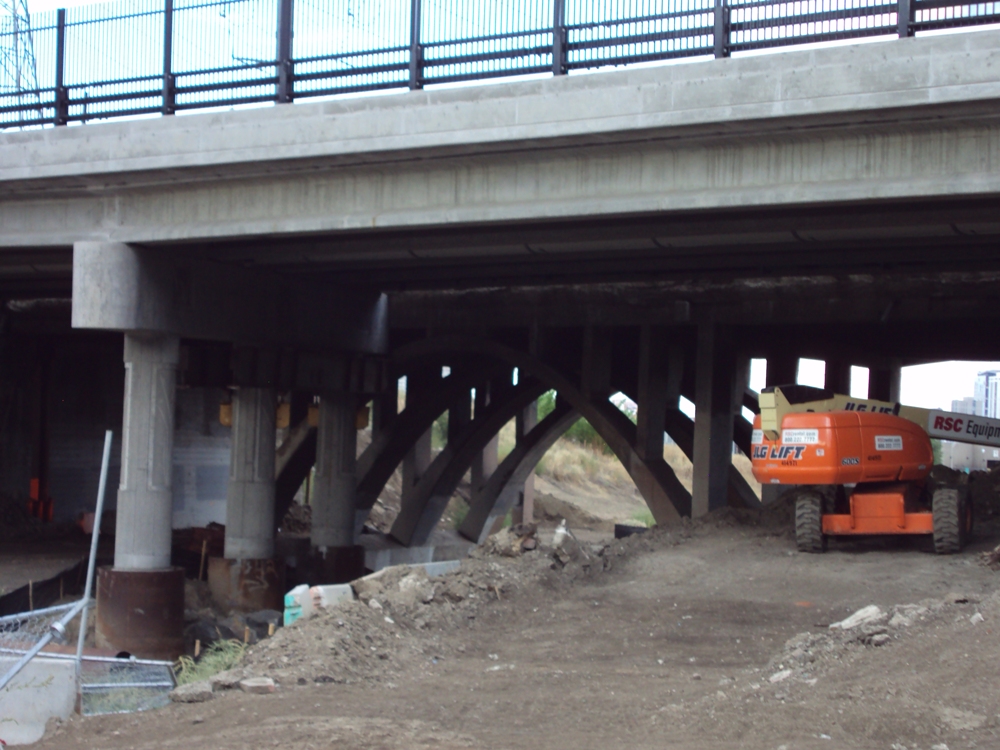 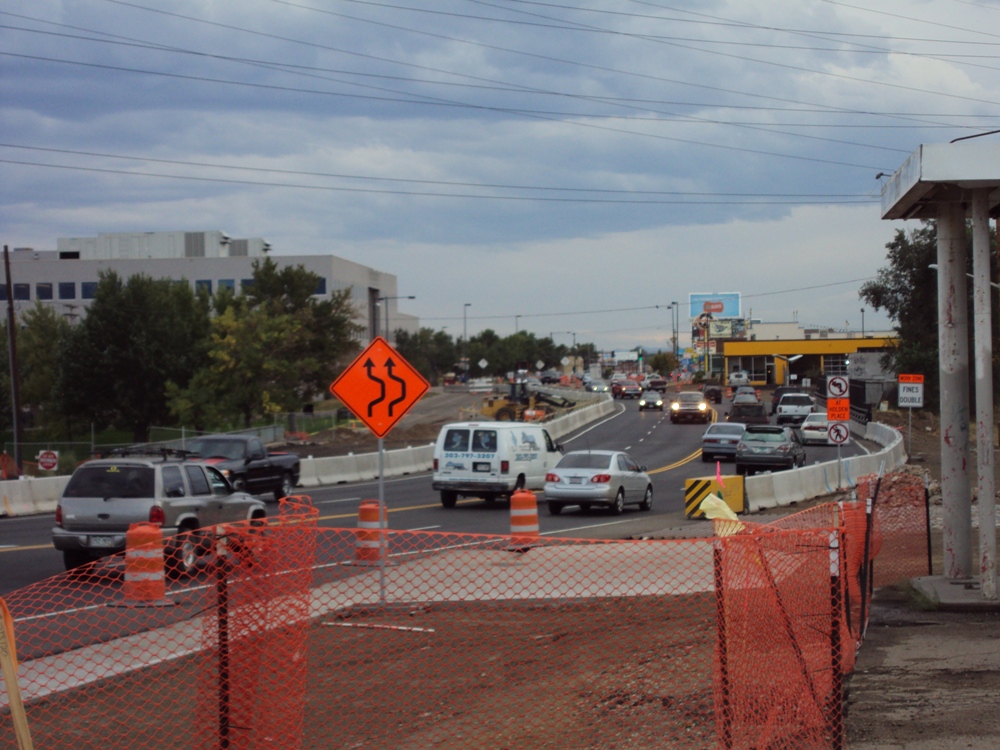 There are three pedestrian bridges along this section of the corridor as well, helping nearby residents cross over the tracks as well as the Lakewood Dry Gulch. The bridges are at Wolff Street, Hazel Court, and Tennyson Street. The Hazel Court bridge will be site of a celebration next Wednesday to mark the halfway point in West Corridor construction. 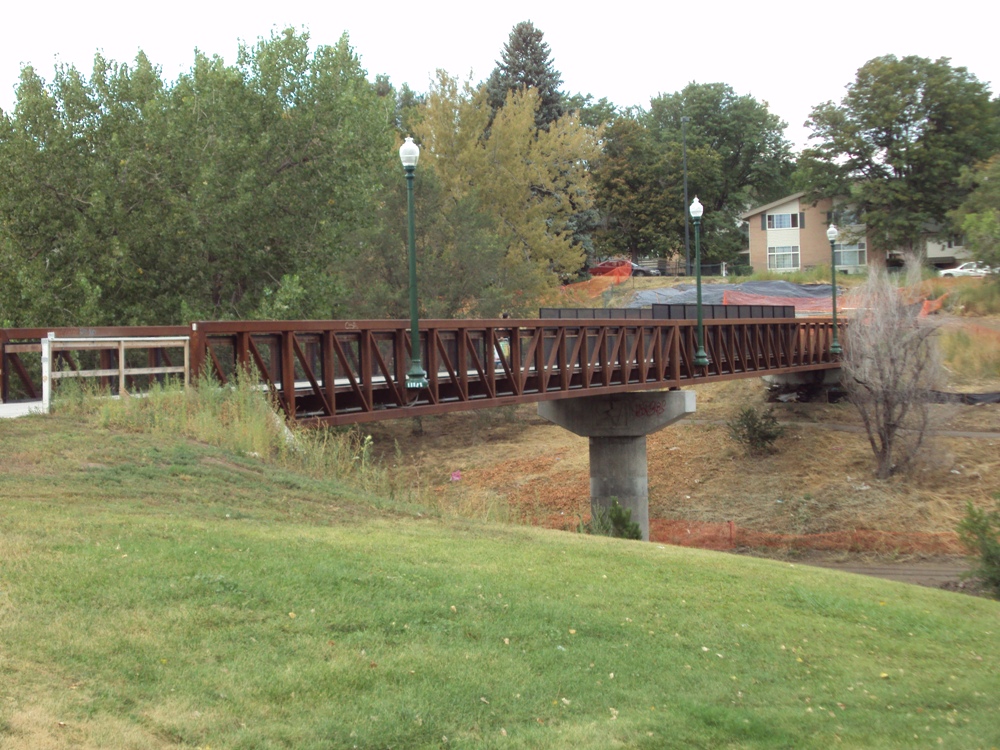 The Knox Station is under construction after a major reconstruction of Knox Court over Lakewood Gulch. The old box culvert (with just one opening) was replaced with a three-box culvert to allow more water to flow unobstructed under the street during major storms. There was a lot of water flow mitigation work to be done in this section of the corridor. The station will not have any parking, but you can see the bus pullouts have been completed already. 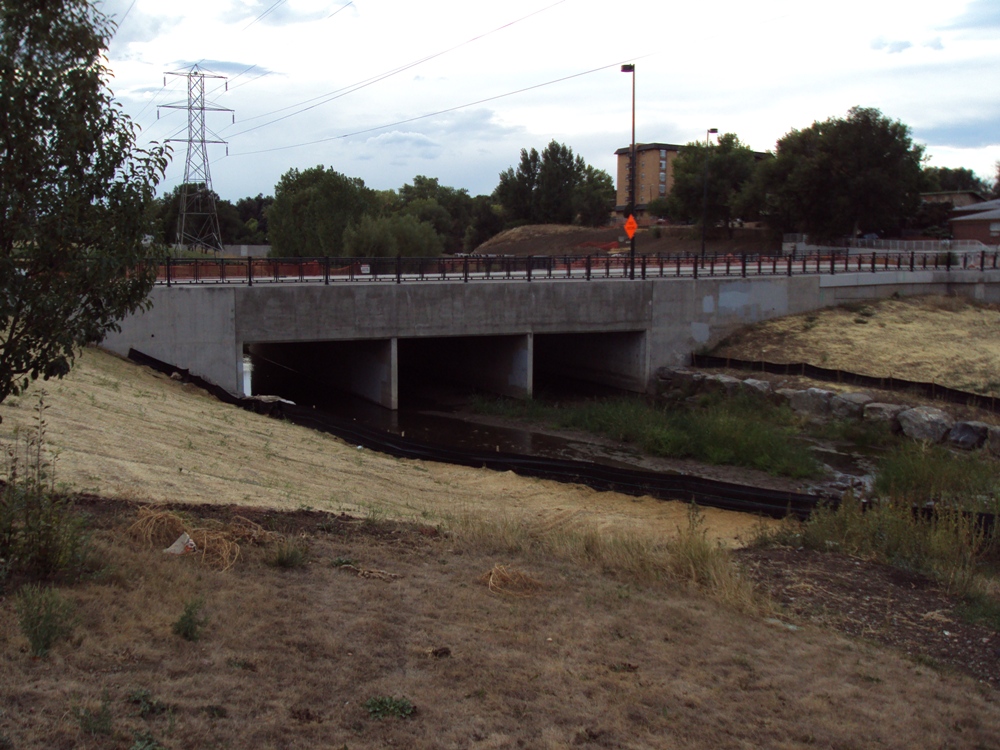 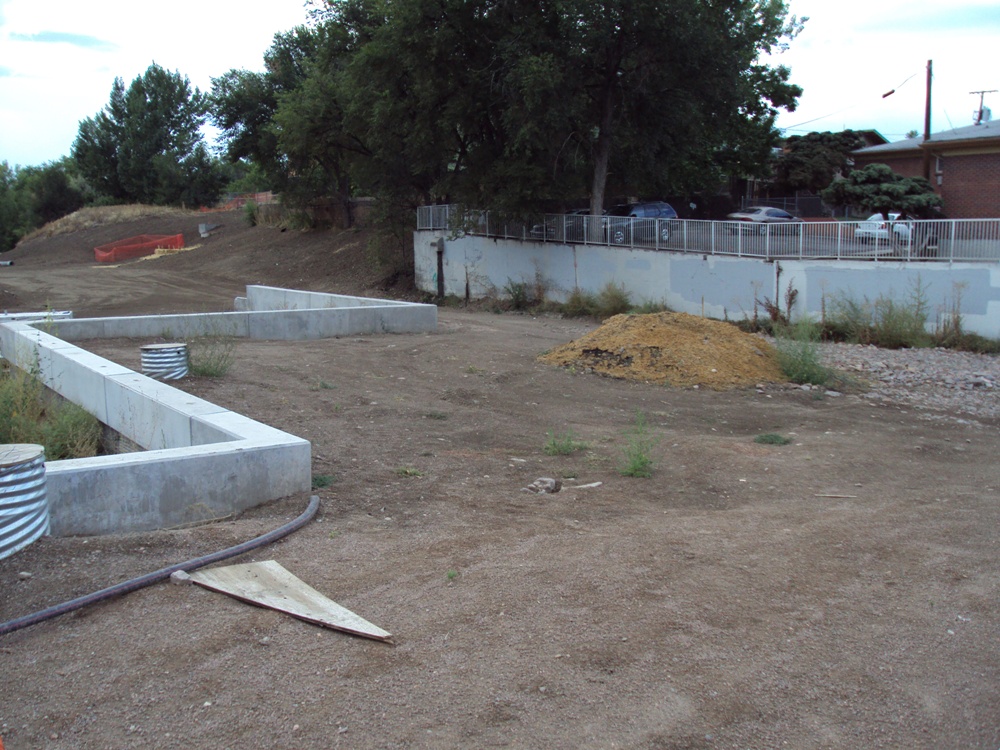 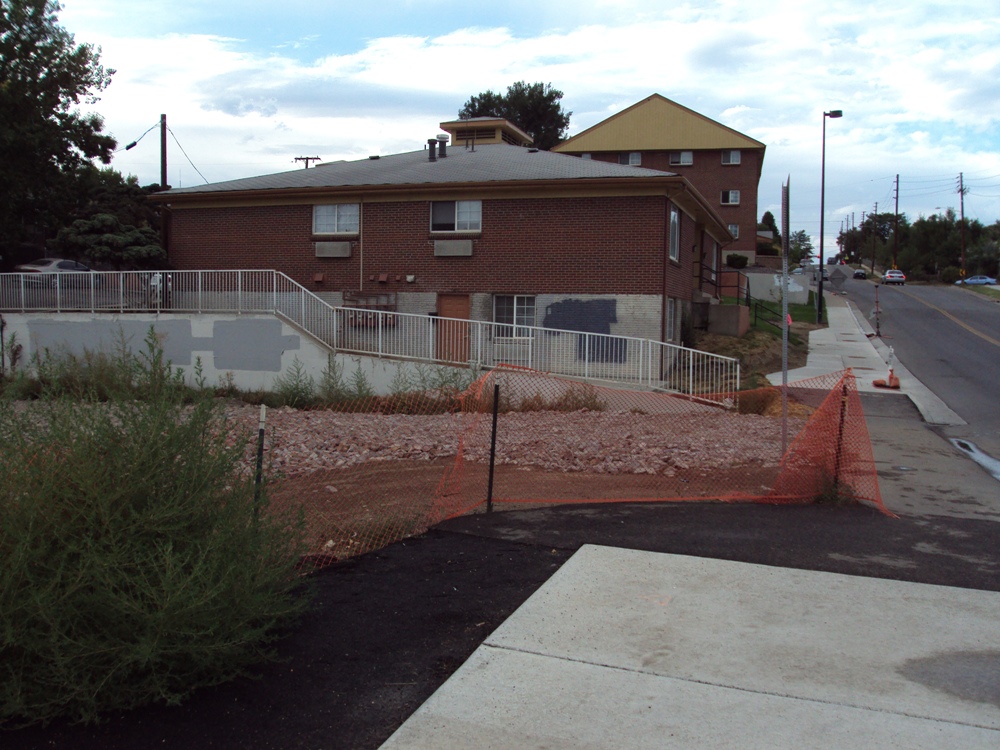 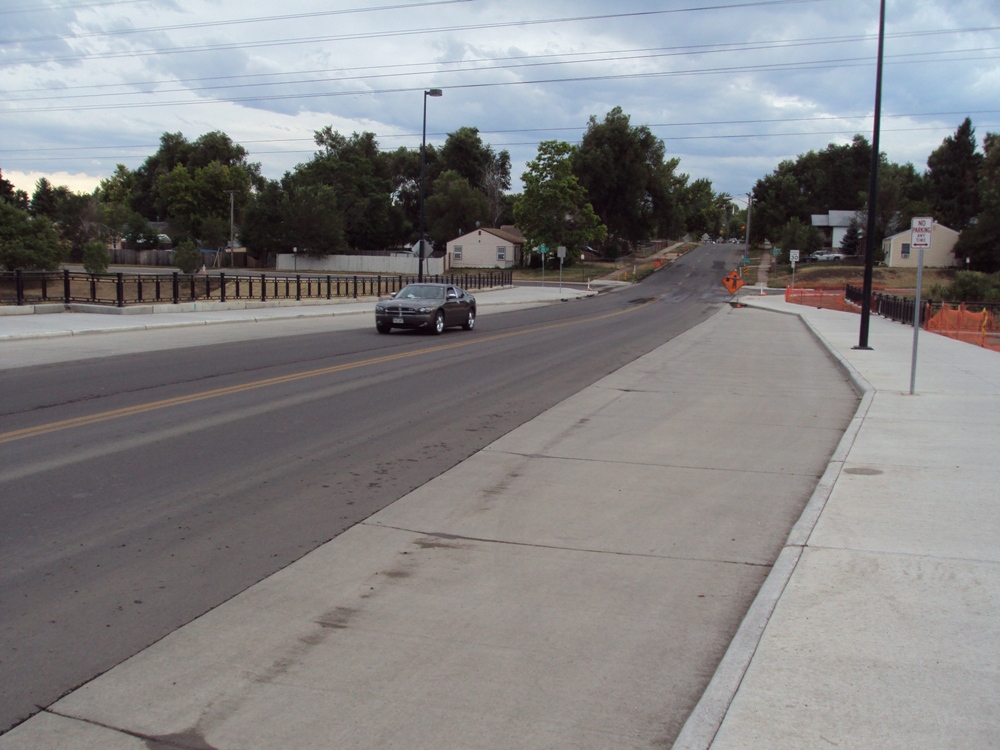 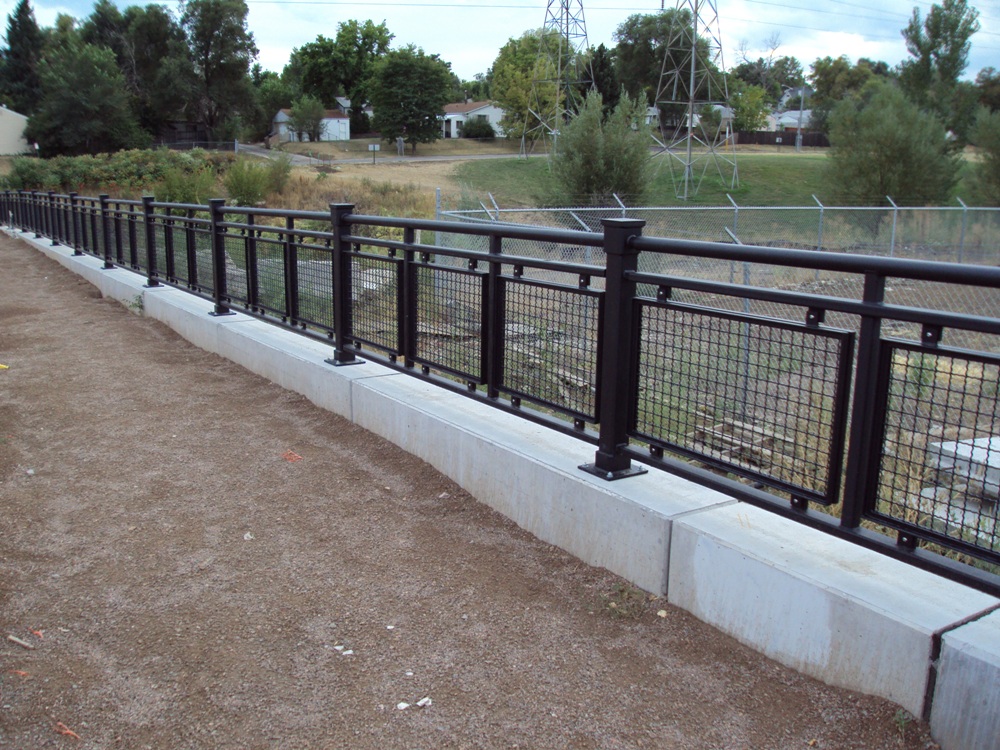 The Perry Station is also under construction – although no bus facility will be in place at this station. Some of the longest retaining wall sections are located near this station, as is the Tennyson Pedestrian Bridge, which you can see in the distance. 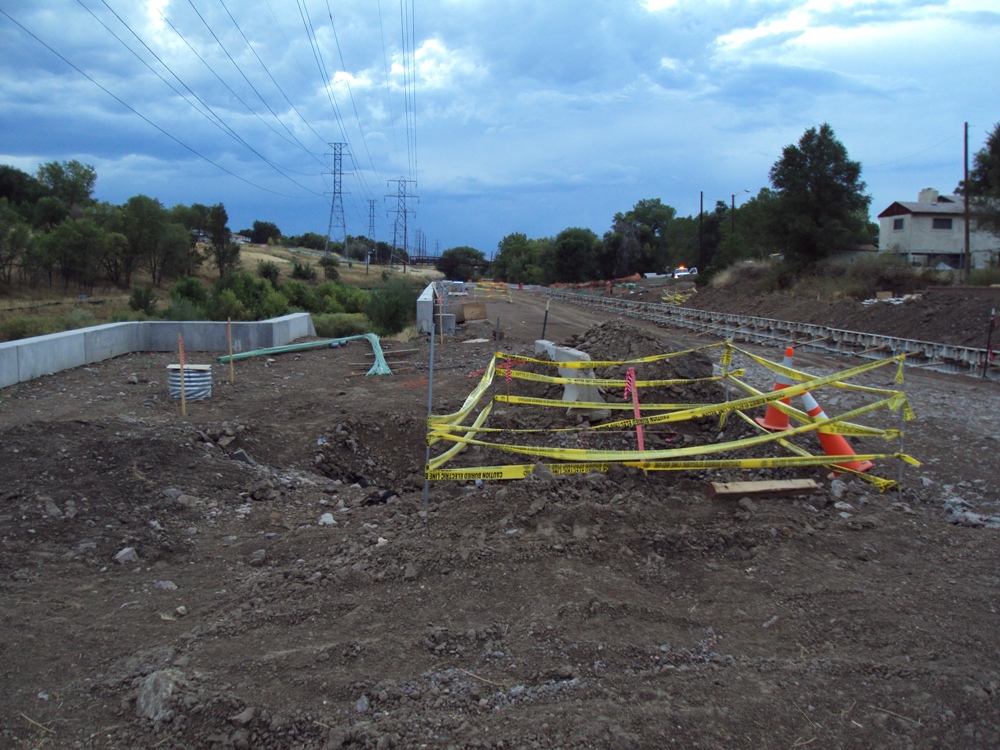 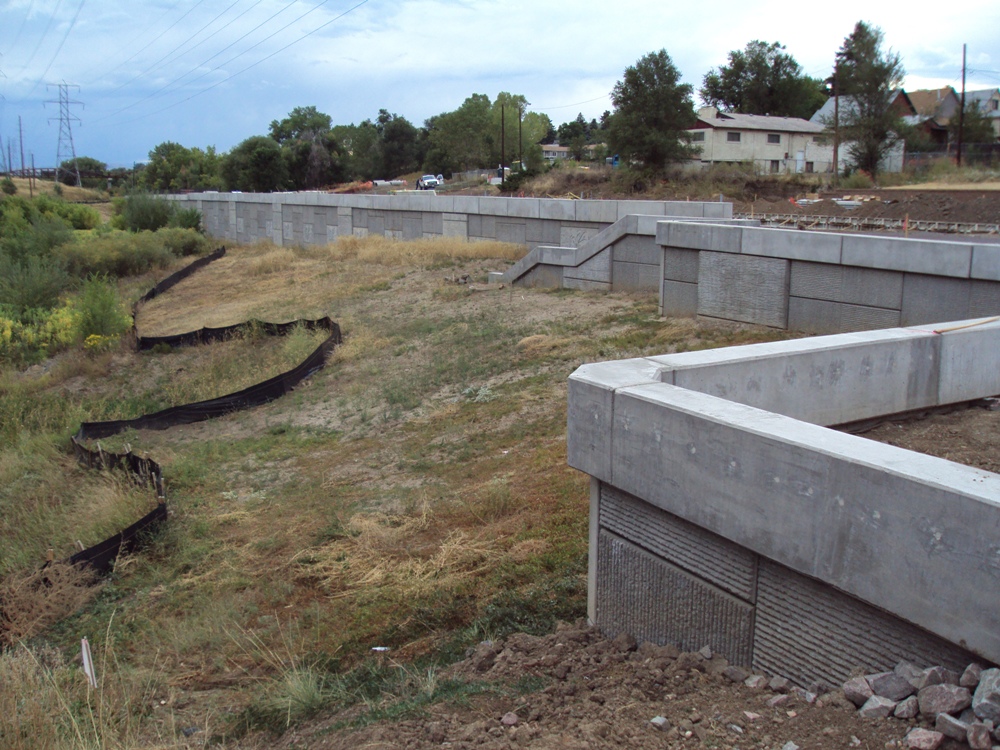 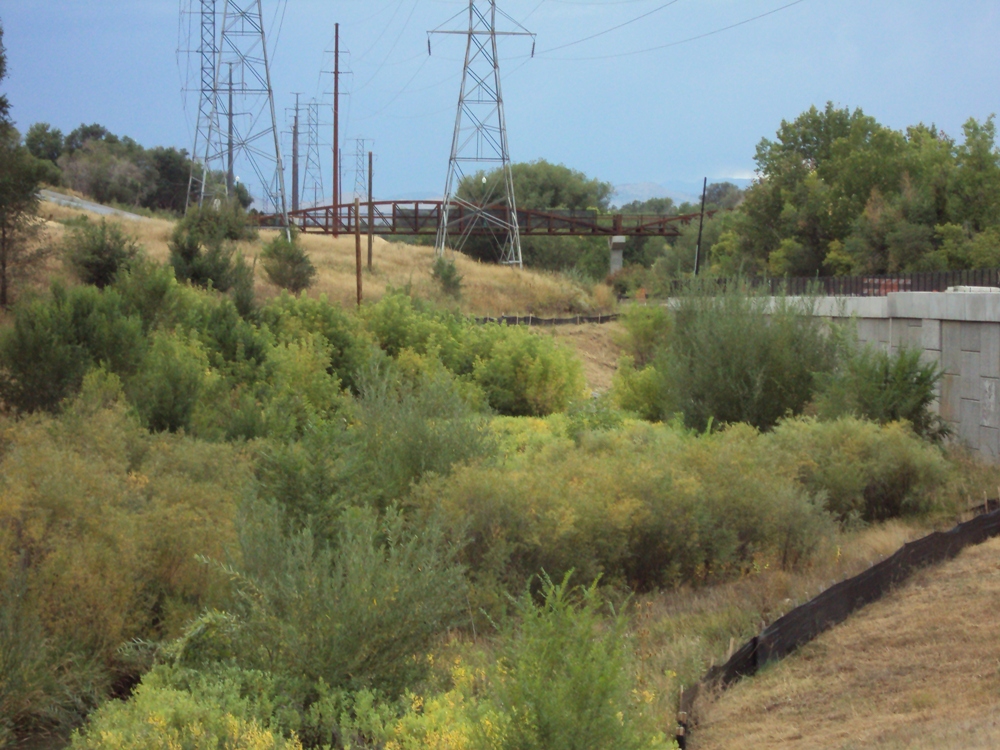 That’s it for the Denver portion of the West Corridor. Next post, we’ll start off at Sheridan (actually the Denver/Lakewood boundary) and head further west. For more information on FasTracks and the West Corridor, check out www.rtd-fastracks.com.