Down by the River

Did you know the South Platte River is getting a makeover in a tucked-away industrial stretch south of Mile High Stadium? It may not be as visible as the big Union Station project just a bit to the north, but the Platte River project, along with a couple of other major infrastructure investments in the vicinity, will transform the way people and water flow through the southwestern corner of the Downtown Denver area.

A total of three infrastructure projects are underway in the area around the Xcel Energy Zuni Plant south of the stadium, so in case you weren’t aware of what’s going on down by the mighty Platte, I’m happy to provide you with this overview. The three projects are: Floodplain and bank improvements to the South Platte and Lakewood Gulch, RTD’s West Corridor Light Rail project, and the reconstruction of the Federal Boulevard bridge over Lakewood Gulch. The projects are being coordinated in a good example of several government and utility entities and private contractors all working together.

South Platte River/Lakewood Gulch: You may have heard the old saying that when Denver was first founded, the settlers described the South Platte River as “an inch deep and a mile wide”. That wasn’t much of an exaggeration. The Platte has been prone to frequent flooding, as several great floods in the city’s history demonstrate. When the Central Platte Valley area west of Downtown was planned for redevelopment in the 1980s, fixing the flooding issues was a necessary component to the area’s redevelopment. The first flood control project was completed in 1995 on the stretch of the Platte between Cherry Creek and I-25. The second project was completed in 2001 between I-25 and Lakewood Gulch, and now the third and final stretch, from Lakewood Gulch to approximately 8th Avenue, is underway. The current project will finally remove most of the areas west of Downtown from the 100-year floodplain, and is being directed by the Urban Drainage & Flood Control District (UDFCD), which was formed in 1969 to oversee waterways and flood control in the Denver Metropolitan area.

The South Platte River/Lakewood Gulch project is widening the Platte River between Lakewood Gulch and 8th Avenue by about 40 feet on average (roughly 20 feet on each side) as well as lowering the river bed by about 5 feet. Doing so greatly increases the river channel’s capacity during heavy rain events, thereby decreasing the potential for flooding. Here’s a photo of this stretch of the Platte (courtesy of the UDFCD):

As part of the river project, the multi-use trail system along the river will be completely rebuilt and expanded, a grade separated trail crossing under 13th Ave will be installed, three drop structures (think: mini-waterfalls) will be built in the river to allow for flatter channel slopes, and the river banks will be restored with native vegetation. Here are some photos I took a few weeks ago of the river-widening/deepening effort: 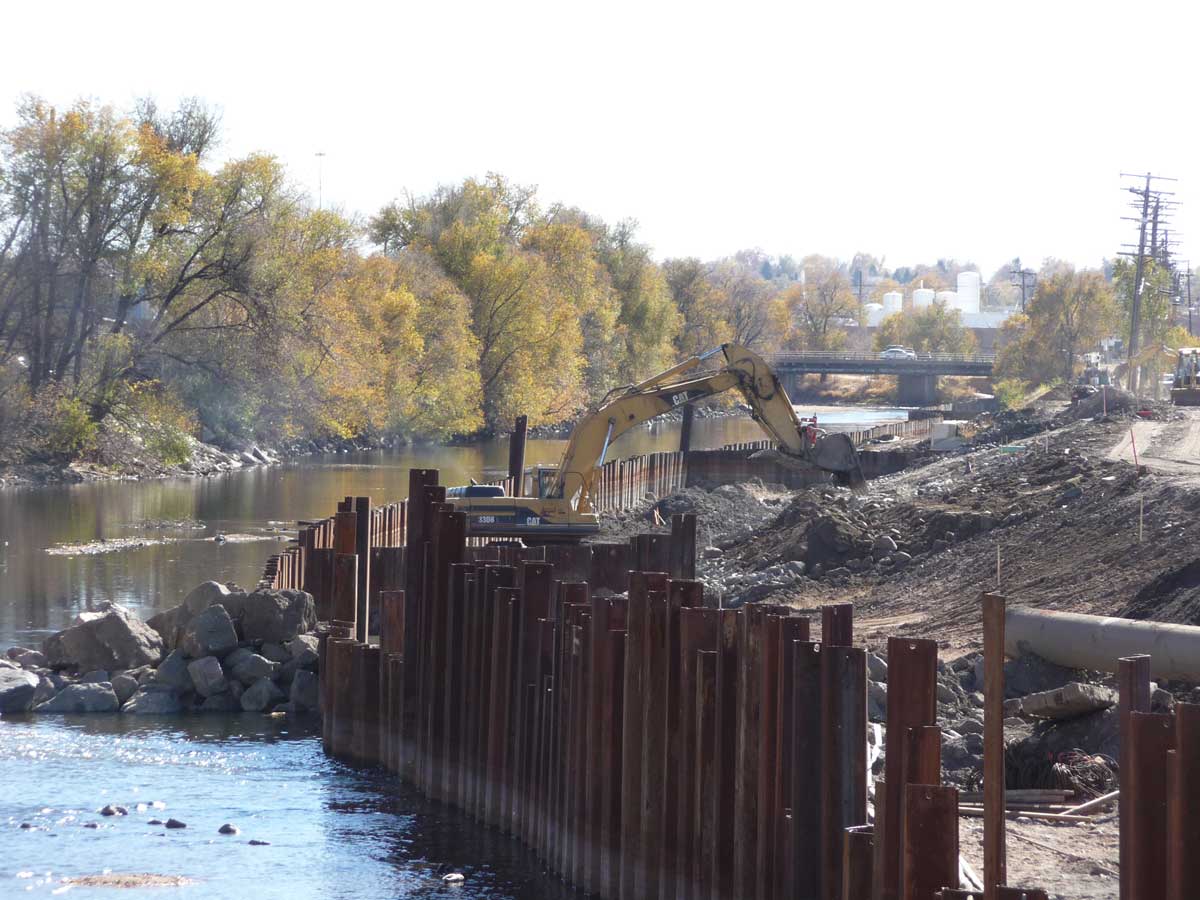 The other part of this project is improvements to Lakewood Gulch. Lakewood Gulch flows east-west roughly along where W. 13th Avenue would be. West of Federal, it’s a wide landscaped corridor maintained by Denver Parks & Recreation as Lakewood Gulch Park and Sanchez Park. East of Federal, it flows along the northern edge of Rude Park up to Decatur Street, where it’s then squeezed into a narrow ditch sandwiched between industrial buildings and parking lots for the final 1,000 feet until it joins the Platte River. Here’s a satellite photo from GoogleEarth and another aerial from the UDFCD: 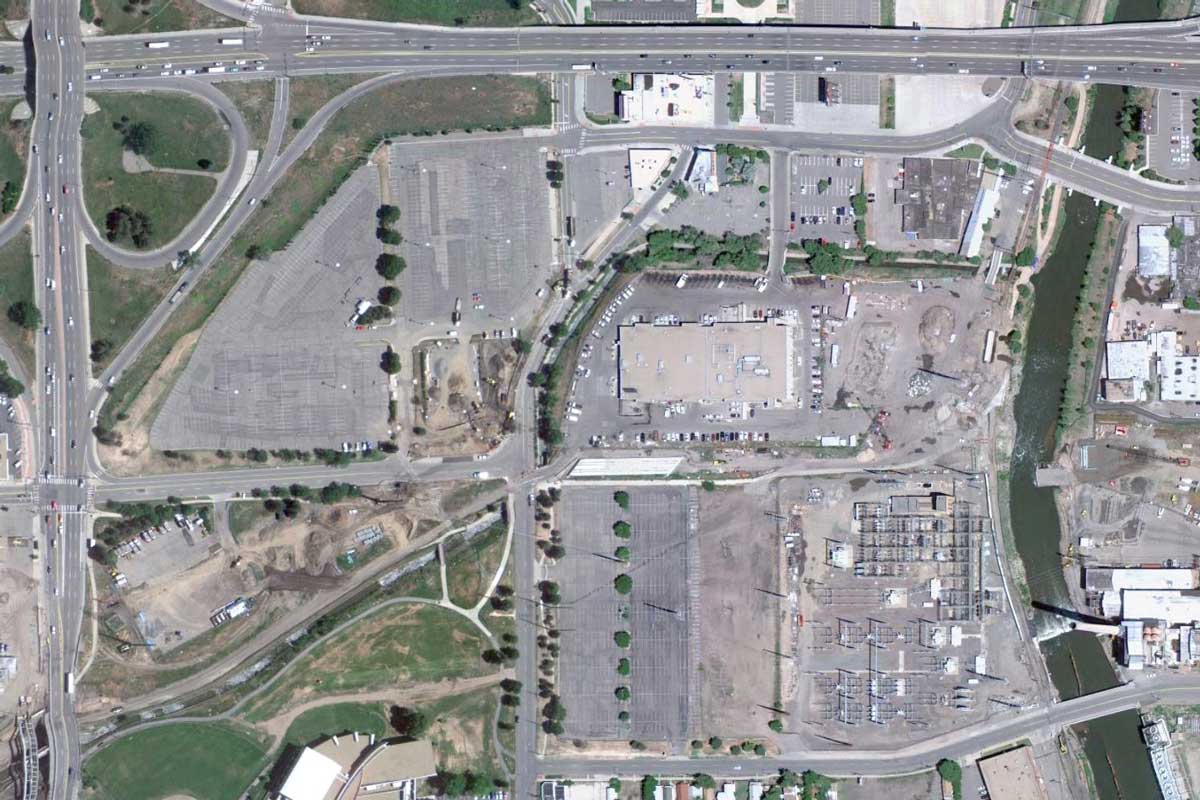 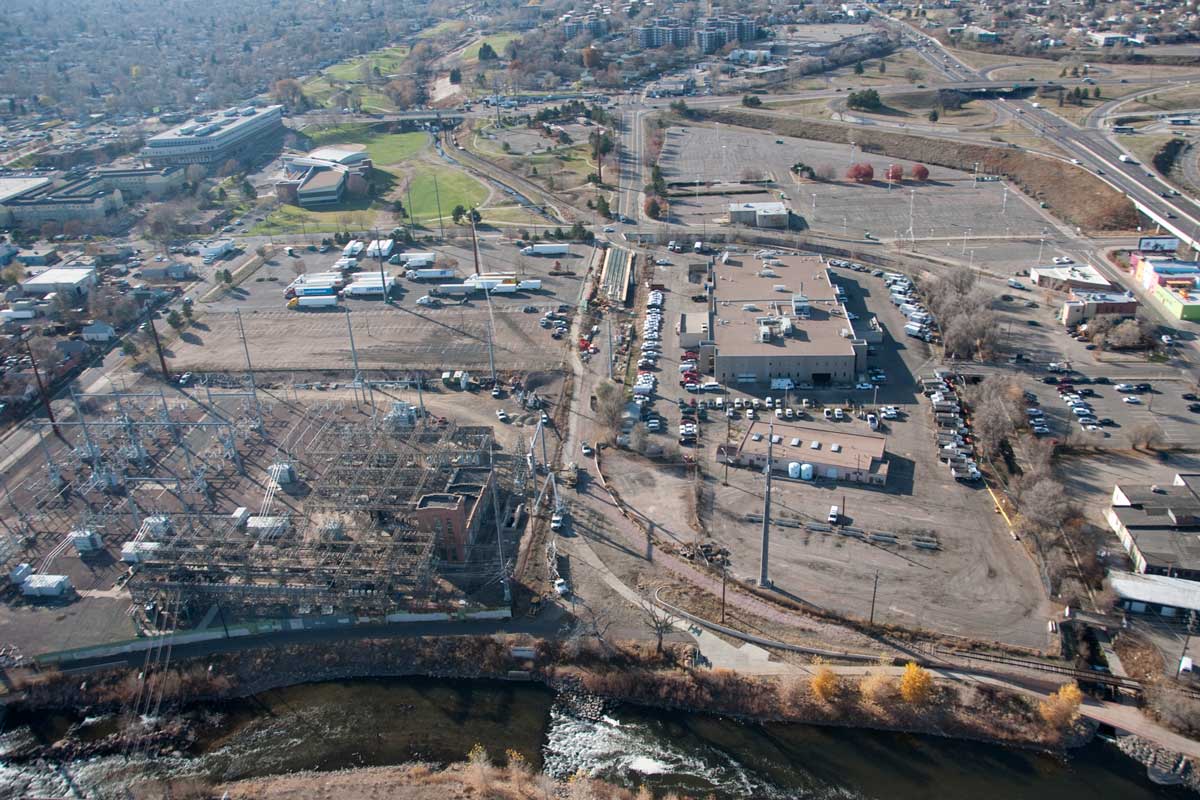 This final stretch of Lakewood Gulch will become a wide landscaped area similar to the Lakewood Gulch Park west of Federal. The large rectangular warehouse building is the City’s Decatur Shops Building. Its functions are being relocated and the building and its parking lots are being demolished. Lakewood Gulch will be realigned and widened through the site, with multi-use trails, a pedestrian bridge, and native vegetation added along the way. Here’s a diagram, courtesy of Matrix Design Group (my employer, who was hired to do the engineering design for the project). Also, a big thank you to my coworker Kyle for his helping me with information and a tour of the project.

RTD West Corridor Light Rail: Running through the middle of the Lakewood Gulch project is RTD’s West Corridor Light Rail line currently under construction. The Federal-Decatur Station will be located on the triangle parcel of land north of Rude Park. The flood control improvements described above will also remove RTD’s light rail line from the floodplain. The transit line will cross at-grade over Decatur Street, span the newly aligned Lakewood Gulch on a new bridge, before crossing over the Platte River. The light rail bridge over Lakewood Gulch is being built first (it’s visible in the GoogleEarth photo above) and then the new gulch will be dug underneath it. Here are two photos I took, the first one looking straight east down the light rail path with the Lakewood Gulch bridge in the foreground and the arched spans of the bridge over the Platte in the background. The second photo shows a side view of the new light rail bridge over the Platte: 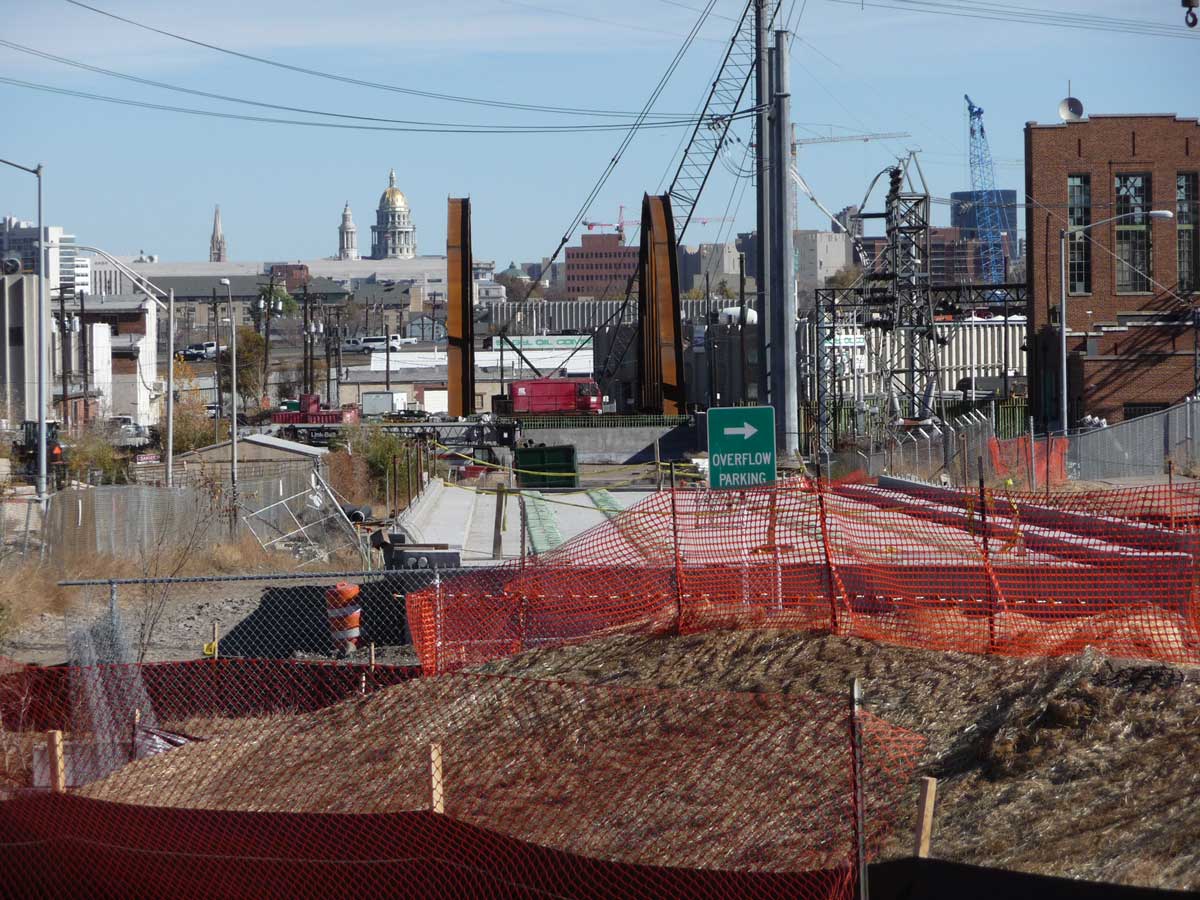 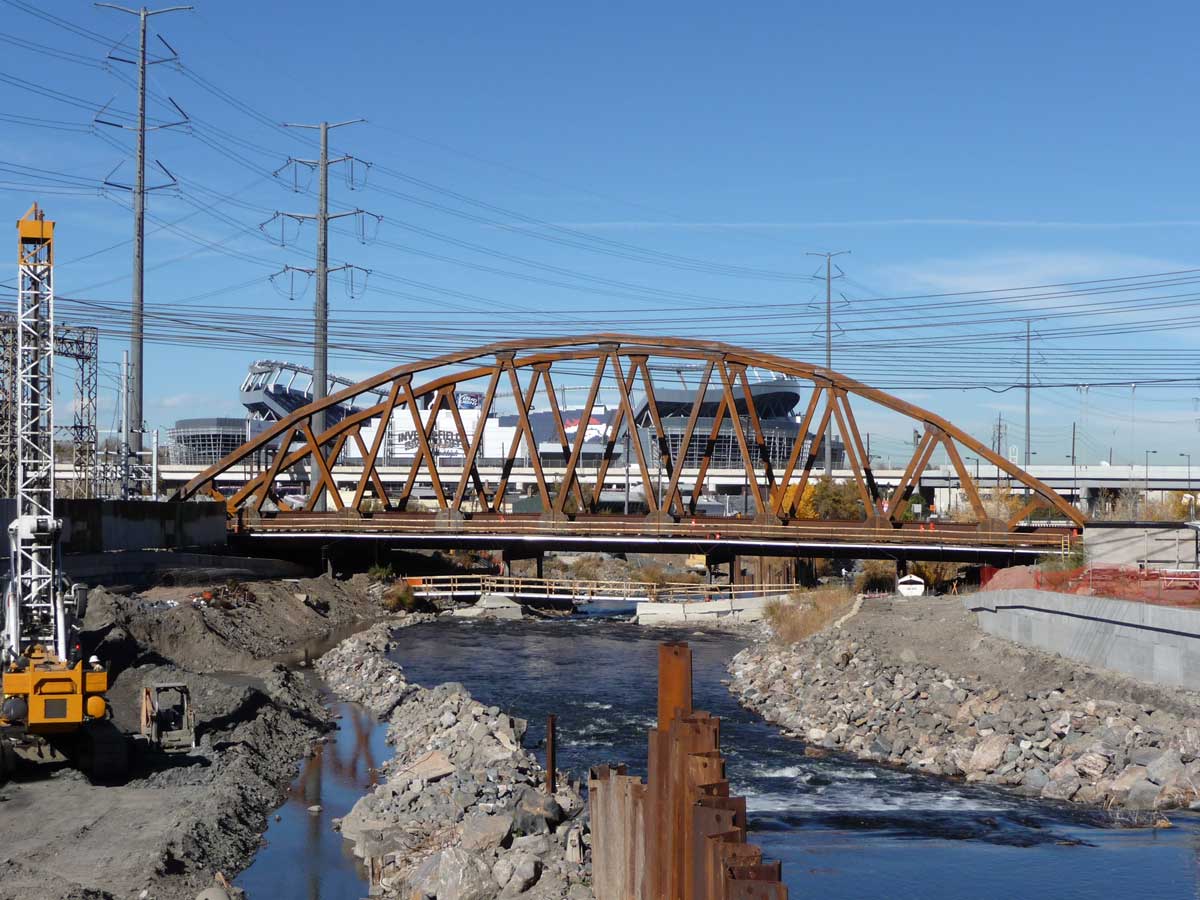 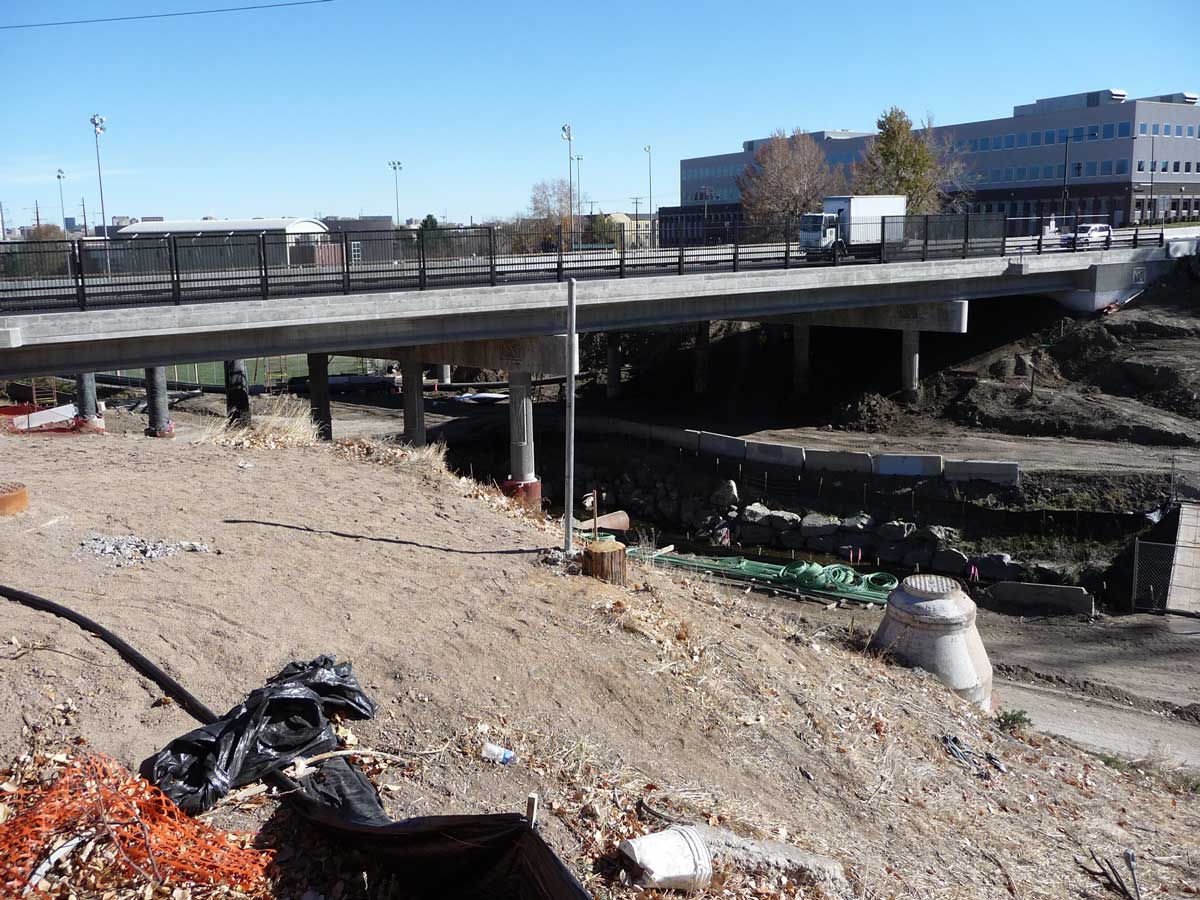 There’s actually a fourth project in this area… just to the north, CDOT is getting started on rebuilding I-25 over the Platte River. If you’ve ever walked from the Invesco Field light rail station to Mile High Stadium, you’ve walked under the I-25 bridge over the Platte. That’s a two-year project that is sure to make a mess of traffic, but it’s one of the poorest-rated bridges in Colorado, so it’s good to see its reconstruction happening.

Lots of great infrastructure projects going on in Denver!