This is the sixth DenverInfill Retrospective, our annual review of central Denver’s urban development highlights. This year it’s a little different than in the past, as 2010 represents the first full year that we’ve had a broader focus: urbanism—i.e. all the stuff that makes for great cities. At the end of 2009, we retired the original DenverInfill website and we transitioned the DenverInfill blog from a Blogger to a WordPress format, added new contributors, and expanded its focus from just infill developments to urbanism in general.

So, from both an infill and urbanism perspective, how was 2010 for urban Denver? To answer that question, I’m reminded of the first few lines from Tale of Two Cities by Charles Dickens:

The Best of Times:

The half-billion dollar Union Station project is chugging along with steady efficiency. The long-term impact and significance of this project cannot be overemphasized. Some cities long for the return of their historic train stations, for they lost them to the wrecking ball decades ago. Some cities retain their historic train stations in a repurposed form, but they long for the return of their station’s original function: a regional transit hub. In Denver, we are fortunate, for we will have both: our historic train station, restored and revitalized, serving as the bustling transit hub for the region. Billions of dollars of private sector investment waits to unfold near the Union Station, while new grand public spaces around the station are being designed to welcome residents and visitors for generations. And for the play-by-play commentary on this four-year project there is really only one source you can count on: Rick, here at the DenverInfill blog. Now up to Update #48 and counting, Rick has been providing regular progress reports that satisfy the construction junkie in all of us. In 2010 we also had a chance to experience the awesome Union Station movie produced by Havey Productions, while Union Station Advocates continued to push for excellence in the project’s urban design and public space components.

The FasTracks program (expertly covered here at DenverInfill by Ryan) also made significant progress during 2010. A $300 million federal government loan for Union Station and a $1 billion-plus federal funding agreement for the Eagle P3 corridors top the list, along with major construction progress on the West Corridor light rail line. Preliminary construction is underway on the East Corridor line to DIA and the grand Calatrava-designed plans for DIA’s South Terminal Redevelopment were also revealed this past year. (By the way, our DIA post shattered the all-time DenverInfill blog record with 85 comments.)

At the other end of Downtown, there are construction cranes a-plenty as three projects, the state’s Ralph Carr Judicial Complex and History Colorado Center developments and the Clyfford Still Museum, add another half-billion dollars of investment to Downtown Denver. Along with the major renovations of the McNichols Building in Civic Center Park for Denver’s hosting the Biennial of the Americas, Better Denver Bond-funded restorations of Civic Center Park’s major historic architectural and landscape elements, and the completion and grand opening of the Denver Justice Center, the Civic Center end of Downtown wasn’t going to let Union Station get away with all the action. 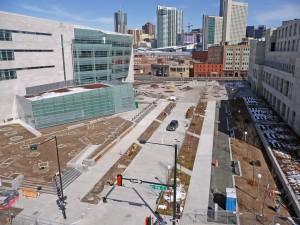 We also saw in 2010 the completion and opening of several major developments, including the Four Seasons Hotel & Residences and 1800 Larimer that redefined the Denver skyline, the 18th Street Pedestrian Bridge and the Railyard Dogs park in the CPV, the new Auraria Science Building, Solera, the Embassy Suites next to the convention center, several new buildings in the Denver Housing Authority’s Park Avenue project, new medical facilities in Uptown, and many smaller projects scattered throughout the Downtown area.

Downtown wasn’t without its groundbreakings in 2010 either. In addition to the Union Station and Civic Center projects mentioned above, getting underway this past year was 1099 Osage, the final phase of Highland Crossing, and the Metro State Student Success Building. There’s also the new DaVita Headquarters next to the Millennium Bridge which got under construction right at the end of 2010 with not really a ground-breaking per se, considering the tower will be built on top of an existing underground parking garage, but more of a crane-raising. There’s also the big 14th Street Reconstruction project, and the Larimer streetscape project, that moved forward in 2010.

New projects announced in 2010 that should break ground in 2011 include 2020 Lawrence, the IMA Financial HQ next to Union Station, 17th Avenue Pavilion, the Denver Crime Lab at 14th Avenue & Cherokee (a Better Denver Bond project), and the Metro State Hospitality Learning Center.

Finally, one of the biggest pro-urbanism policy accomplishments, in not only 2010 but in many years, was the approval of the new form- and context-based Denver Zoning Code. Whether you love it or not, the reality is that the new Denver Zoning Code, passed by City Council in June 2010, fundamentally alters the way we guide land development in Denver. Since the 1950s, Denver has regulated development through a zoning code that was based on an “old urbanism sucks!” and “automobiles rule!” philosophy. Now, our new zoning code is based on a philosophy rooted in a respect for the city’s existing urban forms and patterns while encouraging new development and higher densities near transit and in redeveloping areas. I give major kudos to Denver Community Planning & Development for the huge 5-year effort to redo the zoning code and zoning map for the entire city. While certainly not perfect in every detail, the zoning code overhaul finally aligns our land use and transportation plans with our implementation and regulatory framework. This will serve Denver very well for the next several decades.

Finally, no overview of the best of 2010 would be complete without a mention of Denver B-Cycle. With about 50 stations and more coming next year, Denver B-Cycle, the first major bicycle-sharing program in the country, added a new urban vibe to the city in 2010 and may represent the tipping point in a cultural shift towards alternative transportation. Already more bicycle lanes were added to Downtown Denver’s streets in 2010 than probably in all previous years combined. In 2030, when hundreds of miles of bike lanes and cycle tracks criss-cross the city, we may look back and say “It all began in 2010.”

The Worst of Times:

Well, what can I say that everyone doesn’t already know: the economy tanked, the boom is over, and we’re in a period of “transition” (that’s a nice way of saying there’s not going to be a lot of private-sector real estate development in the next few years). But from a city-building perspective, things could be worse. Private sector development is only one aspect of city-building. It is during these low points in the real estate cycle that we plan for the future, make public infrastructure investments, improve our development policies, and generally get ready for the next boom. That is exactly what we are doing in Denver.

Despite the gloomy economy, it is easy to remain bullish on Denver. Almost all cultural and demographic trends point to a bright future for our country’s urban centers, and particularly for a place like Denver which already has a strong physical and economic foundation and an optimistic and progressive citizenry that believes in investing in its city. It may be many years before the pace of infill development approaches that of this past decade, but our journey towards excellence in urbanism for the Mile High City continues in 2011.