Just a block away from History Colorado Center is the State of Colorado’s new judicial complex, officially known as the Ralph L. Carr Colorado Judicial Center. Ryan just posted Part 1 of this “Inside the Infill” feature, so here’s a second dose of infill goodness for you to enjoy. Rumor has it there may be a Part 3!

The Ralph Carr Judicial Center is already making an impact on the Civic Center skyline, and I like it. The architecture is classic Neoclassical, with marble columns and all. The state courts wanted a building that communicated a stately, civic presence on par with (and visually oriented towards) the State Capitol, and they are getting it. But despite the Ralph Carr’s architectural gravitas, I find its contemporary touches and generous fenestration (for this style) welcome features that give the building an inspiring, approachable quality. And it’s not even finished yet. Kudos to Denver’s Fentress Architects for designing a building that is clearly worthy to take its place at Denver’s hallowed ground, Civic Center. Our thanks to Trammell Crow and Mortenson Construction for the tour.

I like the exterior materials too. A light gray granite wraps the 4-story courthouse wing as well as the lower levels of the 12-story office tower, and pre-cast panels complete the upper floors of the tower. They work well together to give the complex a unified visual appearance, while exposing pedestrians to the high-quality material like granite we expect in important government buildings. Here’s a view (an inner courtyard along Broadway) of the vertical transition from granite to pre-cast panels. The darker-gray window glazing complements both materials. This wasn’t intentional, but I now notice the nice reflection in the window of perhaps Denver’s best light gray granite-clad modern building, Republic Plaza: 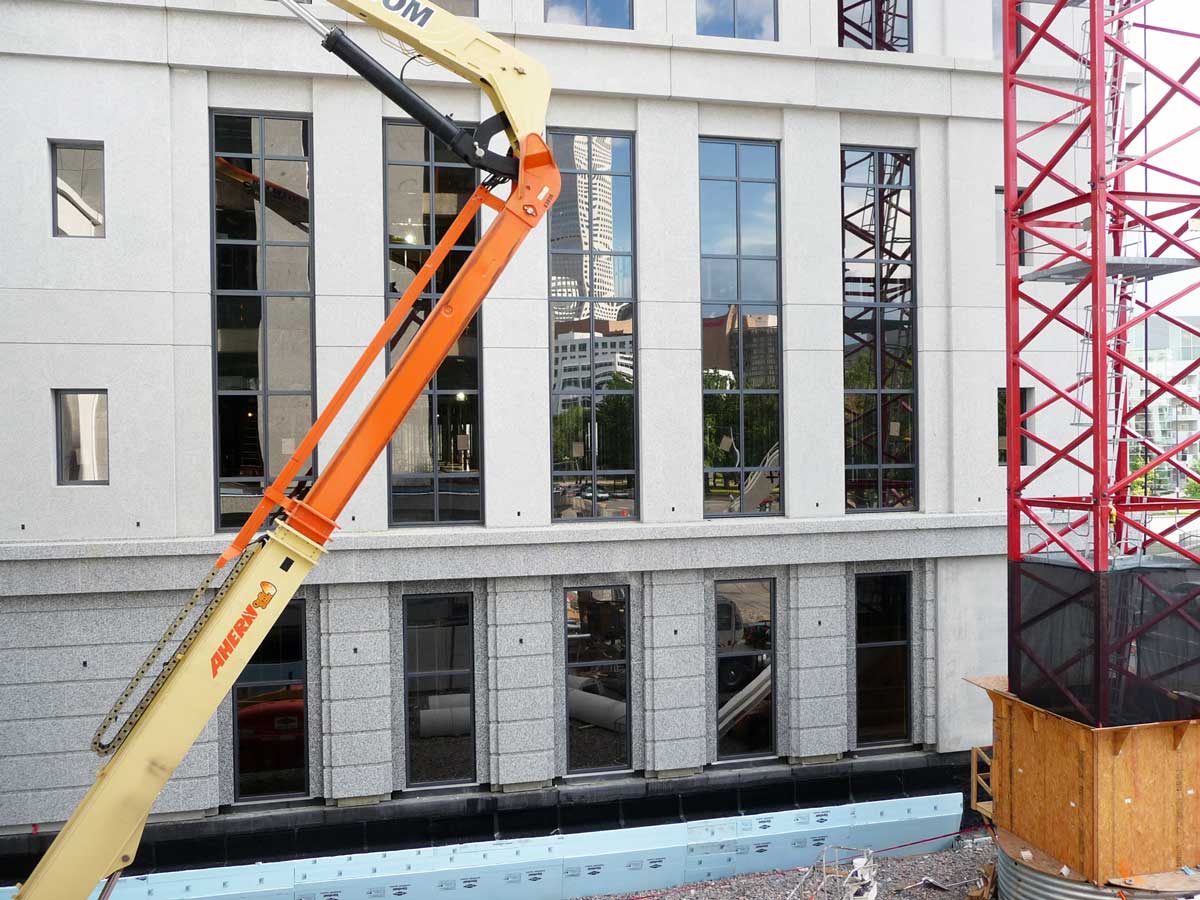 The office tower incorporates into both its north and south facades the columnar form, with vertical glass “columns” in between adding a modern gesture. 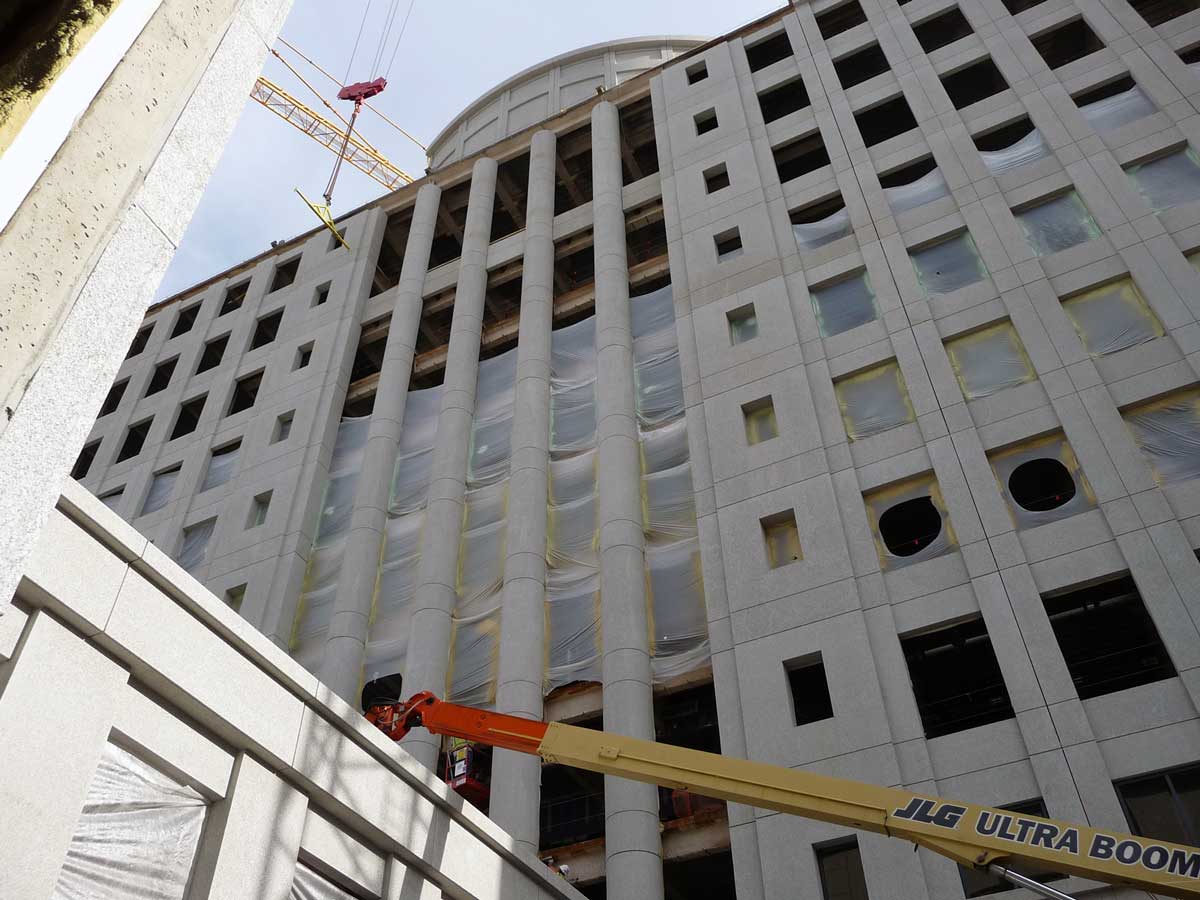 Before we we went up to the project’s upper floors, we saw a quick preview of Mortenson’s digital planroom technology. More on that in a future post. Then we took a ride in the construction elevator “cage” that climbs up the outside of the building: 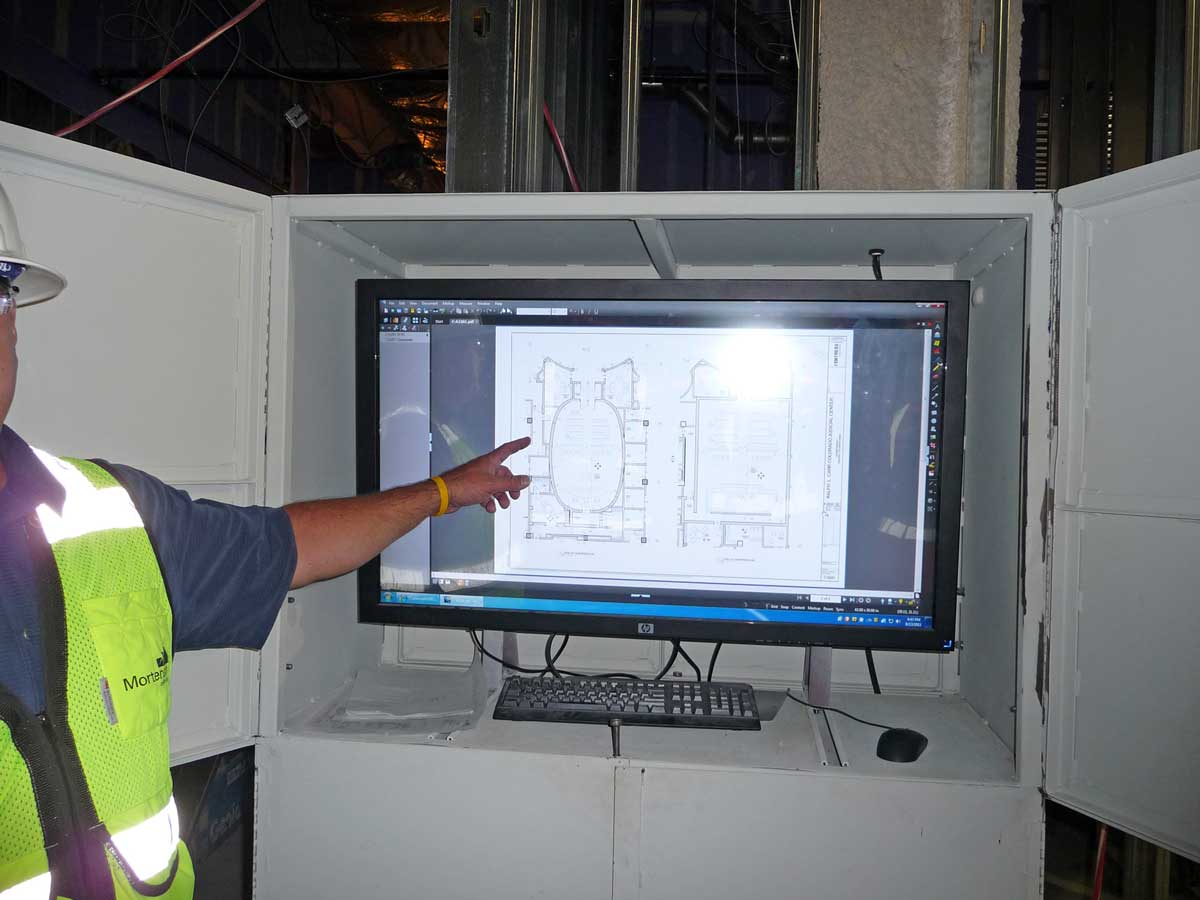 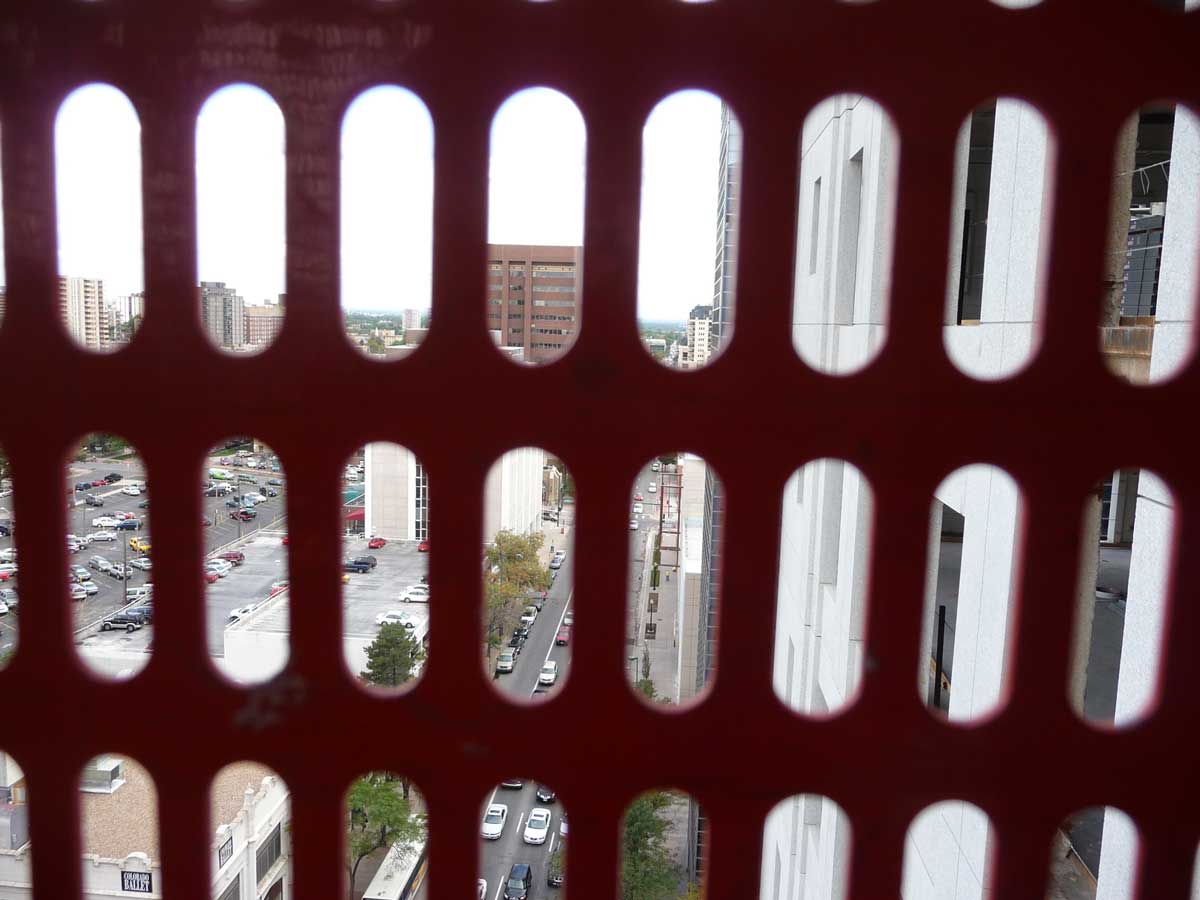 From the 12th floor, here’s a nice view of the two courthouse domes: the smaller one in the foreground will be centered above the Colorado Supreme Court courtroom, and the larger one will cover the grand atrium. On the right, a stack of windows are being lifted up by a crane while traffic below on Broadway goes about its business: 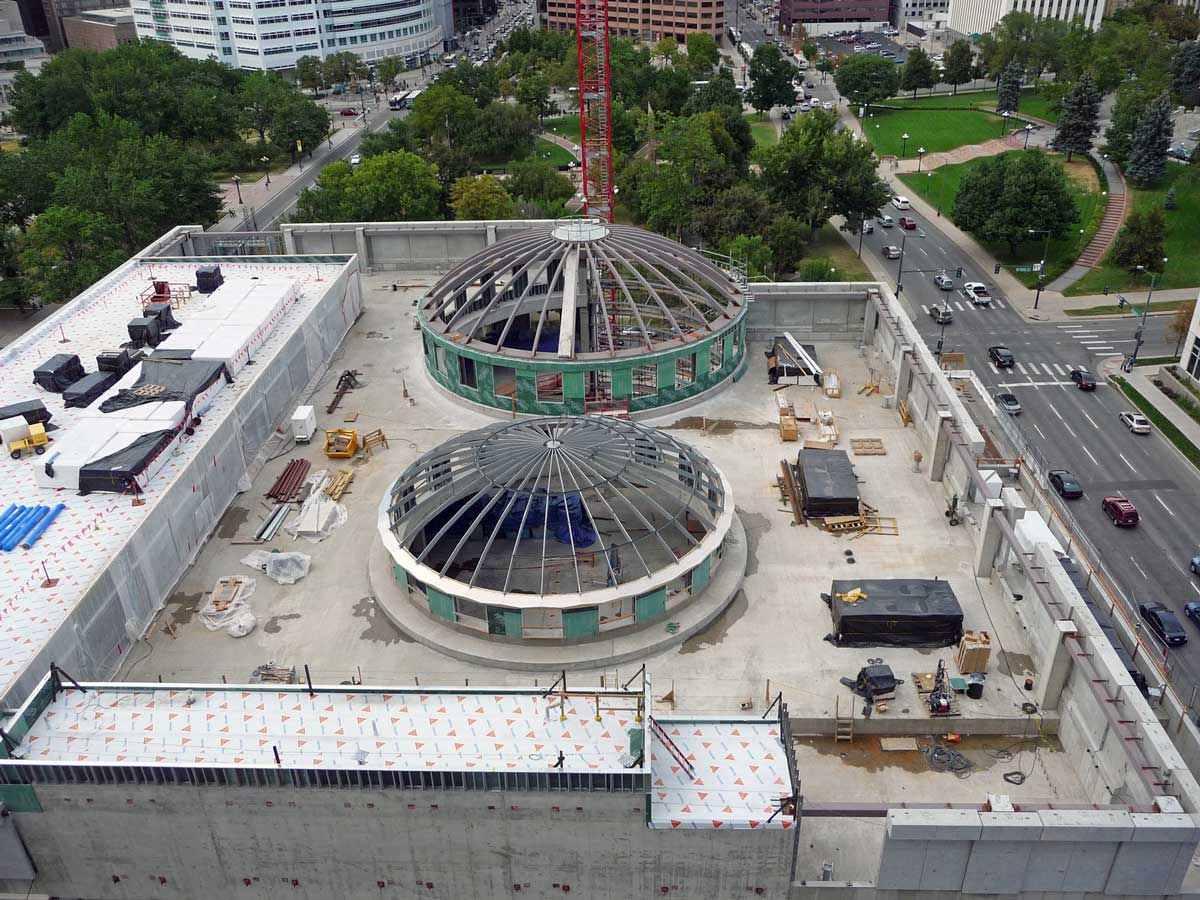 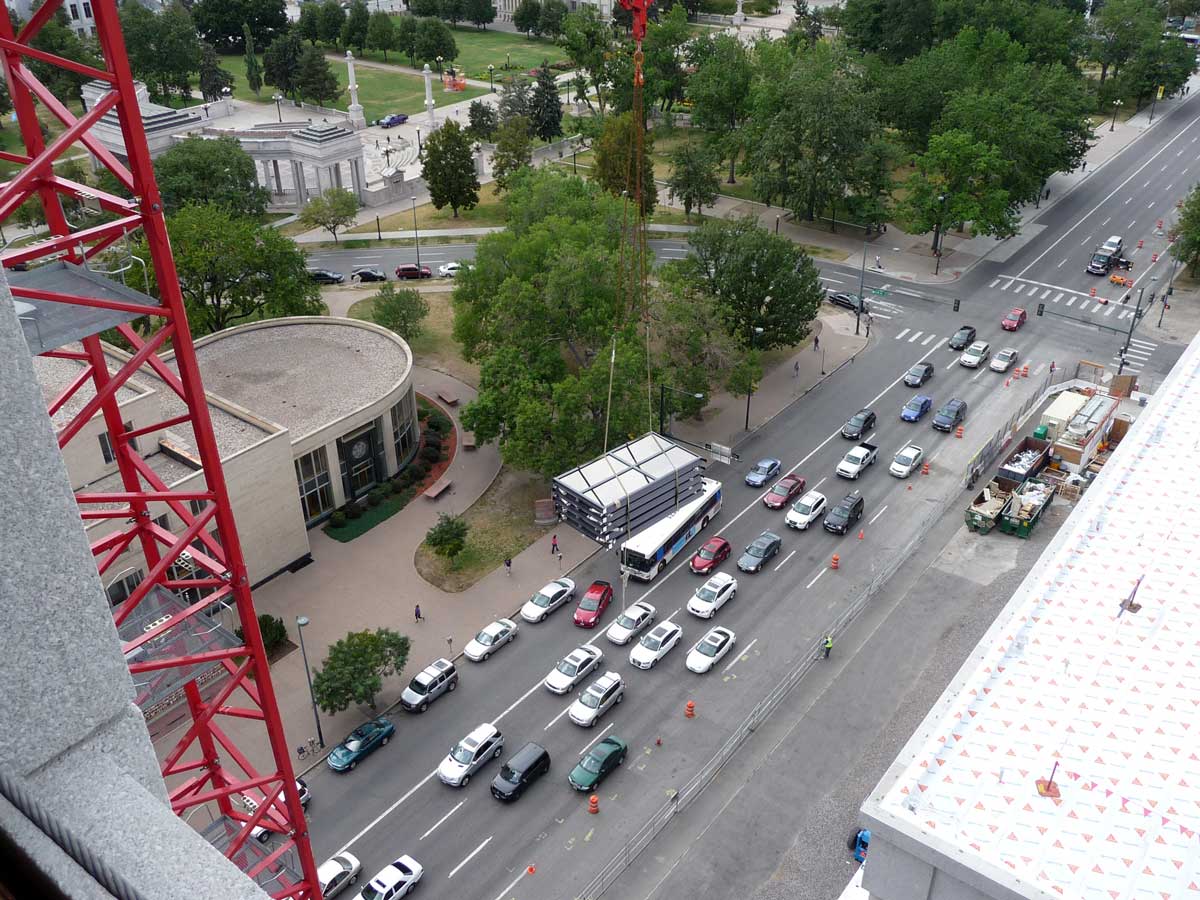 From the Supreme Court’s fourth-floor atrium entrance, here’s the symbolic view looking back at the statehouse. Once all the scaffolding and temporary window supports are removed, this will appear as one big window offering one fantastic view of our state’s beautiful gold-domed Capitol.

Finally, while we now have real-life views of this project to observe, I recently ran across some additional renderings of the project I hadn’t seen before. They can be viewed here.

PS. If you don’t know who Ralph Carr is and why he is worthy of having a justice center named after him, please go here.