Work on the project has concentrated on one relatively small space for the past several weeks. Gone for now are the days of having activity scattered throughout the project area: light rail tracks, new stations, new streets, new sidewalks, etc. All of those have been completed. Now the work is confined to excavating the second portion of the bus terminal and building infrastructure inside the first portion. Below is a photo from earlier this week that I took through a window inside Union Station. 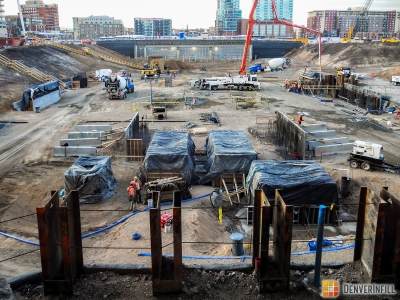 It appears that the excavation work is nearly completed. Foundations are being built for the second set of elevators, stairs, escalators, and for the train tracks that will lay on the roof of the bus station. In the center of the background of the photo just below and slightly to the left of Glass House, notice the large sheet of vertical plastic with bright lights behind. You are looking at the lights inside of the first portion of the bus terminal. The vertical steel beams in the foreground support the shoring wall that is immediately behind Union Station.

It’s difficult to get a perspective from the photo. I’ll try to help. The scale of the hole is similar the first section: the same depth (about 28 feet), the same width, but a little shorter. I’m guessing that the first section is about 75% of the total length of the bus terminal.