I’ve been trying to focus on one section of the Union Station development with each update, but Kiewit has been working so fast I can barely keep up! So, for this update, we’re going to hit two areas: the bus box and the 17th Street Gardens.

First, we now have one continuous floor for the regional bus facility! Crews recently made the final concrete pours and connected the floor of the Union Station half of the bus box to that of the light rail half. All together, that’s one continuous 4-foot-thick slab of concrete approximately 940 feet long and 140 feet wide! This picture was taken through a window in Union Station a couple of weeks ago. You can see the crew and the concrete pumper hose in the upper left of the photo pouring a segment of the final section.

Second, check out the new structures that have popped up along the 17th Street Gardens. The two structures sit to the left of the skylights (when facing Union Station from the light rail station) and will house the emergency egress stairs and the fire command controls. 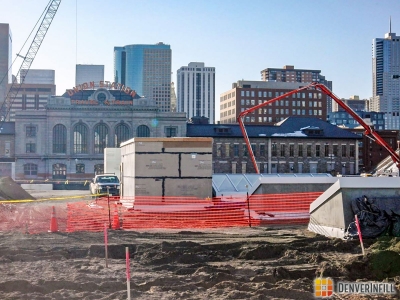