Sorry for the long delay in updating the Union Station project… I’ve been out of the country for several weeks and didn’t have time to take some new pictures for a little while after I returned.

Let’s start by checking out the progress of the pavers near the light rail station and Chestnut Pavilion. At the time this picture was taken, the crew had laid down almost all the preliminary pavers between the station, Chestnut Street, and the 16th Street Mall Ride access road. I say preliminary because cause after the general pattern of varying colors is laid down, the crew goes back and makes the necessary cuts where two or three colors meet to make the curved patterns you see below. 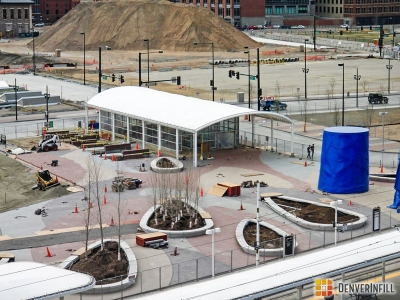 Also, check out the trees that have been added to the large tear drop planters! I counted three large trees in the planter closest to the 18th Street Pedestrian Bridge, and about 15 smaller ones in the planter directly next to it. While the trees were bare when the picture was taken, they have already started to green up a bit since they were planted. 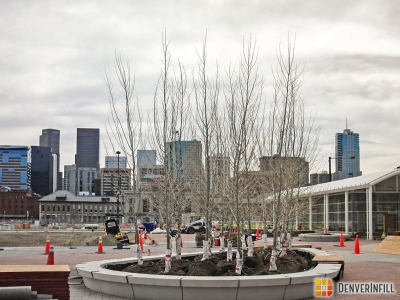 Staying on the same side of the project, work continues on the remaining half of the bus box directly behind Union Station. In our last post, I mentioned that the floor of the bus box was completed–connecting the bases of both halves of the box. Currently, crews are pouring the side walls of the box, with what appears to be about 30% of the work complete at the time of this posting. I wasn’t able to get a good picture of the walls this time around, but will try to get a good shot in the next couple of days.

The other major areas of progress to report are the public works related projects taking place next to and in front of the station.  After installing new pipes and wires, crews have started to rebuild the lane of 16th Street between Wynkoop and Wewatta. Once that section of 16th Street is completed, crews will begin to work on the other side of the street–eventually widening 16th Street in that block to match the width of the street between Wewatta and the Millennium Bridge. 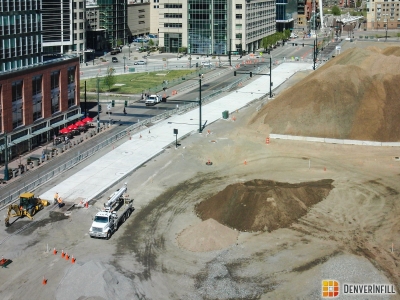 Unfortunately, I was not able to get a good picture of the work being completed on 18th Street. The street, which formerly ended at Wynkoop, is being extended into what was part of the parking lot next to the Ice House lofts. This will allow for car access to the upcoming IMA Financial building that will flank the Station, as well as bus access to the underground bus terminal.

Finally, crews have started to excavate a large section of land in front of the Station entrance. This will eventually house a water overflow tank that will collect water from around the station during a heavy rainstorm–reducing the chance of any sewage overflow issues. 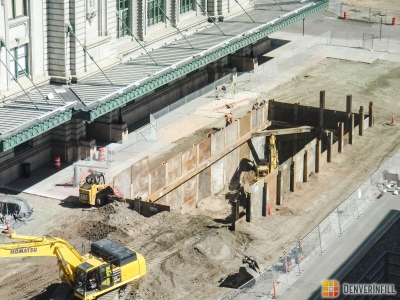