As residents and visitors to the Mile High City may have noticed, there’s significant multifamily residential construction underway in the Downtown Denver area. Back in April, I observed that Denver was on the cusp of another Downtown housing boom and, indeed, there is no longer any doubt that Denver is experiencing a major multifamily housing expansion in its urban core. 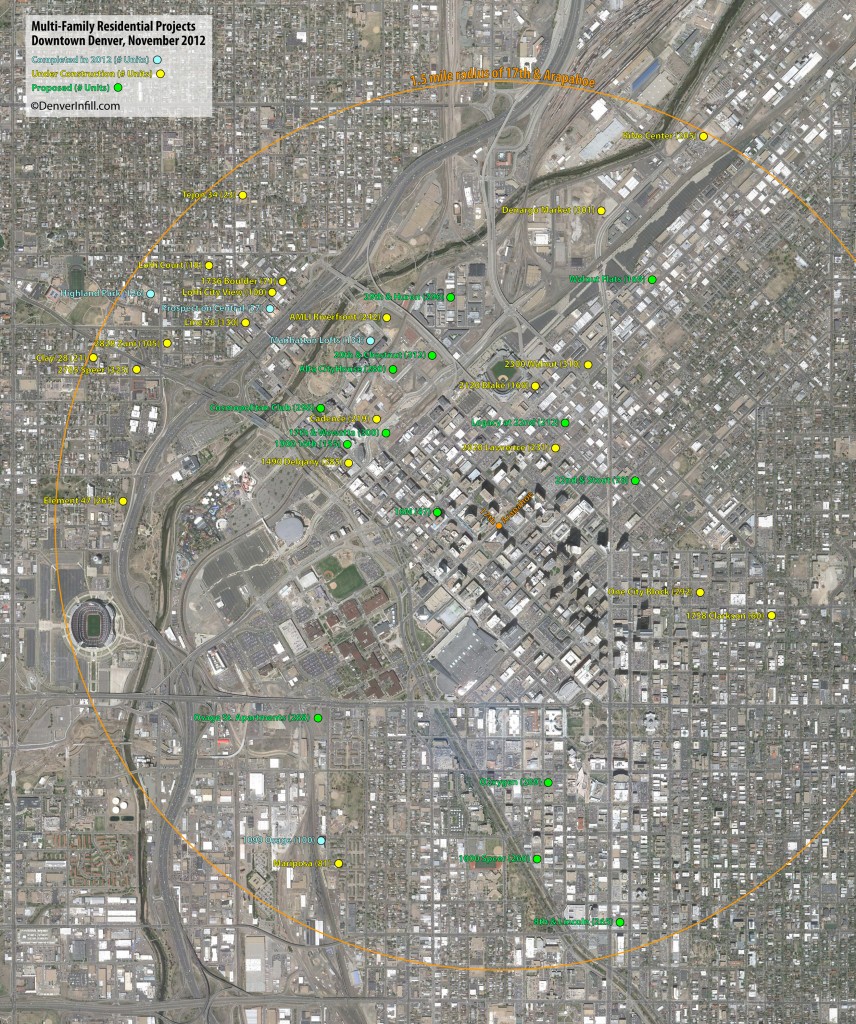 Please note that there are a handful of projects on this map that I haven’t yet gotten around to covering on this blog (stay tuned… working on it!); a few projects that you may have heard rumors about but are not on the map because I consider them at the moment to be too uncertain/speculative; a few projects not on the map due to the small number of units; and perhaps a few projects not on the map that I just simply missed. Nevertheless, this gives you a pretty good idea of what’s going on in the Downtown Denver area. Also, please remember that this map covers only multifamily residential projects, so office and hotel developments are not included. Anyway, let’s break this down by project status: 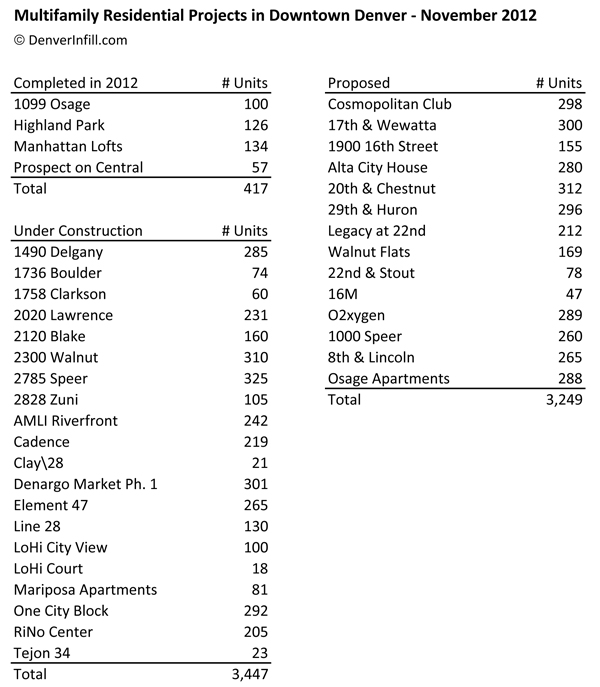 Next, there are the 3,200-plus residential units currently proposed for the Downtown Denver area. Of those, I believe about half them will begin construction within the next six months. If so, that means Denver will add approximately 5,000 residential units to its Downtown area from mid-2012 to mid-2014, or roughly half its total from the entire 2000s decade.

Is that too many residential units in too short of a time period for Downtown Denver?

The Denver metro apartment vacancy rate is currently at a 12-year low. Virtually no new multifamily residential units were added to the market during the economic downturn. Denver led the nation during the recession as the most popular relocation destination for young adults. And, there’s substantial evidence of a growing trend—a cultural shift, actually—for people wanting to live and work in urban areas. So, to answer the question I posed above: Is that too many residential units in too short of a time period? No, I do not think we are currently over-building multifamily residential in Downtown Denver. However, if developers were to continue to propose new for-rent multifamily residential projects in 2013 at the same rate we’ve seen them propose new projects during 2012 then, yes, I believe it would behoove Denver to slow things down a bit, absent some other market factor (i.e. a major spike in job growth) that would justify continuing apartment development at such a vigorous rate.

Fortunately, we’re already seeing a reduction in the frequency of new project announcements. Most of the developments listed under the “Proposed” section in the table above have been around since earlier this year, and not many new projects have been announced within the past month or two. This is a good thing, and hopefully a sign that developers are sensing that we’re at a “wait-and-see” moment in the market.

Regardless of what the market may be like during the rest of the 2010s decade, the current investments taking place in Downtown Denver as a major, mainstream residential market is profound, and is likely to propel Downtown Denver over the tipping-point of becoming America’s next “don’t-need-a-car, live-work-play-shop” market in its own right.