It’s time to conclude our coverage of the development of the new Ralph L. Carr Colorado Judicial Center with this special Inside the Infill post.

The roots of this project go back to the early 2000s. This post from 2007 references a 2005 newspaper article about building a replacement for the undersized and out-of-date Colorado State Judicial Building. This post from early 2010 gives us a first glimpse of the project’s design, and that the new home to the state’s highest courts would be named after Colorado’s heroic governor during WWII, Ralph Carr, who fiercely opposed the internment of Japanese-Americans. Over the past six years, we’ve featured over 20 posts about this project, including the demolition and implosion of the former judicial building that once stood on the site. State court employees have now moved in, and the building opens for business to the public tomorrow. A formal ribbon-cutting ceremony will be held in January, and an official dedication of the building in May.

Let’s wrap things up with some photos of the completed interior. Ryan and I each had a chance last week to tour the new judicial center, so the photos below represent contributions from both of us. There are three courtrooms in the complex: two for the Colorado Court of Appeals (first and third levels) and one for the Colorado Supreme Court (fourth level). Here’s a shot (left) of the entrance to the larger Court of Appeals courtroom on the first floor featuring white marble (from Marble, Colorado), and a photo (right) of the inside of the smaller Court of Appeals courtroom on the third floor, which feels more intimate with lots of rich wood accents: 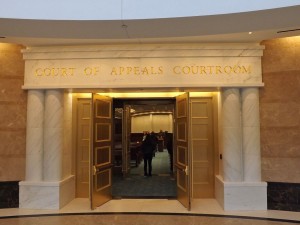 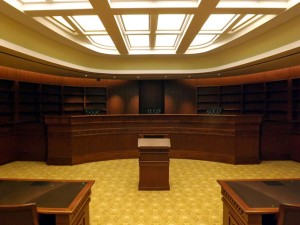 The Supreme Court courtroom on the fourth level of the courthouse portion of the project is stunning. Here are two images. On the left is the bench where the seven justices will sit. On the right, is the glass-domed ceiling that floods the courtroom with natural light: 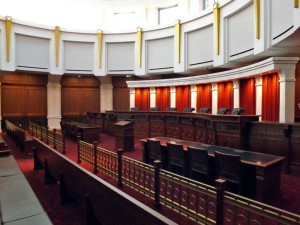 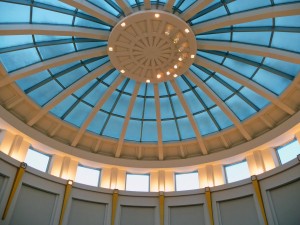 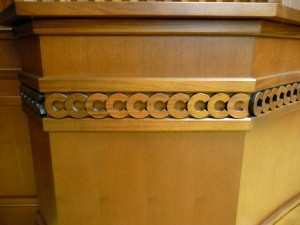 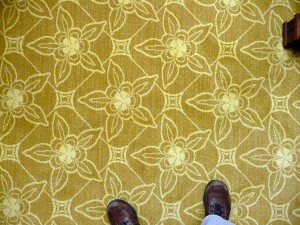 The most dramatic space in the project is the grand atrium, a voluminous public space topped by a glass rotunda that serves as the central orienting feature to the courthouse. Speaking of Colorado symbols, the floor of the grand atrium features a huge columbine design (left) and, if you stand in the middle of that columbine and look straight up at the rotunda at just the right angle, you see another big Colorado “C” (right): 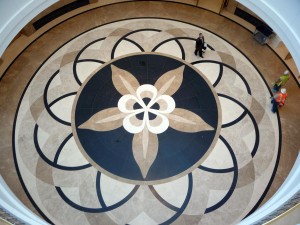 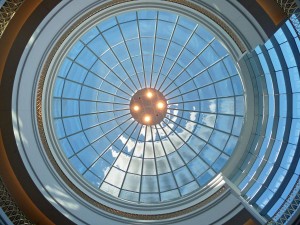 From the upper levels of the courthouse, the view out the glass-walled grand atrium looks directly at the Colorado State Capitol, currently undergoing a major renovation (left). In the courthouse’s main staircase, a dramatic piece of public art celebrates different milestones in Colorado’s history (right): 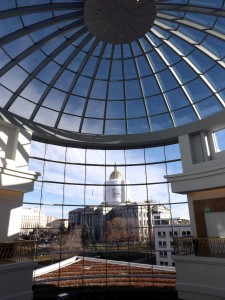 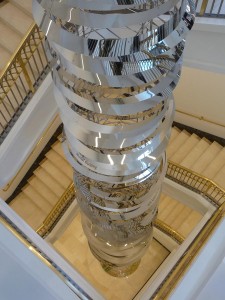 The courthouse includes the Colorado State Law Library, which features a mix of traditional library shelving, public art, and high-tech digital capabilities (left). On the right is a view of the chambers of a Supreme Court justice: 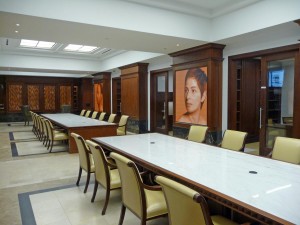 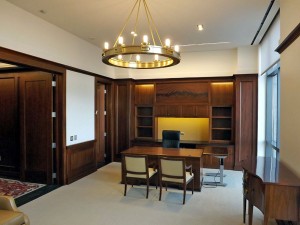 On the south side of the block rises the 12-story office tower portion of the project, which houses the Colorado Attorney General’s Office and other legal offices and agencies of the state. Here’s a photo of the main hallway leading from the courthouse to the office tower (left) and the ceiling and public art inside the atrium/reception area of the office tower lobby: 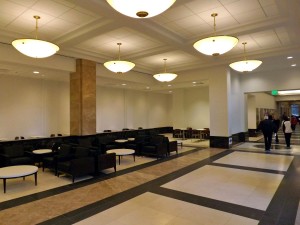 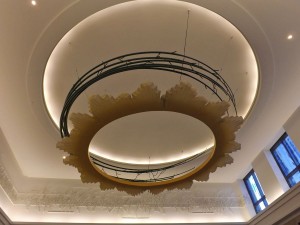 The new Ralph Carr Colorado Judicial Center is beautiful on the inside and outside, and it appropriately represents one of the three branches of state government in a dignified and civic manner. Additionally, the new Ralph Carr Colorado Judicial Center offers fantastic views of Downtown Denver! So, here are four bonus photos for your enjoyment. On the left, the view straight north up Broadway, and on the right, the view of the Denver City & County Building and Civic Center Park: 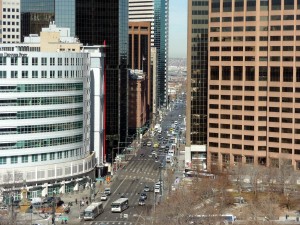 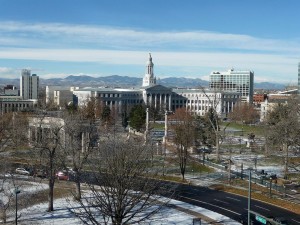 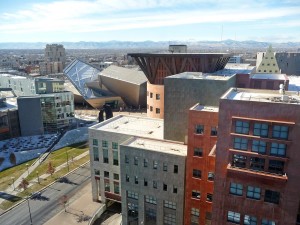 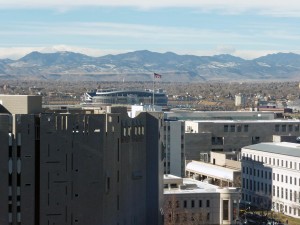