In the 1960s, the Denver Urban Renewal Authority (along with CDOT) cleared a large swath of land in what is today the West Colfax and Sun Valley Neighborhoods of Denver in order to clear what was perceived to be a slum and build the Colfax and Federal interchange. The neighborhood, which had once been a thriving Jewish neighborhood with houses and shops (Golda Meir once resided in the neighborhood; her house was saved and moved to the Auraria Campus) was replaced with a giant cloverleaf intersection, a new housing development (with 8-story towers and smaller townhomes) and a grocery store-anchored strip mall with a gas station. As the neighborhood surrounding this new shopping center continued to decline over the next few decades, the grocery store closed and sat empty for years, only recently partially filled with a new Hispanic grocer. The gas station on the corner of Colfax and Irving closed as well and was eventually torn down, leaving a two-acre lot (half paved/half gravel) that was rarely used except during Denver Bronco games. Now, like many other parking lots and vacant parcels in Central Denver, this lot is getting redeveloped. And, unlike its previous incarnation, this site is coming back to life as a mixed-use, transit oriented, urban development.

Spurred by rising real estate prices and renewed interest in the area due to construction of RTD’s West Line, the Urban Land Conservancy (ULC) moved to purchase this two-acre parking lot from the owner of the shopping center in early 2011 in order to create a transit-oriented development. The parcel, outlined in orange in the Google Earth map below, is situated less than one-half mile from two light rail stations and is accessible by four major bus routes. It is also highly visible from both Colfax and Federal and has great views over Sports Authority Field and Downtown Denver. Given the development potential, the owner was reluctant to sell the property, but ULC brought an interesting partner to the table that ultimately sealed the deal: the Denver Public Library. 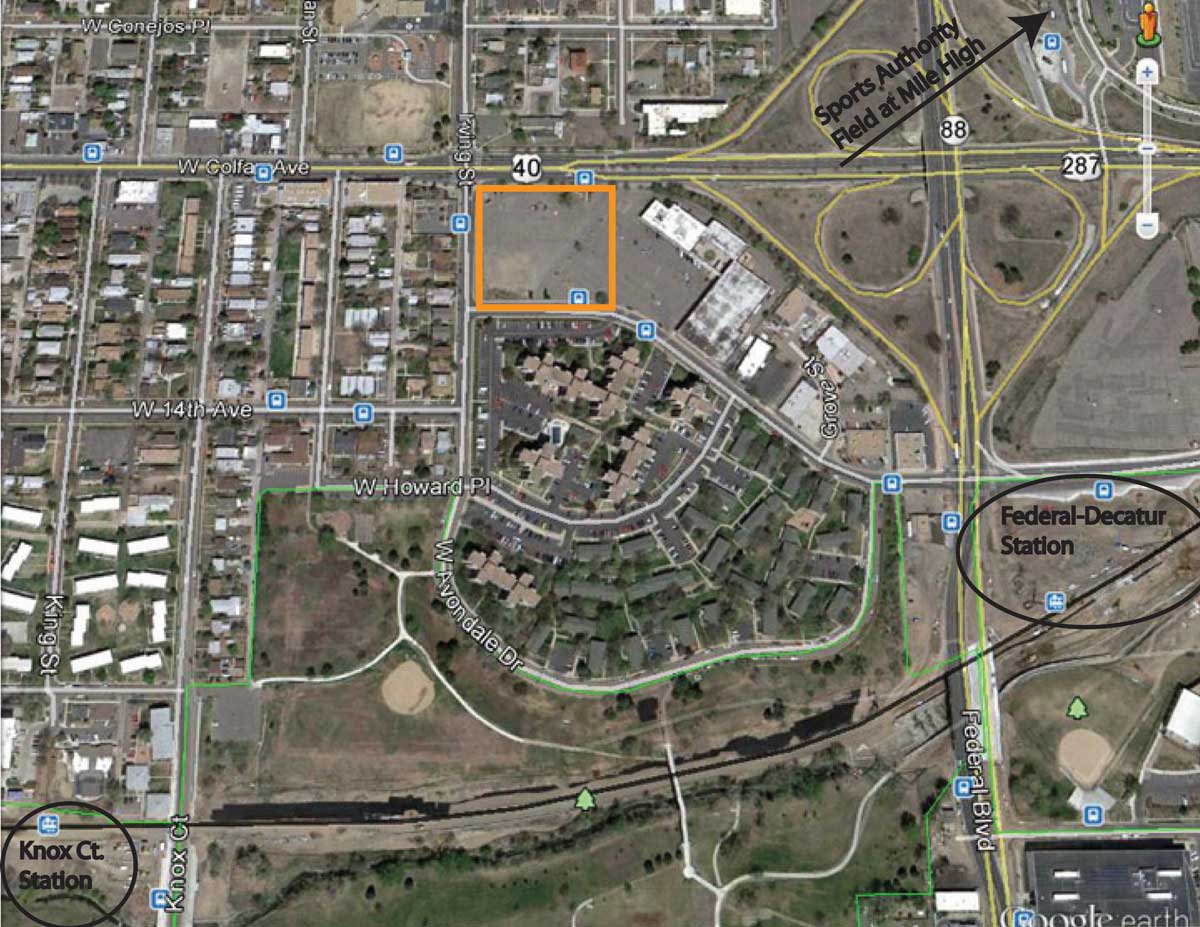 At the time, DPL was looking for a site to build a new bond-funded branch in the West Colfax Area. The library wasn’t having much luck finding an appropriate site until ULC suggested putting the library on their prized site (alongside additional commercial and retail development). The property owner loved the idea and stipulated that he would sell the land only if DPL would build its branch there. The Library Board eventually agreed and the property was bought by ULC using money from the Denver Transit Oriented Development Fund.

As shown in the two images below (courtesy of ULC and Studiotrope Design Collective), the site will contain three elements: the new branch library anchoring the corner of Colfax and Irving, a 6-story residential building to the south, and a 2-3 story commercial building also on Colfax. A parking lot for the library and commercial pad occupies the center of the property. 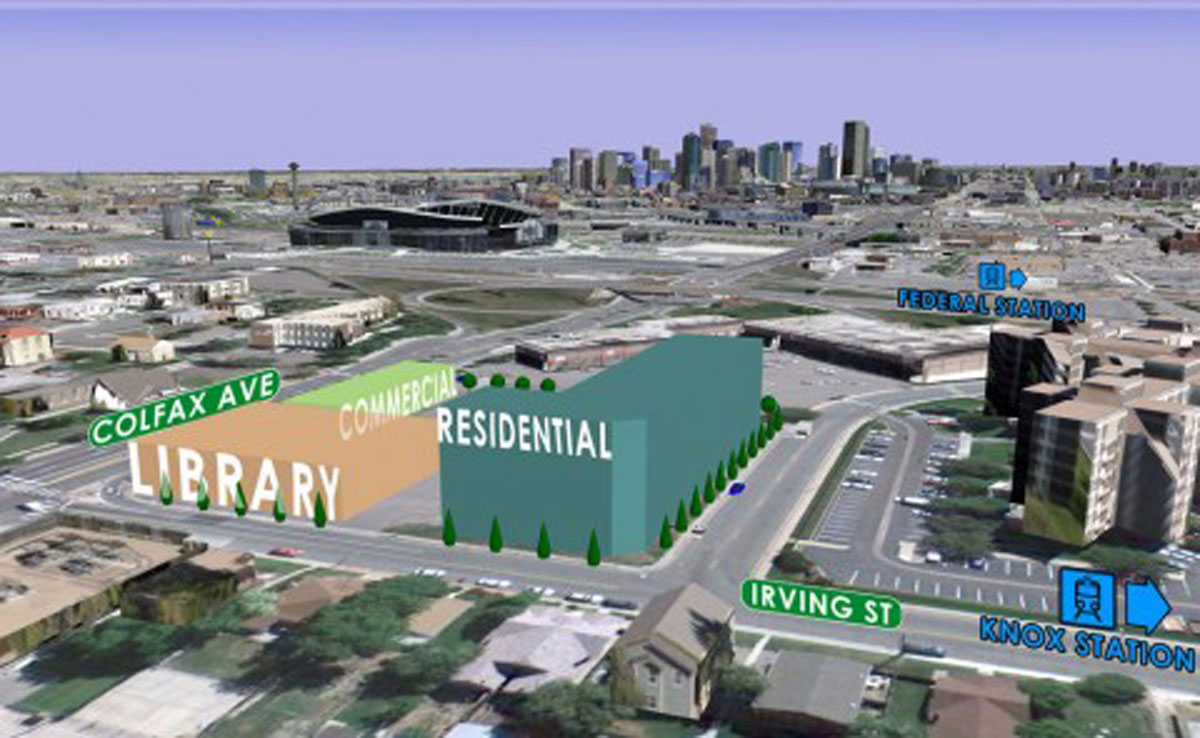 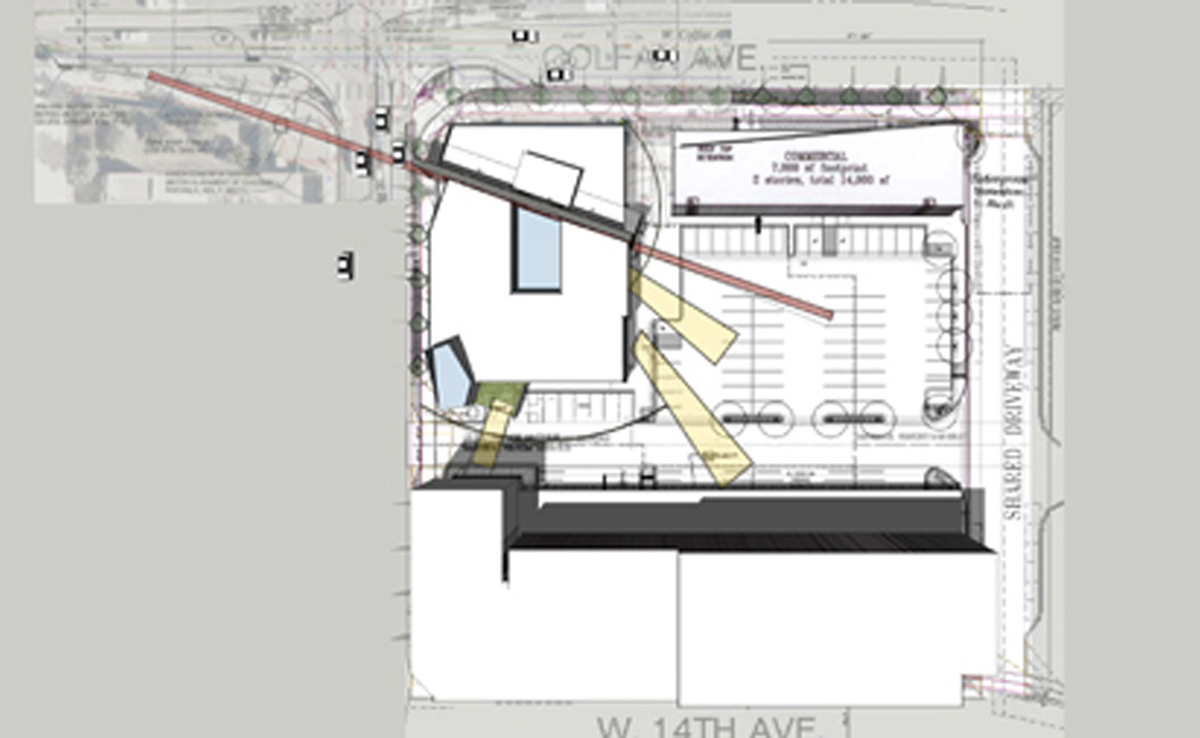 The library, designed by Studiotrope Design Collective (rendering below courtesy of DPL) will be named in honor of Rodolfo “Corky” Gonzales, an influential Hispanic civil rights leader in the Denver Community. The 25,000 square foot library will be a two-story facility with a modern façade that is intended to reflect the diversity of the neighborhood. As you can see in site phot, construction of the foundation for the library has just begun. 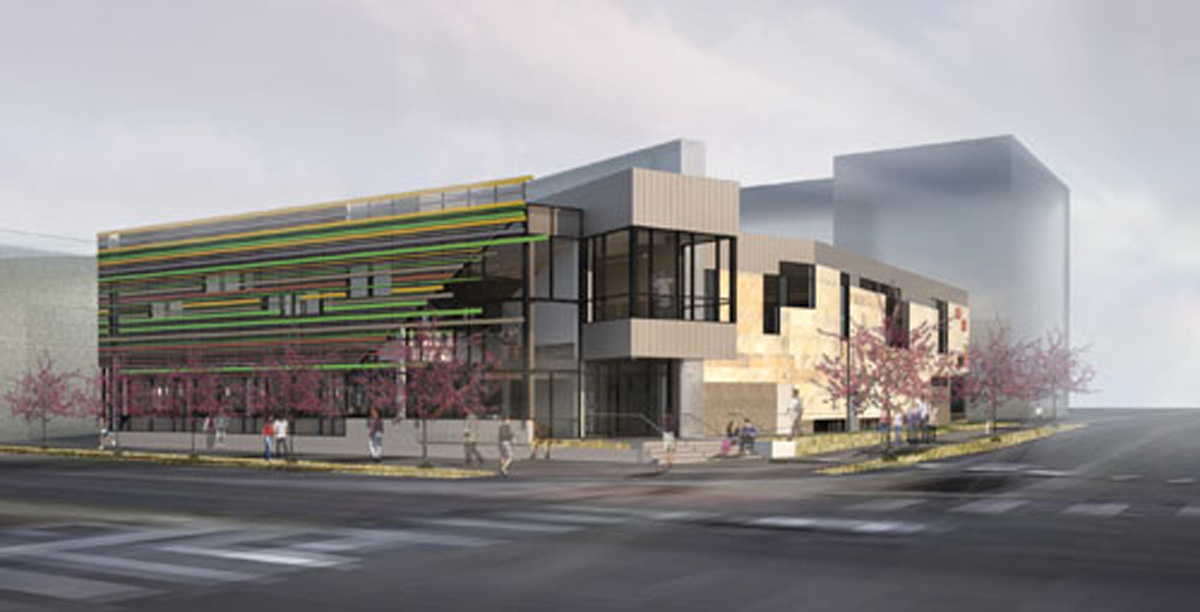 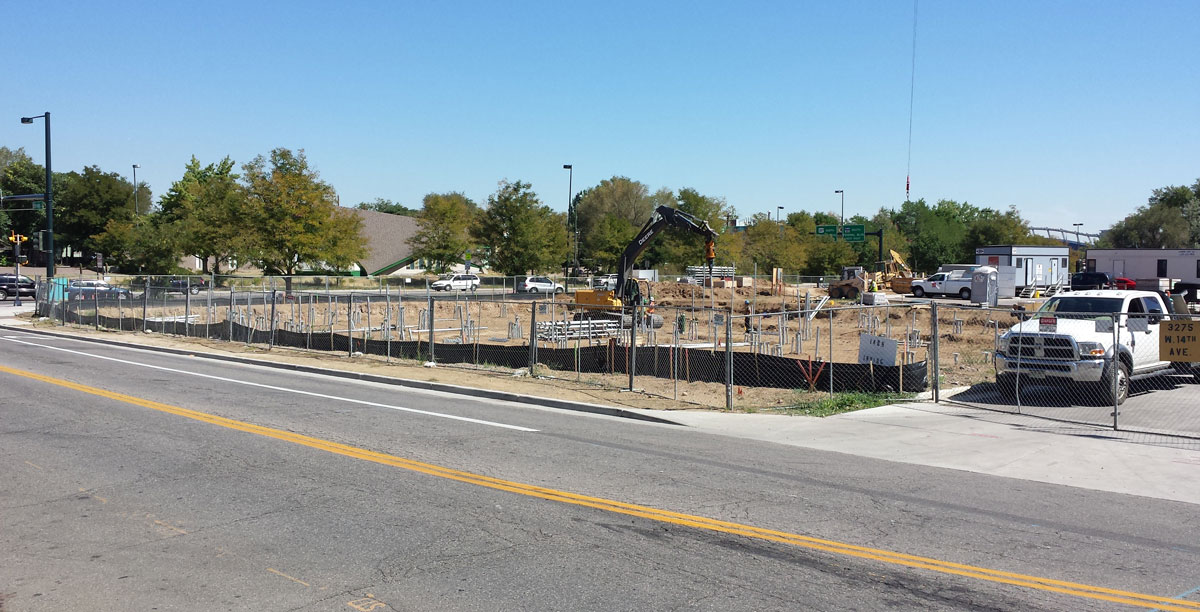 The 6-story residential building is being developed by the Del Norte Neighborhood Development Corp. The building, designed by Studio Completiva, is also under construction (renderings below courtesy of Studio Completiva). This building will have some ground-floor commercial space including a day-care facility. Parking will occupy part of the ground floor and continue on Level 2. Above will be four stories (72 units) of affordable workforce housing. 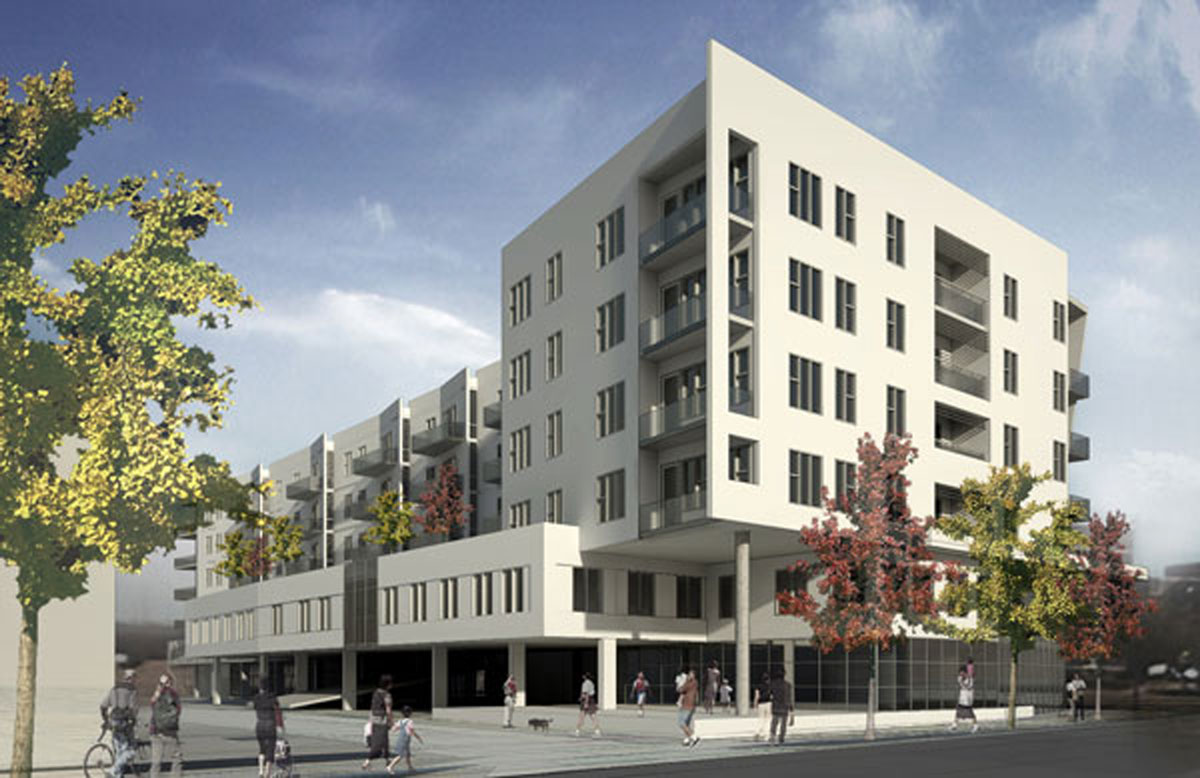 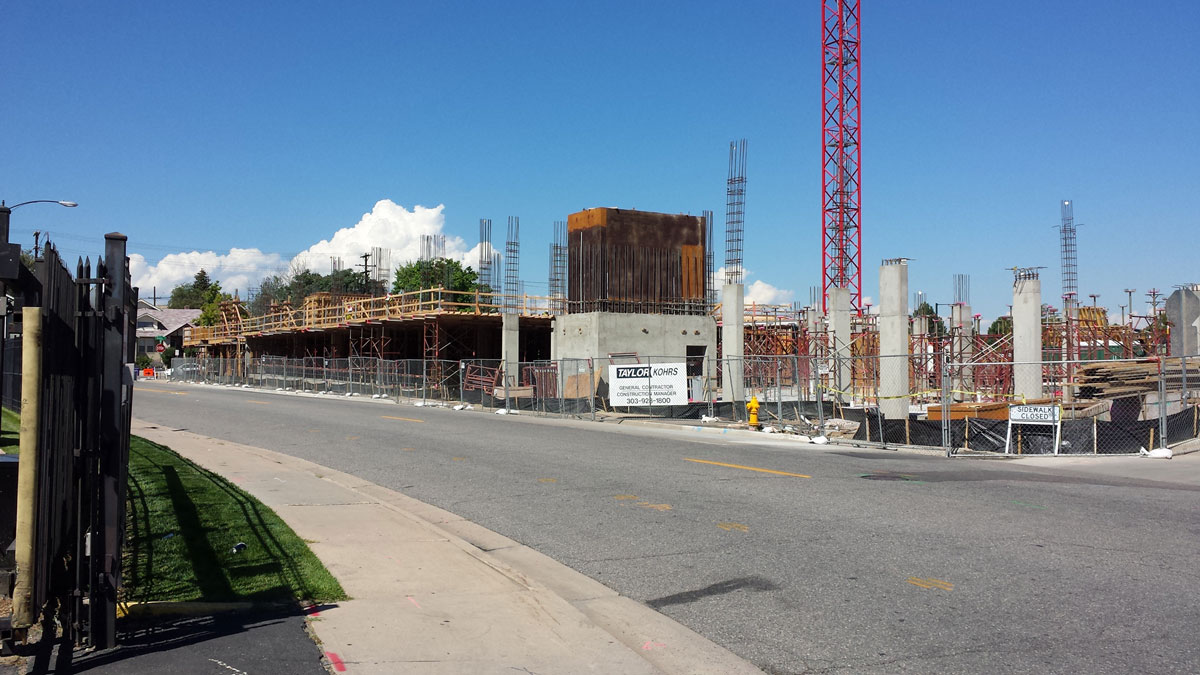 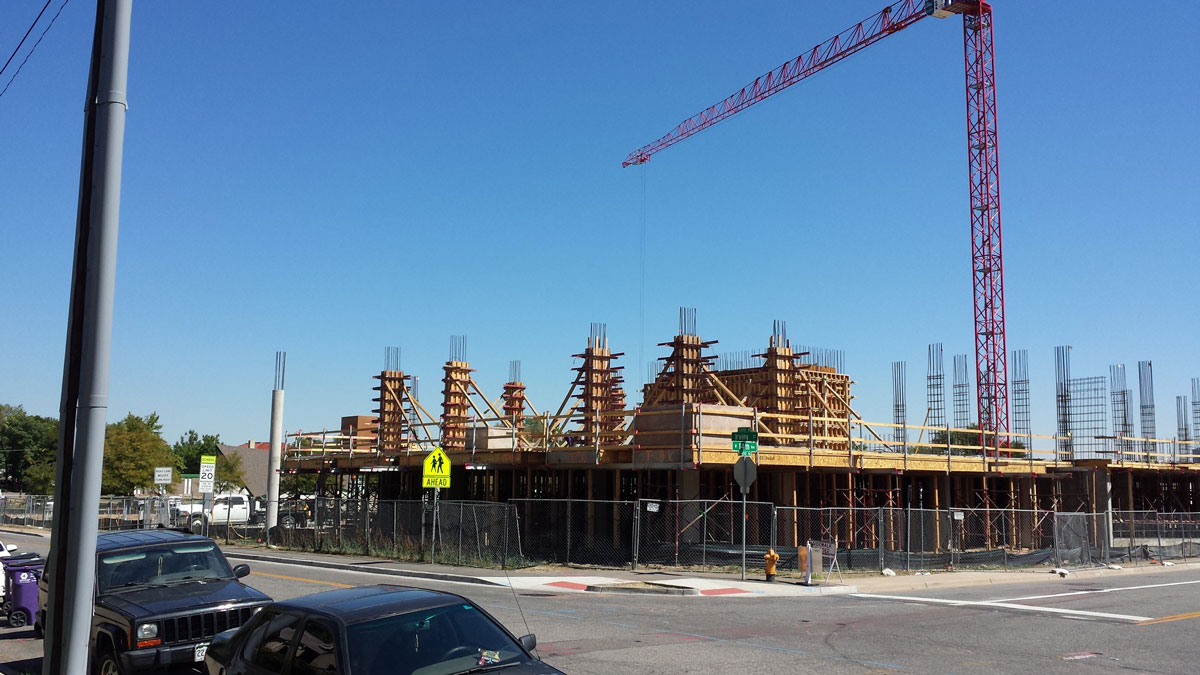 As of today, no distinct plans have been made for the third component of this development, but with construction underway on the two other components, it shouldn’t be long before plans are unveiled. With 72 units of new housing, a public library, and a commercial/retail building, the site is shaping up to be an exciting, dense, urban development that will be a new gateway for the West Colfax Neighborhood and a catalyst for more development in this up-and-coming area west of Downtown Denver. Stay tuned for more postings as this exciting project continues.

Chad Reischl is an aspiring urban planner with a background in architecture and landscape design.  He has a Master’s in Urban and Regional Planning from UC-Denver with an emphasis in urban place making and economic development.  Chad is currently a resident of the West Colfax Neighborhood of Denver and is co-president of the West Colfax Association of Neighbors (WeCAN).  He is dedicated to creating sustainable, healthy, and well connected urban communities for future generations to enjoy.