Ryan just posted the exciting news that the the 25-story SkyHouse Denver project is moving forward, as the surface parking lot where the tower will rise is currently being eradicated.

Long-time DenverInfill readers may remember our Worst Parking Lot contest of 2007. One of the five nominated lots from that contest was the surface lot at East 18th Avenue and Broadway—the one presently being dismantled for SkyHouse. While ultimately not the contest winner (that infamous honor went to the lot on Block 039 in LoDo, which is still as repugnant today as it was in 2007), we’re still very glad to see the parking lot at 18th and Broadway go away.

As part of the contest, we featured a “Before They Were Parking Lots” series of posts, which took a look at the buildings that once stood on each site. For the parking lot at 18th and Broadway, the former occupants were the Cosmopolitan Hotel and the Hotel Metropole.

Thirty-one years later, a new building will finally rise at this site. That took longer than what I’m sure most people would have hoped for, but that’s the way it goes when there are so many sites available, only so much demand to go around, and that the completion of any high-rise development is a small miracle in an of itself. Who knows, maybe SkyHouse will be the catalyst for the redevelopment of the rest of the parking lots in this part of Downtown in the near future. 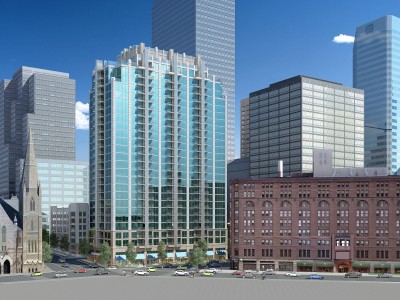 In any case, the repair of Downtown Denver’s urban fabric continues, and documenting and celebrating that process is what DenverInfill is all about. City-building is a fascinating enterprise that I, along with many of you, find exhilarating—so much so that sometimes we meet up just to talk about it!