It has been eleven months since we last tallied the number of new multifamily residential units in the Downtown Denver area, so let’s do an update on that today.

A total of 6,273 multifamily residential units have been completed within a 1.5 mile radius of the iconic D&F Tower since January 2010. The historic tower’s location at 16th and Arapahoe serves as a good geographic central point to Downtown Denver. 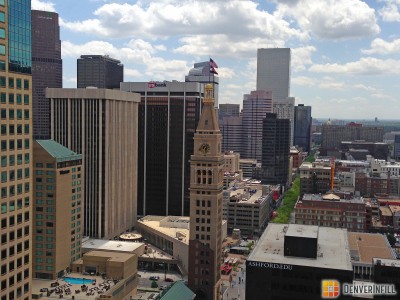 Another 4,556 units are currently under construction.

There are 1,507 proposed units if you count only those proposed developments that we have already profiled here on DenverInfill. However, there are many additional developments “in the pipeline” that we have not yet profiled. These projects range from those that stand a good chance of happening (but, for various reasons, we haven’t yet covered on the blog) to those that are at the rumor stage and/or are very early in the development process—and everything in between. Based on our assessment, these “in the pipeline” projects total approximately 4,000 units.

Click on the image below to view in full size our June 2015 Downtown Denver Multifamily Residential Projects map and table. Use this link to view/download a high-resolution PDF version (6 MB) formatted for printing at 11″ x 17″. 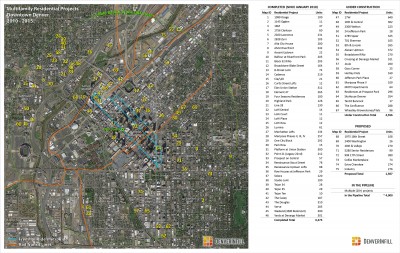 People ask me all the time if I think we are overbuilding housing in the Downtown area. Let’s crunch a few numbers to think about that question.

The Colorado State Demographer’s forecast for Denver’s 2015 population is 676,282, or an increase of about 72,000 people since 2010. The State Demographer’s data also show that 64% of Denver’s recent population growth has been as a result of net migration (36% from natural increases), and that the people migrating here are overwhelmingly in the 20-34 age range. Applying the 64% net migration rate to the 72,000 total 2010-2015 population increase means that about 46,000 additional people moved to the city of Denver (presumably needing housing) during roughly the same time period covered in our Multifamily Residential Projects exhibit above. What percentage of those 46,000 newcomers want to (or can afford to) live in the Downtown area?

Assuming an average of 1.5 persons per household (typical for Downtown-area neighborhoods from the 2010 Census), the 6,273 multifamily residential units completed in the Downtown area since 2010 represent housing supply for approximately 9,400 people. This 9,400 figure is 20% of the 46,000 number discussed above. Does it seem reasonable that Downtown might capture 20% (1 in 5) of these 46,000 new Denver residents? If yes, then we’re not overbuilding. If no, then maybe we are.

Of course, it’s not really that simple. There are dozens of other factors involved and my number crunching above is really just a quick, superficial stab at putting these Downtown housing numbers into perspective from just one angle. But the anecdotal evidence seems to suggest that all these new Downtown housing units are being absorbed at a sufficient pace to not (yet) cause panic among multifamily residential developers and market analysts.

What these new multifamily residential projects are doing is mending the holes in the urban fabric caused by accommodating the private automobile in an inappropriate, thoughtless way. They are improving the pedestrian environment by adding new sidewalks and streetscaping, ground-floor activity, and eyes on the street. They are putting more people within walking and biking distance of transit, work, school, and recreation. They are bringing us closer to having a critical mass of Downtown residents necessary for more and better retail options. They are making Downtown Denver a better place.