Yesterday we posted our Downtown Denver Residential Projects June 2016 Update, a semi-annual summary of new housing in the city’s urban core since the start of 2010. Today we take a look at all non-residential projects—office, hotel, civic, and other uses—that are completed, under construction, or proposed. Like our housing analysis, we use a 1.5-mile radius of the historic D&F tower at 16th and Arapahoe as our Downtown survey area for this summary. For our previous assessment, see our December 2015 Non-Residential Projects Update post. 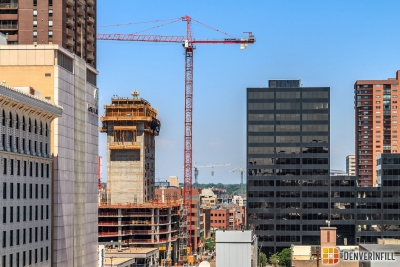 Click on the image to view our June 2016 Downtown Denver Non-Residential Projects exhibit or view/download a high-resolution PDF version (6 MB) formatted for printing at 11″ x 17″. 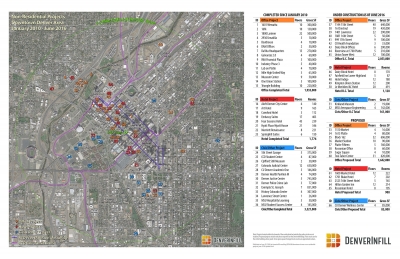 Office: The only office building completed during the past six months within our Downtown survey area was the 40,000 sf Industry Phase 3 project in River North, bringing the total square footage of office space completed since the start of 2010 to 1,933,000. However, two big projects started construction since our last update: the 430,000 sf 16 Chestnut building and the 210,000 sf Riverview at 1700 Platte project. With the other projects already in progress, that puts the total amount of new office space currently under construction in Downtown Denver at 2,053,000 sf. After all office projects currently underway are completed, about 4 million square feet of space—a significant amount in any real estate cycle—will be added to the Downtown market since 2010. In looking at the office projects still in the Proposed category, it’s likely that four of them totaling around 200,000 sf (1510 Market, 1615 Platte, Market Station, and SugarSquare) will break ground before the end of 2016.

Hotel: Downtown Denver’s hotel market continues to thrive in light of record-setting attendance at the Colorado Convention Center and the Mile High City’s emergence as an urban tourism destination in its own right. The number of new hotel rooms added to the Downtown market since 2010 stands at 1,776 and the completion of the 1,128 rooms currently under construction will put the number of hotel rooms in Downtown Denver over the 10,000 mark. Since our last update, three more hotel projects were announced (1701 Blake, 1600 Market, and 2525 16th Street) bringing the number of proposed new hotel rooms in the city center to 908.

Civic/Other: Compared to the office, hotel, and multi-family residential markets, the number of new projects falling under our Civic/Other category (uses such as cultural, educational, governmental, etc.) is fairly minimal. Currently, only two projects (Kirkland Museum and MSU Aerospace Engineering) are under construction, and only one project (CU Denver Wellness Center) is proposed and is scheduled to get underway this fall. But the few new entries in this category reflect not a lack of investment in this area but more the fact that we just finished a massive civic-projects building boom; just look at the Completed list.

Like our Multi-family Residential analysis, we added a Floor column to our exhibit this time. Here’s a bar chart showing the distribution of projects by the number of above-grade floors:

Just for fun, let’s look at all projects together—multi-family residential, office, hotel, and civic/other—to get an overall sense of the scale of new developments in the Downtown area since the start of the decade. The figures below are not just the merger of the data used to produce the bar chart above and in yesterday’s residential update. In order to avoid double-counting several mixed-use projects such as 16M, which includes both residential and office uses in one structure, I had to filter out the duplicates to come up with a list of unique buildings/projects. Also, as we did yesterday, townhome projects were eliminated from the residential data set. Anyway, here’s the frequency distribution table followed by a bar chart: 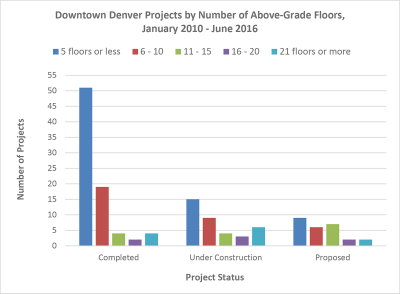 So far, 117 different projects have been completed or are under construction within the Downtown area in the past few years. That’s a lot of “urban fabric repair” going on! Of those, 23 are buildings greater than 10 stories high. And while our baseline for tracking these project is January 2010, in reality, the overwhelming majority of these projects have occurred since 2012 when the Denver economy came roaring out of the recession.

That’s it for our June 2016 summaries! You can access all of our semi-annual summaries on one page using the “Development Summary” graphic link on the right sidebar.