Today we have the second part of our semi-annual summary of the infill development activity within the Downtown Denver area. In our previous post we looked at multi-family residential developments; today we focus on non-residential projects (i.e. office, hotel, and civic/other). For our previous summaries, please visit our Development Summaries page available under our Special Features menu above, and for information about our methodology, please visit our About the Development Summaries page.

Presented below is our December 2016 exhibit for non-residential development. For a high-resolution PDF of this exhibit, click here. 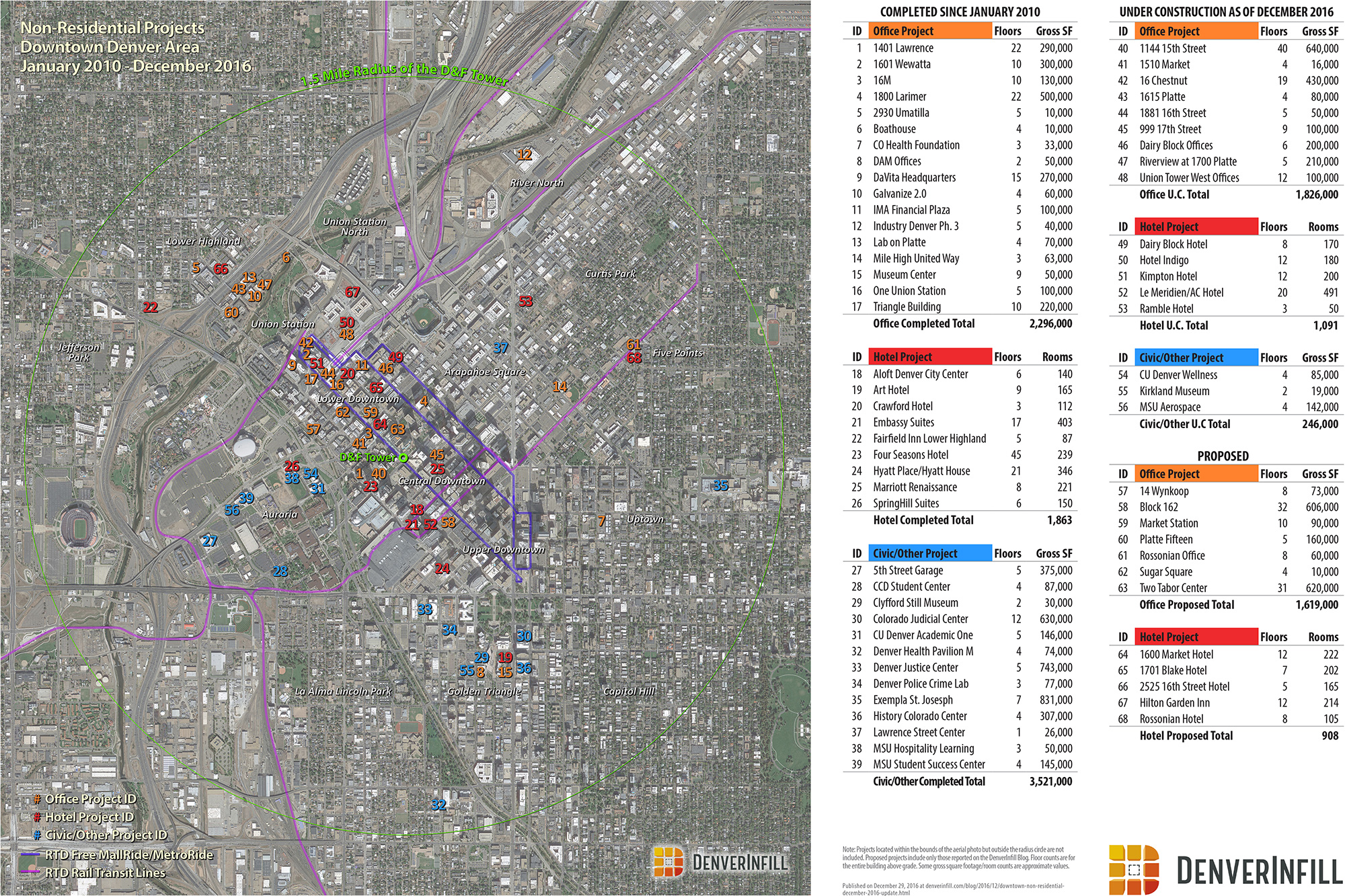 Office: One major office building (1401 Lawrence) opened since our June 2016 summary, bringing the amount of new office development completed since 2010 in Downtown Denver to about 2.3 million square feet. Two smaller office projects broke ground since June, resulting in a little over 1.8 million square feet of office space currently under construction. Add the Completed and Under Construction totals together and toss in another 300,000 SF or so of space from the Proposed column that is likely to move forward soon, and that will give us at least 4.3 million square feet of office space added to Downtown Denver this decade. And just a short distance beyond the 1.50-mile radius used for our semi-annual summaries is an additional 1.7 million square feet of office space (mostly in River North) currently under construction or formally proposed that will directly contribute to the vitality of the urban core. It has been a very good decade so far for the Downtown Denver office market.

Hotel: In the past six months, only the Fairfield Inn and Suites was completed and only one new lodging project (the Ramble Hotel) broke ground. Still, this has been a huge decade for the Downtown Denver hotel market. With 1,836 hotel rooms completed and another 1,091 currently under construction, that ensures that downtown will have at least 2,927 new hotel rooms added this decade. Several hotels in the Proposed column are likely to break ground in 2017, and DenverInfill is aware of no less than seven more hotel projects in downtown that are in various stages of planning and design.

Civic/Other: Downtown Denver has experienced a massive building boom of civic projects (government buildings, museums, hospitals, etc.) over the past twenty years, with over 3.5 million square feet of civic-related development just since January 2010, so it’s not too surprising that there’s not a lot of new civic projects proposed or under construction at the moment. However, one bright spot remains the Auraria campus, where both MSU Denver and CU Denver have buildings under construction, and it’s possible that another academic building or two will be announced before the end of the decade.

We count a total of 144 projects (residential and non-residential combined) that have been completed since January 2010 or are currently under construction within a 1.50-mile radius of the historic D&F tower. That’s a staggering amount of development in just a few years, and the overwhelming majority of these project sites were once surface parking lots, a/k/a soul-sucking black holes in the urban fabric. Thus, we have plenty to celebrate as we close out 2016 regarding the continued growth and vitality of Downtown Denver.

We’ll leave you with a photo from the roof of MSU Denver’s Aerospace and Engineering Sciences Building of the western edge of the Downtown Denver skyline. Have an urbantastic 2017, Denver!