Any Downtown Denver construction boom just wouldn’t be complete without a proposal to build the long-planned Two Tabor Center tower at 17th and Larimer. So in keeping with tradition, earlier this month, a Project Concept Plan application was submitted to the Denver planning office for Two Tabor.

This new version of Two Tabor is envisioned as a 33-story office tower rising 460 feet and featuring 680,000 square feet of rentable office space, along with a third-level outdoor deck accessible to tenants of Two Tabor and the adjacent One Tabor tower from 1984. Because the existing four-level, 1,700-space parking garage beneath the Tabor Center fulfilled the parking requirements for the entire complex, including both office towers, no new automobile parking will be added as part of the Two Tabor project.

The developer is Tabor Center owner Callahan Capital Properties. Callahan has been very busy reinvesting in the Tabor Center, having recently completed a major lobby remodel and a full reconstruction of the outdoor plaza at 17th and Lawrence. With those two important projects complete—both of which would directly connect to and serve Two Tabor—Callahan appears ready to move forward with the final piece of the Tabor Center’s master plan from the 1980s (more on that below).

As evidence that Callahan is serious about Two Tabor, check out this new website for the proposed tower, where you will find a bunch of renderings and project details. We’ve selected a few renderings from the project website to share with you below, along with a project video too. All renderings and the video are courtesy of Callahan Capital Properties and their project architects, Davis Partnership and Epstein.

First, we have a daytime view of Two Tabor’s striking angled glass facade facing the plaza at 17th Street (left), and an evening view from across 17th and Lawrence (right) showing the tower’s curved glass facade towards the 16th Street side of the block, mirroring One Tabor’s rounded corner: 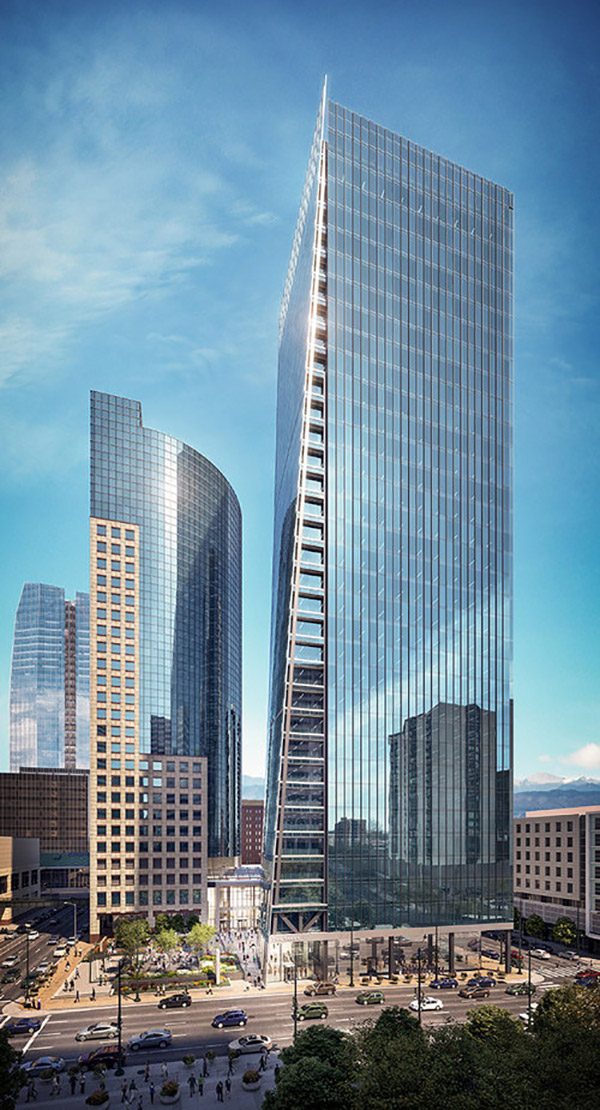 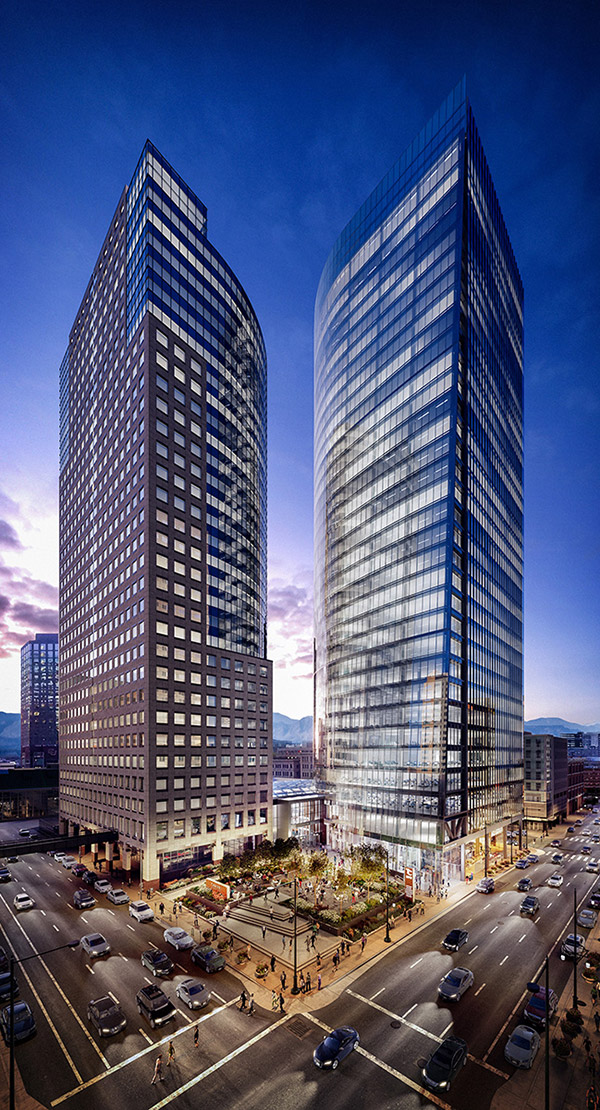 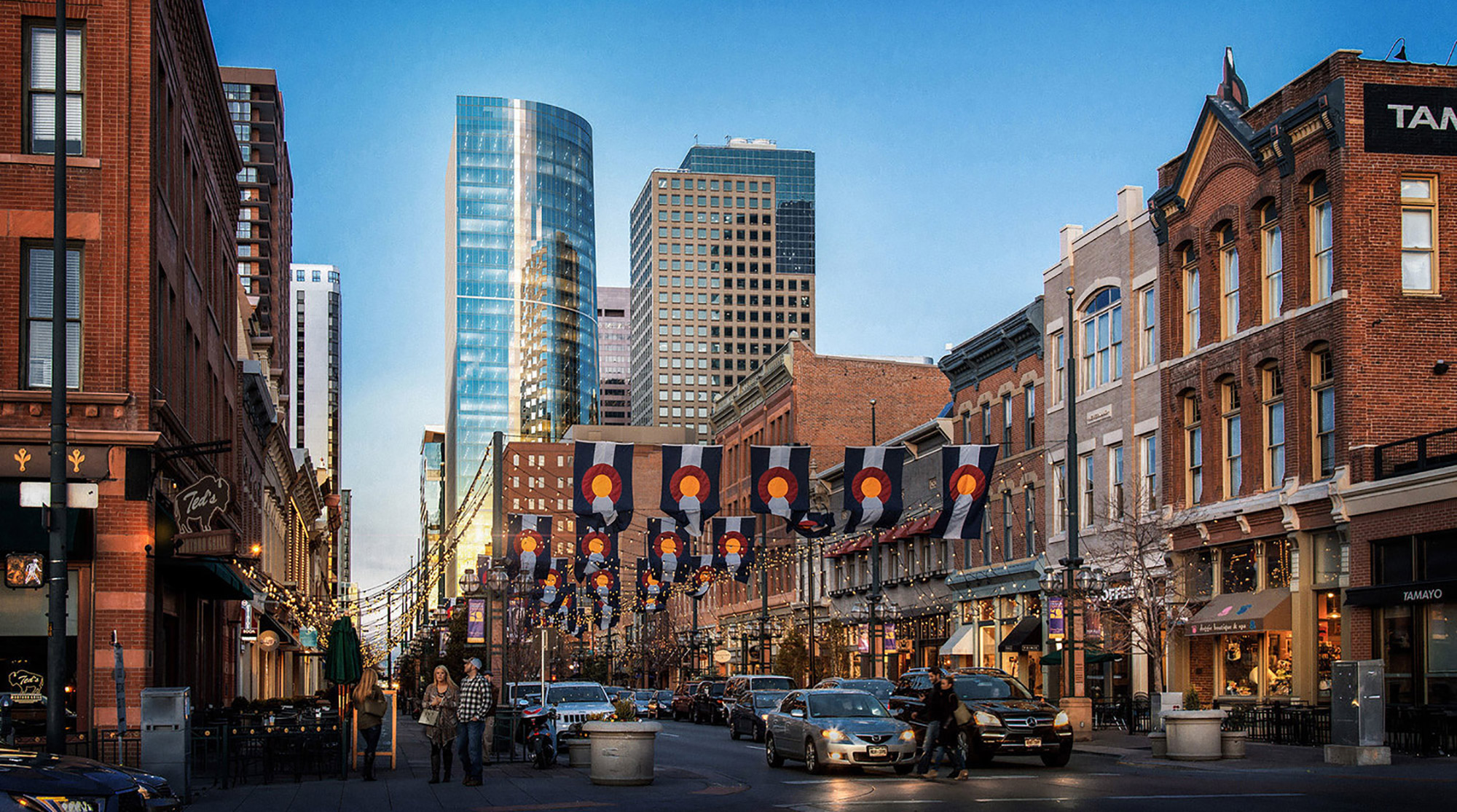 Finally, we have a rendering of the new plaza at 17th and Lawrence (completed) and the video from Callahan Capital Properties: 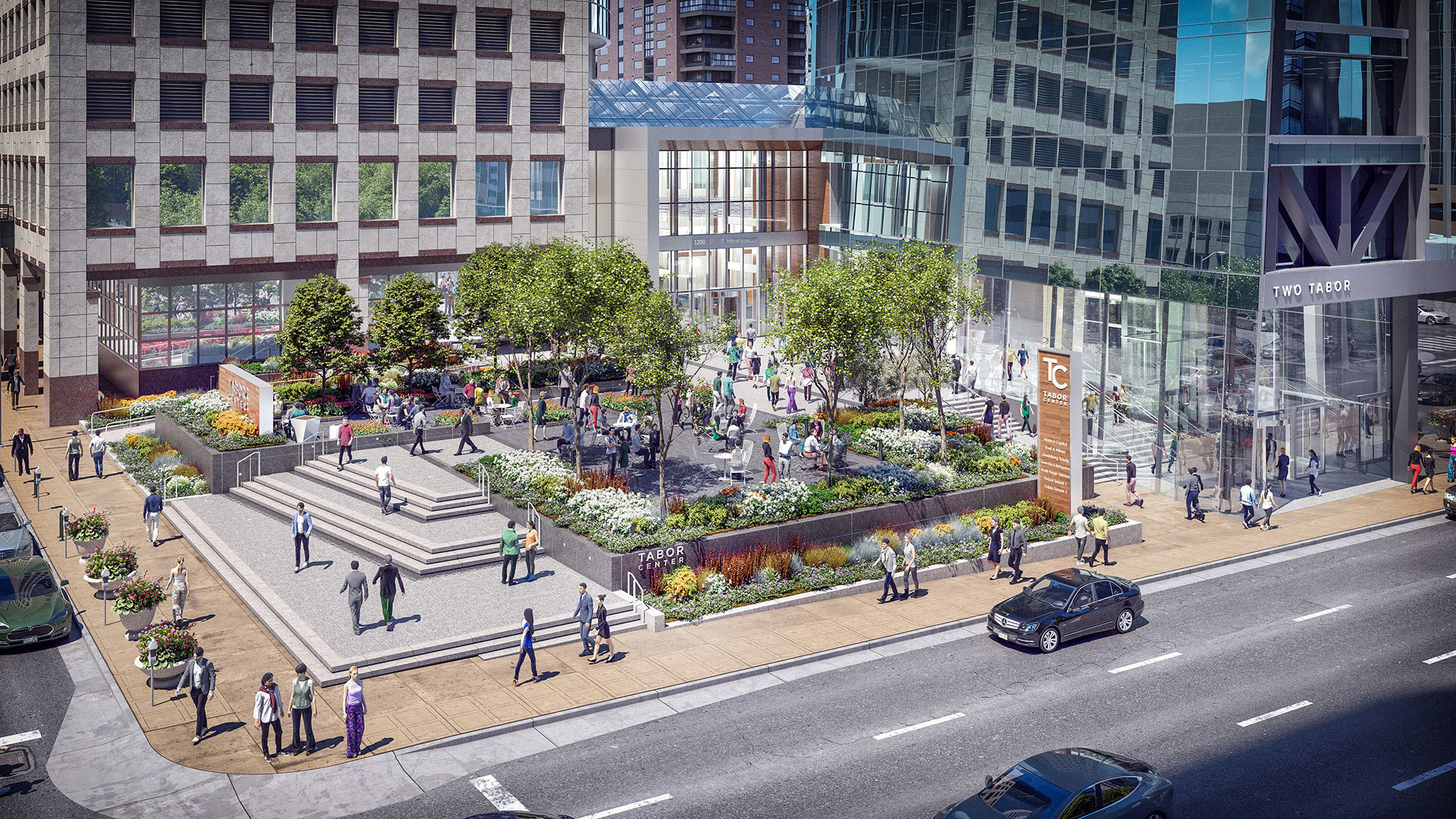 Now, for those of you not familiar with the history of Two Tabor, here’s a quick review. The Tabor Center master plan from the early 1980s (left image below) envisioned a three-level shopping mall along 16th Street, a 19-story hotel, and two office towers: one 30 stories (One Tabor) and the other around 40 stories (Two Tabor). What got built by 1984 was everything but Two Tabor, although work actually did get started on Two Tabor’s base before the project came to a screeching halt in 1985 due to the energy and real estate bust. At the corner of 17th and Larimer today, metal panels hide Two Tabor’s unfinished base from its unsuccessful 1985 start (right image below—courtesy Google Earth). 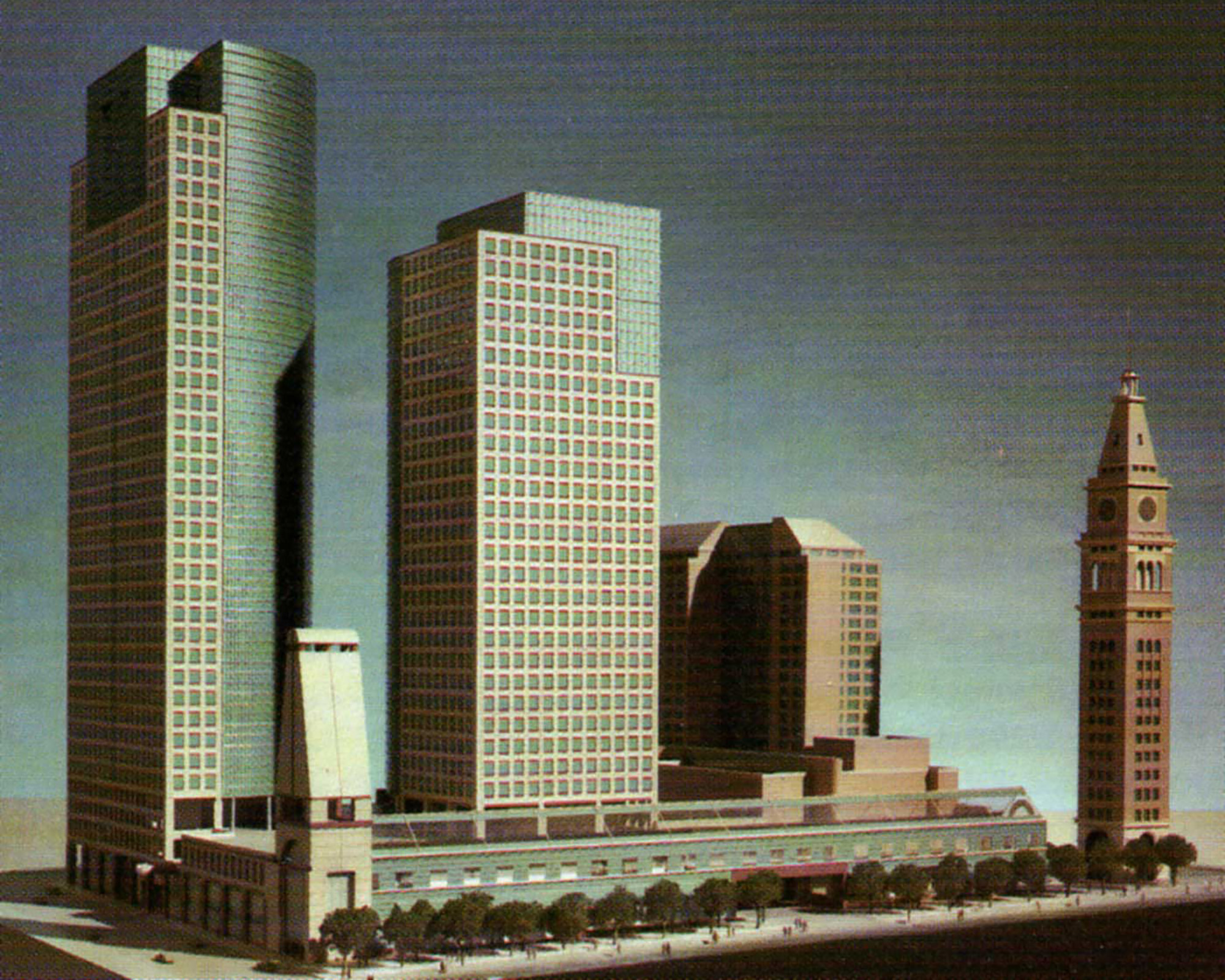 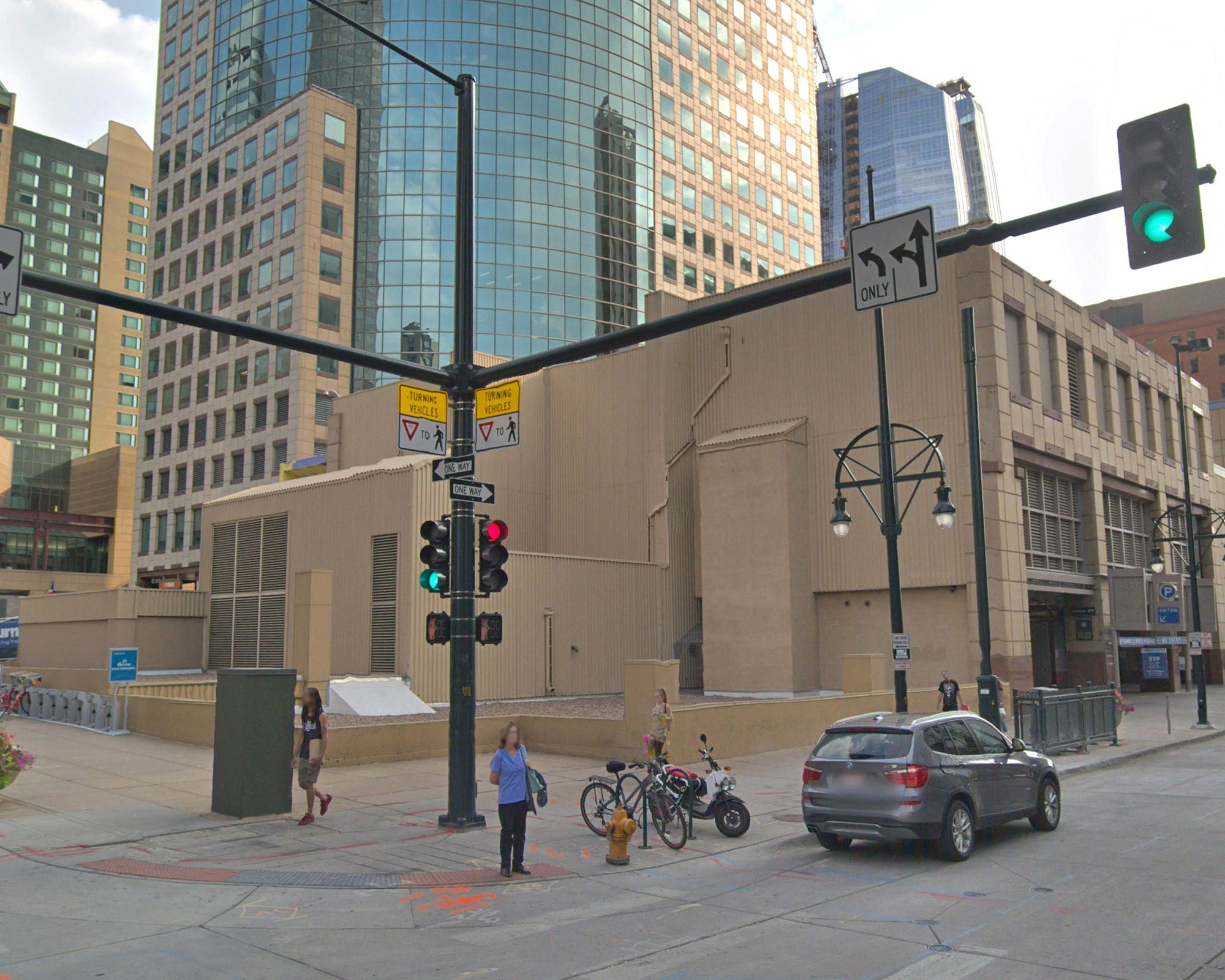 Since then, Two Tabor’s plans have been revived numerous times, usually at least once per real estate cycle. Click here to review our 11 previous posts on Two Tabor stretching back to 2006, showing at least five different designs and floor counts ranging from 30 to 40 floors.

Hopefully this time, Two Tabor will move from concept to construction to completion and bring what looks to be a very sleek, architecturally-significant addition to the Denver skyline.