Today we review the non-residential development activity (i.e. office, hotel, and civic/other) in downtown Denver. Only projects within a 1.50-mile radius of the historic D&F Tower at 16th and Arapahoe, which covers downtown proper plus the closer-in parts of the downtown-edge neighborhoods, are included in this analysis. For our previous semiannual summaries, please go to the Special Features menu above. Yesterday, we reviewed multifamily residential development in the downtown area.

Below is our new Downtown Denver Non-Residential Projects summary map and table covering the time span of January 2010 to June 2018. For a high-resolution PDF of the exhibit, click here. 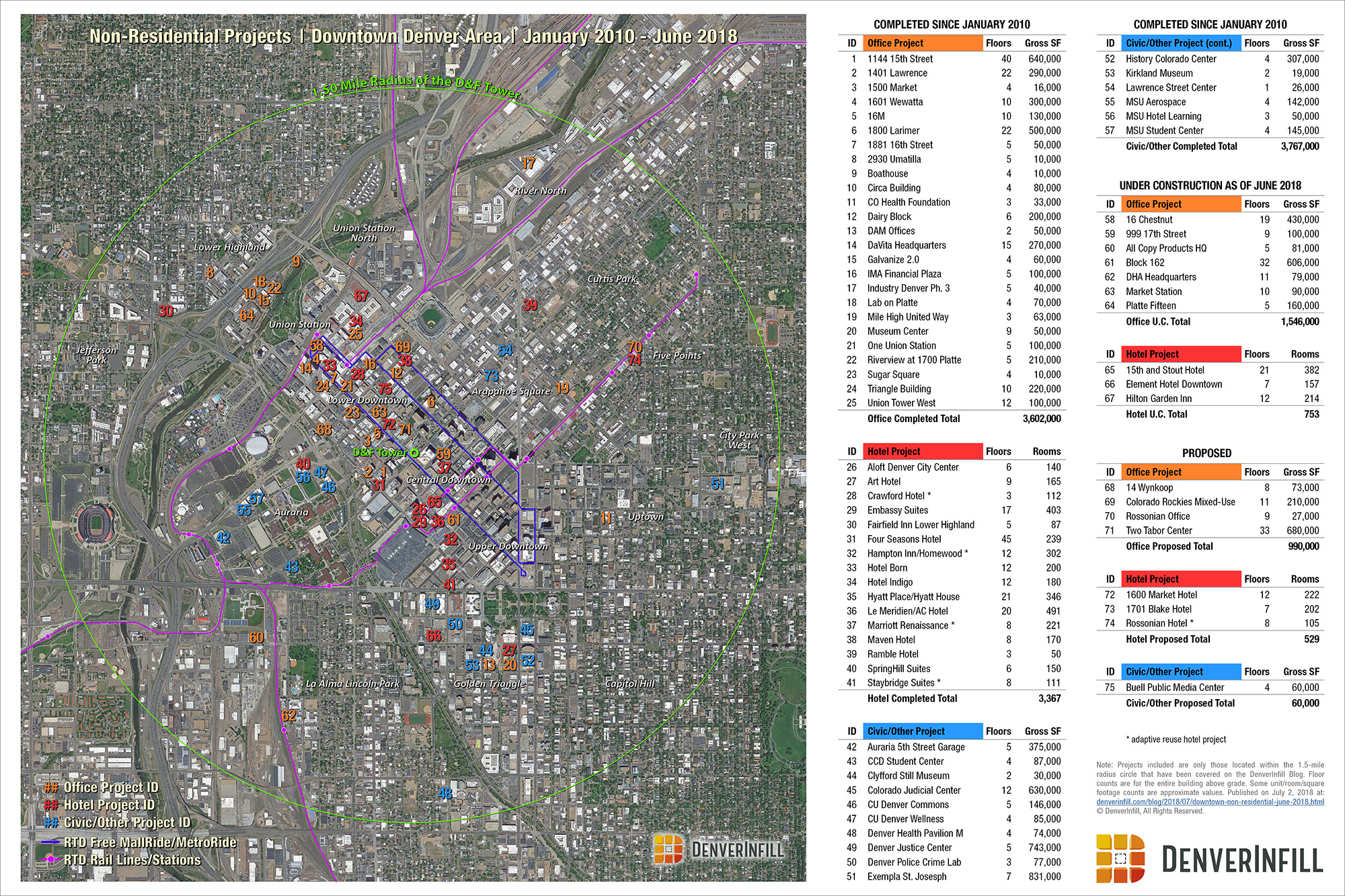 Office: Four office buildings have been completed in downtown since our December 2017 summary. They range from the tiny SugarSquare to the towering 1144 Fifteenth, with Platte Street’s Circa and Riverview buildings in between. These bring the amount of new office space completed in Downtown Denver since 2010 to about 3.60 million square feet.

Two new office developments broke ground since the start of the year: Platte Fifteen, which will be downtown’s first cross-laminated timber structure, and the 30-story Block 162 tower—a project that finally brings new infill to a block that’s seen a lot of development drama over the past twenty years—resulting in approximately 1.55 million square feet of office space currently under construction. Block 162 won’t be finished until late 2020, so we’ll probably end up with about 4.50 million square feet of office space completed in Downtown Denver this decade. Pretty good!

The only new office project to join the Proposed column is the Colorado Rockies Mixed-Use development that will include about 210,000 square feet of office space.

Hotel: Two smaller hotel developments were finished in the past six months: the beautiful brick Ramble Hotel on Larimer Street and the Staybridge Suites, an adaptive reuse of an old office building at 333 West Colfax. Together they account for 161 new rooms, bringing the total number of new hotel rooms added so far this decade to the downtown market to 3,367. (Unlike the other use categories, we’ve included new hotels developed in existing buildings as adaptive reuse projects to give us a complete accounting of all new downtown hotels.)

No new hotel projects started construction since our December 2017 summary.

Under the Proposed category, the 1600 Market Hotel is believed to still be an active proposal despite no new news in quite a while, but the 1701 Blake project is rumored to be dead. Two recently announced hotels, the 19th and Grant Street Hotel and the hotel in the Colorado Rockies Mixed-Use development, are both under active review with the city but remain missing from our summary table and map as the number of hotel rooms for each has not yet been announced. With the three hotel projects under construction likely to be open by the end of 2019, it looks Downtown Denver will gain 4,120 new rooms this decade, an impressive number that reflects Denver’s booming convention business and the city’s emergence as an urban tourism destination.

Civic/Other: There was limited activity in the Civic/Other category in the past six months, with only the CU Denver Wellness Center joining the Completed column. New public projects are in the works though, thanks to the passage of the city’s $937 million 2017 GO bond package. The Colorado Convention Center Expansion, the Denver Art Museum’s new Welcome Center, and Denver Health’s new Outpatient Medical Center are all on the horizon, with DenverInfill posts on these projects coming in the near future.