As part of our special semi-annual series of posts, yesterday we reviewed multifamily residential development in the Downtown Denver area; today we will look at the non-residential development (office, hotel, and civic/other) that has occurred in downtown since our summary in June 2018. Like before, only projects within a 1.50-mile radius of the historic D&F Tower at 16th and Arapahoe are included. For our previous semiannual summaries, please go to the Special Features menu above.

Below is our new December 2018 Downtown Denver Non-Residential Summary exhibit. You can view/download a high-resolution PDF version (about 5 MB) of the exhibit here. Go to the Projects menu or use the Project Map under the Special Features menu to view the posts on any particular project. 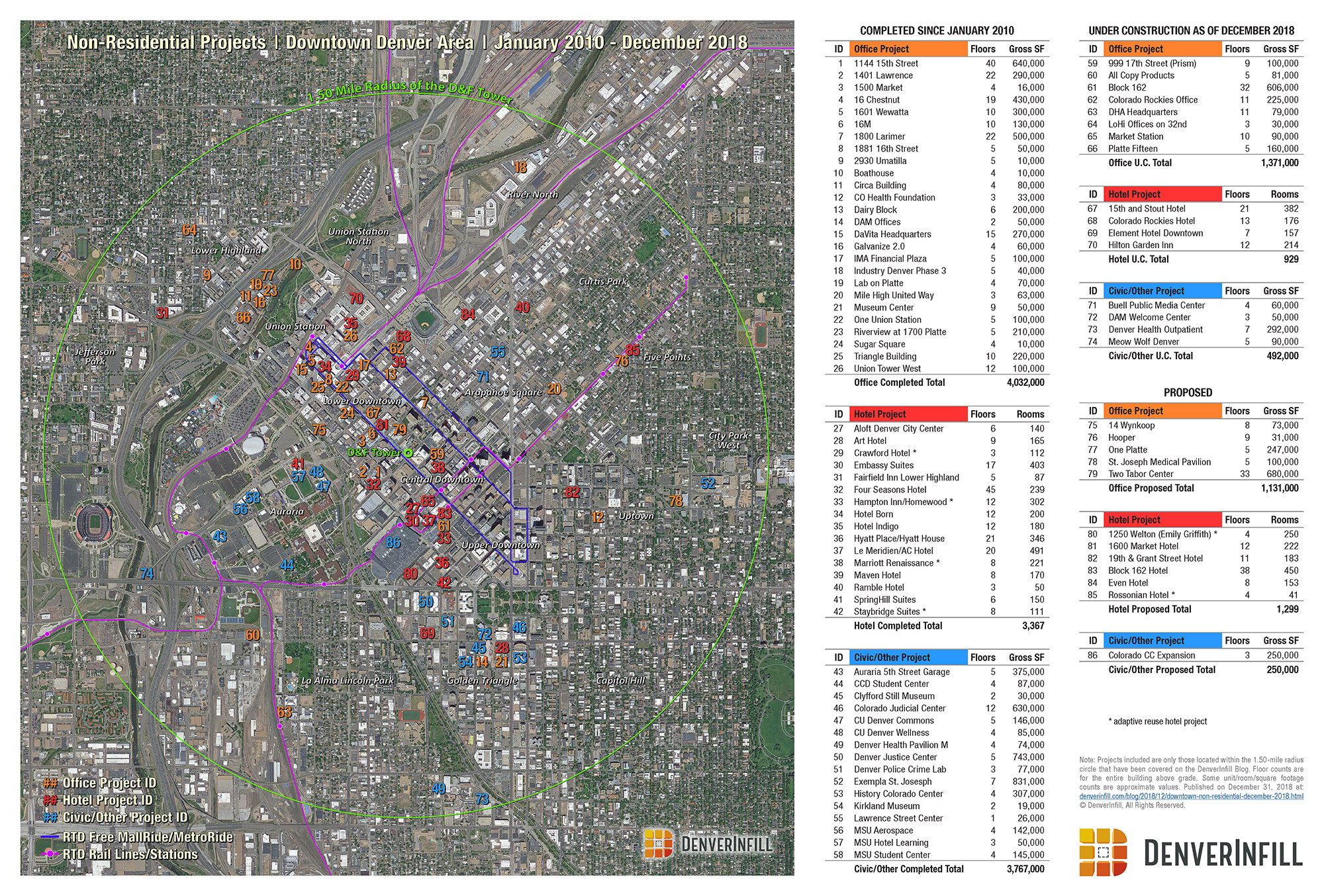 Office
Since our June 2018 summary, only 1 office building wrapped up construction during the past six months, the 430,000 square foot 16 Chestnut, with DaVita occupying most of the building as part of their HQ campus and Slack as the other main tenant. This brings the total square footage of new office development completed within our downtown survey area since January 2010 to 4,032,000.

Joining the Proposed category this period were 2 new office developments with a combined 347,000 square feet: the 247,000 square foot One Platte project and the 100,000 square foot St. Joseph Medical Pavilion, bringing the total square footage of proposed office space to 1,131,000. However, a big chunk of that—680,000 square feet—is for Two Tabor Center, the office tower that has been on a 33-year quest to exist. We got excited in March when a sleek new tower design and marketing website were revealed, followed in May by the submittal of a Site Development Plan to the city. But not much has happened since.

Below: The nineteen-story 16 Chestnut building next to the Millennium Bridge was the only downtown office development to finish construction in the past six months. 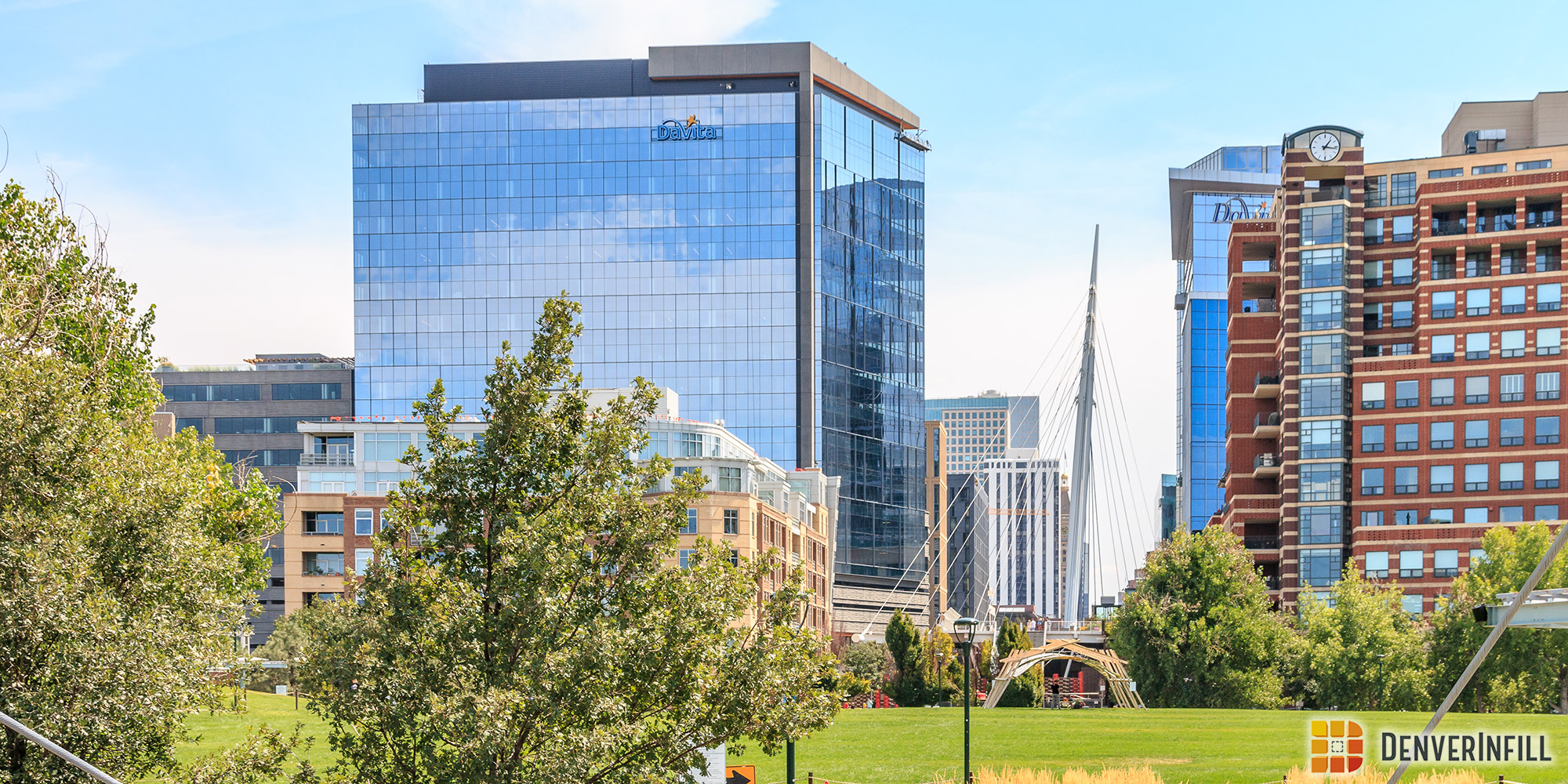 Hotel
No downtown hotels were finished in the past six months, so our Completed total still stands at 3,367 new downtown hotel rooms since January 2010.

However, we did have 1 hotel break ground recently: the 13-story hotel with 176 rooms that is part of the Colorado Rockies Mixed-Use project next to Coors Field. Altogether, there are currently four hotels under construction in the downtown area with a combined 929 rooms. Three of those hotels totaling 753 rooms should open by the end of 2019, so adding that to our Completed total of 3,367 gives us 4,120 rooms in 19 new hotels for Downtown this decade and approximately 11,000 hotel rooms in Downtown overall.

Developers are still bullish on the downtown hotel market, with 3 new hotels proposed this period totaling 853 rooms. One of these newly proposed hotels is an adaptive reuse of the Emily Griffith Opportunity School building on Welton. Unlike our residential, office, and civic/other categories, we include adaptive reuse hotel projects in our development summaries since there are only a few of these types of hotel projects (tagged with asterisks in the exhibit table) and including them in our tally gives us a complete accounting of all new downtown hotels. The biggest of the proposed new-construction hotels is the Block 162 Hotel, coming in at 38 stories and 450 rooms. One proposed hotel project, 1701 Blake, has been cancelled, so we have removed it from our exhibit map and project list. In total, there are now six hotels with a combined 1,299 rooms in the Proposed column.

The one hotel we were hoping would be under construction by now is the 1600 Market Hotel. But don’t worry, that project is almost finished with its building permit approvals and it is on the January agenda for the Lower Downtown Design Review Board for a revision to some facade details, so it is still very much alive. Hopefully, that project will get underway soon into the new year. Finally, there are a couple of big “in the pipeline” hotel projects that may become public in the coming months. Stay tuned!

Below: Construction started this fall on the Colorado Rockies Mixed-Use project that includes a 13-story, 176-room hotel. 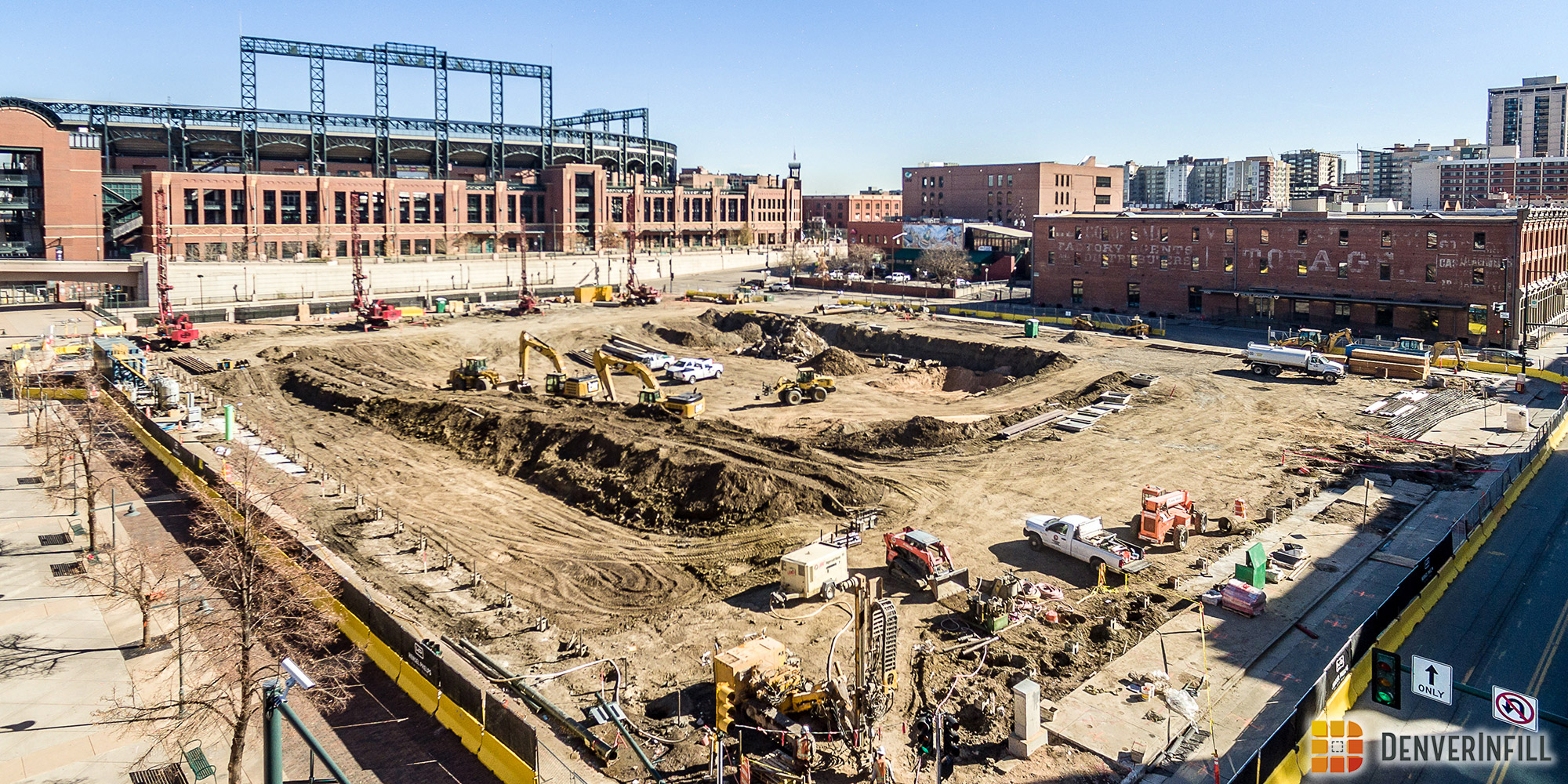 Civic/Other
Several civic, cultural, and community-oriented projects got started in the past six months, such as the Buell Public Media Center, Denver Health’s Outpatient Center, and Meow Wolf Denver. Also under construction is the Denver Art Museum’s Welcome Center and North Building renovation which, along with the Denver Health project, were made possible due to support by Denver voters in the November 2017 election. Voters approved $937 million in civic projects as part of the Elevate Denver bond program. 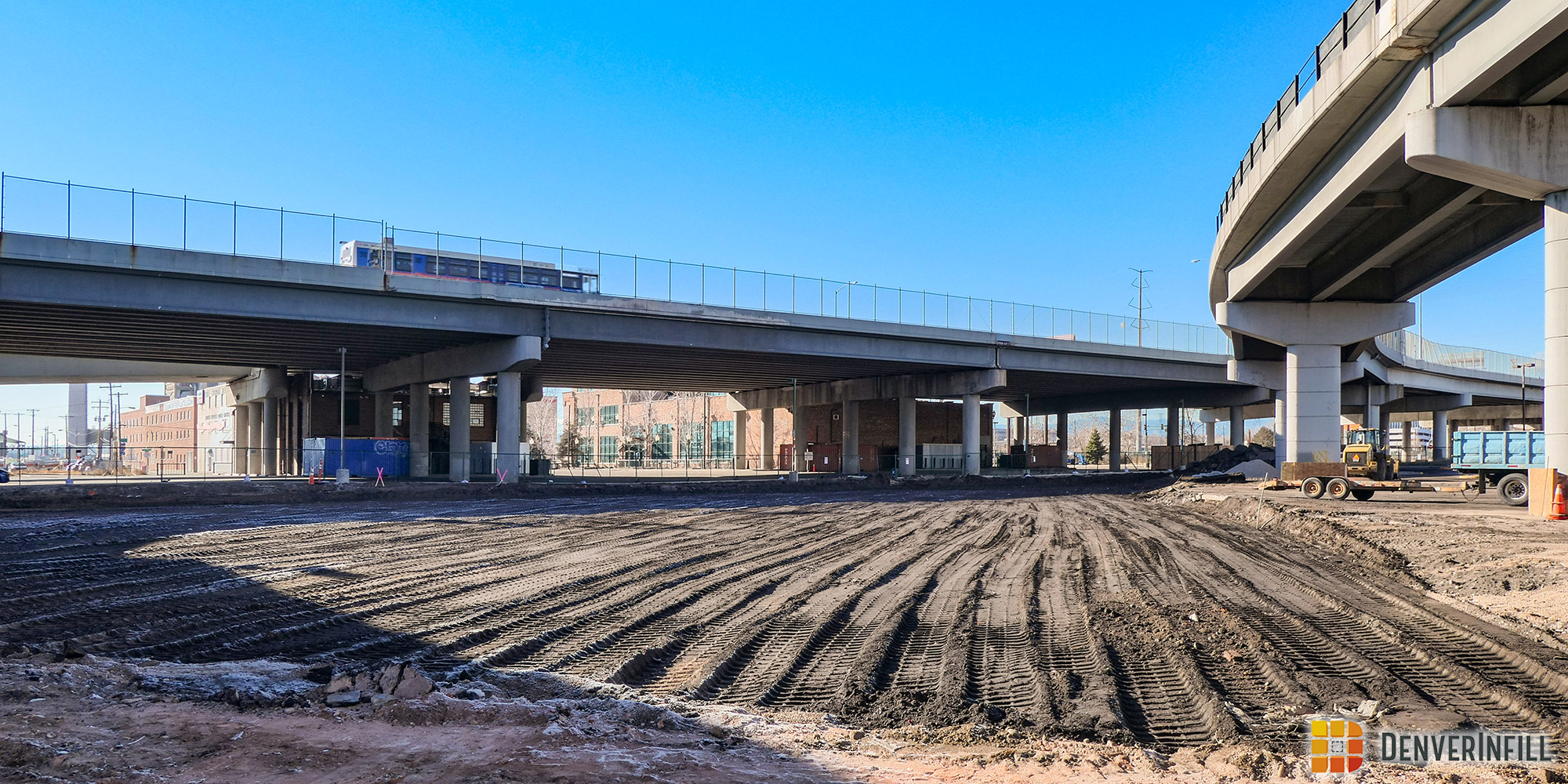 In all, these new buildings represent roughly $6 billion of investment in downtown. And a lot of ugly surface parking lots have been eradicated in the process too, making downtown significantly better for the pedestrian, the priority of any great urban center.

That’s it for this summary! Coming up for our first two posts in 2019, we’ve got our 3D Future Skyline feature and our winter Tower Crane Census.