As we close out 2018, the time has arrived for our semi-annual Downtown Denver development summaries. Today we review multifamily residential projects, and in the next few days we’ll have our non-residential (office, hotel, and civic/other) summary, our 3D Future Skyline feature, and our winter Tower Crane Census. For our previous development summaries, please look under the Special Features menu above.

As always, our summary includes only the projects located within a 1.50-mile radius of the historic D&F tower at the corner of 16th and Arapahoe, an iconic landmark at the geographic center of Downtown Denver. A 1.50-mile radius (about a 30 minute walk) nicely covers the downtown core plus the closer-in parts of the downtown-edge districts like Uptown, Five Points, River North, and Lower Highland. Our baseline for tracking projects is the start of the decade, January 2010. Townhome/rowhouse projects and adaptive reuse developments are not included.

Below is our new December 2018 Downtown Denver Residential Summary exhibit. You can view/download a high-resolution PDF version (about 5 MB) of the exhibit here. To view the posts we’ve published for any project, go to the Projects menu above or check out our Project Map under the Special Features menu. 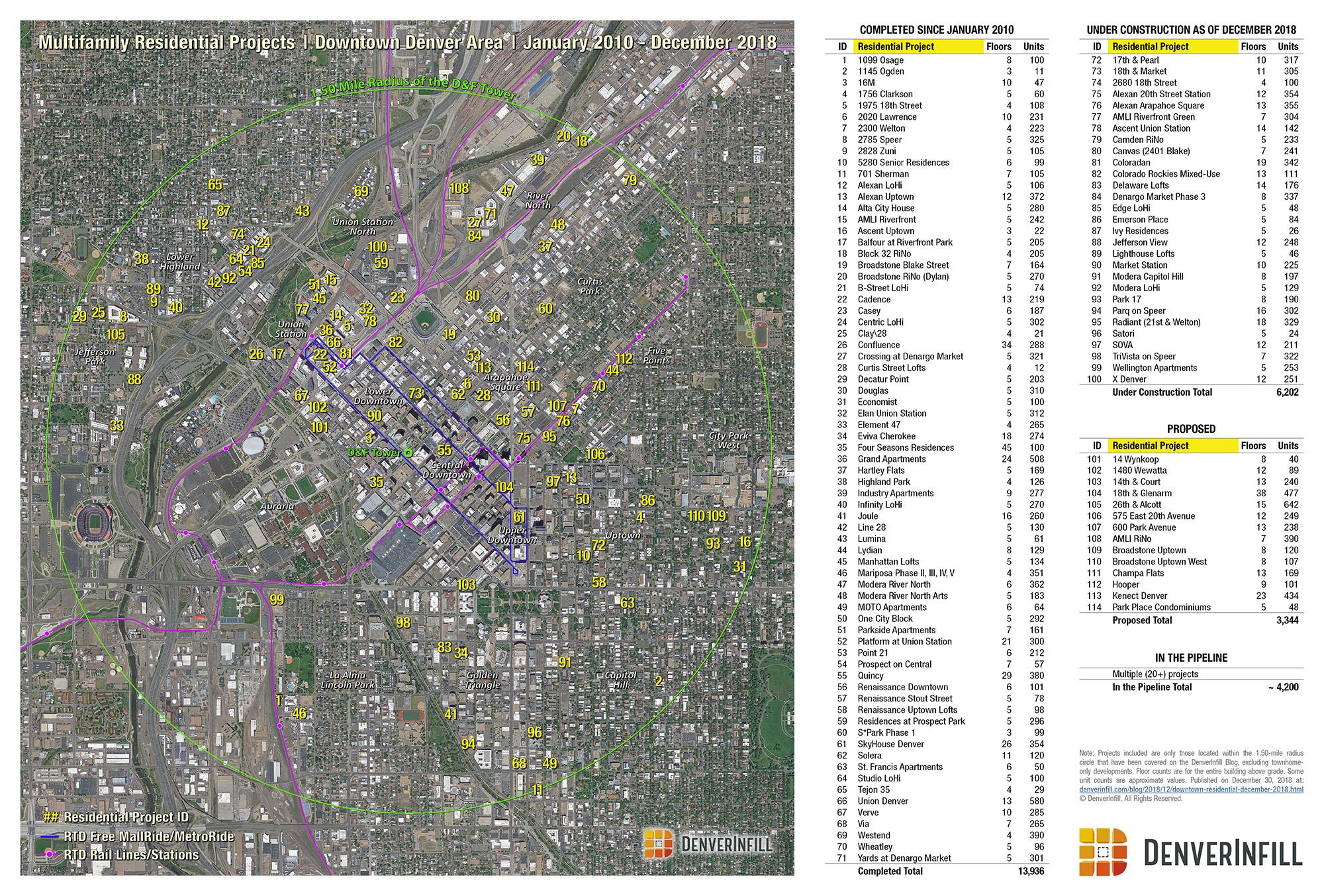 Completed Projects
Since our June 2018 summary, 6 projects totaling 1,274 residential units were completed in our survey area, bringing the total number of new homes in multifamily developments built in the downtown area since 2010 to 13,936. Those newly completed projects include the Economist, the Grand, Industry Apartments, the Lydian, Parkside Apartments, and S*Park.

Below: The Grand was the largest residential project to be completed in Downtown Denver in the past six months, adding 508 homes to the Union Station district. 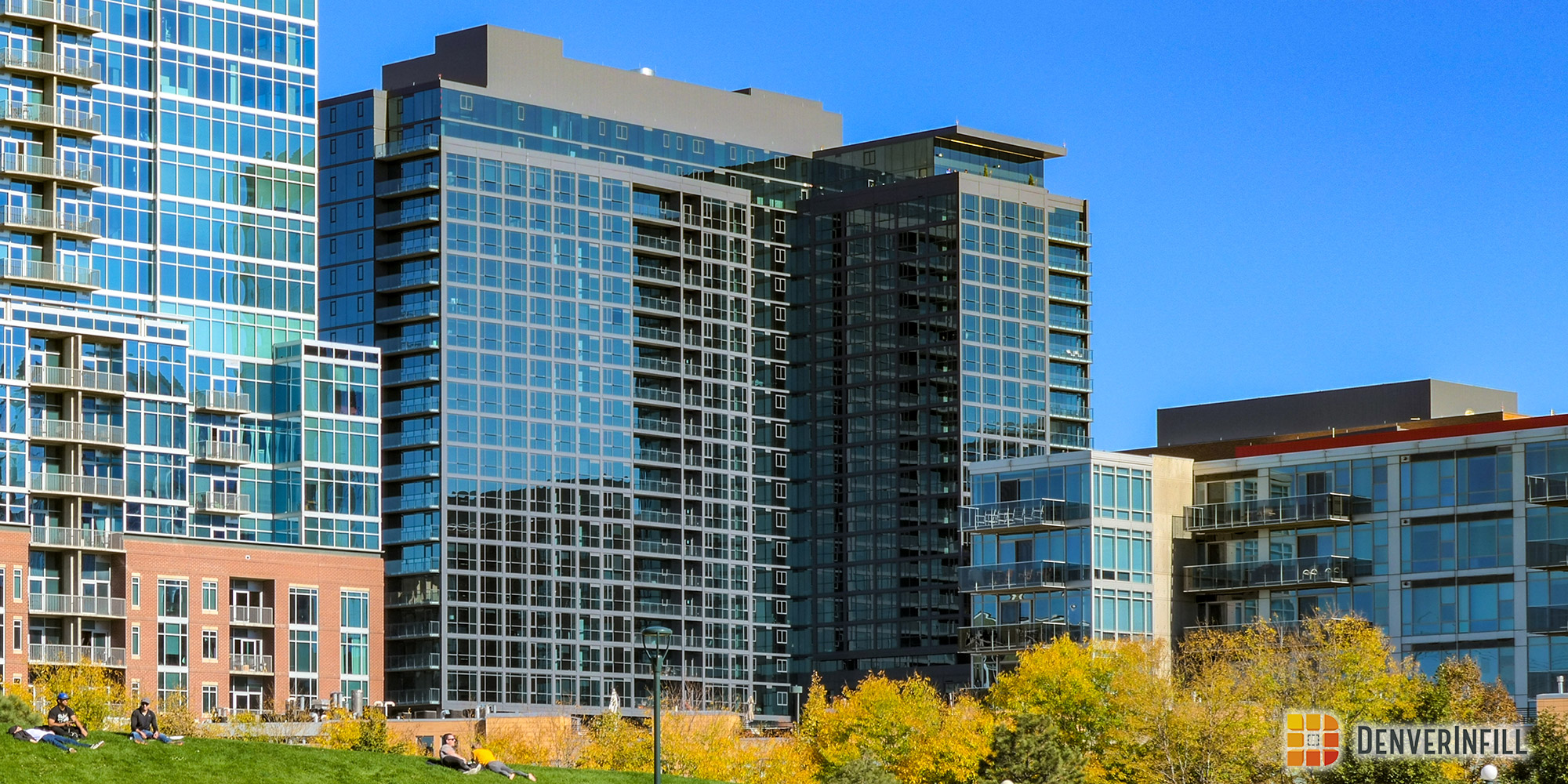 Below: A notable groundbreaking in the past six months was Greystar’s 18th & Market project, which removed a block-long blighted parking lot from Lower Downtown. 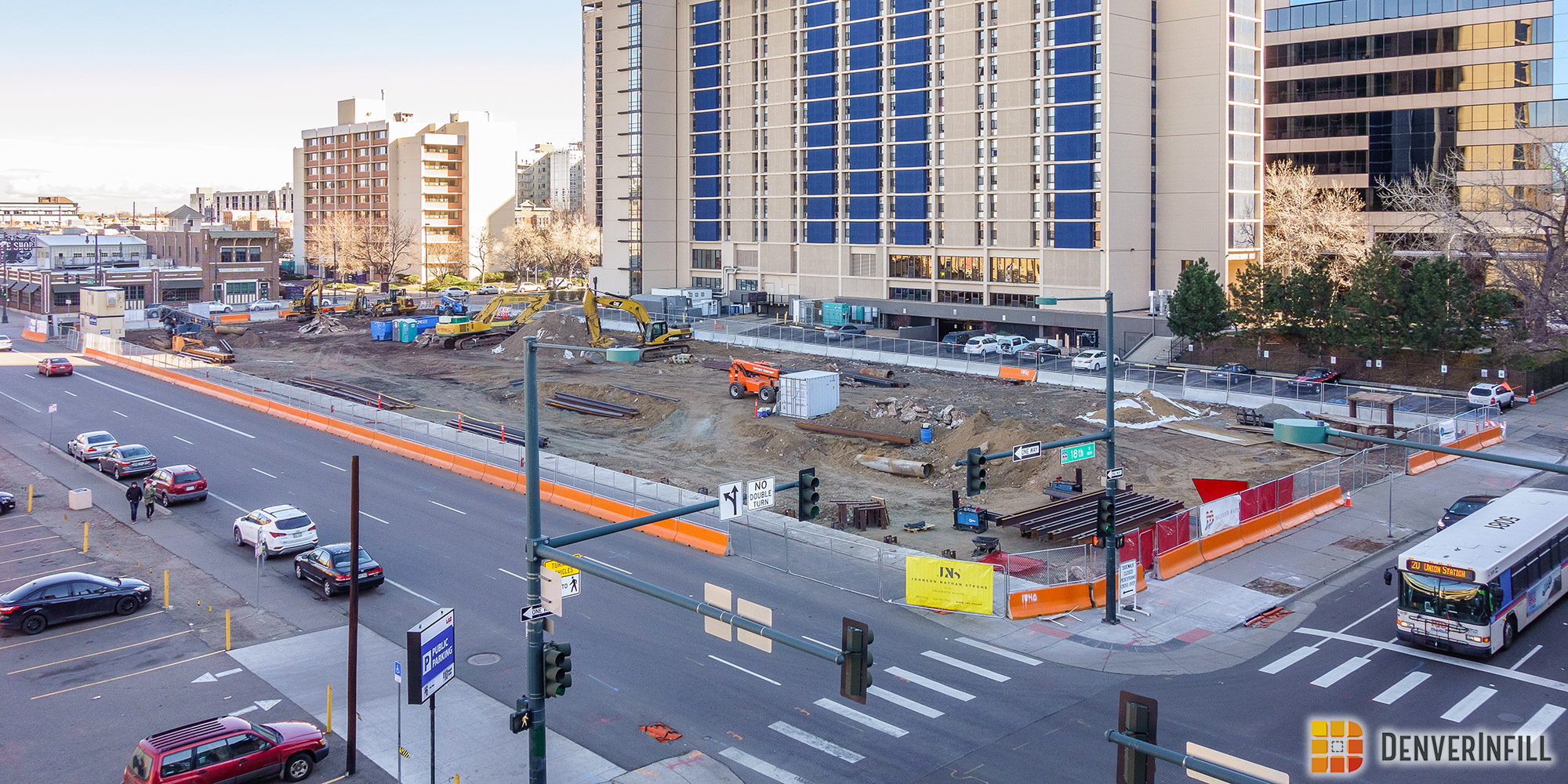 We are now at the point where some projects that are under construction will not finish by December 2019, the end of the decade. Of the 6,202 units currently under construction, we estimate that 4,760 of them will be completed by the end of 2019. Adding that to the 13,936 units already finished, we are projecting that a grand total of 18,696 new homes in 93 multifamily developments will be built in the Downtown area this decade.

To put that in context, Stapleton Denver, the master-planned redevelopment of Denver’s former airport that has been underway since 2001 and is expected to be completed in 2021, will have a grand total of 12,000 residential units of all types at full buildout.

Below: The number of new homes built in Downtown Denver this decade will be 1.5 times the number of homes developed in all of Stapleton Denver from 2001 to 2021. 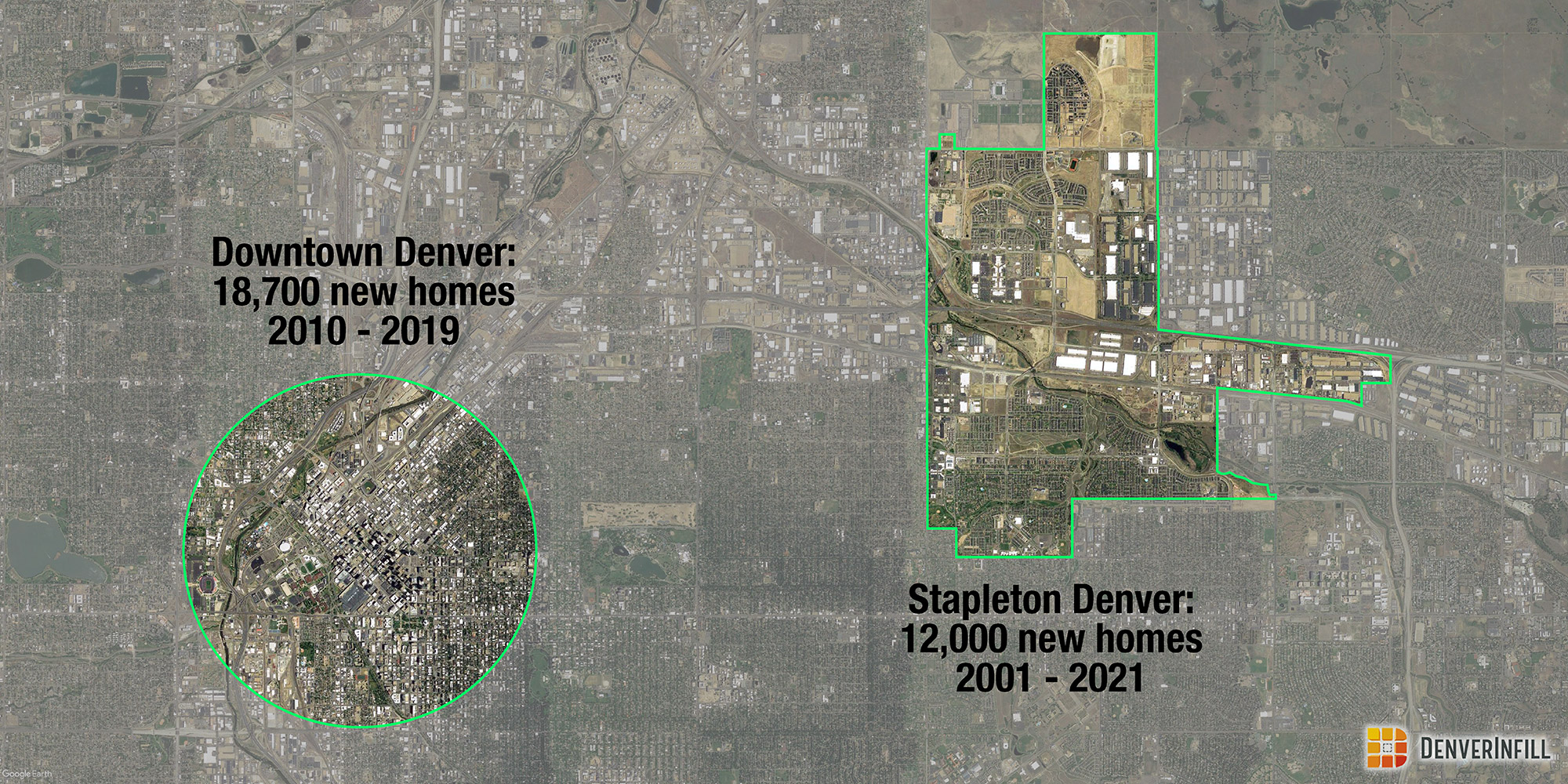 Proposed Projects
In the Proposed category, there were 1,744 units in 7 projects added in the past six months for a total of 3,344 proposed units, up a bit from our June total of 3,210. However, we removed three projects previously listed in the Proposed column that have been cancelled: 1901 Arapahoe, 650 17th Street, and Colfax Marketplace, which had a combined 1,058 units. So actually, there was a good bump in new proposed units this period.

What’s also notable is the number of for-sale condominium projects. After virtually no condos were developed through much of this decade due to the construction defects liability issue, with that barrier largely resolved in 2017, the number of new condo projects is starting to tick up. Not only are there six condo projects currently under construction (the Coloradan, Colorado Rockies Mixed-Use, Edge LoHi, Ivy Residences, Lighthouse Lofts, and Satori)—the most we’ve had underway so far this decade—but four more condo projects (18th & Glenarm, 26th & Alcott, 575 East 20th Avenue, and Park Place Condominiums) are on the Proposed list.

The projects in the Proposed category include only those we have covered on the DenverInfill Blog, which usually means the developer made the project public to some degree and/or information like renderings, number of stories and units, etc. were verified through a reliable source.

Meanwhile, the In the Pipeline category is where we tally projects we are aware of but, due to being early in the development process and/or the lack of details, have not yet been covered on DenverInfill. There are about 25 multifamily residential projects totaling around 4,200 units “in the pipeline” that we are currently tracking.

Below: Half of this sad-looking block is the site of the tallest residential project currently proposed for downtown: the 32- and 38-story 18th & Glenarm Condo towers. 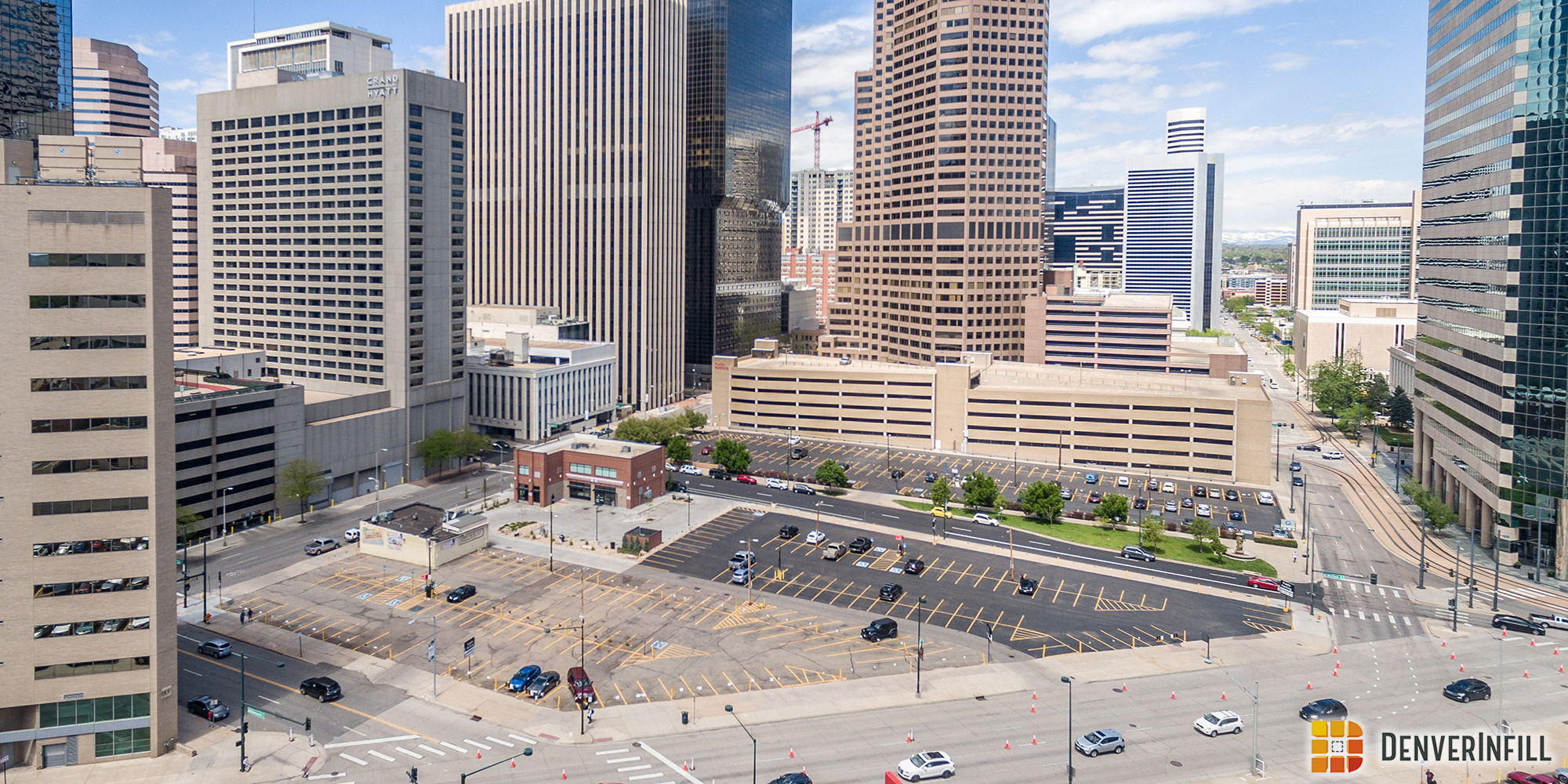 That’s it for our end-of-2018 downtown residential summary. While 100 completed or under-construction residential projects in the downtown area in nine years may seem like a lot (which it is!), that’s only half the story. We have dozens of hotels, office buildings, and other non-residential projects to review in our next post. Stay tuned!