A multifamily residential development providing 642 new homes has been proposed by Tessler Development for the Jefferson Park neighborhood. The project is planned for the full city block bounded by Alcott Street on the east, West 26th Avenue on the south, Bryant Street on the west, and West 27th Avenue on the north. Here’s the site outlined on a Google Earth aerial image:

This is not the first project proposed by Tessler for their Jefferson Park property. On July 21, 2015, Tessler submitted a site development plan to the city for a similar project that would have included 734 for-rent apartments in a 15-story building. In 2016 in preparation for the start of construction, Tessler razed the existing buildings on the property (a residential duplex at the corner of 26th and Bryant and La Loma Restaurant on 26th) and moved some construction equipment onto the site. But then Tessler decided to scrap that particular concept and start over. DenverInfill had not yet reported on this earlier version of the development.

On October 10, 2018, Tessler filed a new project concept plan with the city, followed by a new site development plan on December 3, 2018. Under the new concept, the project would consist of a four-story parking podium containing 593 parking spaces wrapped on all sides by apartments. A tower containing the remaining apartments and all of the condominiums would rise from the podium to reach 15 stories. Two outdoor amenity areas with swimming pools would sit at the base of the tower on top of the podium. The tower will be positioned mostly along the Alcott side of the block to put the densest part of the project away from the lower-scale homes across Bryant Street.

According to a recent article by BusinessDen, about two-thirds of the project’s 642 homes will be for-sale condominiums, with the remaining one-third as rental apartments.

The rendering below is courtesy of OZ Architecture, the project designer. 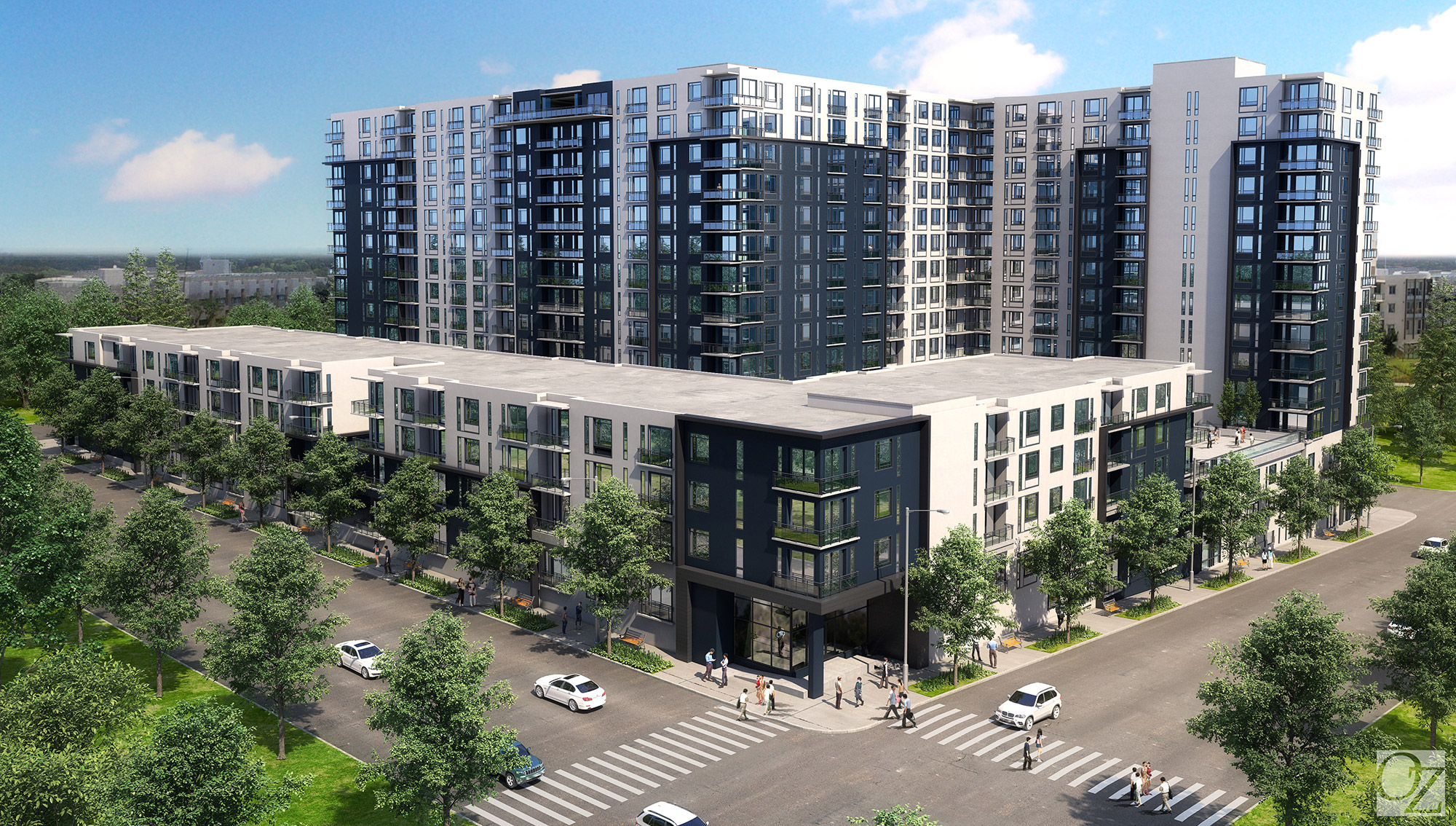 As the Google Earth aerial image above shows, the block features an inverted T-shaped alley system. La Loma and the duplex at the corner occupied only the southern third of the block below the east-west alley. What about the rest of the block? What buildings were previously located on the northern two-thirds of this block?

Using historical aerial imagery available through Google Earth, the US Geological Survey, and the City and County of Denver, I put together this montage of aerial images of the block. How about a little history with your infill? 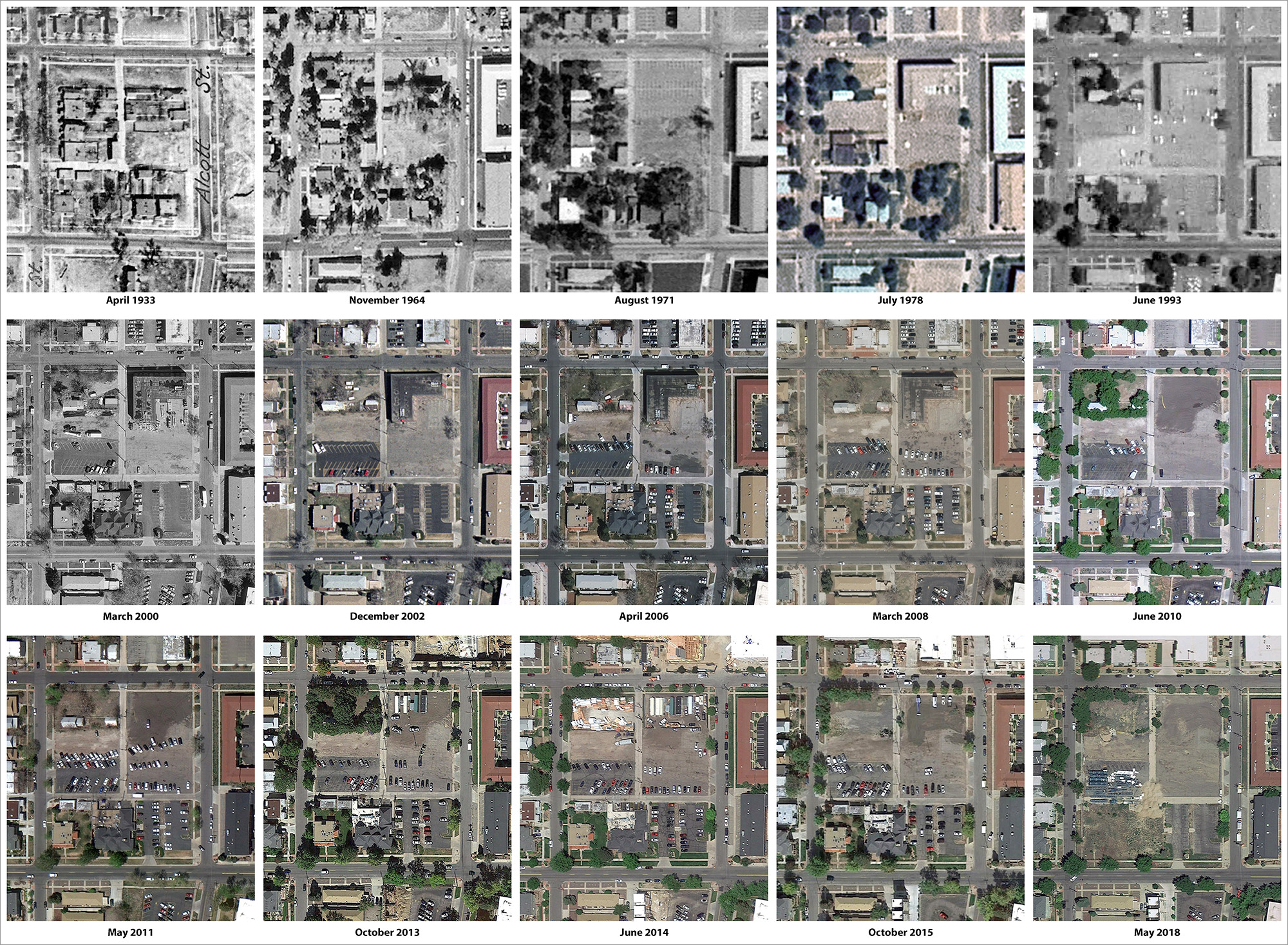 What can we learn about the block’s history from these images?

In the northeastern third of block, two single-family homes facing Alcott Street that were built prior to 1933 were still there in 1964, but were gone by 1971. In their place, a three-story office building with surface parking was built sometime between 1971 and 1978 and was demolished around 2009. Google Street View images from July 2008 show the office building boarded up and covered in graffiti. It appears nothing has ever been built on the lots facing Alcott just north of the east-west alley.

In the northwestern third of the block, one single-family residence and three duplexes were in existence by 1933 and were still there in 1971. By 1978, one of the duplexes and half (?) of another duplex had been demolished. By 1993, only the single-family home was remaining. Google Street View images from 2007 show this lone house was vacant and covered in overgrown vegetation, and by May 2014, it was gone.

In the southern third of the block facing 26th Avenue, by 1933 there was a duplex at the Bryant Street corner, and then to the east there was a vacant lot, three single-family homes, and two more duplexes. This remained the case through 1971, but by 1978 the two duplexes near Alcott had been razed. In 1981, La Loma arrived on the scene. According to La Loma’s “Our Story” webpage, the La Loma building “… was created by combining three Victorian miners’ houses dating from the 1800s, called The Colonial, The Victoria, and The Cantina. Both the La Loma building and the duplex at the corner were razed in 2016.

Here are two photos of the block from this weekend: 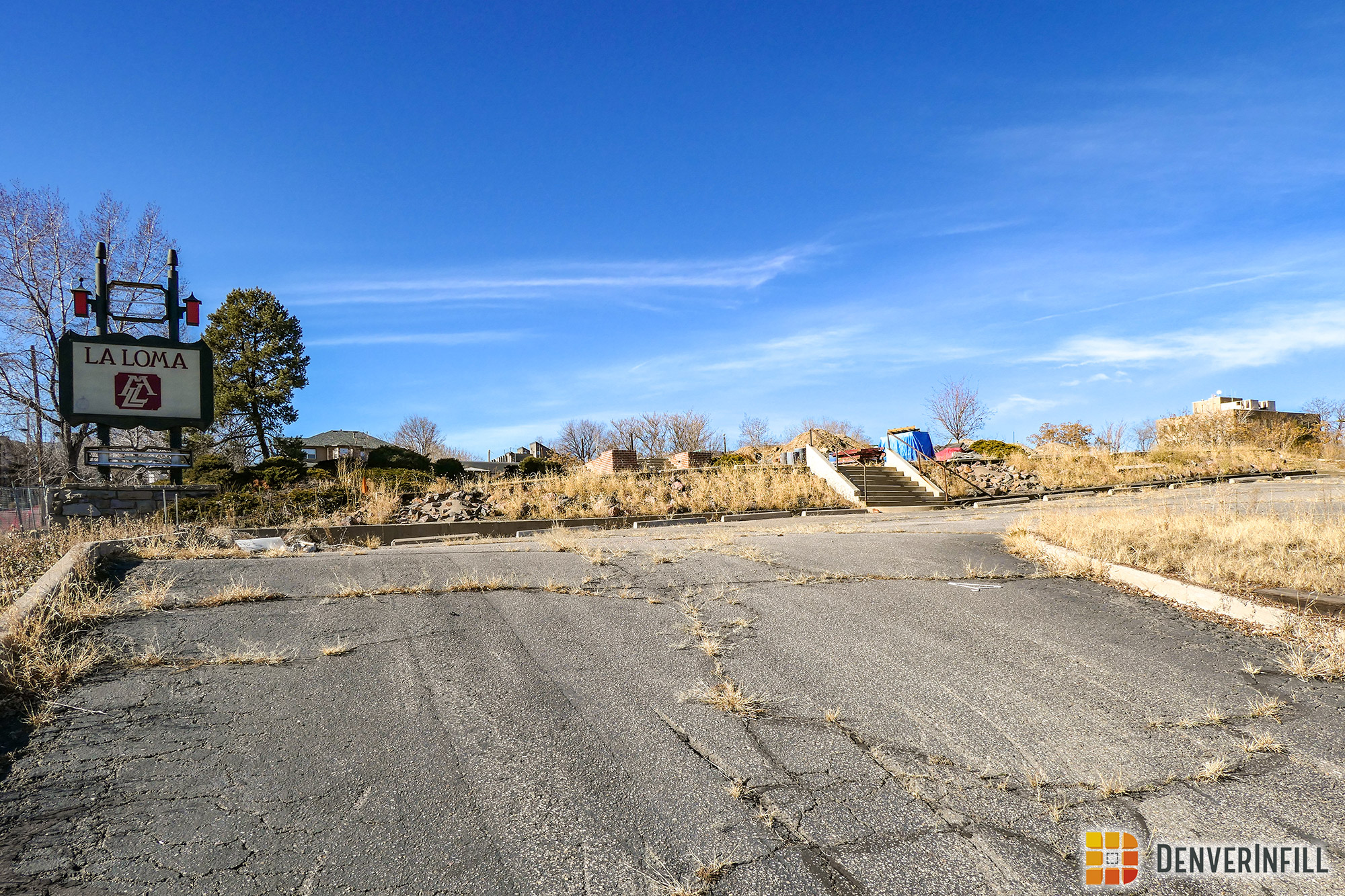 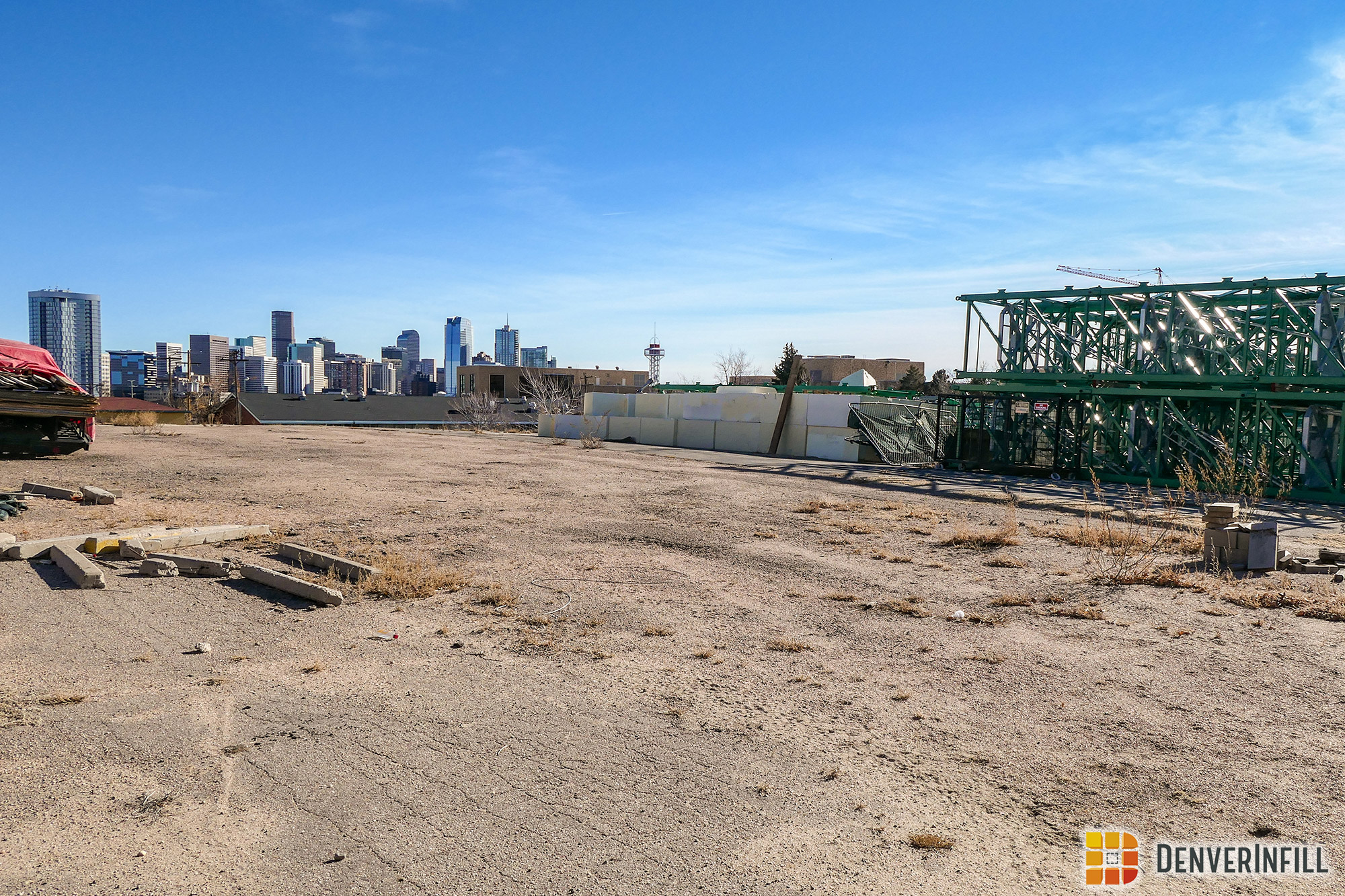 The block sits on a high point, and with the proposed project rising 15 stories, many of the homes will have amazing views of the downtown skyline.

Tessler’s development plans are still under review with the city; a summer 2019 groundbreaking is anticipated.


We have two additional renderings of the project courtesy of OZ Architecture. 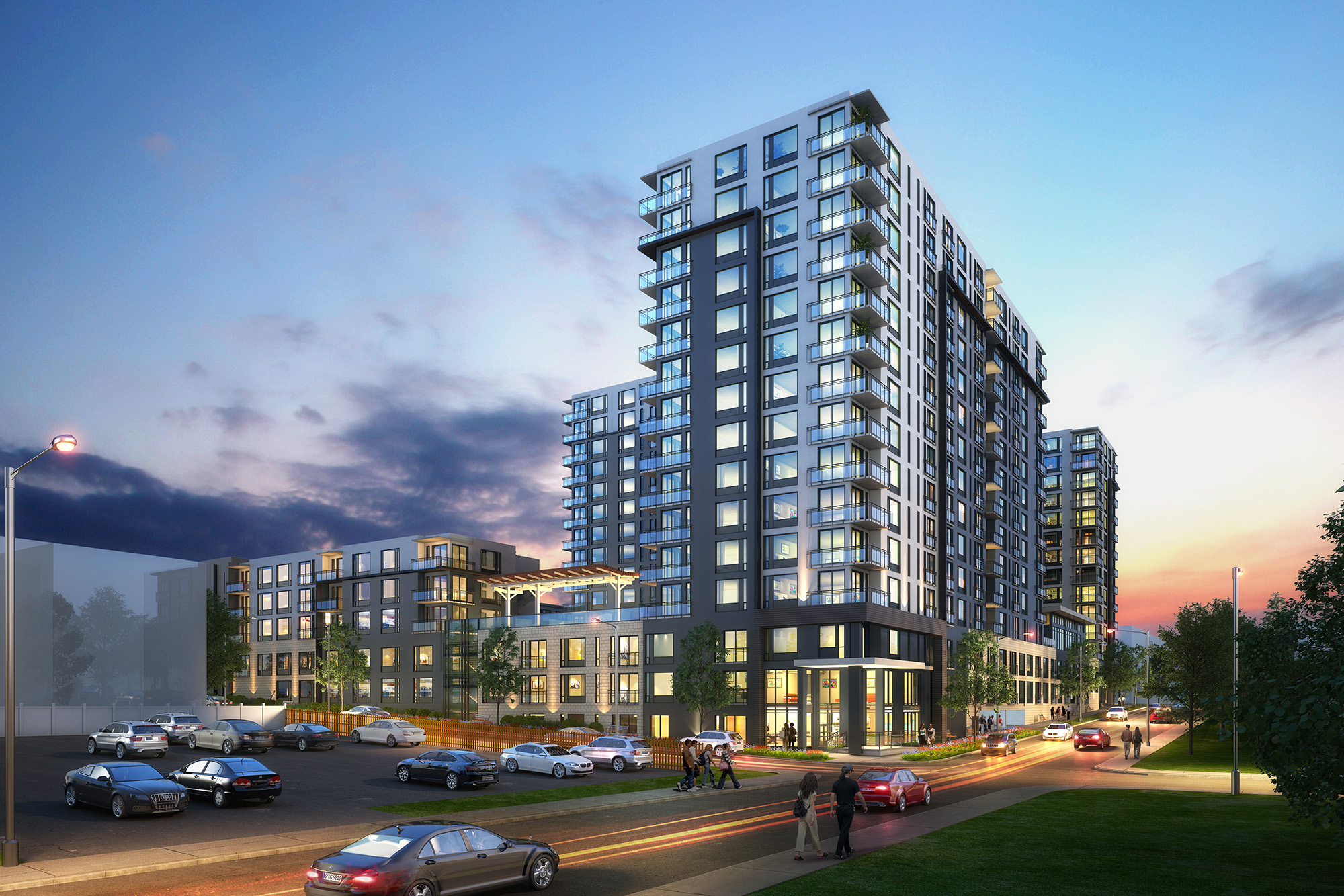 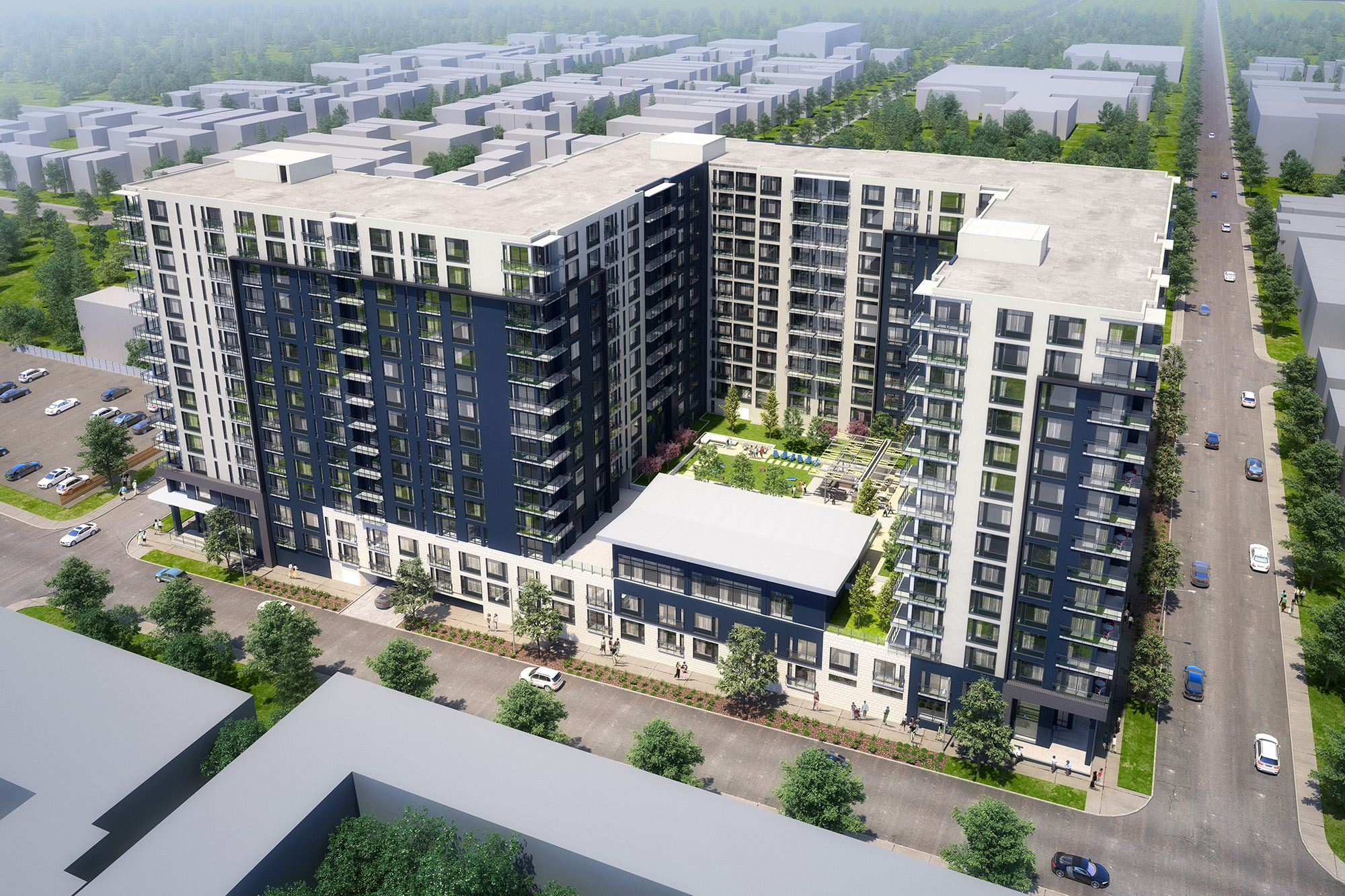