The Auraria Parkway–Westbound Colfax flyover ramp crosses diagonally over the 3.75-acre triangle-shaped parcel (outlined in orange below), creating a smaller section within that is bounded on all three sides by elevated roads; the other two being the West Colfax Avenue viaduct to the south and the Southbound I-25–Colfax off-ramp to the east. Within this unique triangular area, the five-story, 70-foot tall Meow Wolf Denver building (footprint outlined in yellow) will rise 30 feet above the busy motorways. Situated in the far southwestern corner of the Auraria district, Meow Wolf Denver will directly border three other neighborhoods: Jefferson Park to the west, Sun Valley to the southwest, and La Alma/Lincoln Park to the south. 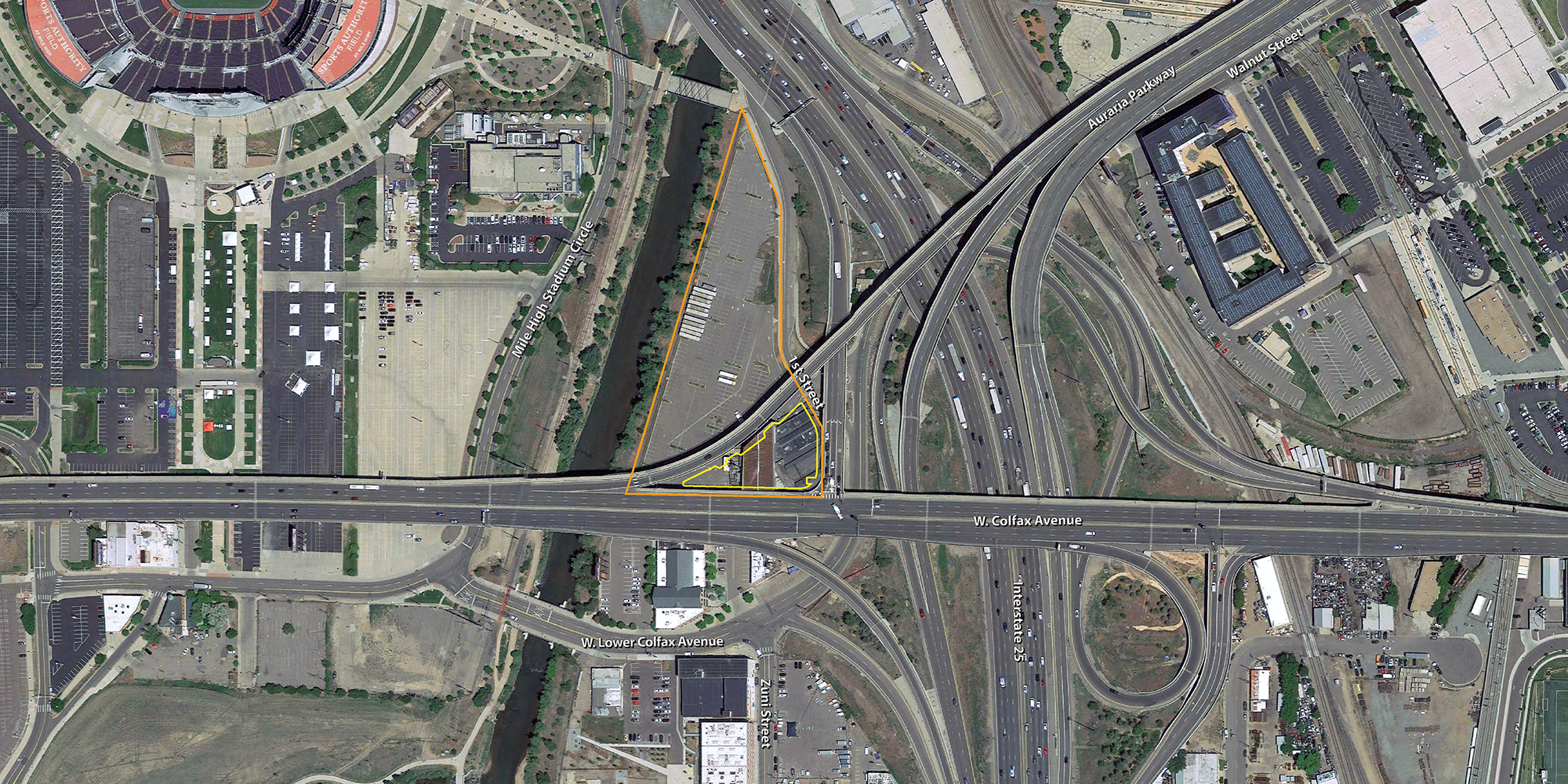 According to the Site Development Plan approved by the city in October, the project will stack up as follows: The ground floor will feature the main lobby and related uses, a gift shop/retail space, and a bar/music venue. The second floor will hold staff offices and a conference space, and floors three through five will contain the interactive art exhibits. Parking will be provided on the existing surface lot to the north, although it will be reconfigured near the new building to provide a landscaped pedestrian entry, vehicle-drop-off zone, and two small outdoor gallery buildings. The main structure will be clad in masonry brick on the lower levels and fiber cement panels on the upper levels.

The rendering below is courtesy of the project architect, Shears Adkins Rockmore. 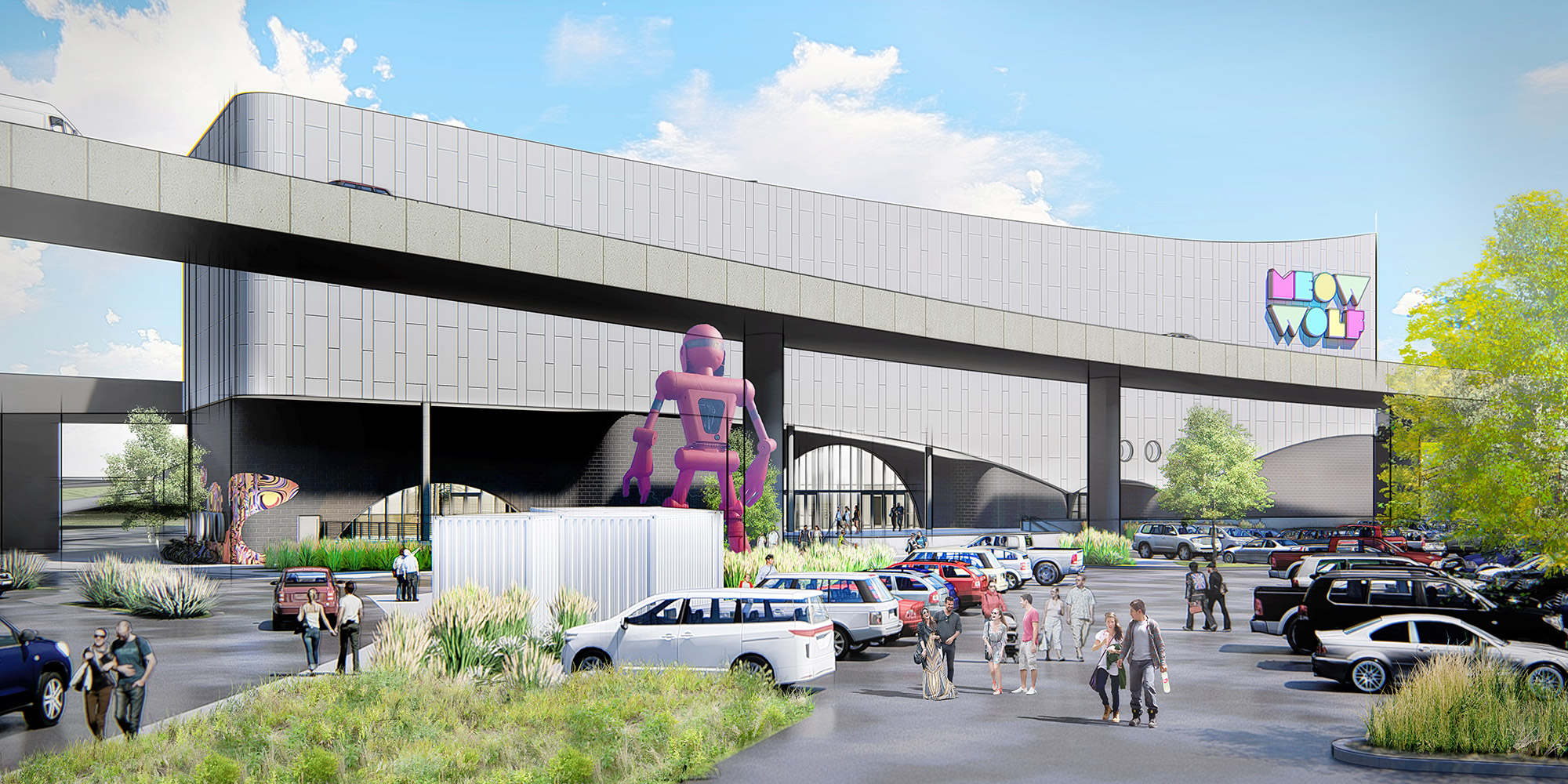 For Denver history and geography buffs, there are several aspects of this project you’ll find interesting.

1st Street
Meow Wolf Denver’s address will be 1338 1st Street. Not 1st Avenue, which spans east-west across the metro area, but 1st Street, as in on the Downtown street grid. Yes, 1st Street does exist. The numbered streets in downtown get smaller as you head southwest, reaching single digits on the Auraria campus. 5th Street is the last major numbered street on the downtown grid, and a short, unsigned stretch of 4th Street exists in front of the Campus Village Apartments. Past the apartments are some railroad tracks and then the spaghetti pile that is the I-25/Colfax/Auraria Parkway interchange.

But just west of the sprawling interchange and below the Colfax viaduct along the eastern bank of the South Platte River is a small, surviving remnant of the downtown street grid where we can find not only 1st Street but also the “00” block of Larimer. It’s not easy to know these streets exist when you’re there on the ground as the city hasn’t identified either with street signs, but from an overhead view, a hint of the 45-degree-rotated downtown street grid is evident in the alignment of buildings and property lines. 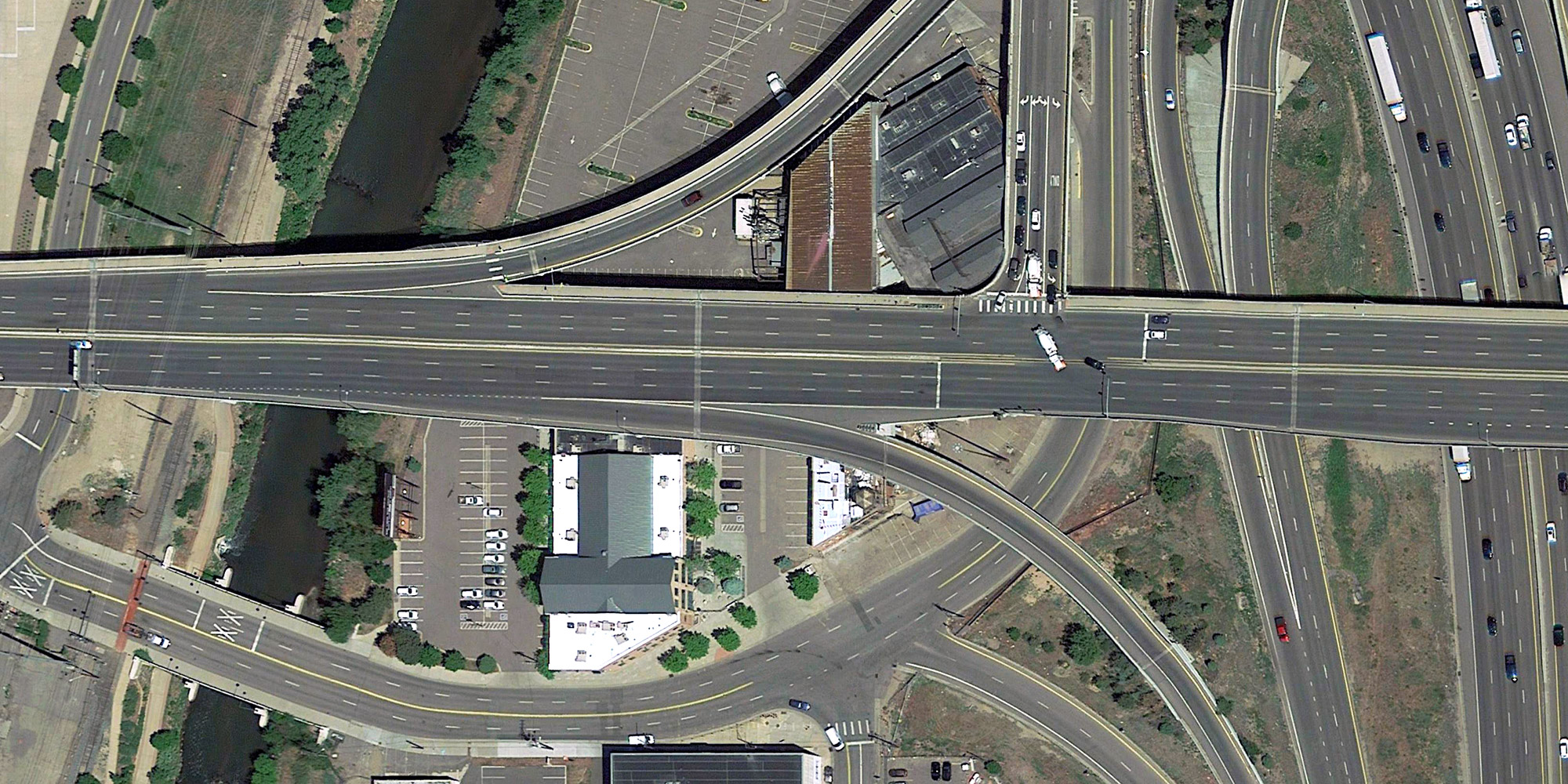 All of the buildings in the center of the photo above were part of the historic Midwest Steel & Ironworks Company. 1st Street can be identified by the buildings at an angle immediately north of the viaduct and west of the highway off-ramp. These were Midwest Steel’s tool and machinery shops that were built in multiple phases between 1911 and 1952. These buildings were recently razed to make way for Meow Wolf Denver.

Let’s take a look at some historic and contemporary photos of what was located at 1338 1st Street until just recently.

Courtesy of the Denver Public Library, here’s a photo from the early 1920s. Colfax was already an elevated structure by then, but Interstate 25 would be several decades off in the future. 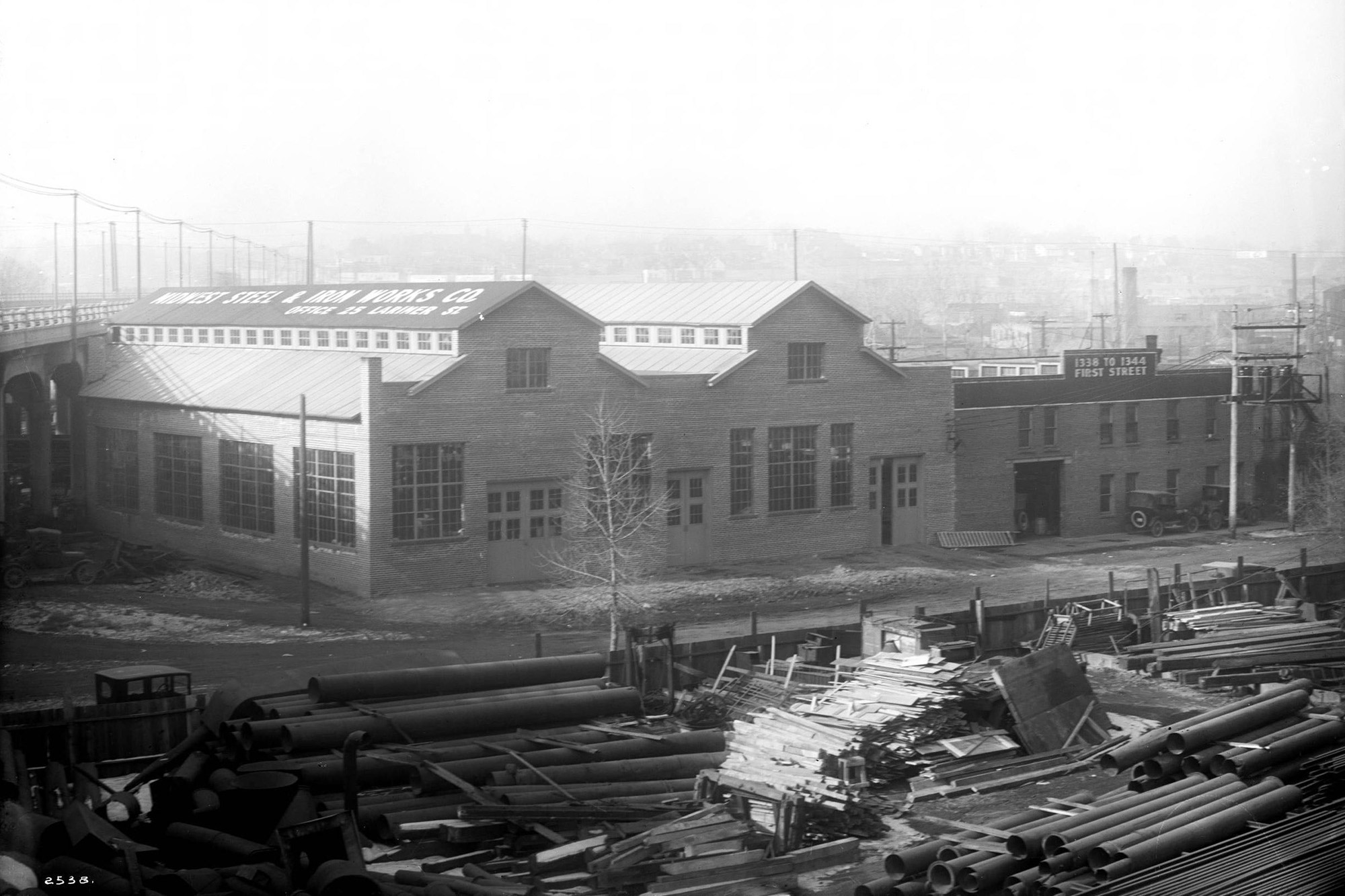 Next, I’ve paired two photos from the 1980s (both courtesy Denver Public Library) with 2017 Google streetview images from about the same perspective. Note the absence of the elevated off-ramp in the 1980s photos. 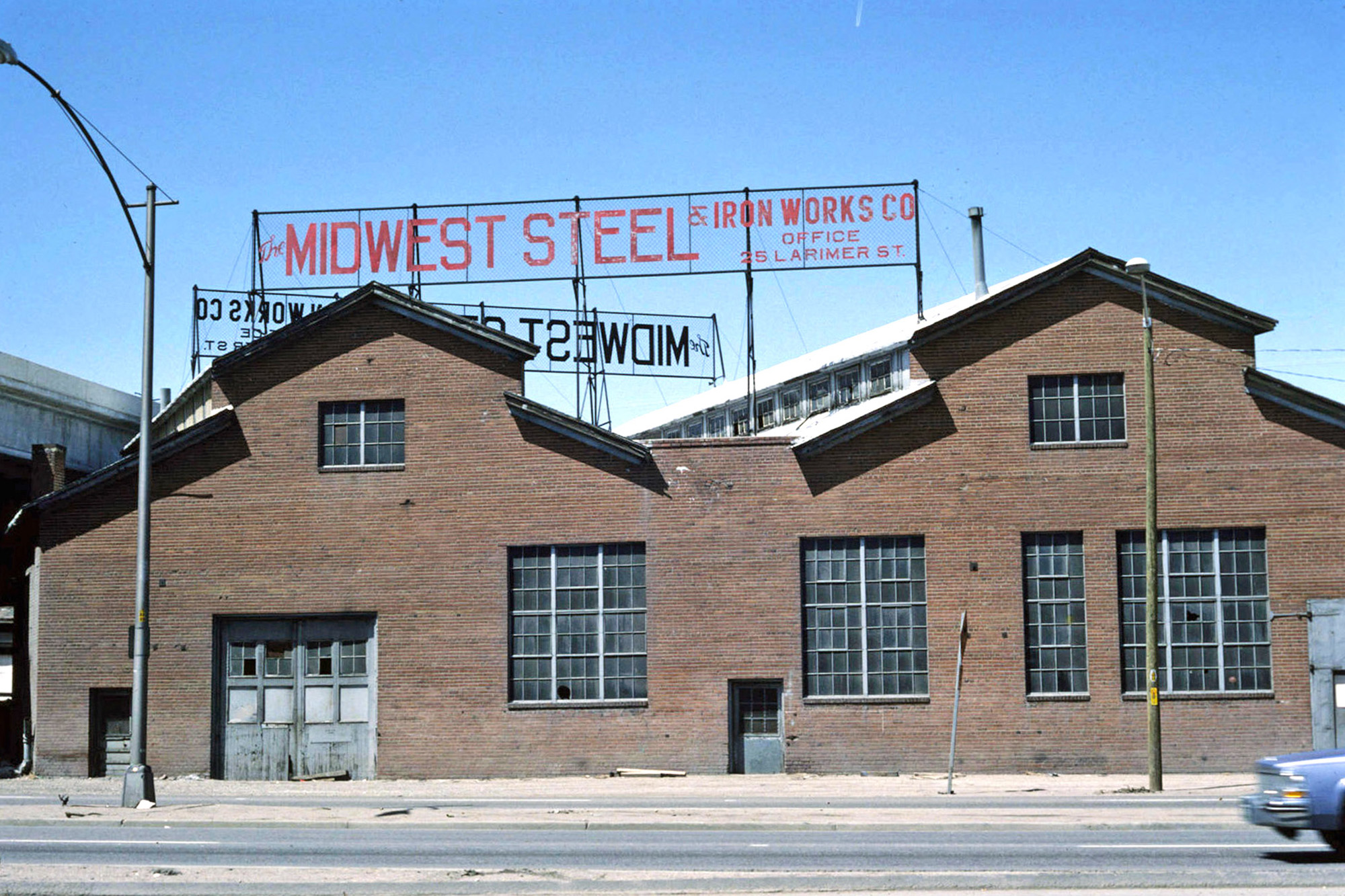 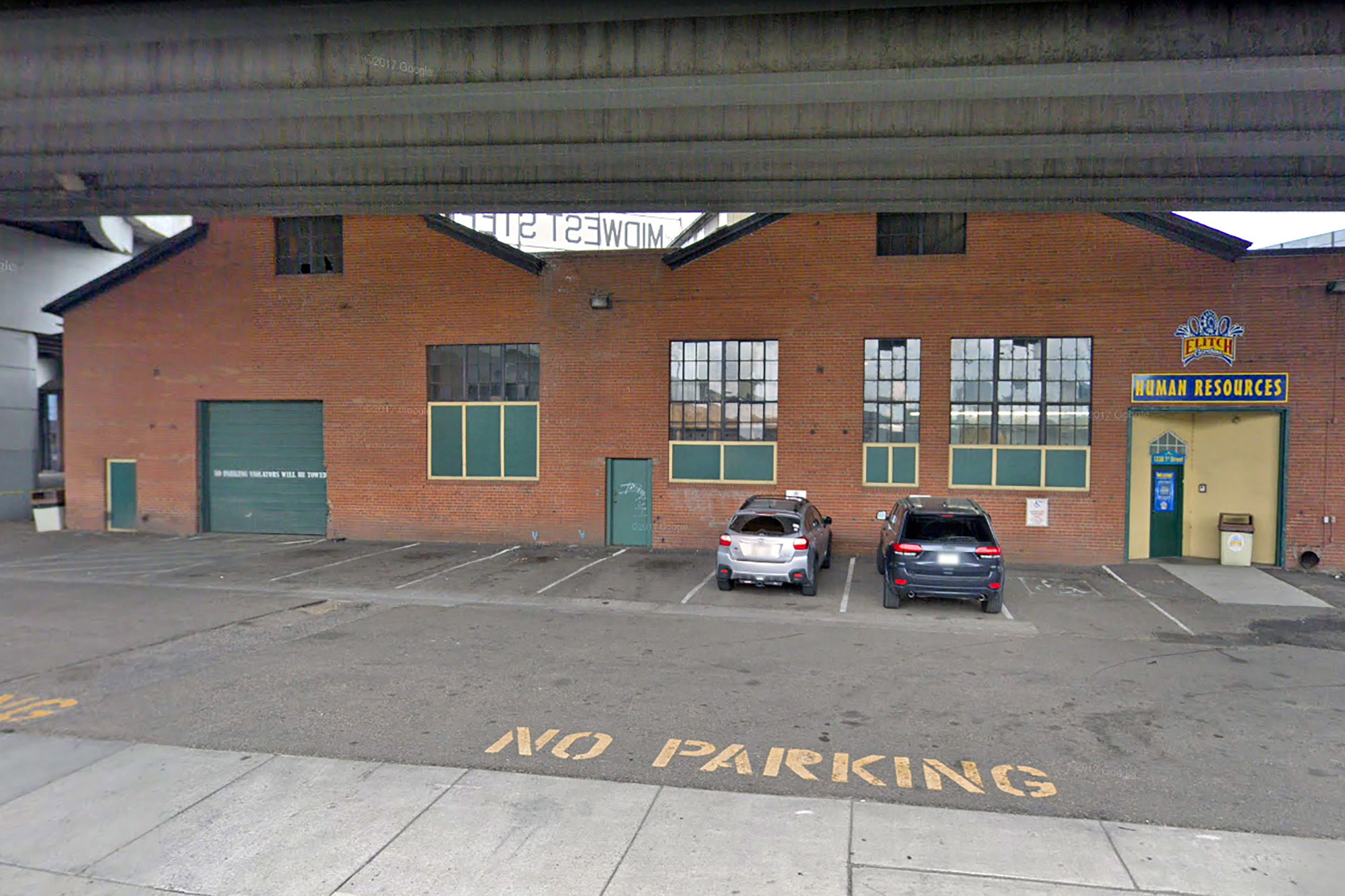 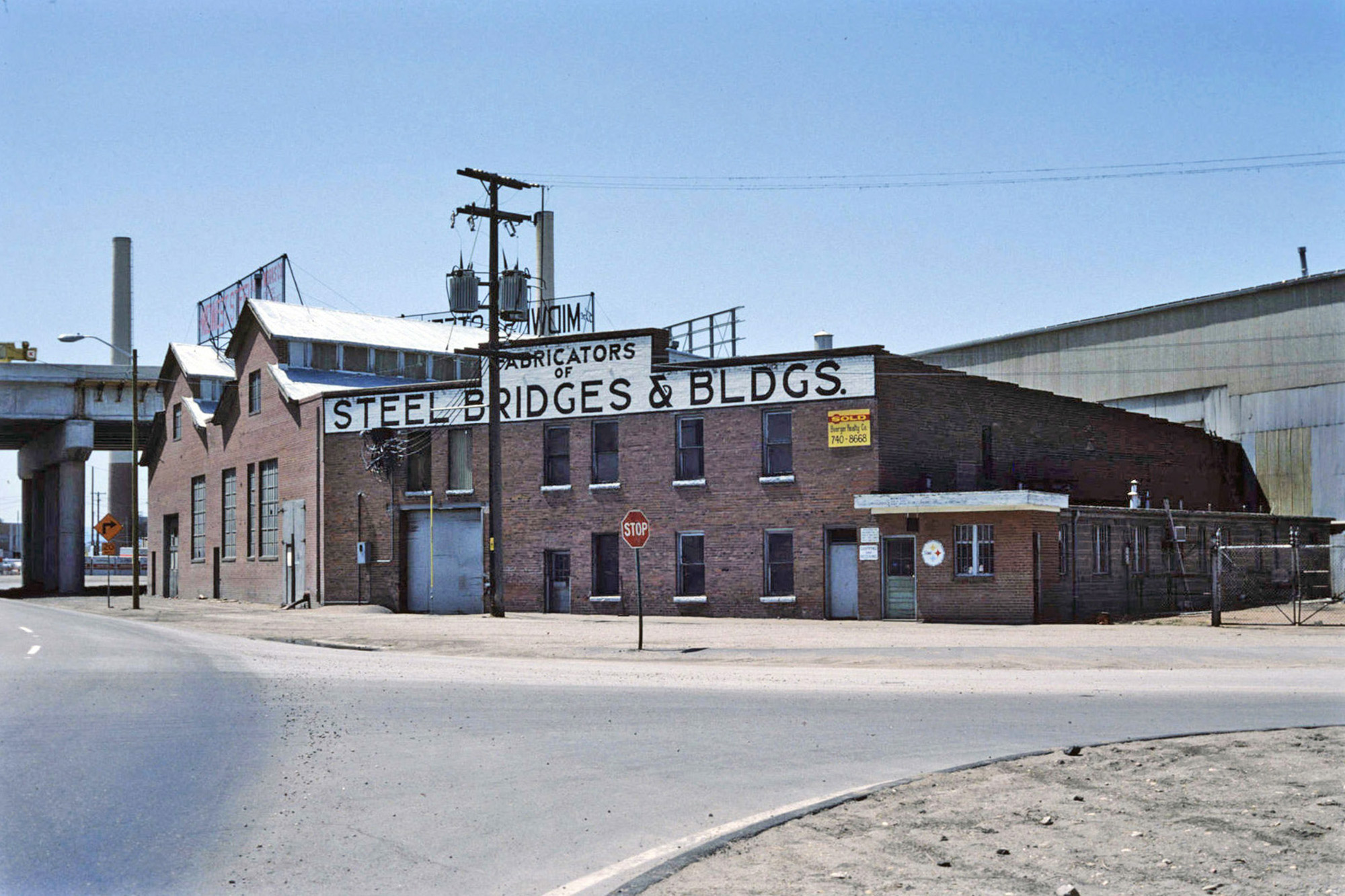 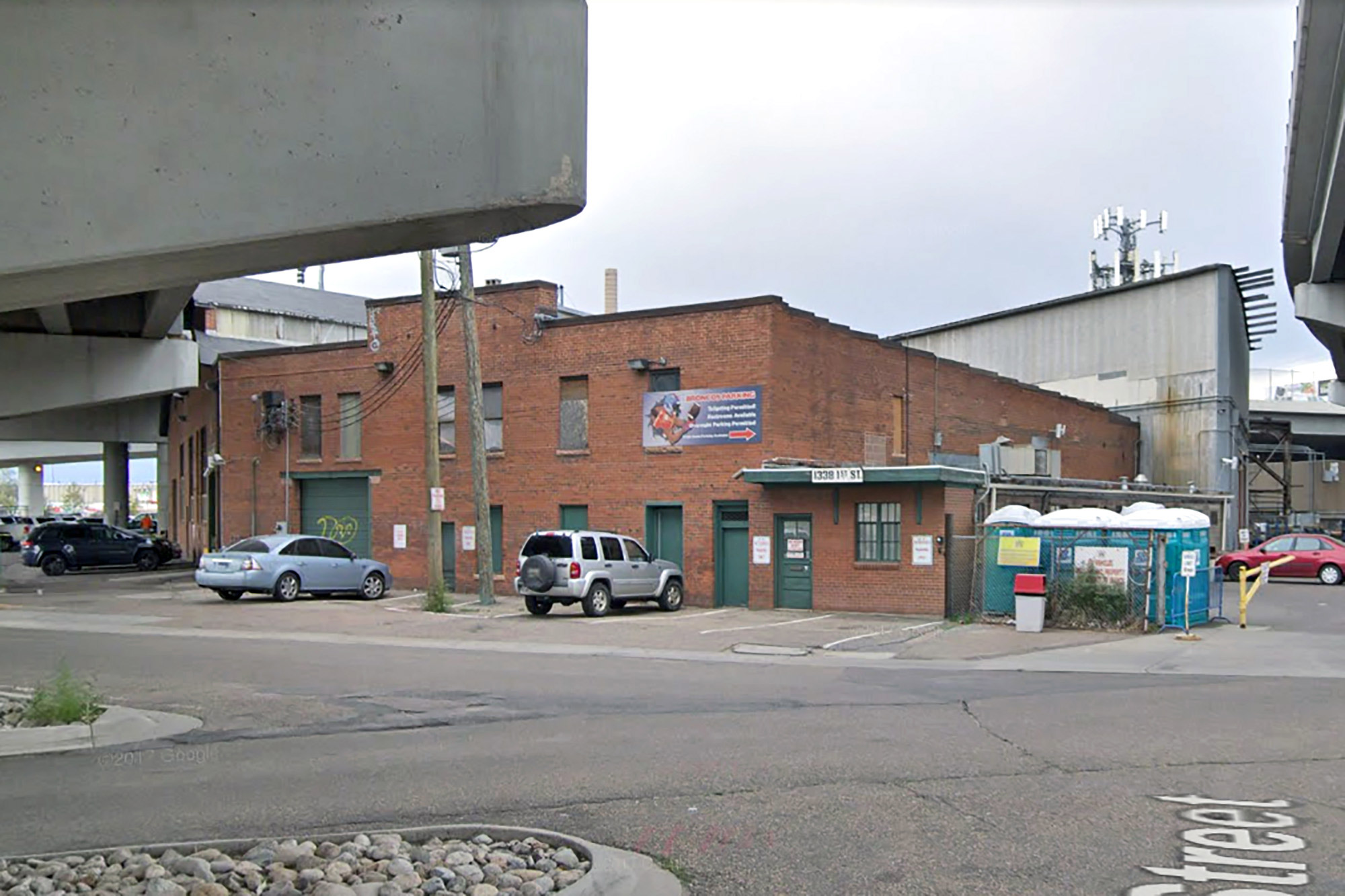 The Midwest Steel & Ironworks buildings south of Colfax help us spot the end of one of Denver’s most well-known streets: Larimer.

The “00” Block of Larimer
The building in the aerial photo with the T-shaped green-colored roof, today the Mile High Station venue, dates to the late 1890s as Midwest Steel’s main factory building. To its east was the company’s office building, constructed in two phases (1906 and 1931) and featuring a hexagonal brick turret. After sitting vacant for many years, this distinctive structure was just recently restored and today is Ironworks, a sister venue to Mile High Station.

These two buildings and the parking lot in between face the “00” block of Larimer, though you won’t find a street sign indicating this. The address for the newly restored Ironworks building is 25 Larimer, and the spot where Larimer comes to an end at the Mile High Station building (running into Lower Colfax at an angle) is the “zero point” for addressing on downtown named streets.

Below are two photos of the nicely renovated Ironworks building at 25 Larimer. 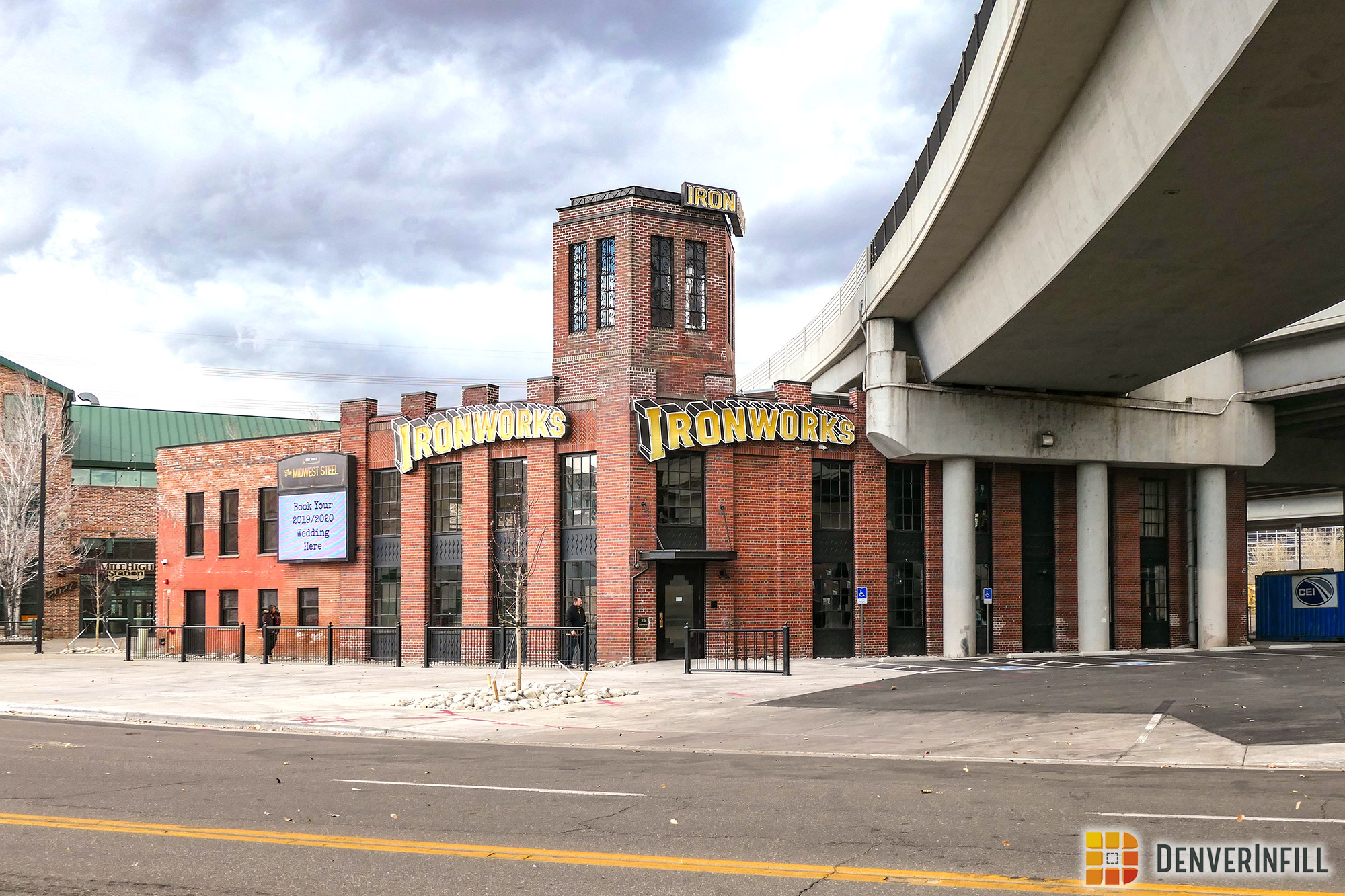 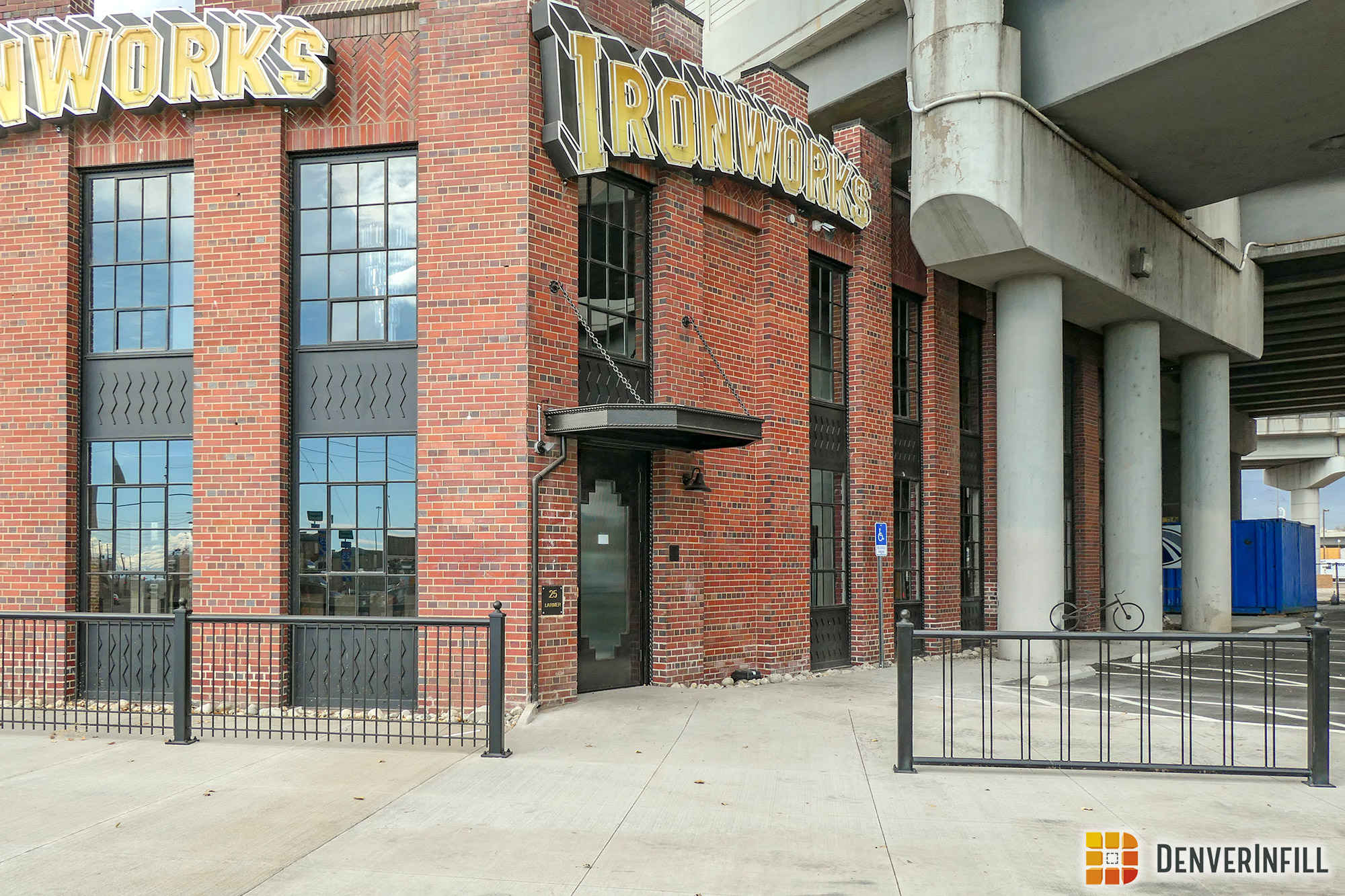 The other interesting geographic tidbit about the Meow Wolf Denver site that we can see in the aerial photo is Denver’s historic Congressional Grant boundary.

The Congressional Grant of 1864
Denver was founded in 1858. Both the Auraria Town Company (west of Cherry Creek) and the Denver City Town Company (east of Cherry Creek) platted out their respective streets and blocks and sold lots to prospective home owners and business owners looking to settle and build in the fledgling community. One big problem: neither town company had title to the land they were selling. The solution was the Congressional Grant of 1864, which conveyed to Denver (and those who had acquired lots in the city) clear title to the land within a 960-acre (1 mile by 1.5 mile) rectangle of land encompassing most of the original Auraria and Denver City town plats. Jerome Smiley, author of the definitive History of Denver (1901), put it this way:

It is to be remembered while we are considering the affairs of these Town Companies that none of them had any valid title to the soil on which their operations were carried forward. All of them were merely squatters on land to which the Indians had the first claim under the conditions then existing. Later, in giving lots to all who would build on them, or in donating lots to first-born children, or to this or that especially worthy citizen; or in keeping a liberal share for themselves, these excellent and enterprising men were dealing with things which they did not, legally, own; nor was it any better if they sold a lot for cash. As this was Indian land not open to entry, no title could be acquired to it through the ordinary operation of the land laws of the United States. This was the legal aspect of the situation; and in theory, at least; it remained so until, in 1861, a treaty was made at Bent’s Fort pursuant to a resolution of the United States Senate, with the Cheyenne and Arapahoe Indians, under which they ceded all their lands “in the Pike’s Peak region” to the United States. This was done as part of the proceedings in organizing a new Territory here, but it did not give title to these town companies. Prior to that extinguishment of Indian title and, as a matter of fact, for some time afterward, possession and improvement of the town lots carried title of right that was maintained with guns upon occasion; though it was not until Congress enacted the law of May 28, 1864, “for the relief of the citizens of Denver,” and making what is known in real estate annals as “the Congressional grant,” that these defective titles growing out of the irregular proceedings of the founders of Denver, were confirmed and made good. 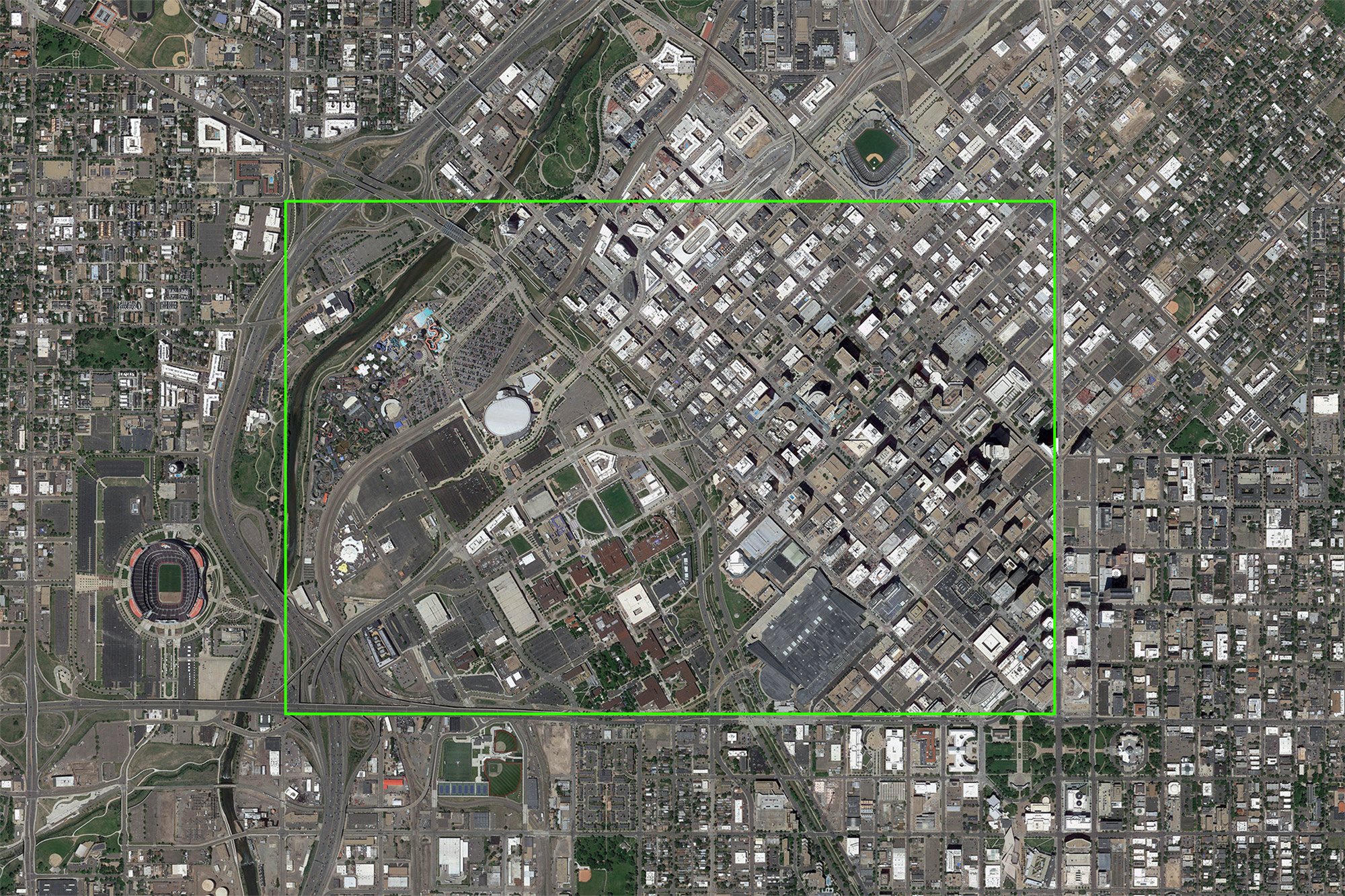 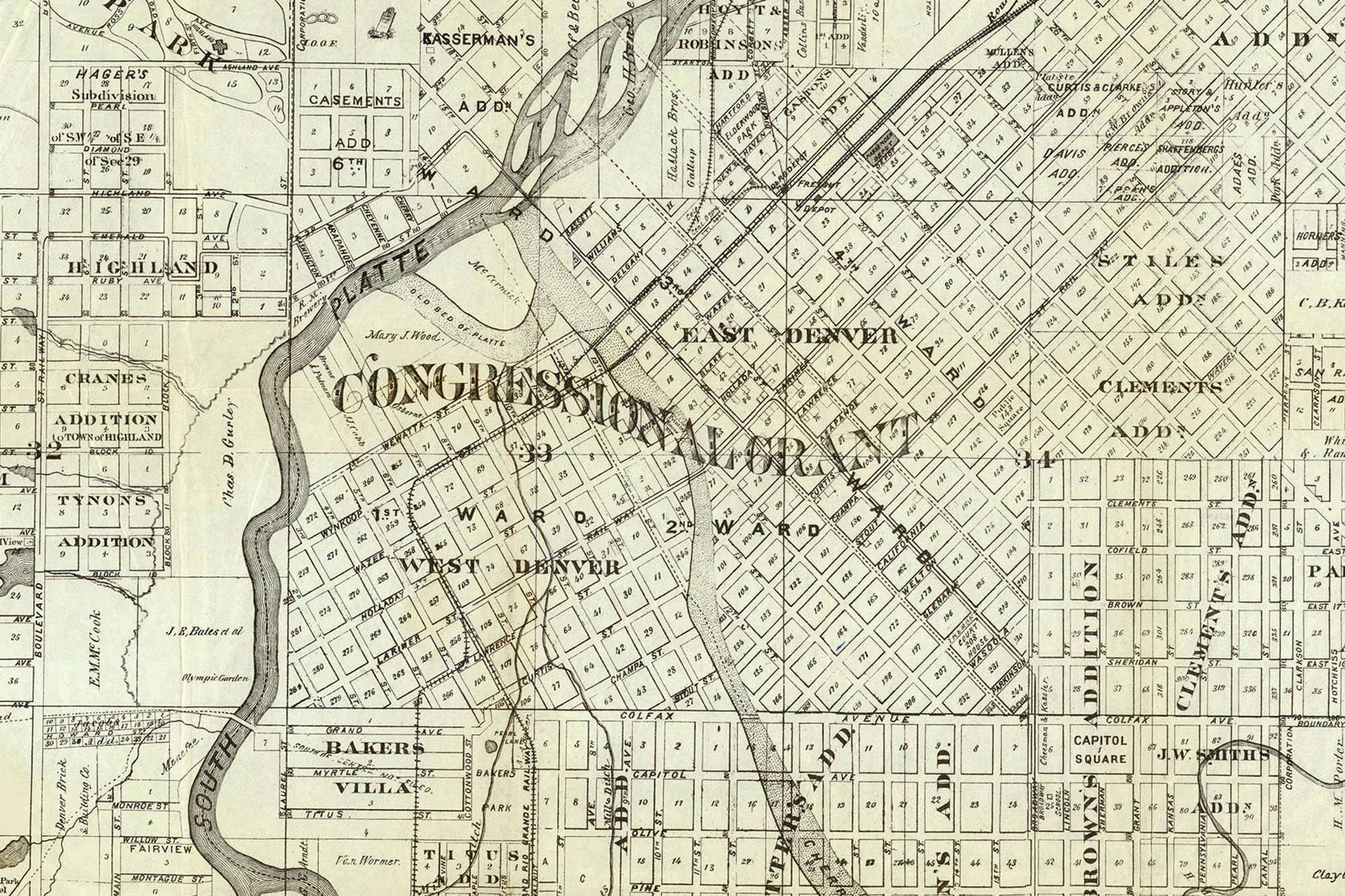 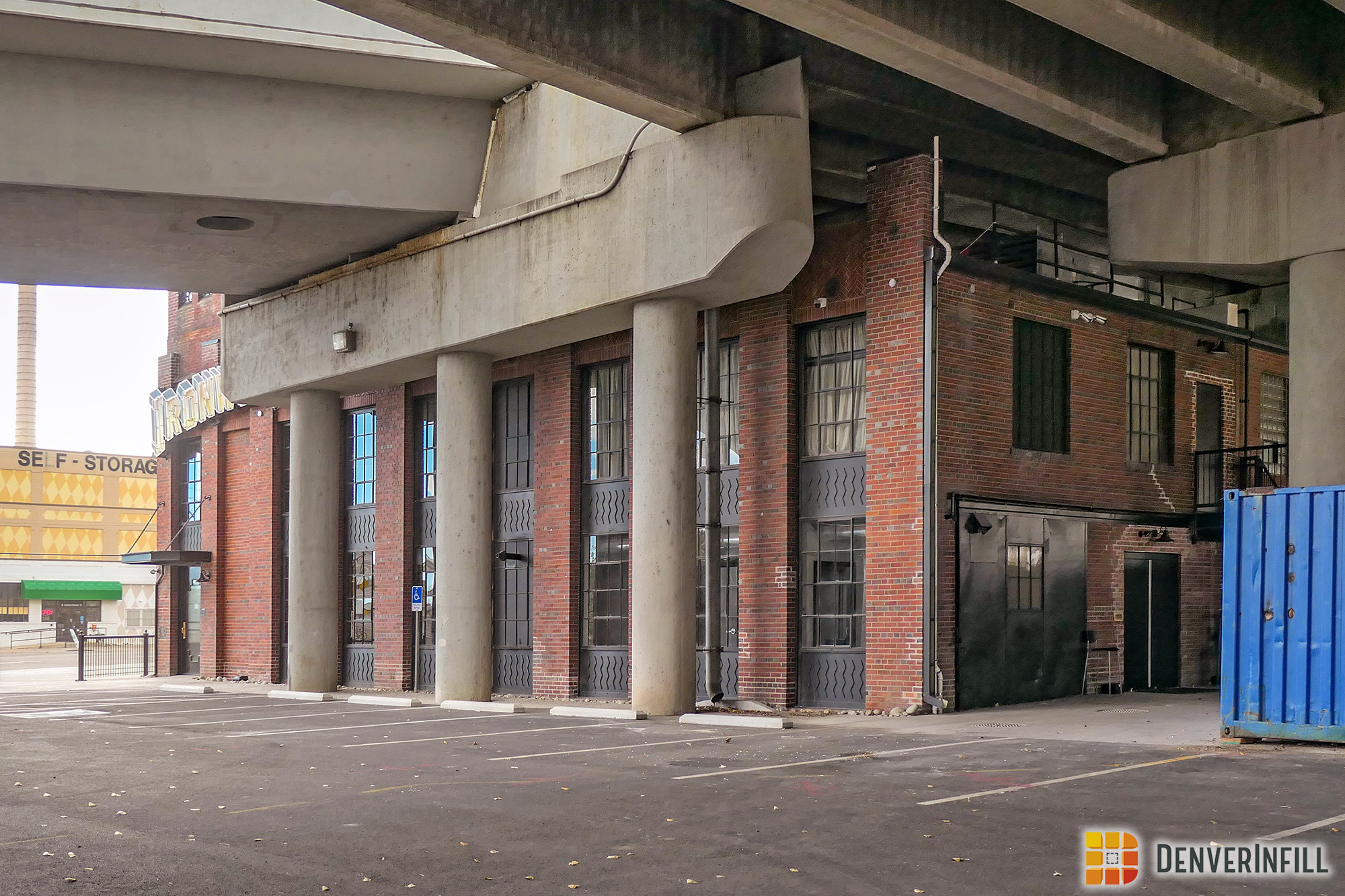 Looking at the now-demolished machine shops along 1st Street in the aerial photo, we can clearly see that the buildings angled to face 1st Street are inside the Grant area, and the building with the rusty roof immediately to the west is on the other side of the Congressional Grant boundary.

In their place, the new Meow Wolf Denver will be split down the middle by the Congressional Grant boundary, running through the entry lobby and the bar. Maybe they should put up a plaque or something.

Anyway, to summarize all of the neat historical things we’ve discovered about the Meow Wolf Denver site, check out the animated graphic below, which includes a 1890 Sanborn Fire Insurance Map (courtesy University of Colorado Boulder Library) superimposed on top of a current aerial photo to show where 1st Street, Larimer Street, and the rest of the downtown street grid once covered this area.

Let’s wrap up this post with some recent site photos of the now-cleared site where Meow Wolf Denver will go, beginning with the view looking east toward downtown and pivoting counterclockwise to end looking south at the historic Midwest Steel & Ironworks buildings on the other side of the Colfax viaduct. 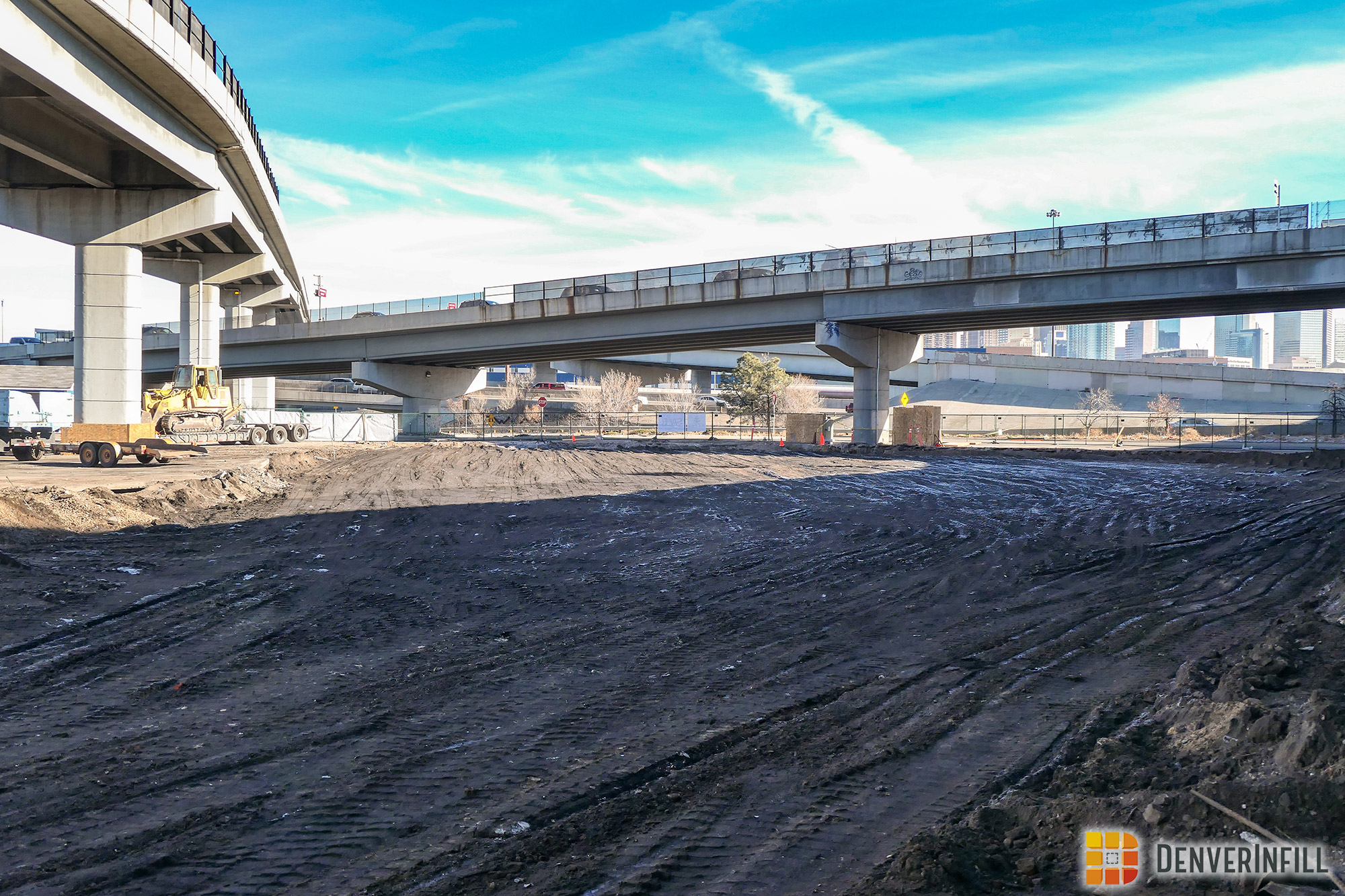 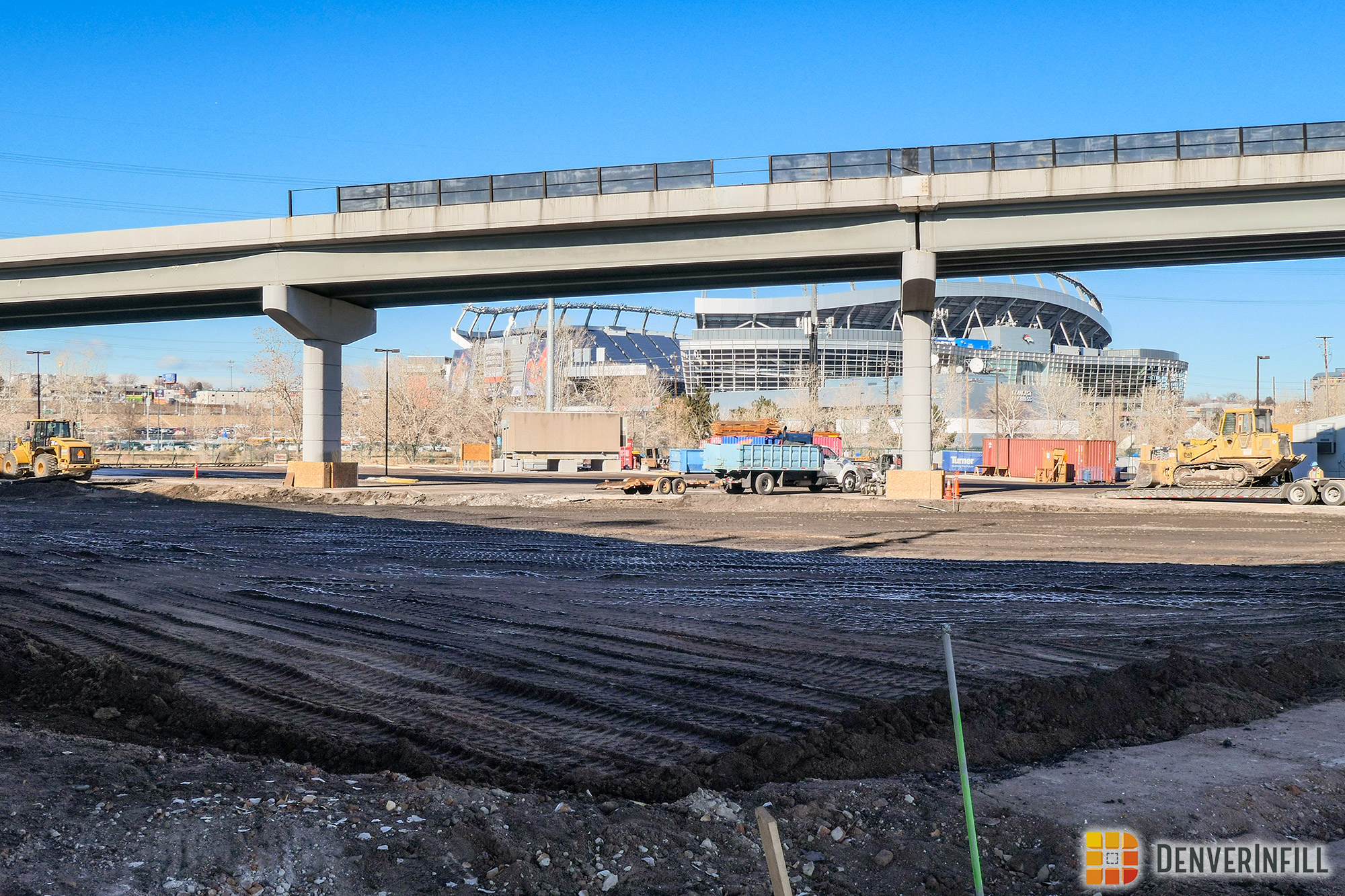 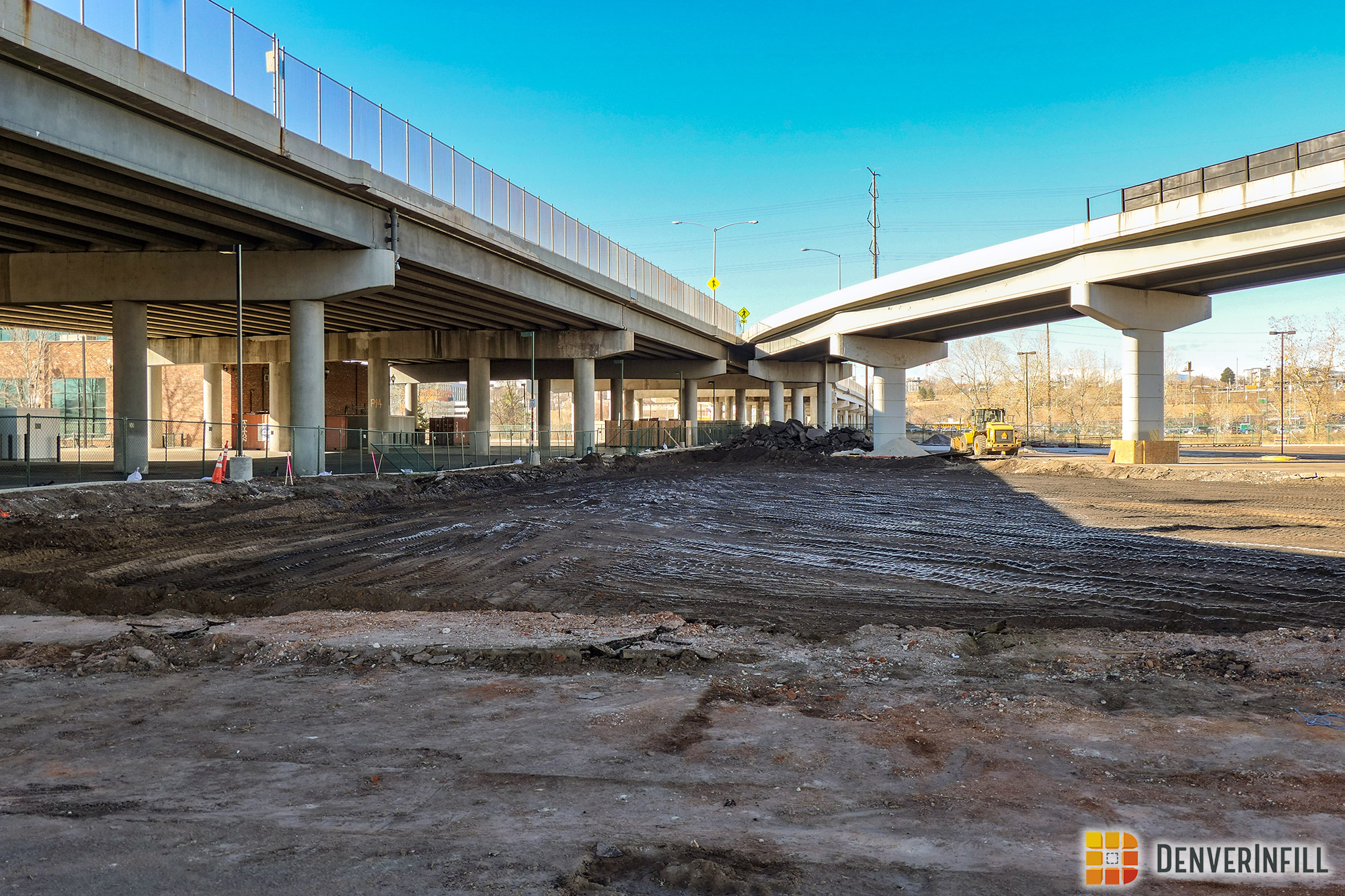 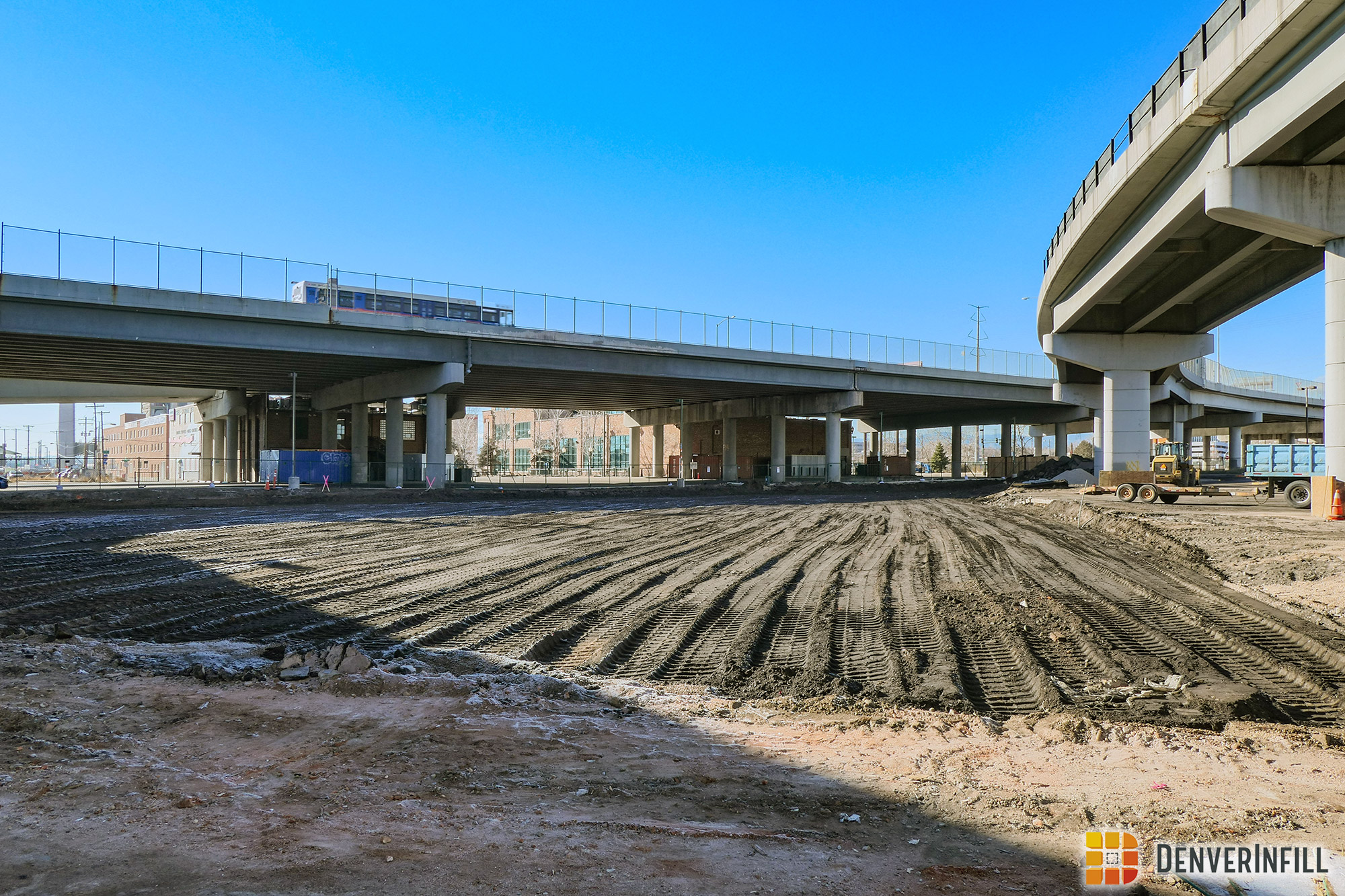 Meow Wolf Denver is scheduled to open in 2020.