Downtown Denver entered the decade as the state’s largest employment center and that’s even more true today, with the number of downtown workers growing significantly in the 2010s from about 110,000 to 140,000, thanks to an expanding start-up/tech sector that has anchored itself in the downtown area and the strong trend of companies moving to downtown. Similarly, Downtown Denver had the largest concentration of hotels in the region in 2010 and that preeminence is even greater today. With downtown’s strong employment growth, ongoing success of the Colorado Convention Center, and the emergence of Denver as a national and international urban tourism destination, the downtown hotel market exploded in the last 10 years. And Downtown Denver’s role as the area’s primary governmental and institutional hub remained unchallenged as several major civic, cultural, and educational facilities were constructed in downtown this past decade.

Like our residential analysis, the survey area for our non-residential analysis consists of a 1.50-mile radius of the historic D&F Tower at 16th and Arapahoe, which captures the core downtown area plus the edges of the downtown-adjacent districts. Click here to see all of our past Development Summaries.

Below is our Downtown Denver Non-Residential Summary exhibit for December 2019, giving us a ten-year perspective on office, hotel, and civic/other development within our downtown survey area. You can view/download a high-resolution PDF version (about 5 MB) of the exhibit here. 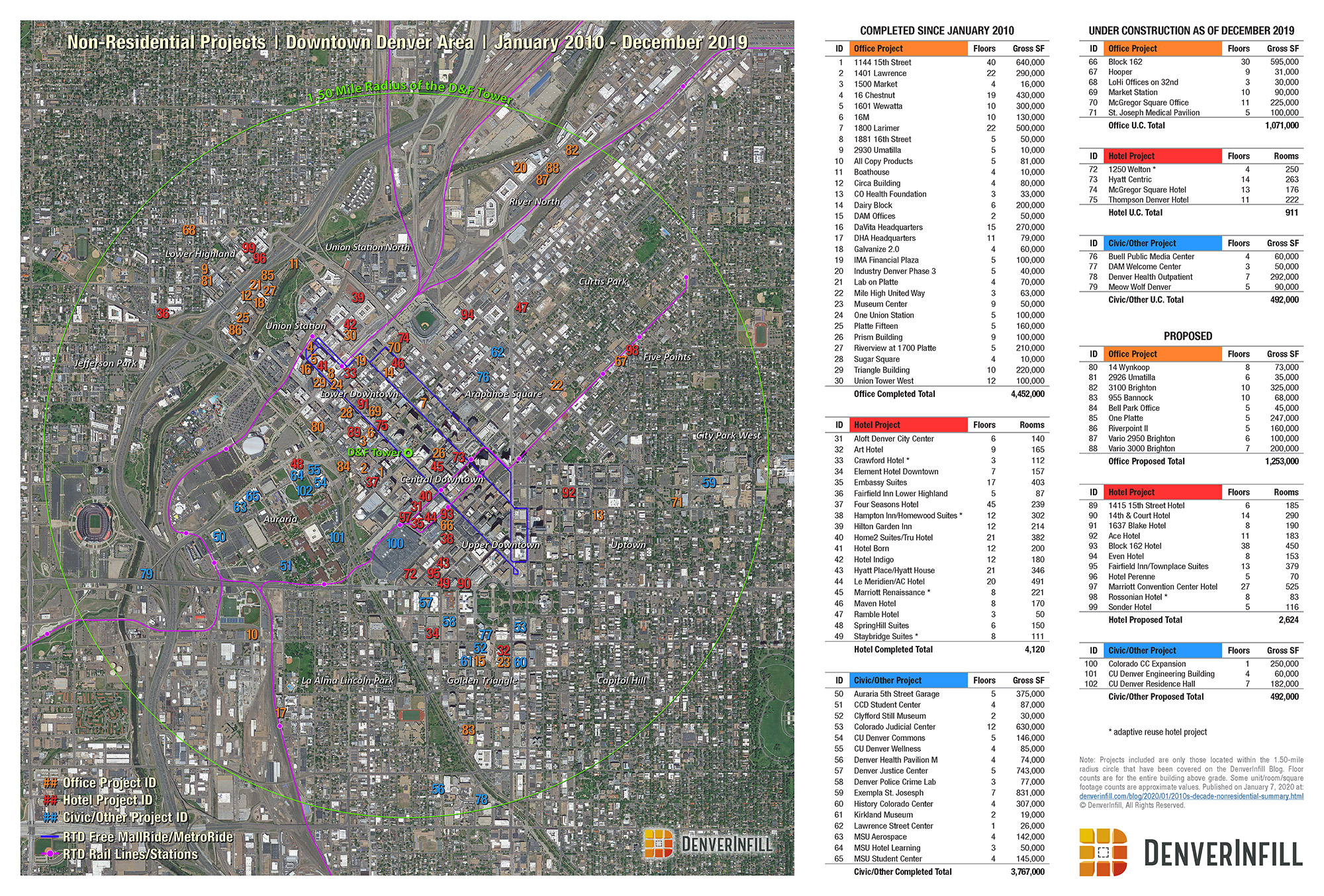 OFFICE
During the 2010s, 26 office projects totaling 4.45 million square feet of space were completed in our downtown survey area, by far the most office space developed in a 10-year span in downtown since the skyscraper boom of the late ’70s and early ’80s. The tallest of the new office towers this past decade include the 40-story 1144 Fifteenth, the 22-story 1800 Larimer, and the 22-story 1401 Lawrence. However, not to be overlooked are the dozen office buildings totaling around 2 million square feet of space that were critical in repairing the urban fabric in LoDo and, in the case of the Union Station district, creating the urban fabric from scratch. Also of note: the evolution of Platte Street as a micro-district within downtown, with six completed office projects totaling almost 600,000 square feet of space, and the emergence of River North as a new downtown office sub-market. While most of the 2 million square feet of office space in various stages of development in River North lies just outside of our survey area, the hot RiNo office market is a testament to the appeal of greater Downtown Denver.

Under construction in our survey area currently are 6 office projects totaling 1.07 million square feet of space, with the 30-story, 595,000-square foot Block 162 tower accounting for over half of that total.

Combining the Completed and the Under Construction figures gives us the total amount of office development in downtown that was physically implemented in the 2010s: 32 projects totaling 5.52 million square feet of space.

Another 1.25 million square feet of space in 9 office projects is proposed, which does not include the long-planned Two Tabor tower. We’ve removed that project from our Proposed list as there’s been no activity on its development application with the city since May 2018 (two months after it was filed) and the project’s website has been taken offline.

But let’s end this Office section on a happy note with this pretty picture of two of downtown’s newest office towers: 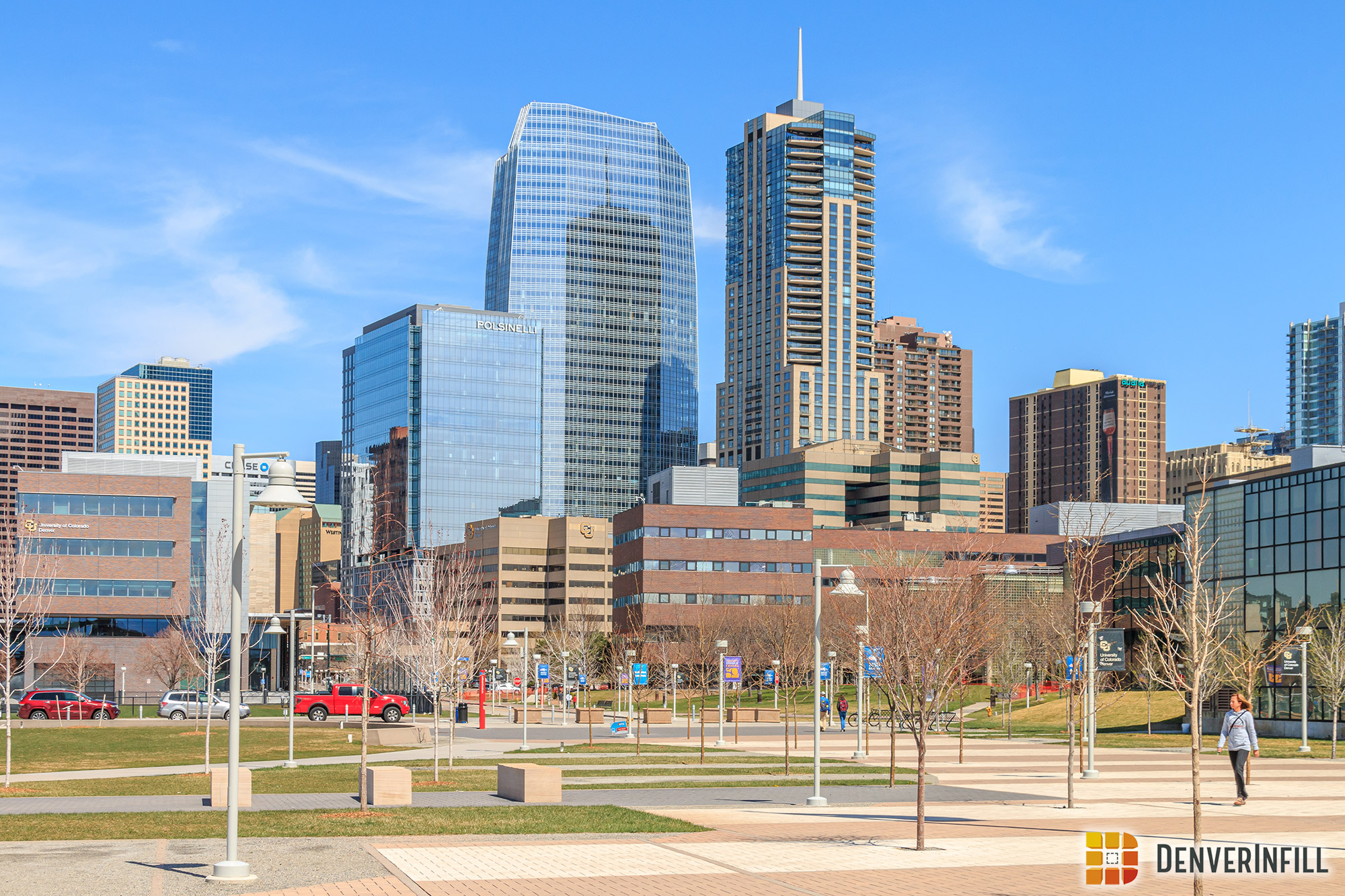 HOTEL
Perhaps one of the most surprising outcomes from the 2010s in terms of non-residential development in Downtown Denver was the hotel market. We began the 2010s with right around 7,000 hotel rooms in downtown. Since then, 19 hotels with a combined 4,120 rooms opened within our downtown survey area, giving us now a little over 11,000 hotel rooms in Downtown Denver, an almost 60% increase in downtown’s hotel room inventory in 10 years. Of those 19 new hotels, four were adaptive reuse/conversions of existing buildings (Crawford Hotel, Hampton Inn/Homewood Suites, Marriott Renaissance, and Staybridge Suites) and the other 15 were new builds. Dual-branded hotel properties were a thing in the 2010s, with four new projects added in downtown that host two different hotel brands each.

There are currently 4 hotel projects with a combined 911 rooms under construction in the downtown area. The McGregor Square hotel under construction next to Coors Field and the Thompson Denver Hotel at 16th and Market will both replace big holes in the urban fabric and contribute significantly to the pedestrian experience of downtown.

Adding these Under Construction figures to the Completed total gives us 23 hotel projects with 5,031 rooms that were physically implemented this past decade in our downtown survey area.

And hotel developers seem to think there is still room for more hotels in Downtown Denver. Currently proposed are 11 hotels with a combined 2,624 rooms.

While the hotels developed since 2010 can be found in all parts of the downtown area, most of them are clustered in two areas: around the Colorado Convention Center and around Denver Union Station. Let’s finish this Hotel section with a photo of one those new hotels near Union Station, the the Hotel Born next to the commuter rail platforms. 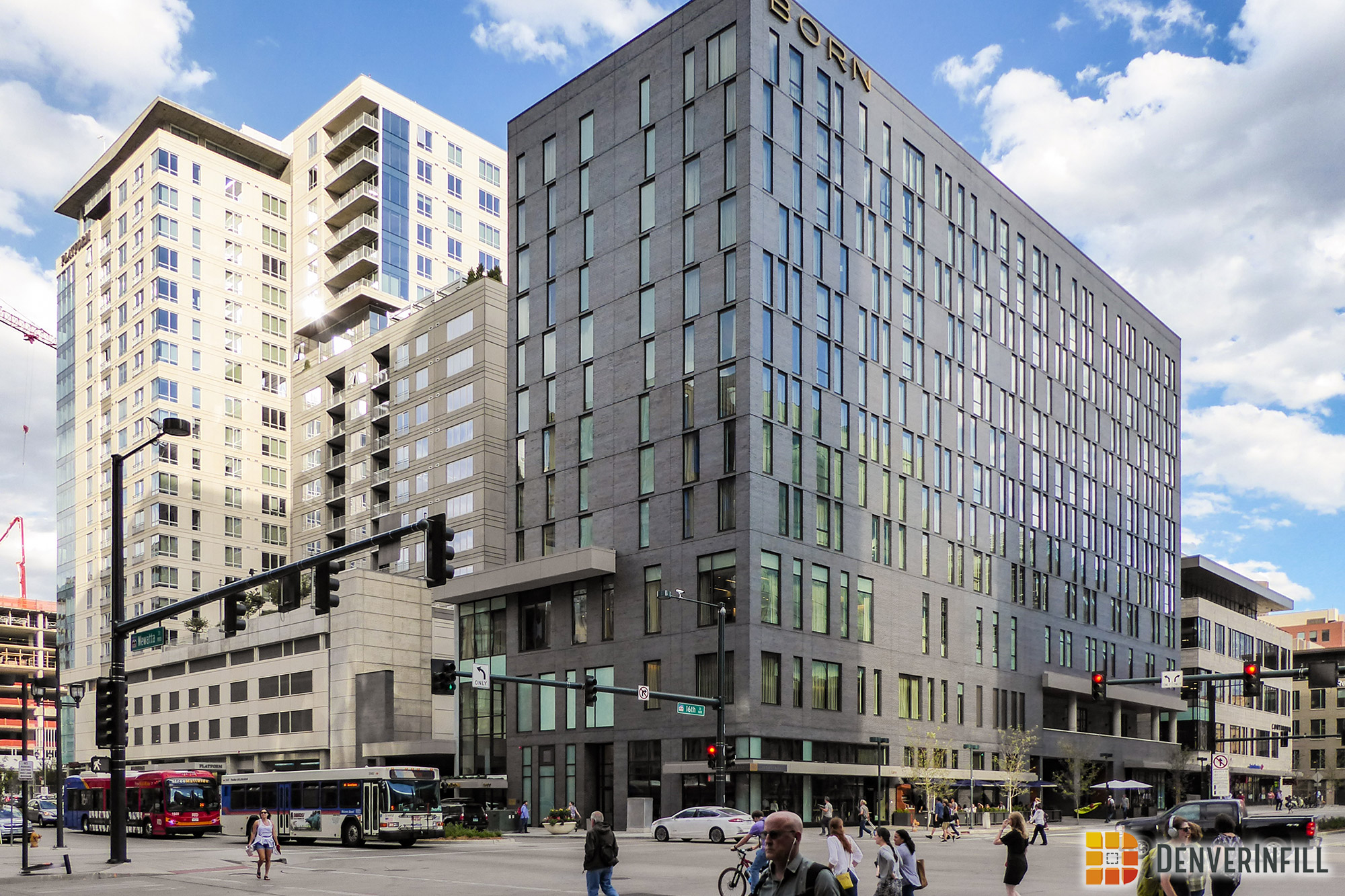 CIVIC/OTHER
A total of 16 projects with a combined 3.77 million square feet of civic, cultural, and educational uses were completed in the downtown area this past decade. Two of the larger facilities constructed were new justice centers for both the City and County of Denver and the State of Colorado. Downtown’s Museum District continued to grow in the 2010s with the addition of the new History Colorado Center, the Clyfford Still Museum, and the Kirkland Museum of Fine & Decorative Art. The Auraria Campus, home to 43,000 students, faculty, and staff, saw significant growth in the 2010s, with one new Community College of Denver building, two new University of Colorado Denver buildings, and three new Metropolitan State University of Denver buildings.

Proposed projects include the expansion of the Colorado Convention Center and several additional buildings on the Auraria Campus.

Finally, while not an infill development per se, one of the biggest civic projects that impacted Downtown Denver in the 2010s was the Denver Union Station Transit Center. Construction of the half-billion dollar transit hub began right at the start of the decade and finished in 2014 (and documented in our Denver Union Station Photo Gallery). RTD’s A Line connection into the terminal at Denver International Airport has transformed Union Station into Downtown Denver’s gateway to the world, just like it was in 1881 when it opened. 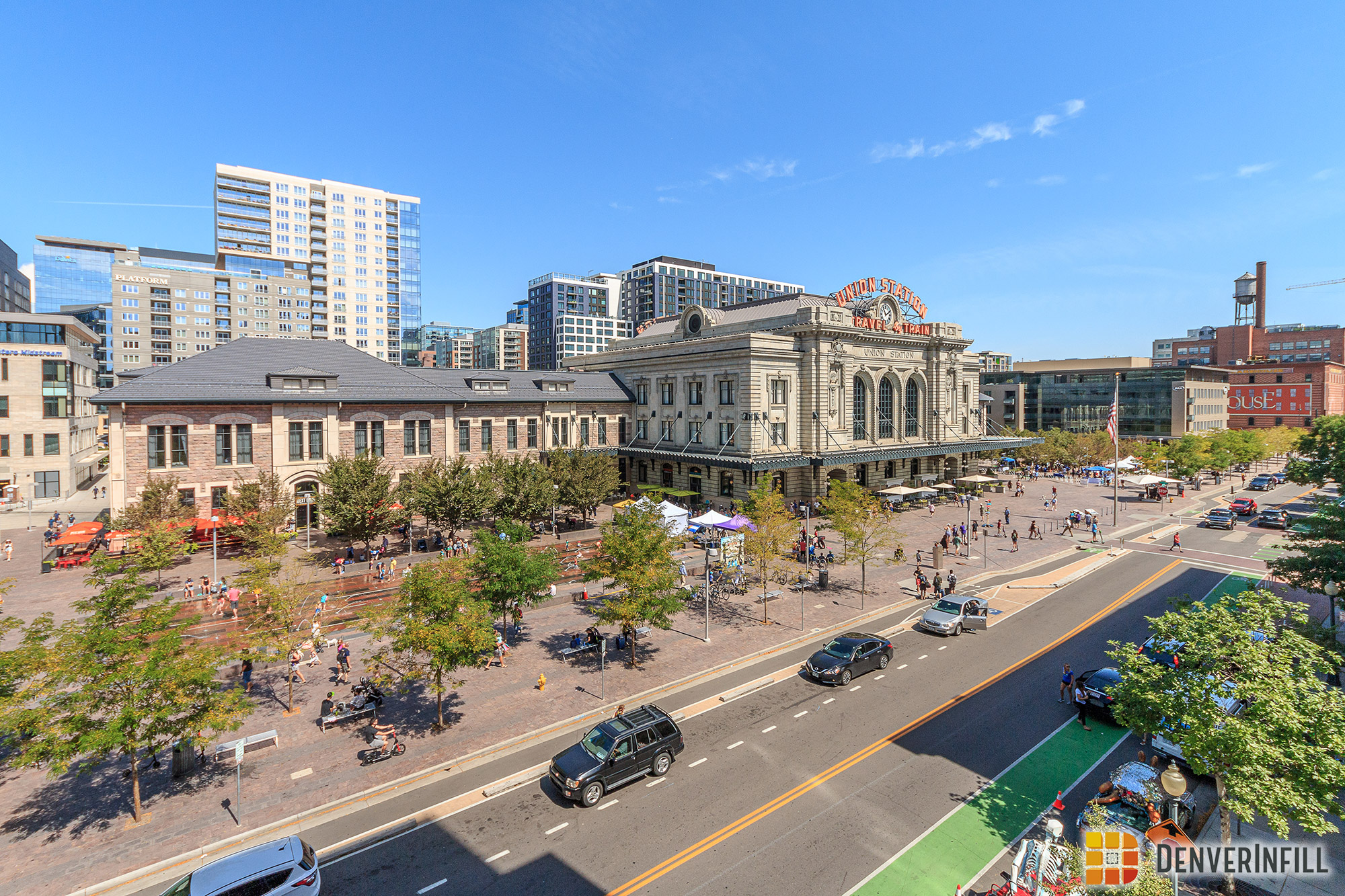 CONCLUSION
In total, 79 different office, hotel, or civic projects were completed or started construction in our downtown survey area in the 2010s, providing millions of square feet of space for people where, previously, surface parking lots dominated. Downtown Denver became a more walkable, vibrant, human-oriented place as a result of these new infill developments. The urban fabric of our city continues to heal.