The 2010s have come to a close, and what a decade it was for residential development in Downtown Denver!

Downtown entered the decade as the revitalized heart of the city and region, but it was still overly reliant on weekday office users, tourists, and sporting and cultural event attendees to provide the bustle on the sidewalks that reflects a thriving urban place. What was needed were more people living downtown who would fill the sidewalks as part of their daily routines heading to work or to public transportation, going to the grocery store or their local pub, or taking the dog out for a walk. And that is exactly what happened this decade. Downtown’s streets and sidewalks are now more lively then ever with people walking, rolling, and biking, particularly outside of weekday business hours.

In this post we will take a final look at the residential development numbers for the downtown area this decade. For the last five years or so, we’ve prepared semi-annual Development Summaries that tracked the pace of infill development for both residential and non-residential uses within a 1.50-mile radius of the historic D&F Tower at 16th and Arapahoe. The D&F Tower serves as a good geographic center for downtown, and a 1.50-mile radius (about a 30-minue walk) does a nice job of capturing the core downtown area plus the edges of the downtown adjacent districts like Uptown, RiNo, and Lower Highland. We skipped the June 2019 summaries so today we will look back at not only the entire decade, but what happened during 2019.

Below is our Downtown Denver Residential Summary exhibit for December 2019, giving us a decade-long view of residential development within our survey area. You can view/download a high-resolution PDF version (about 5 MB) of the exhibit here. 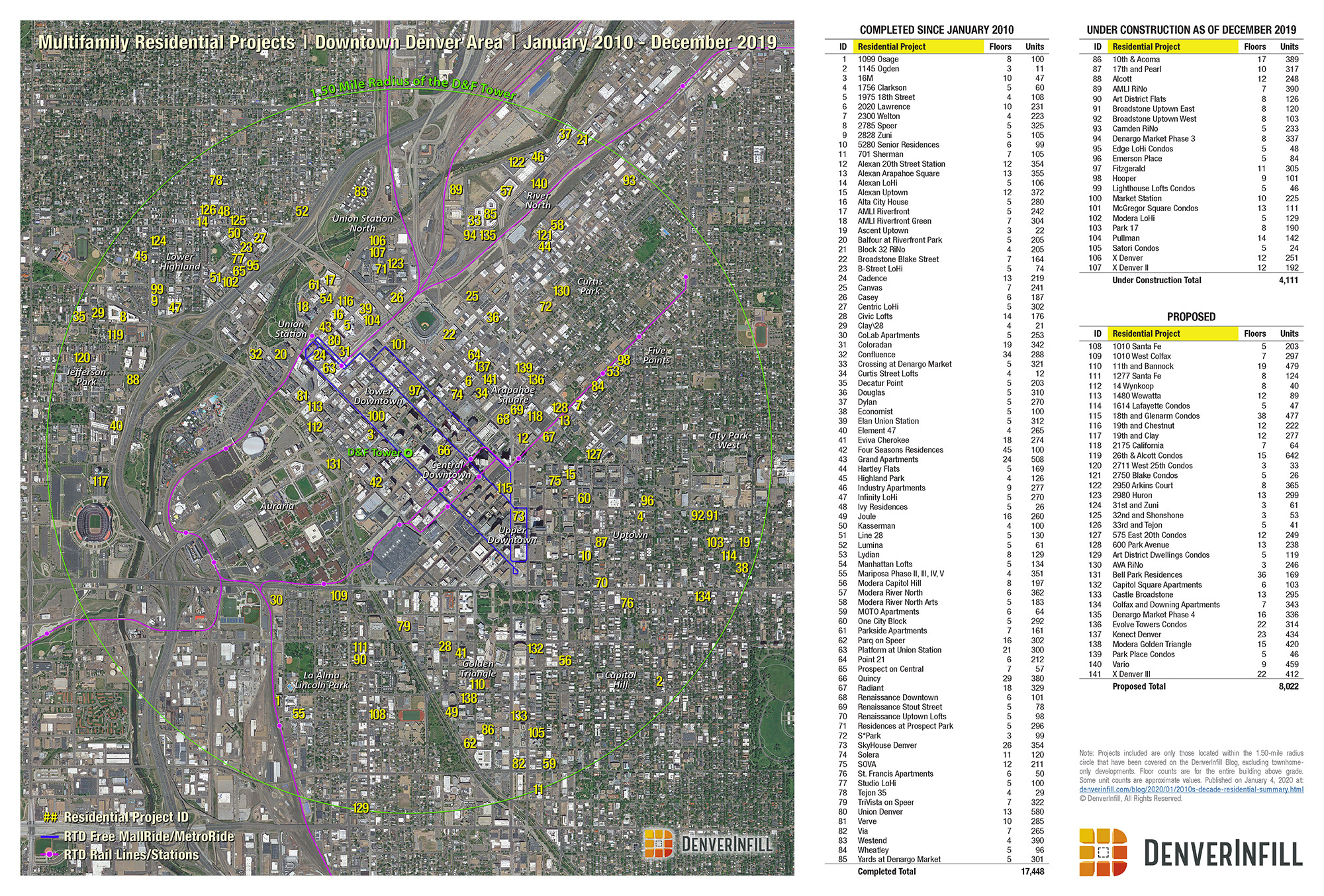 COMPLETED
In total, 17,448 new homes in 85 developments were completed inside our Downtown survey area in the 2010s. Of those, two projects totaling 220 homes (Four Seasons Residences and Solera) were pre-recession projects that didn’t reach completion until early 2010. The remaining 17,228 homes are all from post-recession projects. However, this total does not include any townhomes, rowhouses, duplexes, or adaptive reuse/conversion projects of which there were dozens developed this decade inside our Downtown survey area. If we were to add those in, the total number of completed homes would be around 18,000.

PROPOSED
In past Development Summaries, we covered proposed projects in two groups: the first was a Proposed category that included projects typically far along in the development review process that we had covered on the blog, and the second was an In the Pipeline category that was not itemized and represented a rough estimate of the projects in the early Concept Plan stage. Now that we are doing posts on projects at the Concept Plan stage, all proposed projects are now itemized and grouped together into a single Proposed category.

There are currently 8,022 homes in 34 projects in our Downtown survey area that are in some stage of active development review with the city. We have excluded projects that may have open cases but appear to be inactive due to lack of activity in the past nine months or so. This is particularly the case for projects with only a Concept Plan on file. The largest of the proposed projects include the 18th and Glenarm Condos (38 floors/477 homes), Bell Park Residences (36/169), Kenect Denver (23/434), Evolve Towers Condos (22/314), and X Denver III (22/412). One thing to note is the number of proposed condominium projects, nine of the 34, which is pretty good.

COMPLETED + UNDER CONSTRUCTION
If we combine the Completed and the Under Construction projects, this will give us a picture of the total amount of residential development activity physically implemented in our Downtown survey area this decade.

Together, 21,559 homes in 107 multifamily developments were launched or finished in the 2010s in our survey area, a response by the development community to Denver’s significant population increase from in-migration, downtown job growth, and the demand for urban living. At about 1.5 persons per household (average rate for the downtown area per the Census Bureau), this represents housing for over 32,000 people.

BUILDING HEIGHTS
Of the 141 projects that have been completed, are under construction, or currently proposed, there are 27 different building heights in terms of number of floors, ranging from a few three-story stacked flats to the 45-story Four Seasons. In the chart below, we’ve shown all of the possible building floor counts from 3 to 45 and a color-coded breakdown within each by project status.

As we can see, five-story buildings were, by far, the most popular building height in the 2010s.

However, most of the five-story buildings were completed in the first few years of the decade and, lately, the new projects have been getting taller. Earlier, I said the median of the “Completed + Under Construction” buildings was six floors. If we break those out, we find that the median number of floors for the Completed projects is five while the median for the Under Construction projects is eight and, for the Proposed projects, it is closer to nine. In fact, of the Completed projects, only 26% of them are 10 stories or taller, whereas 41% of the Under Construction projects are 10 stories or higher, and that percentage rises to 47% for the Proposed projects.

CONCLUSION
Overall, it was a fantastic year and decade for housing development in Downtown Denver. The vast majority of the 107 sites that were developed or are under construction were surface parking lots. Surface parking lots are entirely antithetical to the concept of urban and represent a condition that is hostile to pedestrians. Since an urban center like Downtown Denver is, and must always be, a pedestrian-prioritized place, getting rid of surface parking lots is one of the most fundamental things we can do to improve downtown. The presence of these new buildings and the human activity generated by them have transformed Downtown Denver into a more vibrant, truly urban and pedestrian-oriented place where people can, and should, rely on walking, rolling, and transit as their primary means of getting around. Moving forward into the 2020s, we need a.) more affordable homes, b.) more condos, c.) more homes for families, d.) fewer buildings with unsightly parking podiums, and e.) parking maximums… just to name a few.

Up next, our Non-Residential Development Summary for the 2010s!