On Wednesday, December 18, 2014, the City of Denver Planning Board approved the general development plan (GDP) for the redevelopment of the former St. Anthony’s Hospital site on the south shore of Sloan’s Lake in the West Colfax neighborhood of Denver (the GDP was officially signed on Tuesday, January 14). The GDP will transform the old hospital site into a mixed-use urban town center across from one of Denver’s largest parks and minutes away from the new Perry Street light rail station on the new West Line. With passage of the GDP, EnviroFinance Group (EFG), the owners and horizontal developers of the property, (i.e. they don’t build buildings) now have the go ahead to build new streets, install infrastructure, and sell parcels to vertical developers (i.e. those who DO build buildings). The following diagram (courtesy of RNL, the site planners of the project) shows how this project intends to link to the park and the existing transit stop. 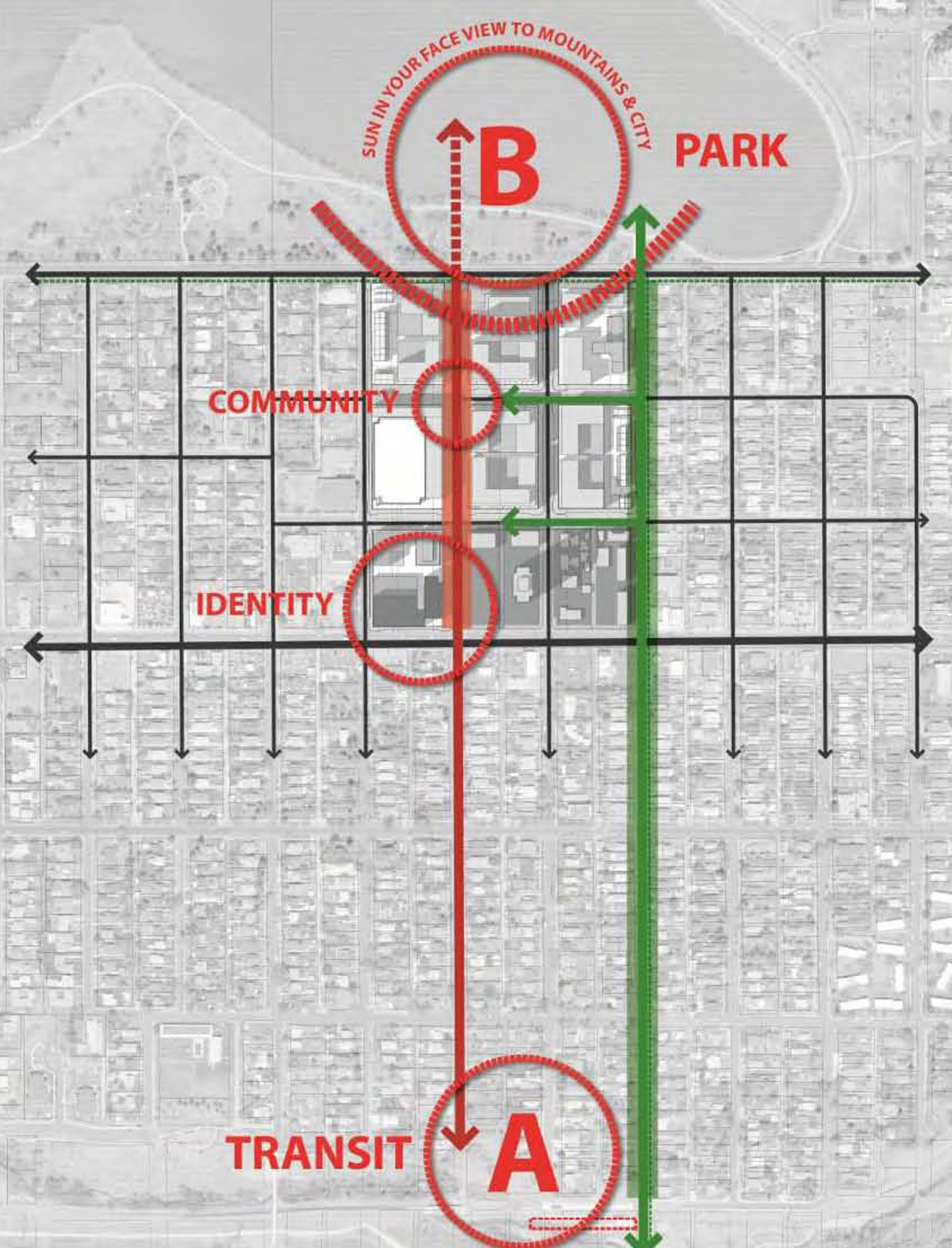 The plan for the site reintegrates the Denver street grid, by extending Raleigh and Quitman Streets as well as West 16th Avenue into the site, creating six new Denver-standard blocks. Raleigh Street is to become a new main street through the development complete with ground floor retail, restaurants, office space and an exciting new anchor development (similar to the Lowenstein project on East Colfax) where it meets West Colfax (the circle labeled “identity” in the above diagram). The right-of-way along the new Raleigh Street will be wider than Denver’s minimum requirements in order to accommodate additional pedestrian amenities, street trees, and sidewalk cafes as shown in the following conceptual rendering: 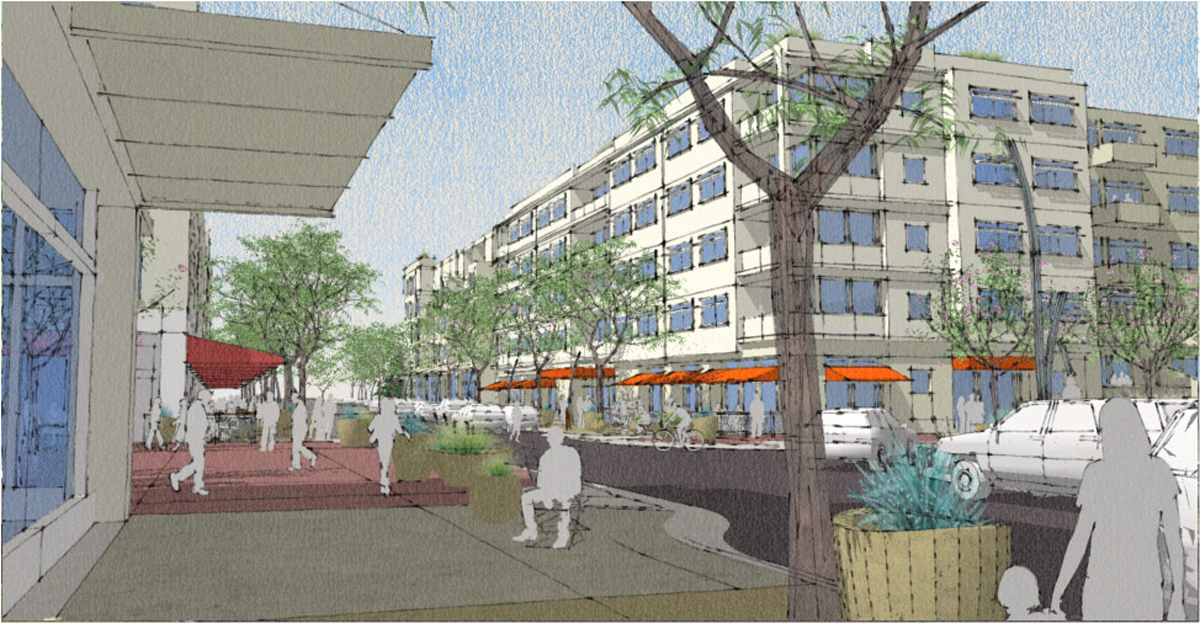 In 2006, a task force of local residents set forth a vision for the site that included the reintroduction of the street grid, a dense mix of uses for the site, and preservation of some of the existing buildings. The developer has followed their instruction and is retaining four buildings on the site: The 1940’s Kuhlman building (a former nurses dormitory which is slated to become a new boutique hotel), the existing 4-story parking garage, a 4 story-office building on the block near Colfax (which will be re-skinned), and a historic chapel on the site. The historic chapel happens to fall within what would have become the West 16th Avenue right-of-way, but the developer has chosen to stop the street short of the chapel and create a 1-acre public plaza in front of the chapel as part of the project’s open space requirement set forth by the city. West 16th Avenue will be designed in such a way that it could be closed down to extend the plaza for festivals, farmers markets, and other events in the neighborhood. As part of EFG’s efforts to achieve LEED-ND Platinum certification for the project, they are planning on installing natural storm water management features along West 16th Avenue as well. The following is a conceptual site plan of the project: 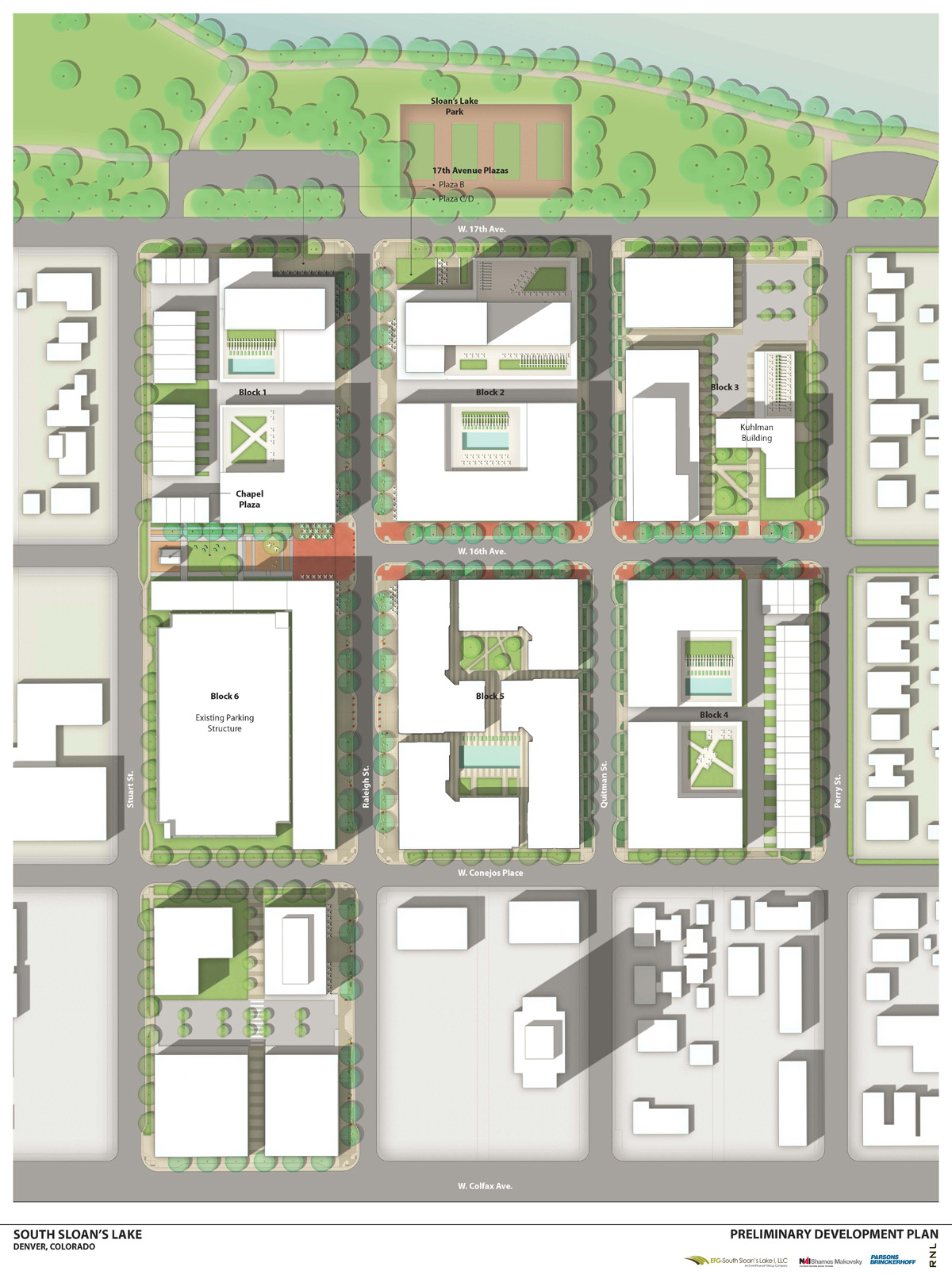 As of now, EFG has almost completely demolished the hospital and is currently grinding up all the old concrete to be reused as road base for the new streets. Early this year, they’ll start re-grading the site, installing utilities, and creating the new streets. The photo below is  a panorama of the site taken from the top of the Metro Village Apartment tower at Colfax and Quitman Street. The photo shows the breadth of the site and some of the great views that will be had by the new residents. You can also see the Kuhlman building (on the upper right) the parking garage (on the left) and the little chapel (behind the parking garage) that are being saved as part of the development.

When the project is complete, the seven city blocks under redevelopment will likely contain 800-1,200 new residential units and 75,000 – 150,000 square feet of neighborhood-serving office/retail space in buildings that range in height from two to twenty stories (although anything over 5 stories will have to go through a re-zoning process). According to the developer, “the redevelopment of the former St. Anthony Hospital campus will create a new sustainable urban neighborhood that has a unique identity, informed in large part by its engagement with Sloan’s Lake Park.” The mixed-use project certainly capitalizes on its proximity to multiple modes of transit, and brings neighborhood-serving retail to a currently under-served neighborhood. The St. Anthony’s project should be a very exciting infill development in Denver and will hopefully be a catalyst for significant reinvestment along West Colfax Avenue.

For more info on the Plan for this development, go to: www.sloansdenver.com. EFG currently has three developers on contract to develop Phase 1 of the development. Each developer will be unveiling the plans for their buildings at an open house on January 22, 2014 from 5:30-7:30 PM at 1400 Quitman Street (just south of the project site). After the unveiling, EFG will post the developers’ plans and renderings to their website, so stay tuned. St. Anthony’s should be an exciting urban infill project!