Thanks to some sleuthing by a couple of DenverInfill regulars, the new infill project going in at the southwest corner of 17th and Franklin in the City Park West neighborhood has been identified as The Residences at Franklin Square. The boarded up commercial building right at the corner (see my blog of July 6) is now gone. The first phase of Franklin Square currently under construction immediately to the south consists of five 3-story townhomes, with five more planned for the corner site. The units are reported to be 1,900 – 2,900 SF in size. The project is being developed by Len Goldberg, owner of Place LLC, who’s also developing the Blueprint project at East Colfax and Madison. I haven’t found a rendering yet, but supposedly Franklin Square will be similar in appearance to the Washington Square project on the 1200 block of Washington Street (see Project # 7 on the Capitol Hill neighborhood page).

The Upper Larimer development at 34th and Larimer (see Project # 25 on the Curtis Park-Five Points neighborhood page) now has their website (www.upperlarimer.com) up and running. The website includes several new renderings of the project, as well as floorplans and pricing. 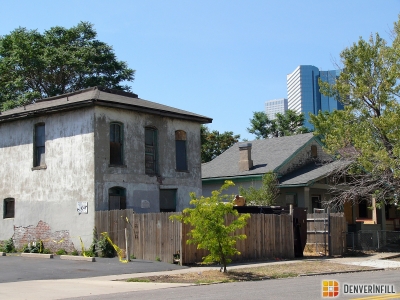 Talus is also wrapping up a major building renovation just down the street at Park Avenue and Champa. The building, formerly the Guadalajara Bus Station, is now known as the Sno White Lofts, and features five live-work units. For more information, go to their website at www.TalusBuild.com. It’s great to see Park Avenue’s transformation taking place through both new construction and building rehabilitations. Along with Century Real Estate’s Welton Place project at Park Avenue and Welton, the proposed Triton project, the East Village redevelopment, and many other completed or planned projects in the area, the Park Avenue corridor may some day soon live up to its name.