I’d like to introduce Andy Vuong (not the Denver Post writer) as a new contributor to DenverInfill. Andy is a management consultant who lives and works in the Union Station neighborhood and is an avid proponent of urban density. Andy will be providing updates on the Union Station project while Rick is out of town for the next couple of the months. Here’s his first post:

Greetings Denver infill community! As I connect with Rick’s contacts at Kiewit, you can expect longer and more informational updates.  For now though, updates will be brief and generally based on observations.

Big News!! For the first time on the project, there is construction activity in front of and adjacent to the historic building.

Over the past 6 weeks, a new series of fences have gone up around the former parking lots that straddled the station. That’s right…I said former…because the parking lots that used to exist are now history. Also gone are the sidewalk and traffic lane of northbound 16th Street between Wynkoop and Wewatta which were dug up to install a new sewer line underneath. Here are a couple of pictures that show how the west parking lot and 16th Street looked about a week ago. Apologies in advance for the terrible shadows in the first pic—I was going to take a replacement, but then the snow storm hit! 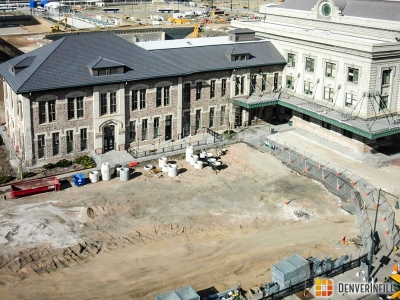 No word on when 16th Street will go back to two lanes, but for now, mall shuttles going each direction are sharing the remaining southbound lane. Additionally, this new traffic pattern has resulted in the closure of the southbound Wynkoop mall shuttle stop.