Those of you who have been following DenverInfill for many years will probably remember the Pinnacle Station project proposed by the Spanos Company for the former Baby Doe’s/Chili Peppers site in Jefferson Park. Although the project was ultimately approved by the city, it traveled a rocky road with the Jefferson Park neighborhood, due to the scale and design of the project that seemed incompatible with the adjacent housing. Before the project could get under construction, however, the economy tanked, and so the project was put on hold.

The project is now back, but with a new architect and design, a new name, and at a smaller scale.

Element 47 (the atomic number for silver) is a four-building, 265-unit apartment project. That’s about 100 units less than the 2007 Pinnacle Station version of the project. Each building will be four-stories in height, with one building having a 4,000 square-foot retail space. Here’s a GoogleEarth aerial where I’ve marked the project location: 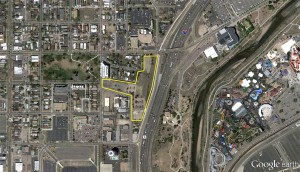 The new project architect is Denver-based Kephart. All of the following images are from Kephart’s website. First, here is the site plan: 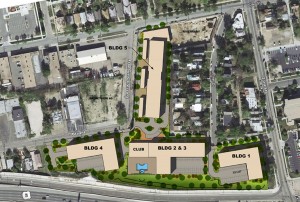 Next, a few renderings: 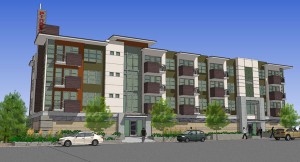 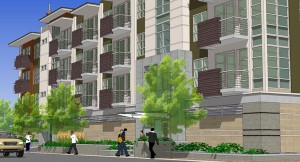 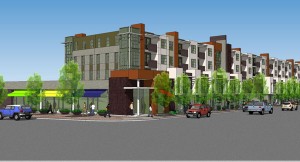 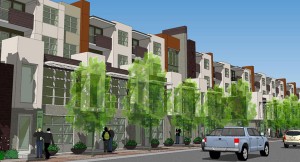 Construction on Element 47 is essentially underway. A building permit for the project was recently issued and, two weeks ago when I visited the site, construction equipment was being mobilized and the grounds were being cleared of its old parking lot asphalt and landscaping.

Finally, after a five-year hiatus, Jefferson Park will see this important site be developed, and with a massing, scale, and design that is more compatible with the neighborhood.