It’s been about six weeks since we last looked at the massive Denver Union Station redevelopment but not a lot has changed. However, in our last update we looked at the project from afar and didn’t really get a closer look at all of the great individual elements. Unfortunately, this isn’t an inside tour but, armed with a great zoom lens and thanks to some great vantage points around Union Station, I was able to get some great close up shots. So you can see more detail, I bumped up the resolution on all these photos. Make sure you click to embiggen!

Let’s start off with the 18th Street pedestrian bridge. This is very similar to the Millennium Bridge when coming from Downtown. The elevator will be situated to the left with a bike track on the side of the stairs so you don’t have to carry your bike over the bridge. On the Union Station side, there are four sets of stairs going down to the commuter rail platforms which will also lead you to Wewatta Street. 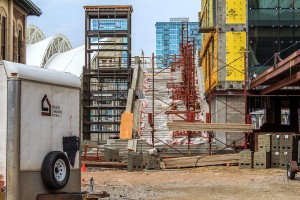 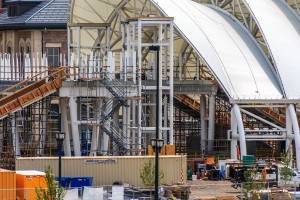 The metal screen that is going across the bridge isn’t at all intrusive. You will be able to watch the trains under you and still feel out in the open! 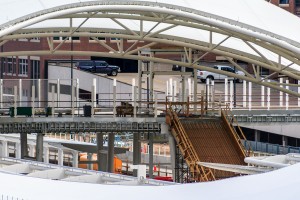 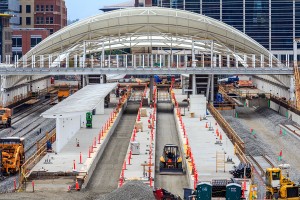 The north side of Wynkoop Plaza is coming along very nicely. The trees have been planted, the hardscaped benches are starting to get installed, and it looks like it will only be a matter of time before we will start to see the granite pavers go in. 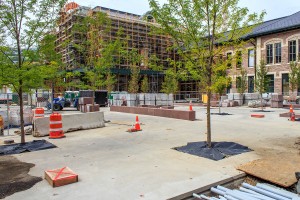 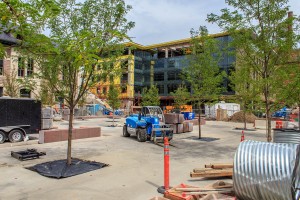 Here is an above view of the north side of Wynkoop Plaza. 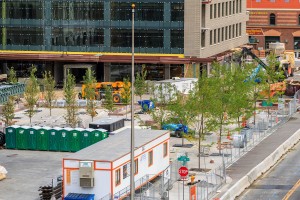 The south side of the plaza is not as far along as the north side because of a few reasons: The South Wing building started after the North Wing, and since this side of the plaza will have the magnificent fountain feature, a lot more underground work had to be completed first. The fountains however are looking more and more complete! 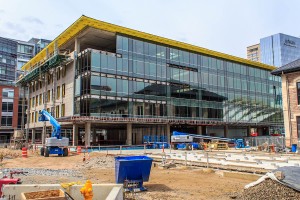 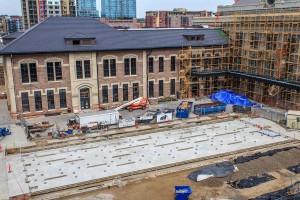 Speaking of the Wing Buildings, they are also starting to come together making a huge difference along Wynkoop Street. The first floor of these buildings will be ground floor retail and 4-stories of office space above. Floors 2 through 4 are covered in brick and the 5th floor has a modern glassy facade. Both buildings have glass curtain walls facing the plazas. Here is the North Wing Building which will be occupied by IMA Financial. 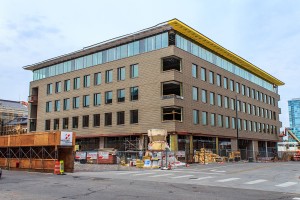 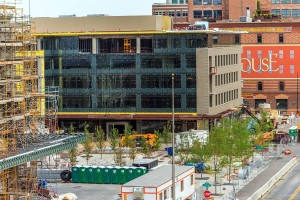 And the South Wing Building which will be occupied by Antero Resources. 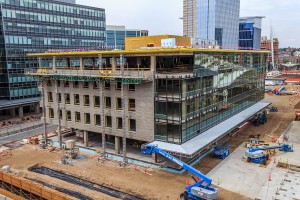 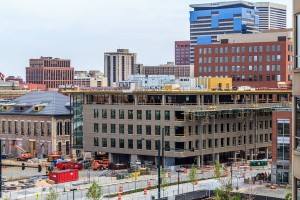 Now let’s head over to the commuter rail train hall. There has been a lot of concern about shelter from the elements when waiting for the train. Fear not! If you look closely you can see each platform will have some kind of shelter. Plus, we have 300 or so days of sunshine a year, we wouldn’t want to be completely enclosed while waiting for the train! 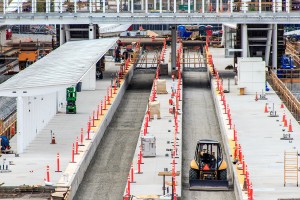 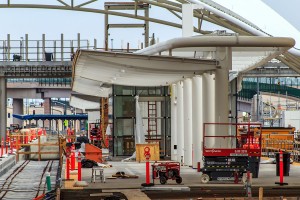 Here are a couple more shots of the completed commuter rail canopy. The land towards 16th Street in front of the canopy is part of the L-Shaped ‘A Block’ and will get developed one day so let’s enjoy this great open view of the canopy while it lasts; not saying having it closed in wouldn’t be a great sight as well! 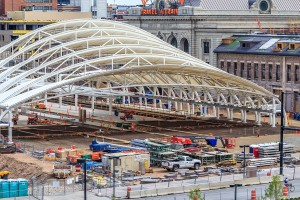 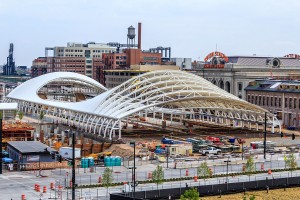 Let’s wrap up with a shot of the newly opened Wewatta Street. It isn’t very pedestrian friendly at the moment because of three factors: 21-story, 13-story, and 10-story buildings are all under construction between 16th and 17th Street! Also, if you look closely, you can see the continuation of the 17th Street Gardens in the foreground of the Wewatta Pavilion. 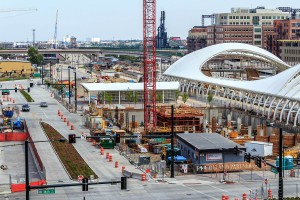 May 9th is the day we will be able to experience the brand new Union Station. 8 months to go!