If you’ve driven by I-25 and Broadway lately, you might have noticed that the old Gates Rubber Factory is finally coming down. This demolition has been over a decade in the making and sadly does not give us any reassurance that the site will be redeveloped anytime soon. Over at DenverUrbanism, Ian Harwick has offered his perspective on what the redevelopment could become, but if you’re new to the project, or just can’t remember the details of this lengthy process, here’s a timeline, map of the project and some photos of the redevelopment. (But first, here’s a picture of the demolition) 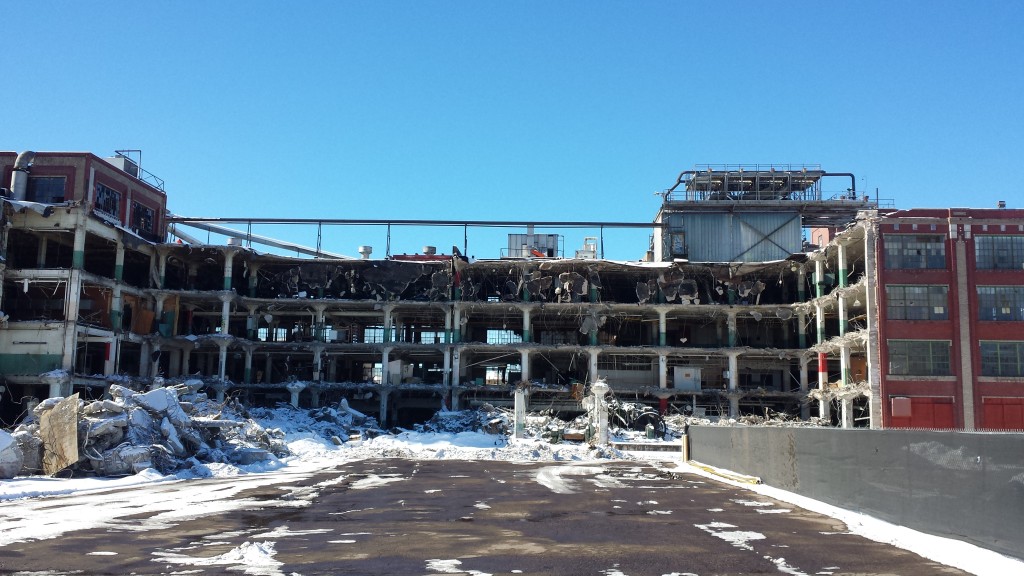 2001 – Cherokee Denver purchases the heavily contaminated, 62-acre site between Broadway and Santa Fe Drive from the Gates Corporation (Gates later sells 30 acres of property east of Broadway to the Lionstone Group; this property is currently in various stages of redevelopment)

2007 – Trammell Crow Residential purchases uncontaminated land south of Mississippi for construction of a new mixed-use residential apartment building with street front retail. Thanks to a community benefits agreement drafted early in the planning process, this building has a sizable affordable housing component.

2008 – Economy tanks. Amidst financial troubles, Gates takes the property back from Cherokee Denver

2013 – Gates tries to pull permits to demolish the buildings (so it can finish soil remediation under the buildings and remarket the land to a new developer). Permits were delayed by a last-minute attempt by a University of Colorado student to get the building listed as historic. When the historic preservation committee turned down his request, demolition permits were granted.

2014 – Demolition begins and should continue for the next 12 months or so.

At this time, the Gates Corporation is committed to cleaning up the property and finding a new development partner for the 62-acre site. As a formal GDP has already been filed, any developer looking to make major changes to the plan will have to go through a public process. Doing so would only push vertical development further out. Given the high demand for transit-oriented development (the property is adjacent to the Broadway Light Rail Station) in Denver, however, there is hope that one day this property will become a thriving, mixed-use, dense, urban development as anticipated over a decade ago. For now, we get to watch as this old factory slowly succumbs to the bulldozers and backhoes.

Map of the Project: 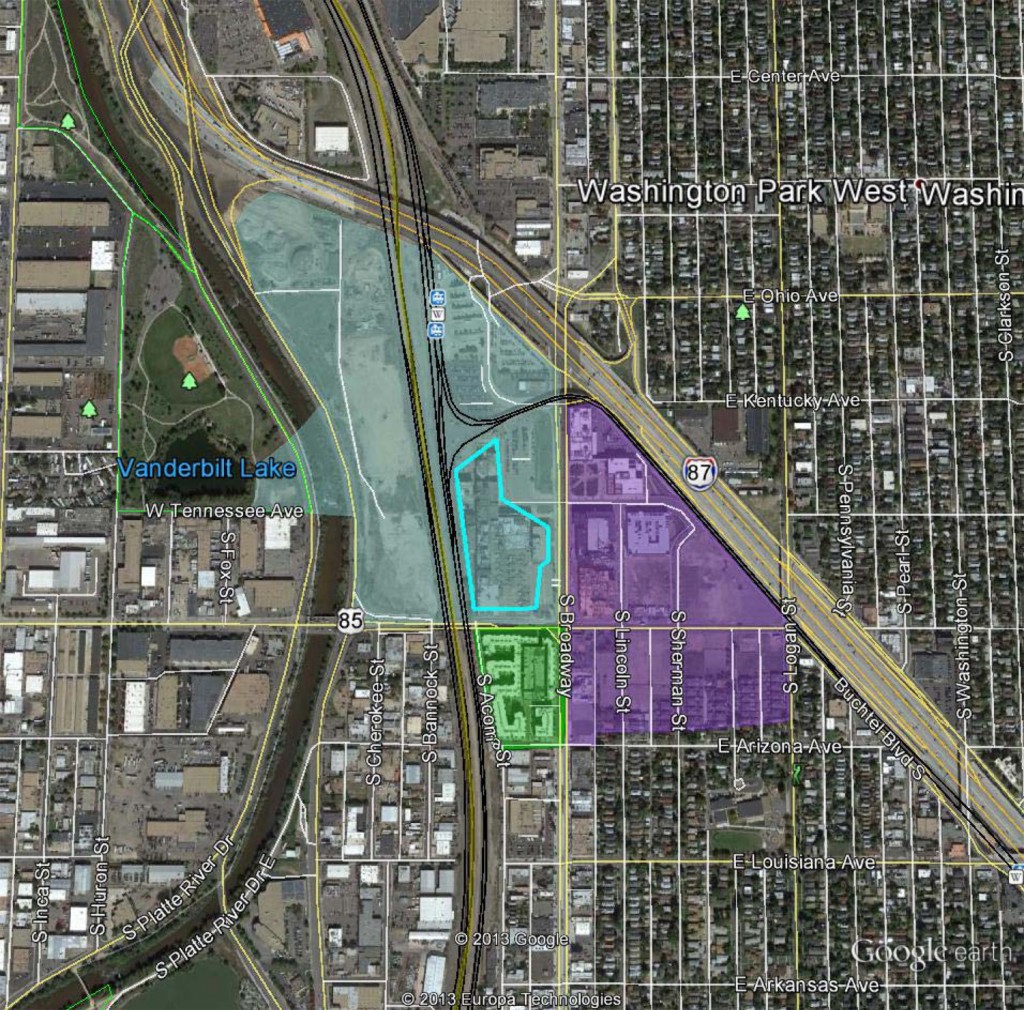 At over 90 acres, this is a huge infill development project. In the map above, I’ve divided the land into its various development components:

The green area was purchased by Trammell Crow and has been redeveloped into the Broadway Station Apartments.

The blue area was the area originally purchased by Cherokee Denver, now owned by the Gates Corporation, the current demolition is outlined in cyan. The GDP for the project only covers this site as it is in the greatest need of infrastructure.

The purple area was purchased by Lionstone Group and is now in various stages of redevelopment. First, there is a new office complex housed in two former Gates buildings. This was redeveloped several years ago along with a new parking garage. Second, there is the (currently under construction) 1000 S Broadway Apartments. This is a massive block-long four-story apartment building that has been architecturally divided into smaller chunks so its not so imposing. Parking for the building is provided in a four-level parking structure in the center of the project and wrapped by apartment units. Behind the office complex and apartments, there is some land that is just now being prepped for townhome development as well as some additional vacant land that does not appear to have any set plans at this time.

Now for a few photos:

Here is the soon to be completed 1000 S. Broadway apartment complex.

I especially like this red component at the north end of the project.  Very striking against our blue Colorado Sky. 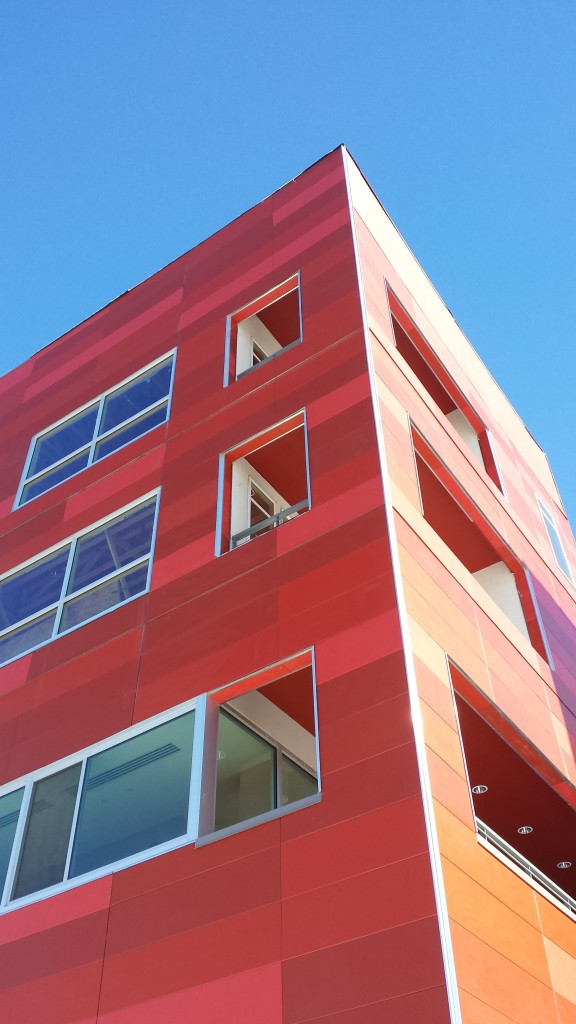 And here’s one last picture of the demolition. This is a huge building, and I couldn’t get a really good panorama, but the building extends down another full block from the left side of the picture. Demolition will continue for a long time and should be interesting to watch. 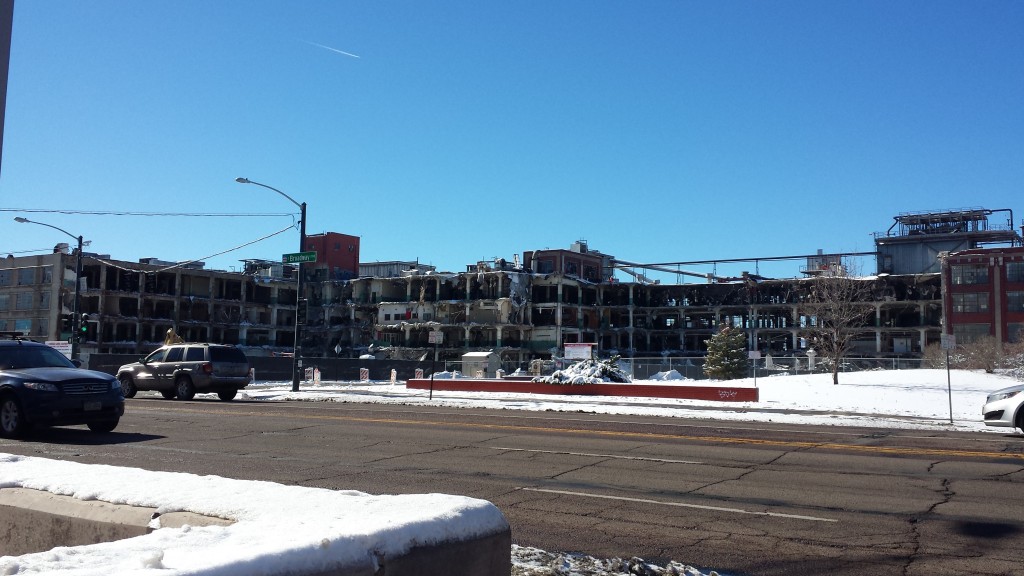 DenverInfill will continue to cover the redevelopment of Gates as new information becomes available.