This Past weekend, the City of Denver celebrated the opening of the new Rodolfo “Corky” Gonzales Library in the West Colfax Neighborhood. This library is one of three components of the Mile High Vista Project that I first introduced in 2013. Here’s a photo of the project as it stands today. 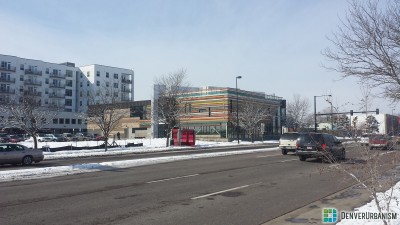 I realize that I’ve been a bit behind on posting about this project (the first component a 7-story workforce housing project south of the library opened last fall -more about that later) but last fall I took a job as City Planner for the City of Evans and have moved to Northern Colorado. Anyway, I made it down for the grand opening celebration last Saturday and thought it would only be fitting to give everyone an update.

The new 25,000 SF library is a very modern, colorful and highly textured addition to a very busy Colfax intersection. While the form of the building is basically a rectangular box the colors and textures really make it stand out within the neighborhood. Neon signage incorporated into the Facade ties back to the historic Colfax “car culture” of the ’50s and ’60s and the colorful horizontal lines speak to the “speed of travel,” not just of cars but also of information. Here are two closer views of that colorful facade. 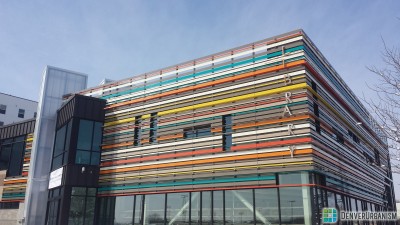 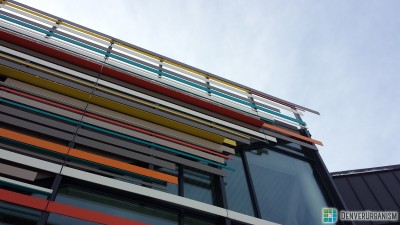 With two entrances, one at the corner of Colfax and Irving and the other on the east side facing the parking lot, it is open to both walk-up and drive-up traffic; perfect for a neighborhood that is transitioning from a car-only neighborhood to one that’s more walkable and transit-able.

Inside the library is very open, modern and glassy. There’s a lot of natural light (especially from the north side facing Colfax) and bright modern colors are used throughout the building. Reading rooms open to views of downtown, the mountains, and the Cheltenham Elementary School grounds diagonally across Colfax from the Library. If you’d rather escape from the hustle and bustle of the city, there is a interior courtyard on the second floor where library users can sit outside during the warmer summer months. Here’s a shot of a lower level reading area along Colfax and the main stairway to the second floor. 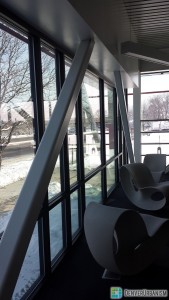 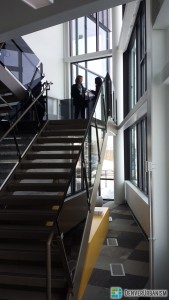 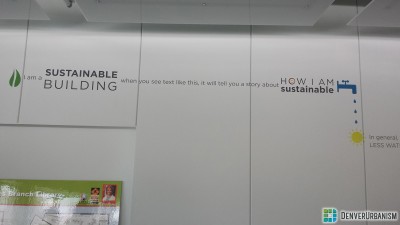 Now a little update on the Workforce housing project.

The “Avondale Apartments” which opened last Fall contains 70+ units of affordable housing plus amenities, and some rentable office space on the lower two levels.  The building is quite modern and almost minimalist in its color and material palate. It serves as in interesting counterpoint to the more richly decorated library. (Side note: I took these pictures last October, so I apologize for them looking warm and sunny while we still have snow on the ground.) 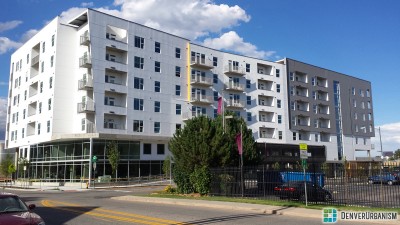 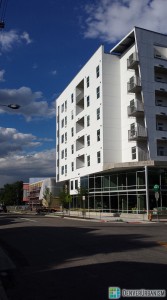 This building met LEED Gold standards (an amazing feat for an affordable housing project) and includes a rooftop solar array (sadly invisible from the street). While the 7-story building dwarfs the 2-story library, it blends in just fine with the four 8-story apartment towers built in the ’60s that currently exist to across the street to the south. This photo shows the new building in relation to the older towers. 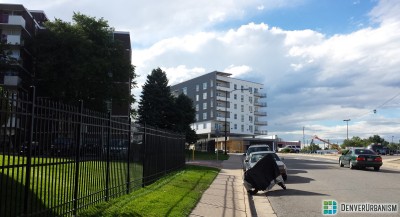 The last component of this project, which has yet to be realized, is a retail pad just east of the Library along Colfax to be developed by the Urban Land Conservancy. The following picture shows the site from inside the library. Development of this parcel will help create even more of a street wall along Colfax and bring some needed retail and potential office space to the West Colfax corridor. Unfortunately, it might also block a portion of this great view of Downtown and Mile High Stadium from the second floor of the Library. 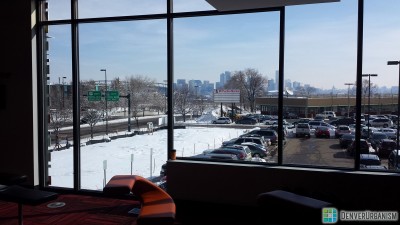