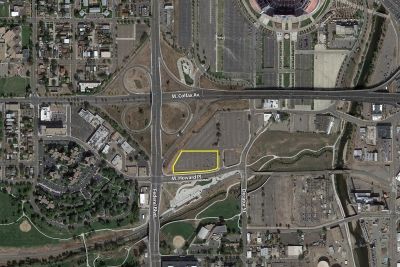 The new building in the Sun Valley neighborhood just southwest of Downtown Denver will house both CDOT’s statewide Headquarters as well as its Region 1 office (the Denver metro area is CDOT Region 1). Currently, both the Headquarters and Region 1 offices are located in southeast Denver in separate old, inefficient buildings that are in serious need of upgrades. By constructing one modern, efficient facility for both offices, CDOT will realize significant savings on building operations and maintenance and provide a better working environment for its employees. The new facility will be financed through the use of Certificates of Participation—the same process used by the state to finance the History Colorado Center and Ralph Carr Colorado Judicial Center projects—which does not involve funds budgeted for highway construction. Here’s a site plan, courtesy of CDOT: 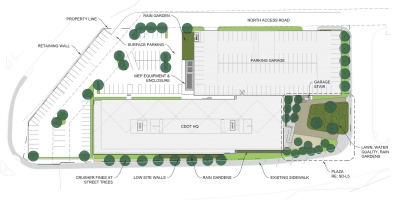 CDOT is acquiring the land for their new Headquarters from the Metropolitan Football Stadium District, the owners of Mile High Stadium. Currently, the site is used as surface parking for stadium events. The new CDOT facility will include a parking garage with around 500 spaces that will be available to the public for evening and weekend stadium events.

Here are a few early conceptual models of the new building, courtesy of CDOT. The project architect is RNL Design and JE Dunn will be the general contractor.

From an urbanist perspective, this is a good move by CDOT. Their current Headquarters and Region 1 buildings are not particularly convenient to public transit. The new location will allow visitors and the 700-plus CDOT employees who will work in the new building direct access to light rail and several major bus lines along Federal and Colfax that stop at the Decatur-Federal station. The site is also adjacent to the Lakewood Gulch and Platte River trail systems.

Construction is expected to begin in November 2016 with completion slated for early 2018.