An exciting new chapter in the saga of the development of Downtown Denver’s Block 162 opens with the submittal of the Block 162 Hotel project to the Denver Landmark Preservation Commission.

We’ve covered Block 162 quite extensively here at DenverInfill, stretching back to the middle of the last decade. The first phase of the redevelopment of this key block in the heart of downtown, a 30-story office tower, is currently under construction. Ryan gave us an update a few weeks ago on the Block 162 office tower.

Back when the office phase was first announced in January 2016, the project was envisioned as a two-phase development consisting of an office tower located along 15th Street and a hotel tower situated between the office tower and the historic Sage and McClintock buildings along the 16th Street Mall. The rendering provided in our announcement post shows the two-tower arrangement, although the architectural design, massing, and positioning of the hotel tower on the block in that rendering was just conceptual at that point.

The Block 162 Hotel component is now moving forward with the submittal of the project to the city’s Landmark Preservation Commission (LPC), which will review the project for the first time at their September 18 meeting. The LPC is involved because the proposed hotel project will incorporate the McClintock building, a contributing structure to the Downtown Denver Historic District.

The proposed Block 162 Hotel would rise 38 stories and contain approximately 450 hotel rooms and around 100,000 square feet of meeting/event space.

Here’s a recent photo of the McClintock building at the corner of 16th and California. In the background is the construction of the Block 162 office tower. Also to provide some context, we’ve included a bird’s-eye Google Maps image of the block. 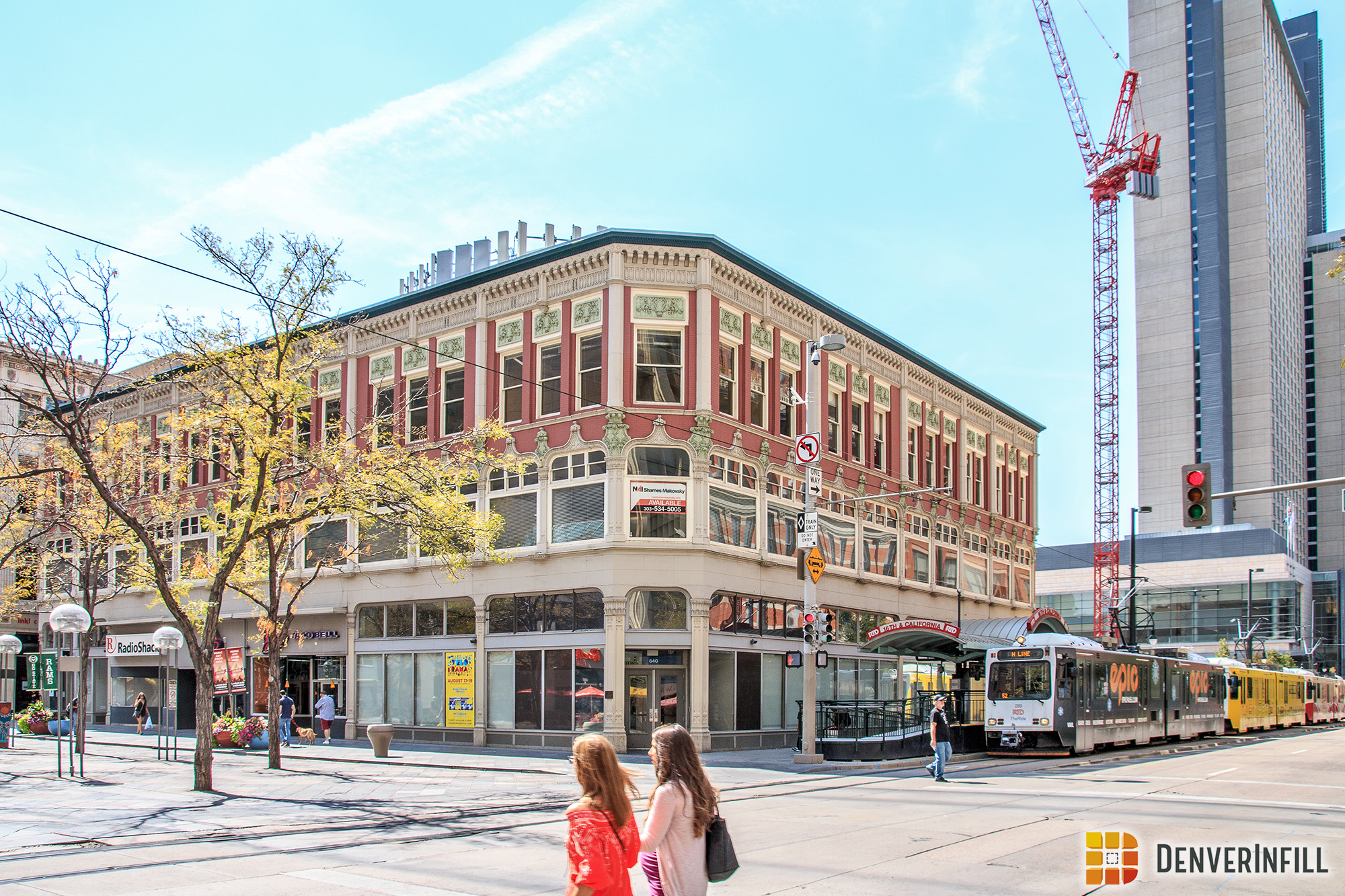 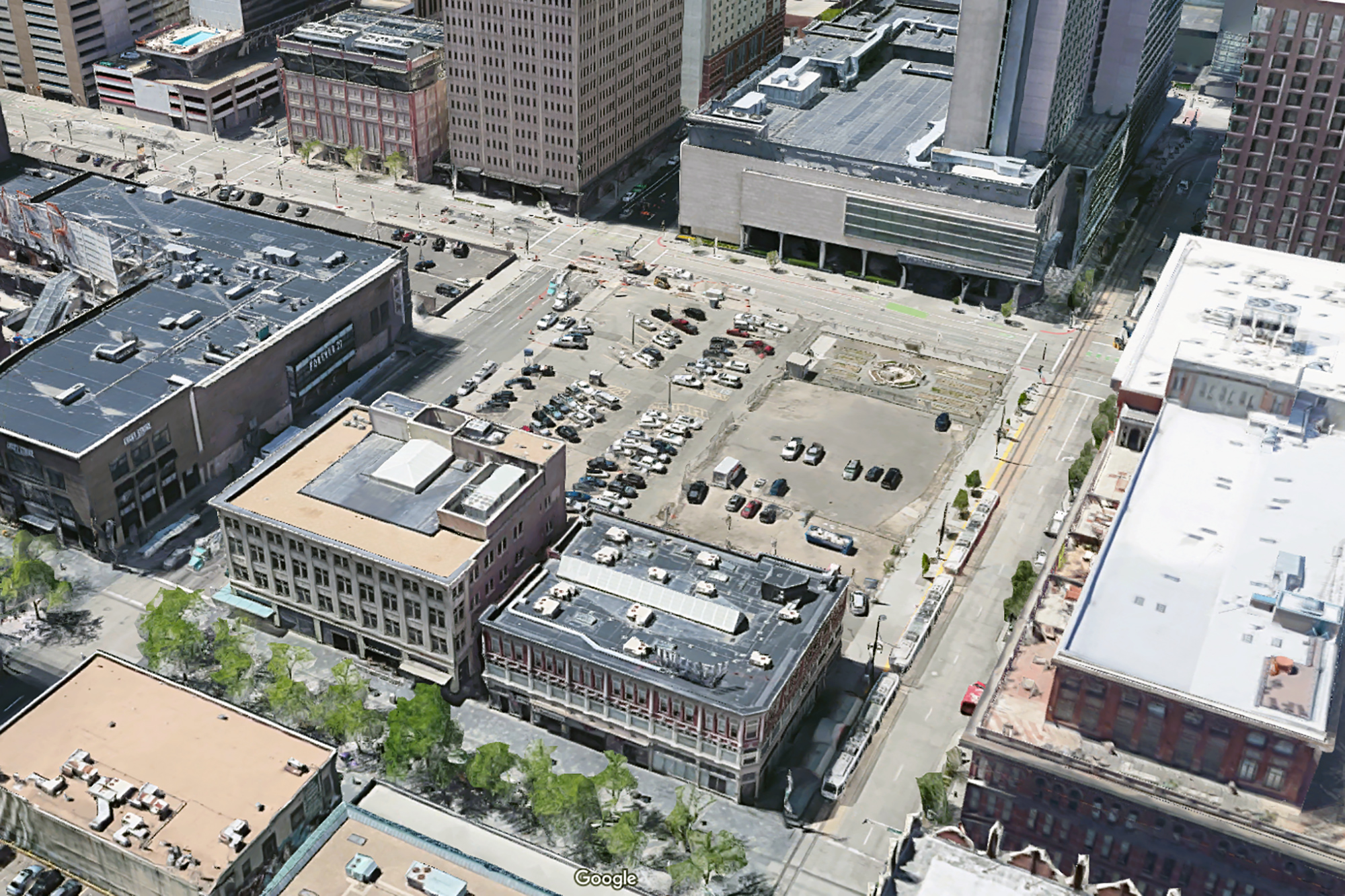 The hotel will feature a nine-story podium situated between the historic buildings fronting 16th Street and the under-construction Block 162 office tower along 15th Street. While the Sage building at 16th and Welton will remain largely untouched by the hotel project, the McClintock building will be incorporated into the new development both structurally and in use. Below is the Site Plan and the Ground Level Plan, showing the placement of the proposed hotel tower and podium on the block. Curb cuts on California and Welton would provide vehicle entry/exit and guest drop-off/pick-up to the hotel and access to three levels of underground parking. The McClintock’s interior would be reconfigured to serve as the hotel lobby and restaurant.

Note: all of the images from here on have been taken from the project’s application submitted to the LPC and available on the LPC website. The architects and creators of these images are Gensler and Anderson Hallas Architects. 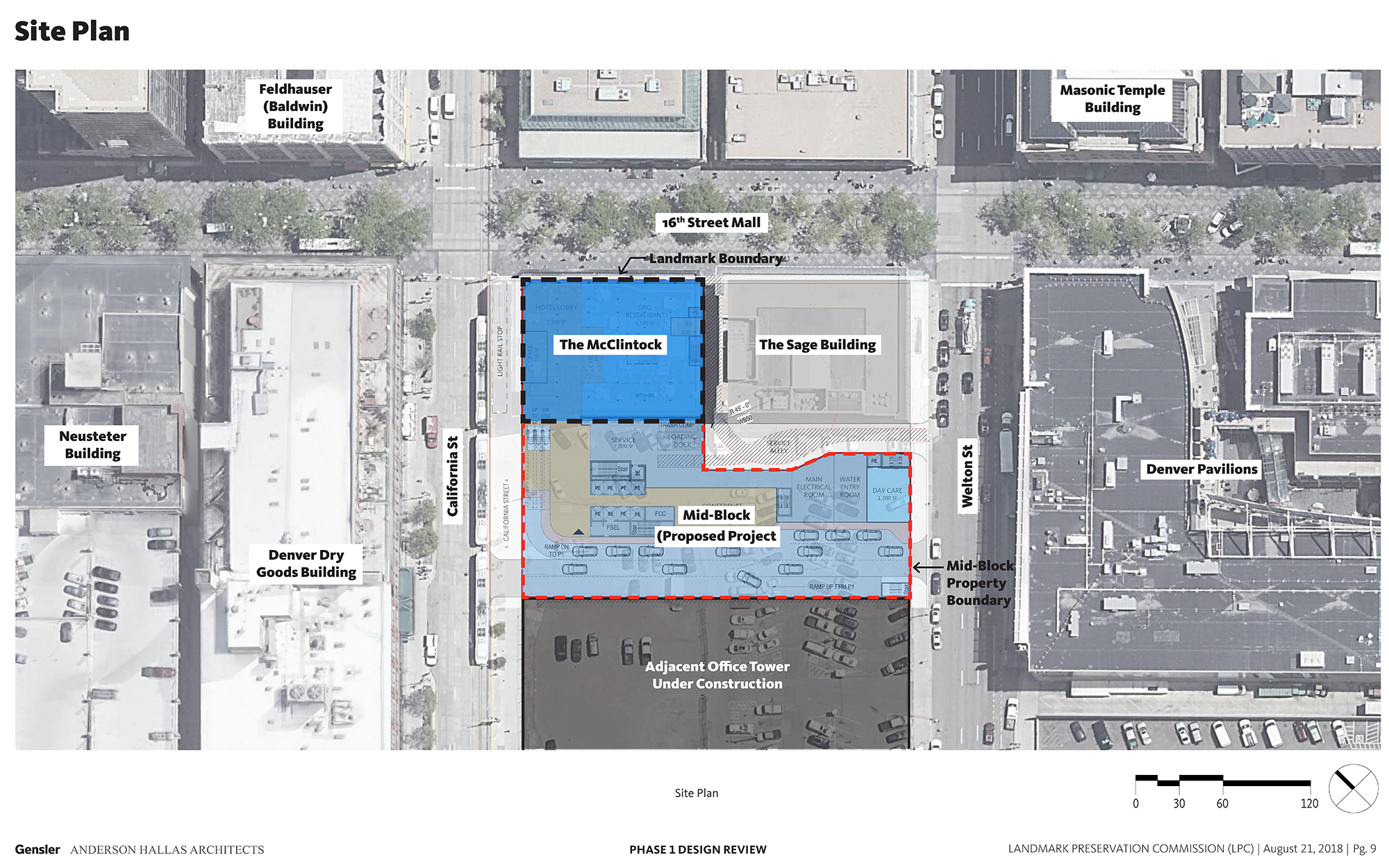 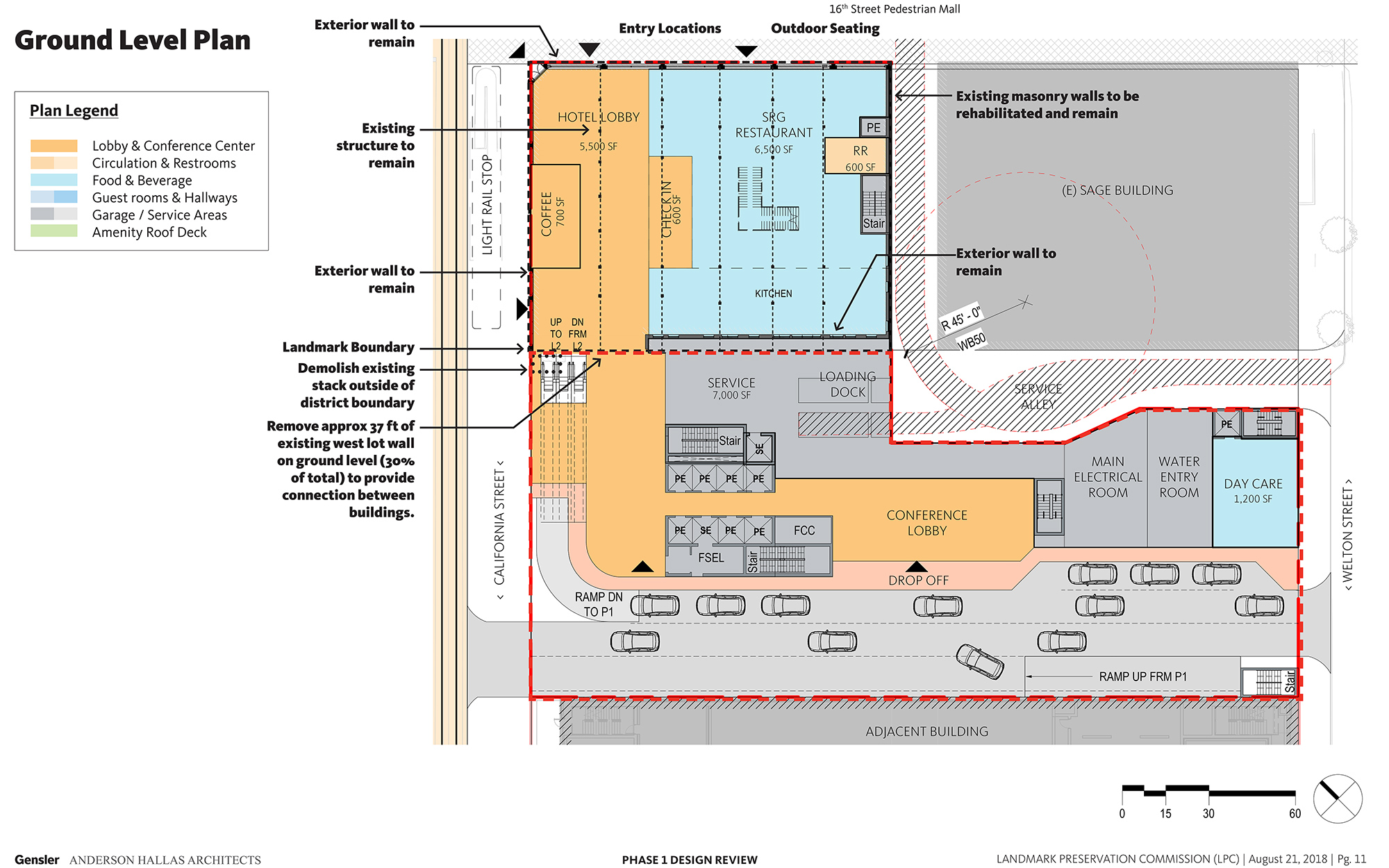 The second level of the McClintock would include dining and kitchen space with back-of-house functions in the new podium. The third (top) floor of the McClintock would provide additional amenity and administrative space, while ballrooms and pre-function space would be found in the adjacent podium structure.  Floors 4 and 5 of the podium would include additional ballroom and meeting space, while levels 6 through 8 would include a mix of hotel rooms and meeting space. The podium would be topped on the ninth level with more hotel rooms and a large outdoor terrace and rooftop bar. Levels 10 through 38 would include the remaining hotel rooms in a slender tower.

Below are three elevations (north, south, and east) that illustrate the proposed hotel’s podium and tower and their relationship to the McClintock building and the under-construction office tower. 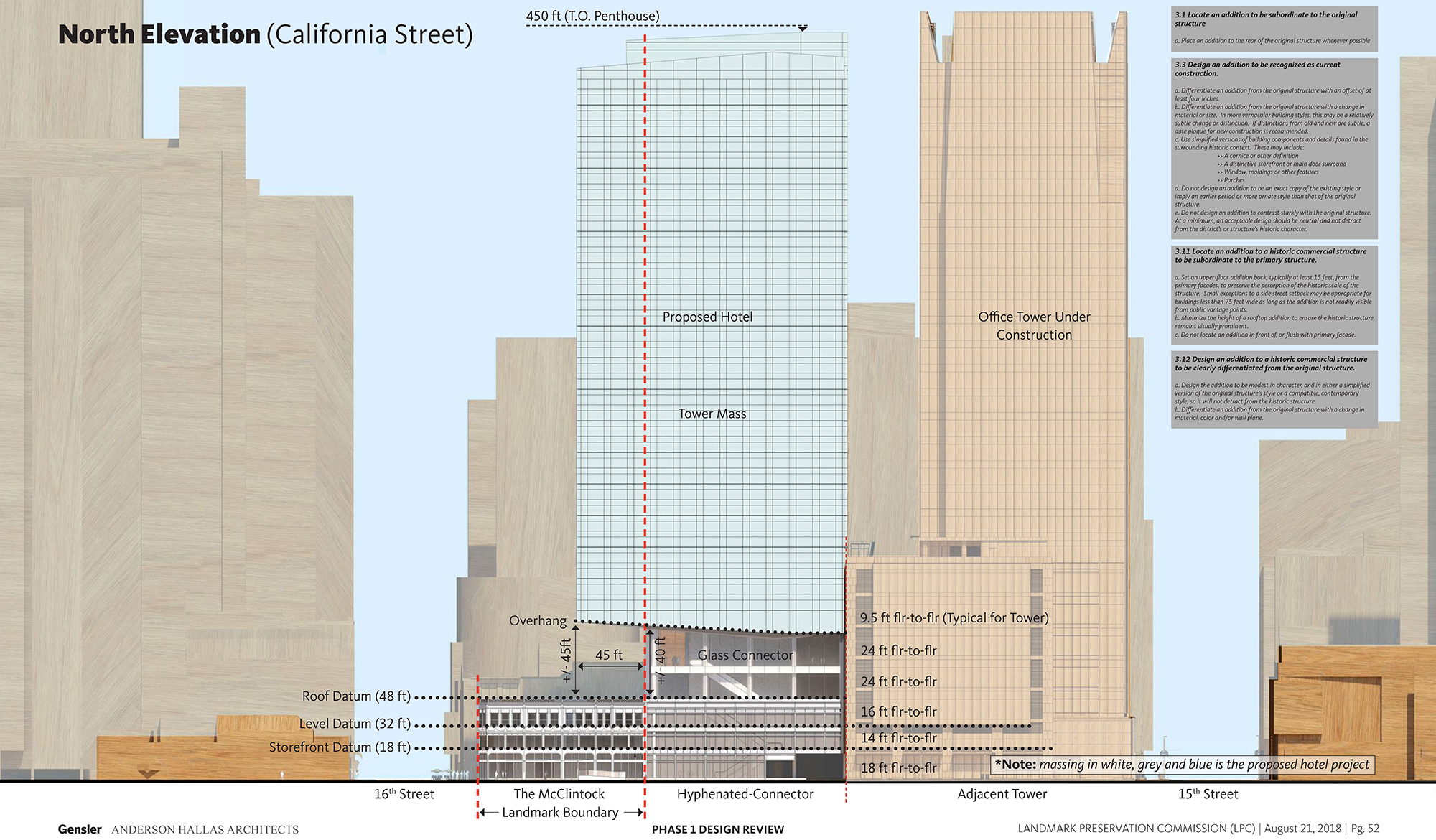 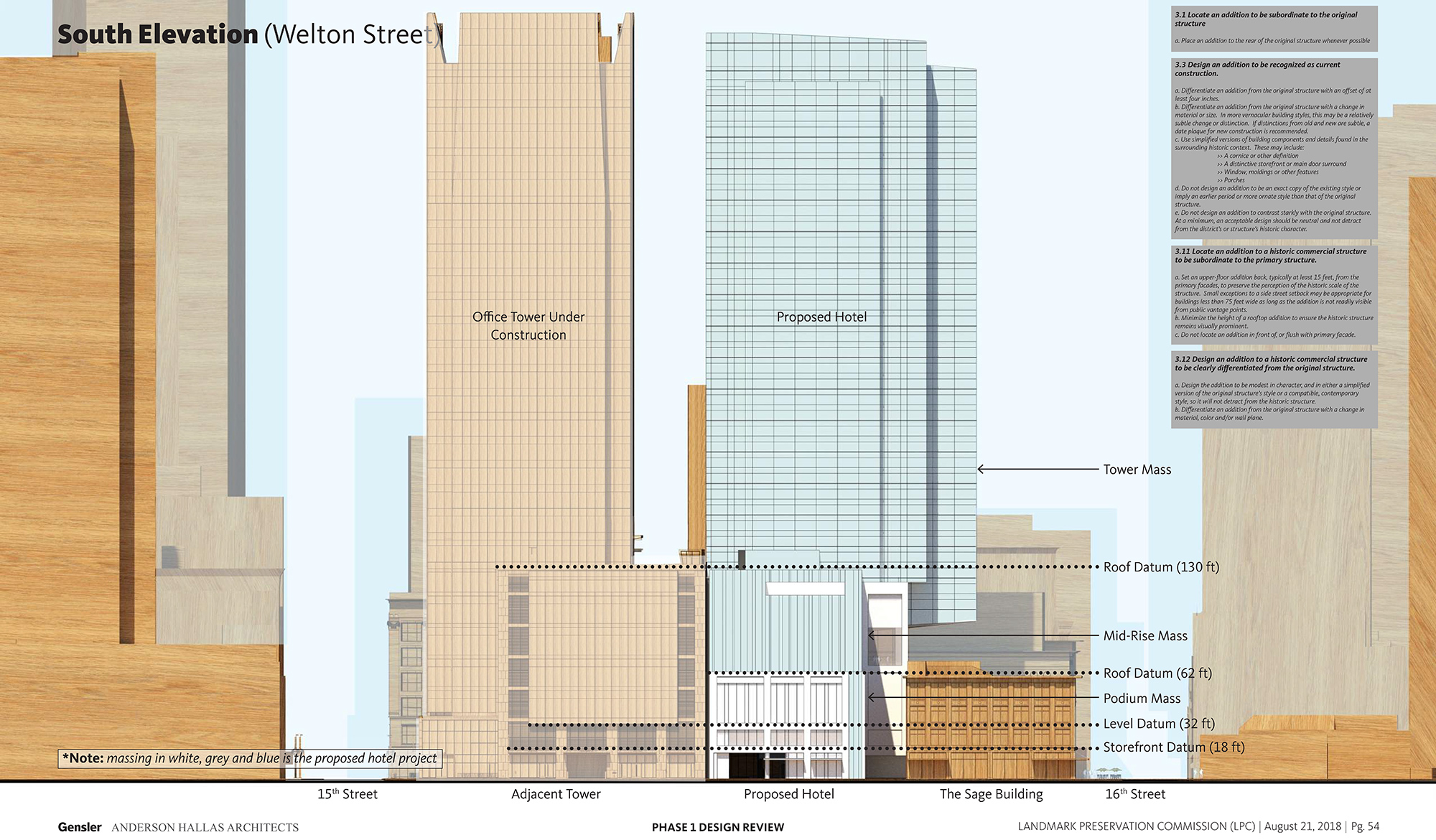 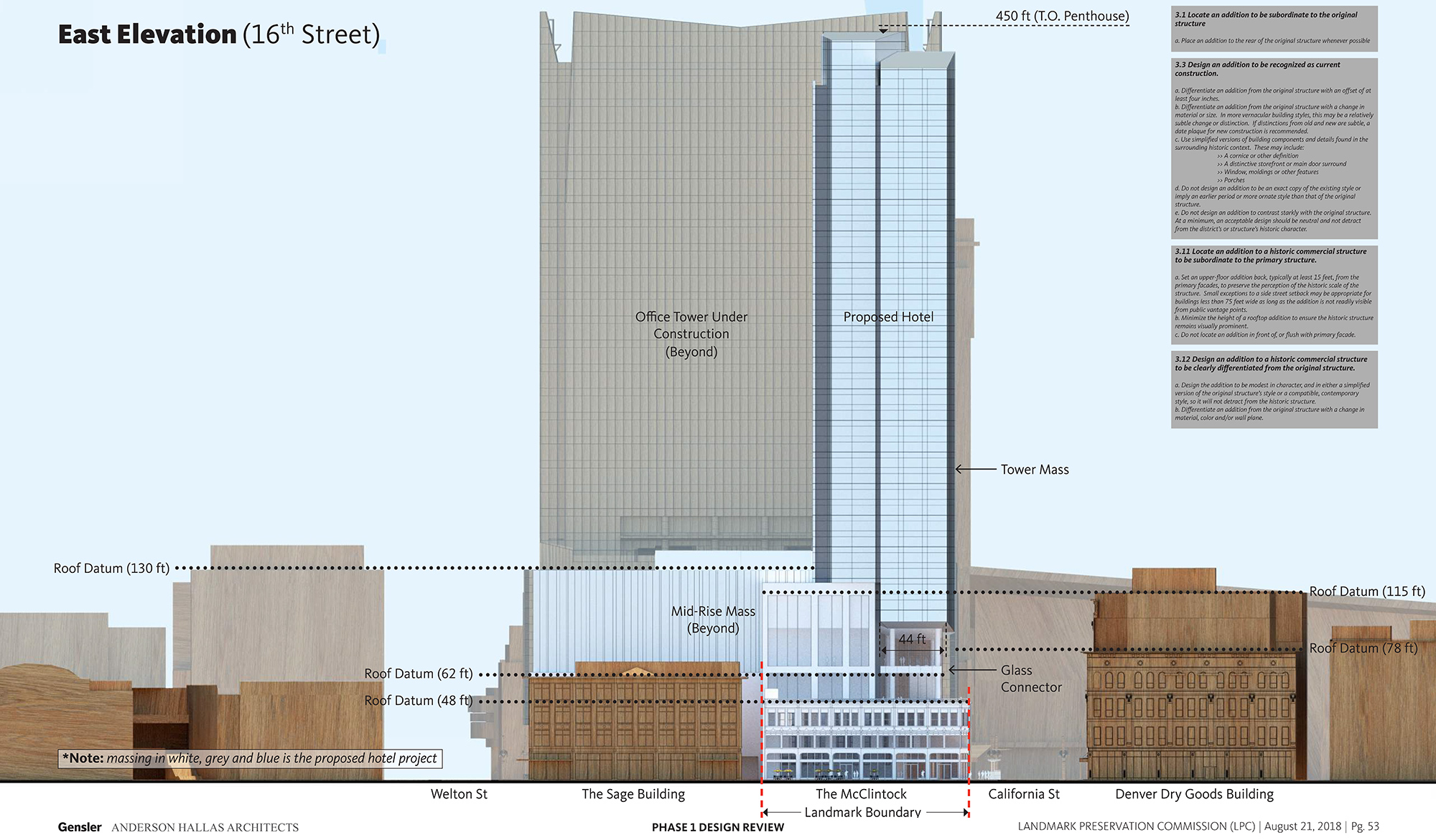 What’s interesting about the project architecturally is the way in which the podium and tower integrate with the historic McClintock building, and I’m sure this will be a topic of great interest to the LPC. The tower cantilevers slightly over the back of the McClintock to allow the historic building to remain intact while taking advantage of a portion of the air space above the McClintock to accommodate a larger and more efficient floor plate for the hotel tower.

This first set of street-level perspectives show the view from both directions on California Street: 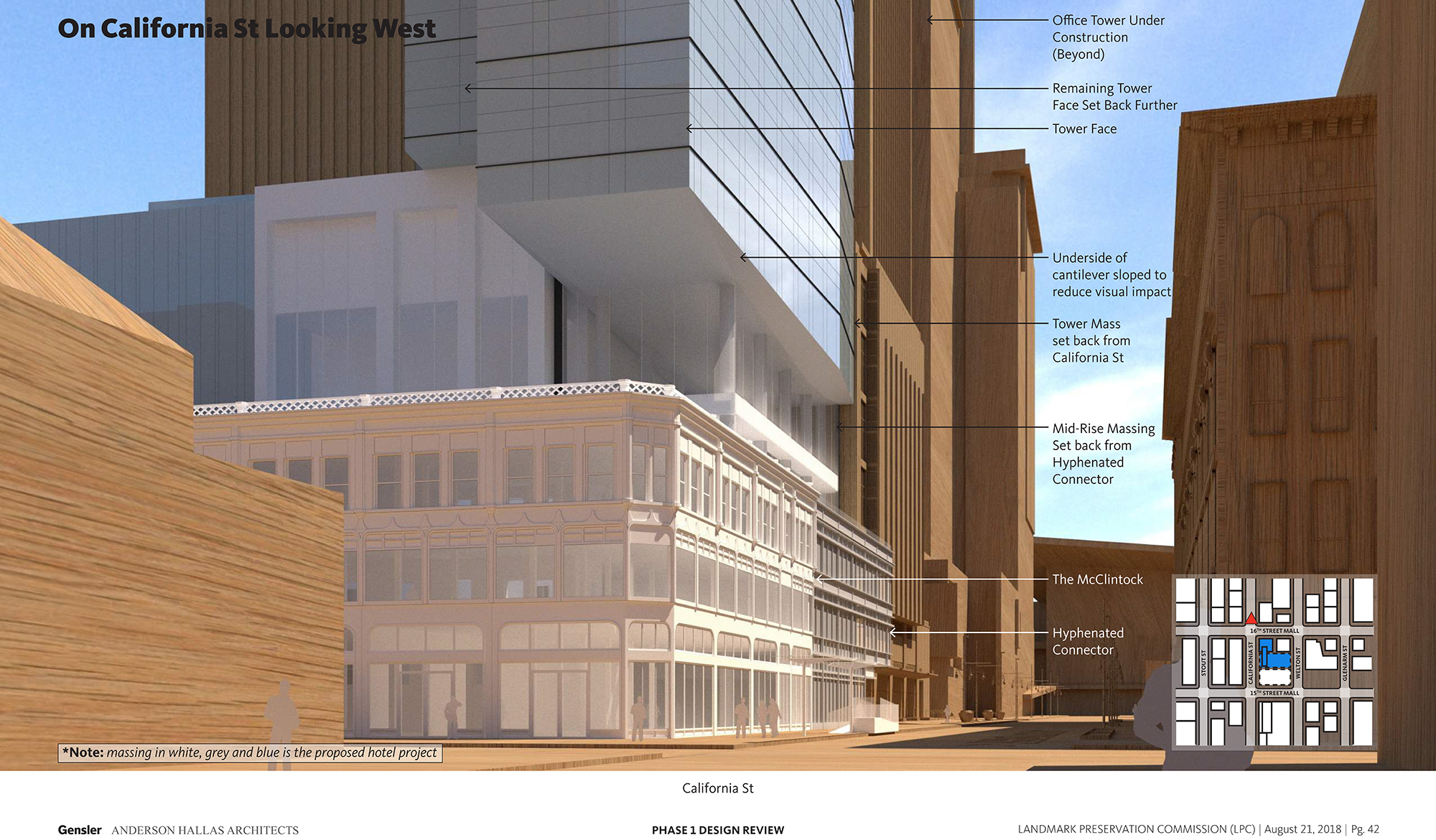 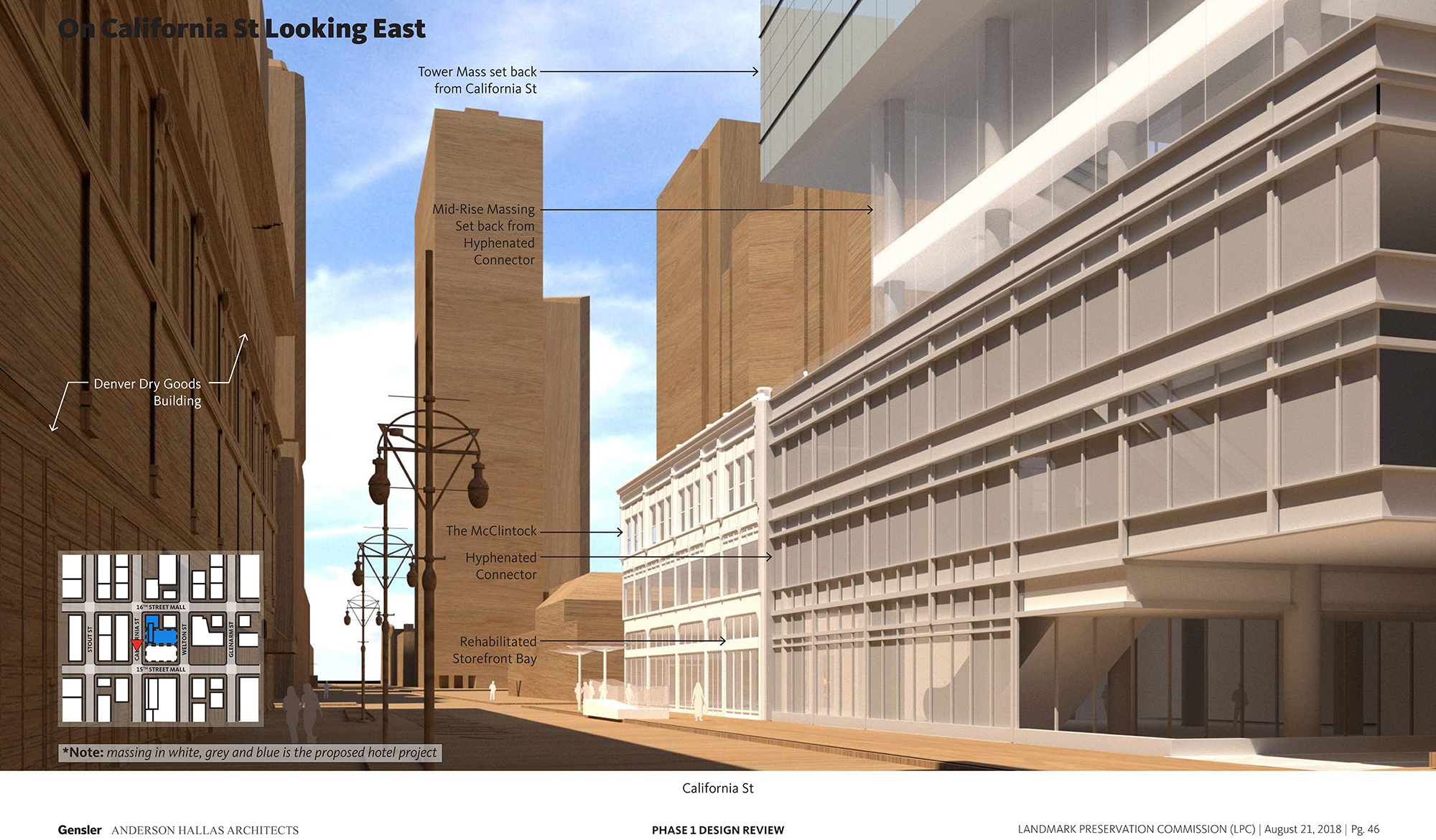 This set of street-level perspectives shows the view along 16th Street looking north: 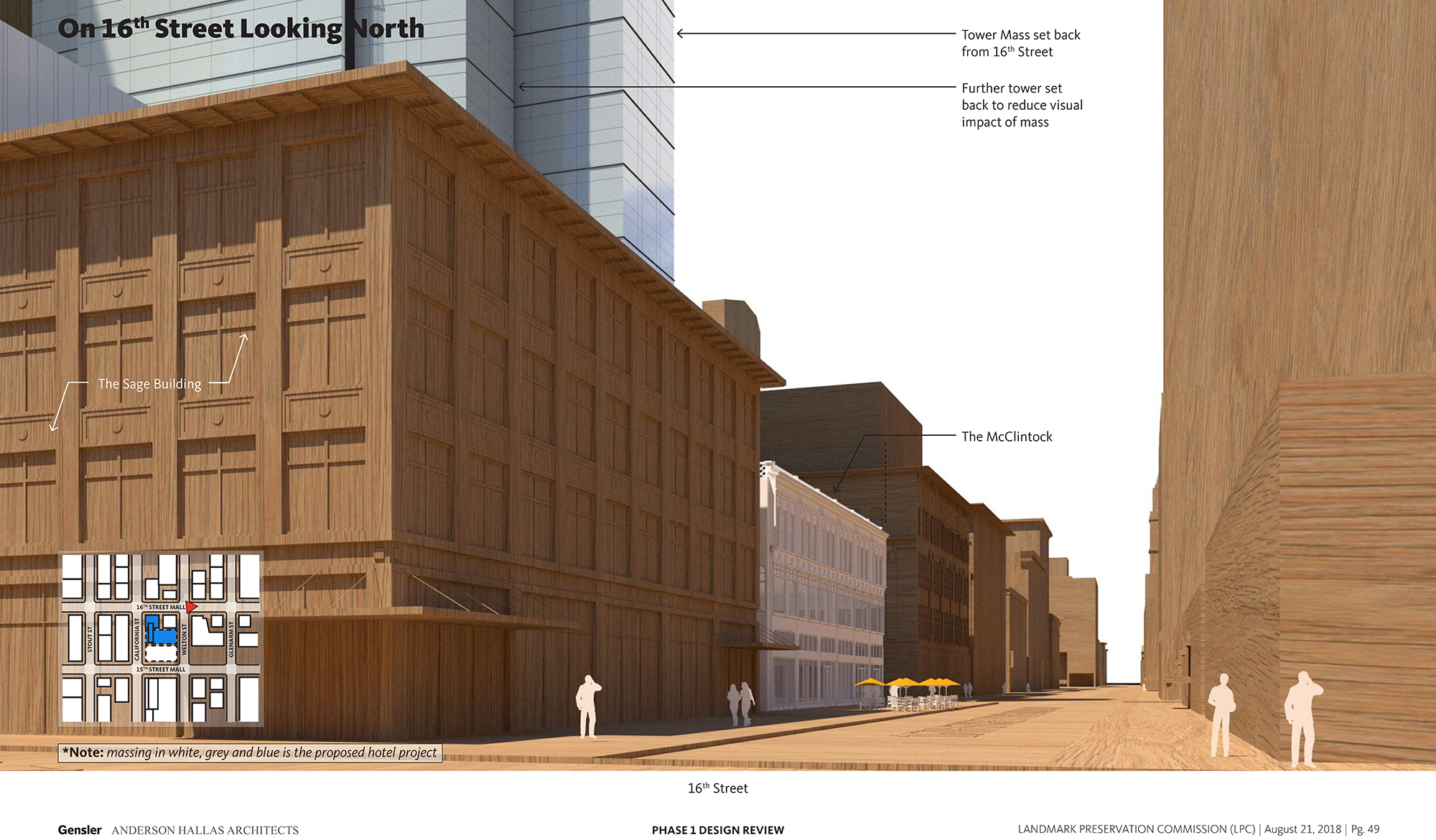 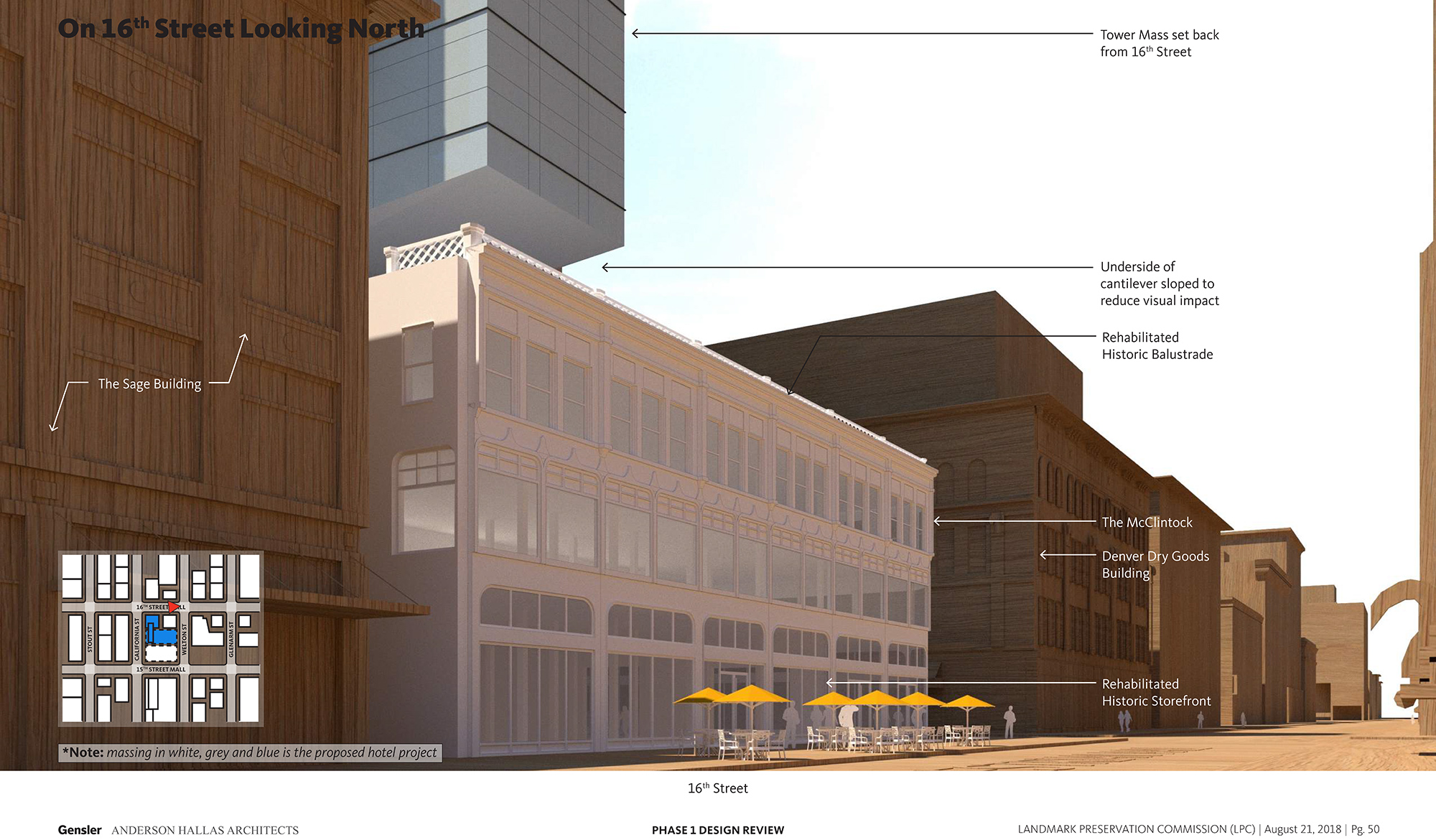 Keep in mind that this first application to the LPC is for the project’s mass, form, and context. Assuming the LPC eventually approves the project for these characteristics, subsequent reviews would then take a look at the architectural details. So in other words… this is early in the review process and design elements can and likely will change as this project moves forward.

We are looking forward to seeing what the Landmark Preservation Commission’s reaction is to this significant proposal for Downtown that incorporates both new construction and the adaptive reuse of a prominent historic structure.