I’m sure much of Kiewit’s effort to keep the job site clean and environmentally sound is governed by regulation. However, it feels like they may be going beyond simple compliance with rules.  In fact, I sense a compulsion for neatness and cleanliness. Here are some of my observations over the past couple of weeks and learning from my meeting this morning with Hunter Sydnor who is Kiewit’s Public Information Officer.

Scrap materials are sorted by type and recycled. In this picture, you can see four of the seven dumpsters containing materials headed for the recycling plant. 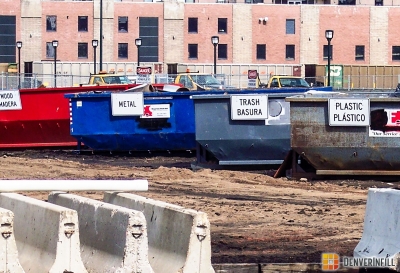 As you saw in Update #4, the granite sidewalk is being removed along 16th Street and is being stacked on pallets. Each stone has been labeled with the “address” of its place in the sidewalk. As of this morning, nearly all of the granite, along with the familiar flower pots, trash cans and benches have been staged for removal to a nearby staging area. They will be stored until that part of 16th Street is reassembled using the same granite slabs in a couple of years or so.

Controlling dust appears to be a top priority. This street sweeper runs constantly for nine hours day up and down the two remaining blocks of Chestnut Street, one block of 18th Street, and three blocks of Wewatta Street. The goal is to pick up dirt left behind by the departing dump trucks. On Friday, I was walking on 18th Street, approaching  the new Union Gateway Bridge when I saw a Kiewit employee with a broom sweeping a sidewalk where nobody walks, on a street where nobody drives. But the wind would find the dirt and blow it around the neighborhood if he hadn’t swept it. 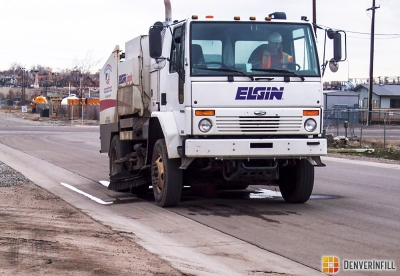 Similarly, this yellow truck sprays water on the open dirt areas of the project to keep dust from blowing. On a windy day last week, I noticed construction workers shielding theirs eyes from a passing dirt devil. The spray truck on was the spot within a minute. Even with construction at a complete standstill over the Easter weekend, the spray truck was at work each day keeping the neighborhood free of dust.

In Update #3 about water systems, I mentioned that 10 dewatering wells pump ground water into the storm sewer. Here’s a picture of the filtration tanks that ensure the water is clean before it heads for the river.

Since this is a transportation project, it is unconventional from the perspective of LEED Certification which is oriented to upright building structures. In spite of that, the Kiewit Western Construction Company is attempting to gain LEED Certification for its work at Union Station with help from its sister organization, the Kiewit Building Group (commercial buildings) which also has an office in Denver. Much of what I mentioned above is part of that effort.

I promised an answer to your questions about bad dirt. I can tell you that the dirt is contaminated with coal dust. No surprise, since the area was a rail yard for well over 100 years. I still do not know exactly what is being done with the dirt, but I will work to find out.

Finally, I’ll share my favorite cleanliness story to date. On the same windy day that I mentioned above, a worker climbed out of his front-end loader just as a piece of litter blew past his leg. The wind carried it for 30-40 feet with him in hot pursuit. He picked it up, stuffed it in his pocket, and went on his way … to lunch, I think.