Back in February 2012, Derek announced a new project that would help liven up Speer Boulevard in the Jefferson Park neighborhood. What used to be an area with a couple outdated office buildings surrounded by a sea of surface parking lots is now turning into a 325-unit 2-building apartment project that borders both the Jefferson Park and trendy Lower Highland neighborhoods.

Both buildings will rise five stories divided by Alcott Street. Due to the topography of this area, the views from these apartments will be unparalleled to anything else along this stretch of Speer Boulevard. Here is a rendering of the project to refresh your memory. 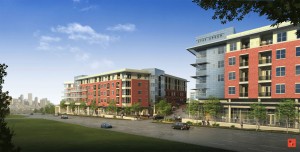 Shortly after this project was announced the buildings on site were demolished and then for over six months there was no activity on the site; just the foundations of the old buildings were intact. This project was on my worry list as it continued to sit with no activity leaving even more of an eyesore than before. However, over the past few weeks, construction activity has resumed and excavation has begun. 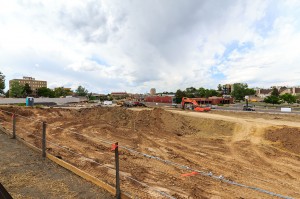 Since this project was delayed the original completion date will not be met. Assuming the time frame for construction is close to some other similar scaled infill projects, we should see this complete by late 2014. As a reminder, make sure you head on down to Union Station tomorrow morning at 9:50 AM for Ken’s great Denver Union Station tour especially if you haven’t been down there recently!