Amtrak’s return to Denver Union Station was a great event and we were able to get a great look at the new train hall canopy. In case you missed it, head on over to DenverUrbanism to check it out! In this update, we are going to revisit the canopy during the day.

Even during the day, this structure is awe striking; not to mention very large. While walking through the platforms, you will notice that  this train hall will serve both as a very functional train station and a great open public space. 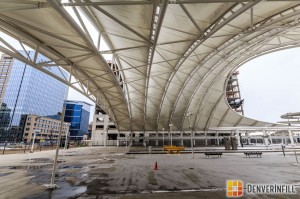 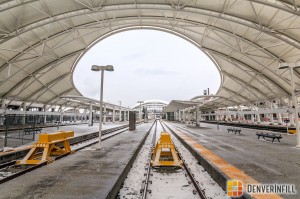 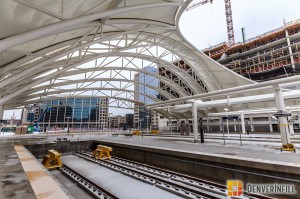 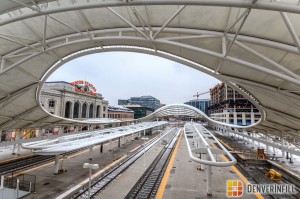 Shelter from the weather was a very popular subject when the station was under construction and, given the station is almost complete, Amtrak will have the only covered platforms. Is this a bad thing? Yes and no. When it is precipitating it would be nice to have some kind of shelter. Shelter, however, can be found everywhere. there are large areas of the train hall that are covered, including platform 1 which is reserved for the A-Line to Denver International Airport. You can also seek shelter under Amtrak’s platform 3, which is a central point between all of the other platforms, inside the historic structure and down in the underground bus facility. I was more concerned about the ice that was under all of the platforms. Because of the brand new concrete, ice melt cannot be used yet. Fear not, I was assured by a Denver Transit Partners supervisor that this will not be a problem next winter. 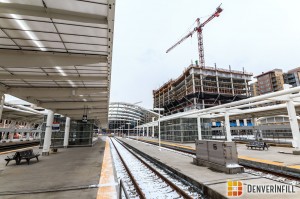 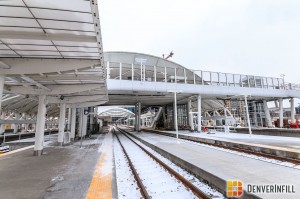 Here are two additional pictures of the station: The covered walkway to the historic station, and the 18th Street pedestrian bridge. The metal fence over the tracks on the pedestrian bridge looks sharp and will still be able to provide a great view to watch trains go to and from the station! 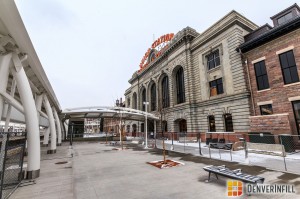 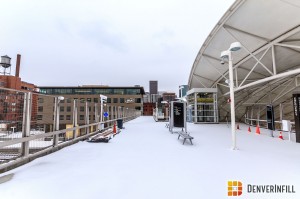 Last but not least, here is an example of the signage that will be used throughout the station. It is very straight forward with different icons and colors depending on the mode of transportation you are taking. 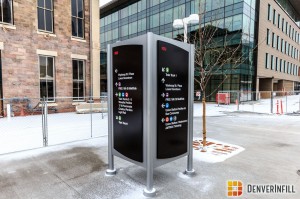 This will be the last time we visit Denver Union Station’s train hall canopy until its grand opening on May 9th. We will see you then!