The original DenverInfill website included Downtown-area infill projects planned or built between January 1, 2000 and December 31, 2009—one complete decade. Since the start of 2010, all infill project-tracking and reporting duties have been handled exclusively here on the DenverInfill Blog (launched on July 5, 2005). With 2014 over, that means we now have fifteen years’ worth of projects we’ve been covering at DenverInfill!

To celebrate this milestone, I decided to prepare a graphic showing the footprint of all (or mostly all) of the infill projects in the Downtown Denver area that were completed between January 1, 2000 and December 31, 2014 or are currently under construction. Click on the image below to view at full size, or click here for a huge version in PDF format. 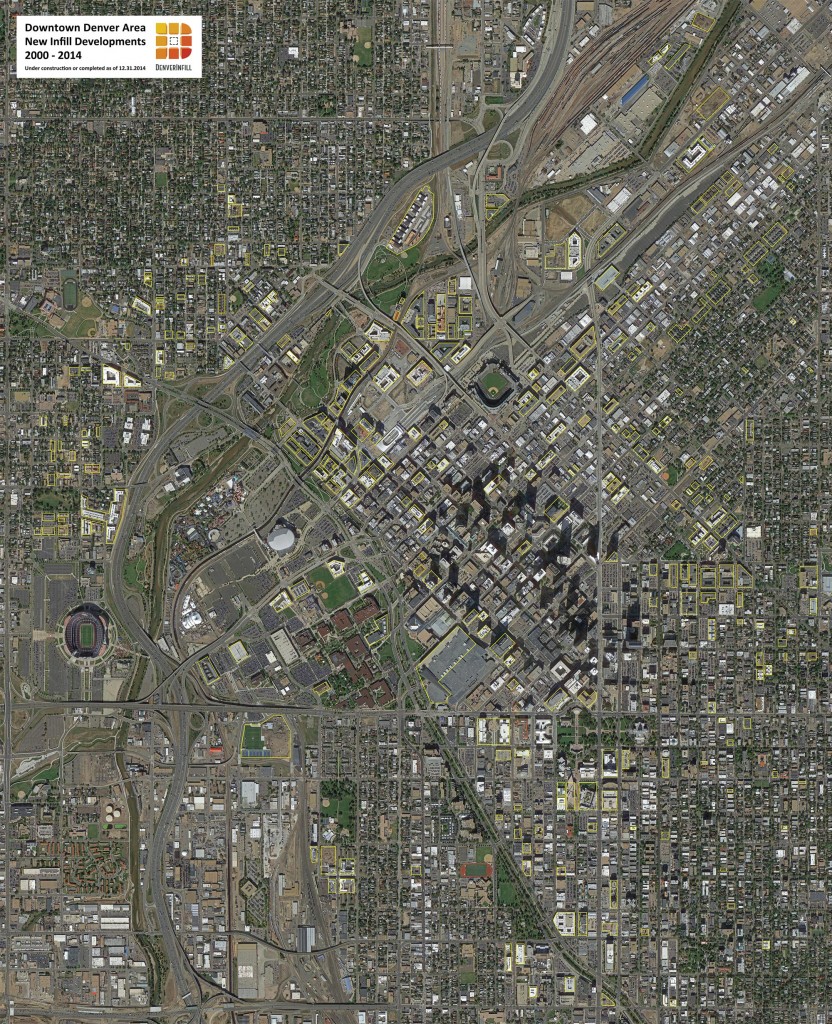 A few notes about the image: The boundaries are Federal Boulevard on the west, Downing Street on the east, and 6th Avenue on the south. To the north, it goes just far enough to pick up the River North district below 38th Street. Proposed projects are not shown, nor are any adaptive reuse or historic preservation projects. Also, there are dozens of townhome projects that are not shown. I’ve included a few, but there are so many of these smaller (say, under twenty units or so) townhome projects being built in the downtown fringe areas that to attempt to capture them all was simply beyond the scope of this effort. This graphic is meant to be fun and interesting to look at and offers a broad 30,000-foot view (actually, 13,000-foot view according to Google Earth) of the magnitude of infill development in the Downtown Denver area in the past fifteen years. If I missed a few projects, don’t sweat it. This wasn’t meant to be a complete and accurate survey.

What I want you to take from this graphic is how far we have come as a community in repairing the urban fabric of our city center. One hundred years ago, a vacant or undeveloped parcel was a very rare thing in the Downtown area, and there were absolutely no surface parking lots. Downtown Denver in 1915 had a virtually complete urban fabric: blocks of buildings defined and separated by streets, streets defined and framed by blocks of buildings—the quintessential urban form of cities for millennia. This urban fabric was nearly decimated in the post-War era due to a combination of short-term land speculation, ill-conceived urban renewal programs, and a society obsessed with making it as easy and convenient as possible for everyone to drive their personal automobile anywhere at any time.

These infill projects represent our efforts to, essentially, restore the urban form of Downtown Denver of 1915. There are minor differences between the 1915 urban form and what we’re building in 2015 (today, mostly taller buildings and larger building footprints), but the basic form is the same: buildings that touch the property line, have (hopefully) good sidewalk appeal, and frame the street as a public space. A building’s urban form, street frontage, and spatial relationship to its neighbors, is more important to the overall vitality and success of an urban area than what the building “looks like” architecturally. That’s why our emphasis here at DenverInfill has always been about rebuilding central Denver’s urban fabric through infill development to create great streets and public spaces that bring people together and make them glad they’re in the Mile High City.