If you’ve been to The Source on Brighton Boulevard in Denver’s booming River North district—and I bet that includes the vast majority of Denver by now—then you know that there’s a large vacant parcel next door that handles most of the parking duties for the popular culinary marketplace crafted out of an abandoned 1880s iron foundry. The project’s next phase will extend the concept and footprint of The Source onto that vacant lot through ground-up construction of a new hotel, market hall, and parking garage. 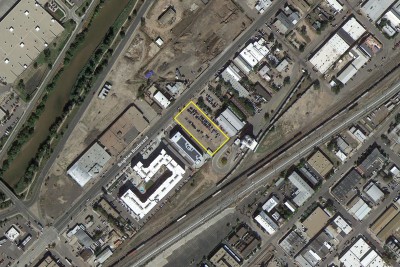 Zeppelin Development announced the next phase of The Source a few months ago and most of the media attention focused on the hotel component. At that time you may have seen this rendering, courtesy of Zeppelin Development and Dynia Architects, of the hotel’s progressive design that blends a bit of RiNo’s industrial aesthetic with Zeppelin’s love of quirky geometry: 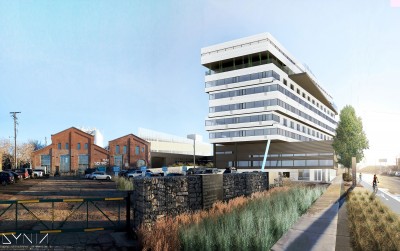 The Source Hotel’s eight levels will feature 100 guest rooms, a 2,000-square foot New Belgium micro brewery on the ground floor, and a top-floor beer garden, pool, and restaurant. Many of the rooms will have operable glass garage door windows, which has become a signature Zeppelin design element: 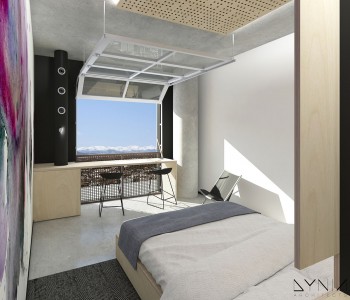 What didn’t receive as much attention when the project was announced was the rest of the development—the new market hall and the 300-space parking garage and how they fit together with the hotel onto the site. That is the focus of this post.

First, let’s get you oriented with the latest site plan (thanks to Zeppelin’s Justin Croft) that shows the new hotel tower along Brighton Boulevard, the new market hall in the center of the site, and the parking garage located in the back of the lot. 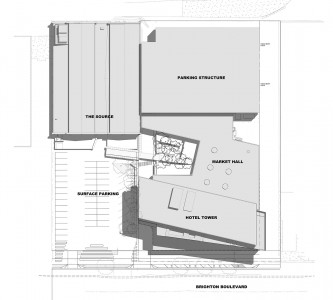 The new market hall will cover approximately 19,000 square feet and will feature up to 12 restaurant and retail spaces surrounding a large common area that will have an expansive natural light-filled environment similar to the historic Source next door.

The C-shaped market hall will feature glass garage doors (of course!) that open onto terraces to create an indoor/outdoor experience and additional restaurant seating that overlooks a native landscaped courtyard.

A key design feature of the project is the sculptural pedestrian bridge that passes over the native landscaping to connect the new phase with the original Source building. Besides its aesthetic value, the landscaped areas below the bridge will also serve as the storm water detention and water quality areas for the development. Here is a new rendering showing how the new market hall relates to the hotel and parking garage and connects via the bridge to its older sibling: 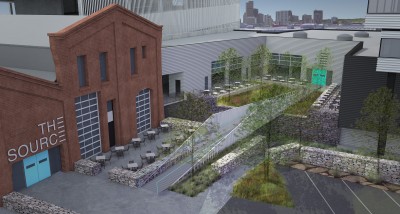 The new Source hotel and expanded market hall will be able to take advantage of the many new infrastructure investments coming soon to RiNo, including a completely rebuilt Brighton Boulevard with sidewalks and cycle tracks, a new ped bridge over the railroad tracks and new River North park (with ped bridge over the South Platte) just a block over near 35th Street, and the new 38th & Blake transit station just four blocks away. Wow!

The expansion at The Source should be complete by 2017.