Yesterday we published our December 2015 Multi-Family Residential Projects update for Downtown Denver, now let’s take a look at the scope of non-residential development, i.e. office, hotel, and civic/institutional uses, over the past six months. Like our residential analysis, we use a 1.5-mile radius of the historic D&F clock tower at 16th and Arapahoe as our Downtown survey area. Use this link to view our June 2015 Non-Residential Projects Update post. 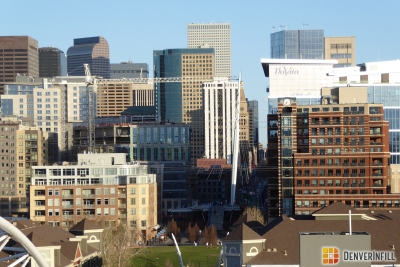 Click on the image below to view in full size our December 2015 Downtown Denver Non-Residential Projects exhibit or use this link (Downtown-Denver-Non-Residential-Projects-Summary-December-2015) to view/download a high-resolution PDF version (6 MB) formatted for printing at 11″ x 17″. 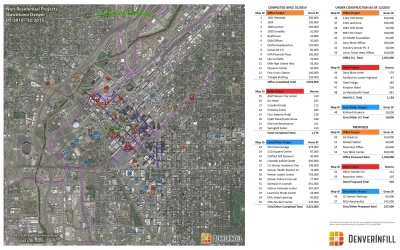 Office: Since our June 2015 summary, two office buildings, 1601 Wewatta and the Triangle Building, have been completed, bringing the total square footage of office space completed in our survey area since the start of the decade to nearly two million square feet (1,933,000). The amount of new office space currently under construction is 1,453,000 square feet, a decrease since June due mostly to the completion of the aforementioned projects, but two new office developments are new to the Under Construction list: 999 17th Street and the Colorado Health Foundation headquarters. Regarding 999 17th Street, as we mentioned in our post on the project a few weeks ago, preliminary site work is underway but a formal project announcement has not yet been made; however, for the purposes of this summary, we are categorizing the project as being under construction. Proposed new office space has stayed largely the same at a little over 1 million square feet (1,180,000) but with one notable difference: since June, East West Partners announced an anchor tenant (DaVita) for their 16 Chestnut project allowing that project to definitively move forward in 2016. One major new office tower is in the pipeline… more on that soon.

Hotel: Downtown Denver’s hotel market continues to thrive. Since June, an additional 346 rooms were completed (Hyatt Place/Hyatt House) bringing the total number of new hotel rooms added to the Downtown market since the start of the decade to 1,776. The number of hotel rooms under construction increased since June to 1,128. While the Hyatt project moved to the completed column, a new hotel development with more rooms, the Le Meridien/AC Hotel, started construction. The list of proposed hotel projects has now been narrowed down to two totaling 319 rooms. Several new hotels, however, are in the pipeline. More on those projects in early 2016.

Civic/Other: In the Civic/Other category, which includes cultural, educational, and other institutional projects, the numbers have mostly stayed the same since our June update. No new projects were added to the Proposed category and one small but important project, the Kirkland Museum, started construction. Overall since the start of the decade, 3,521,000 square feet of Civic/Other projects have been completed.

That’s it for our December 2015 recap. For similar assessments that use a slightly different geographic approach, please check out the excellent development summary reports at the Downtown Denver Partnership. Our next comprehensive update will be in June 2016.