It’s time for our six-month update of development activity in the Downtown Denver area, presented in two parts: this post focuses on multifamily residential and the next post will look at non-residential projects. You can read our last multifamily residential update from June 2015 here. As before, this analysis covers the area within a 1.5-mile radius of the D&F clock tower at the corner of 16th and Arapahoe, a suitable reference for the geographic center of the Downtown Denver area. For similar assessments that use a slightly different geographic approach, please review the excellent development summary reports at the Downtown Denver Partnership. 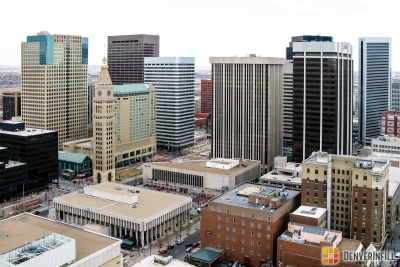 From the start of the decade through the end of 2015, a total of 7,749 multifamily residential units have been completed within our 1.5-mile radius survey area, an increase of 1,476 units since our June 2015 report. An additional 5,039 units are currently under construction, about 500 more than the 4,556 units that were in progress six months ago. Another 2,109 units are currently proposed (projects with sufficient available data that have been profiled on DenverInfill) and about 4,000 more units are in the pipeline (i.e., projects at various stages from “rumored” to “under preliminary review with the city”)—slightly higher than the 1,507-proposed/4,000-pipeline units we reported in June. So in other words, it would appear that the Downtown Denver residential boom has slightly expanded in the past six months.

Click on the image below to view in full size our December 2015 Downtown Denver Multifamily Residential Projects exhibit, or use this link (Downtown-Denver-Residential-Projects-Summary-December-2015) to view/download a high-resolution PDF version (6 MB) formatted for printing at 11″ x 17″.

Assuming all of the units currently under construction are completed and, using some educated guesses for the number of units likely to be completed annually barring a major economic downturn, we’re estimating approximately 17,000 units will have been built within the 1.5-mile radius by the time the decade ends in December 2019. By comparison, about 10,500 multi-family residential units were built within a slightly larger area during the Aughts from 2000-2009, according to the original DenverInfill website.

(Please note: we’ve recently stopped tracking new townhome projects because, frankly, there are so many of them going up in the Downtown periphery that it is just too time consuming trying to track and report on all of them. So, while our exhibit above does include a few townhome projects, there are hundreds of townhome units under construction and proposed that are not included in our analysis and won’t be in the future.)

What should we expect for multifamily housing development in Downtown Denver in 2016? Mostly likely, more of the same steady growth we’ve seen since 2012. Some of the factors to consider are job growth, population growth, vacancy rates, and the possible effects of construction defects reform.

Denver’s unemployment rate is currently a very low 3.2% and job growth in 2015 has been robust and stronger than first reported. Downtown Denver has also been very successful in growing companies and luring firms relocating from the suburbs or from out of state. Apartment vacancy rates are starting to rise, and with several thousand new units to be added to Downtown’s apartment inventory in the coming months, the vacancy rate may rise to the point of discouraging new developments from moving forward. However, higher vacancy rates could eventually cause some downward pressure on rents, making urban living a bit more attainable for many who are currently priced out of the Downtown market.

And then there’s population growth. Recently, the Census bureau estimated that Colorado’s population increased by about 101,000 people from July 2014 to July 2015, the largest annual numeric gain since 2001. While July 2015 estimates for counties won’t be available until March 2016, we can look back at last year’s numbers for some insight. The Census Bureau estimated that Colorado’s population increased by over 84,000 from July 2013 to July 2014 and during that same time period Denver County’s population increased by over 15,000—or approximately 18% of the state’s total gain. If we assume Denver again captures 18% of statewide population growth, that would mean an increase of around 18,000 in Denver’s population from 2014-2015 and, using Denver’s persons per household average of 2.27, about 8,000 additional housing units would be needed to accommodate that annual increase. How many of those go to Downtown?

In November, the Denver City Council approved a comprehensive construction defects ordinance in hopes of reducing the legal/financial barriers that have held construction of for-sale condominium developments to virtually zero. No one expects the city’s action to immediately unleash a wave of condo construction, but it certainly could begin to thaw multifamily for-sale housing starts over the next few years. Hopefully, the state legislature will finally take action on this issue in the 2016 session.

Anyway, that’s our six-month overview of Downtown Denver’s housing boom. We’ll do our next update in June 2016. Don’t forget, to learn more about the individual projects listed in the exhibit, check out our DenverInfill Project Map available by clicking on the photo link on the right sidebar.