Every June and December, we provide a summary of development activity within the Downtown Denver area. This time around we will cover this in four parts: residential projects today, non-residential projects (i.e. office, hotel, and civic/other) on Thursday, our 3D Future Skyline feature on Friday, and we’ll wrap things up with a Tower Crane Census on Saturday! For our previous summaries, please look under the Special Features menu above.

As before, our analysis covers the area within a 1.50-mile radius of the historic D&F tower at the corner of 16th and Arapahoe, a suitable landmark for the geographic center of Downtown Denver. We use a 1.50-mile radius because it does a good job of covering the downtown core area plus some of the closer-in parts of the downtown-edge districts like Uptown, Five Points, River North, and Lower Highland. Our semi-annual DenverInfill development summaries are a nice complement to the Downtown Denver Partnership’s development reports, which use the DDP’s official downtown and center city neighborhoods boundaries rather than a distance-radius approach.

OK, on to the multifamily residential summary! To view/download a high-resolution PDF of the exhibit below, click here. 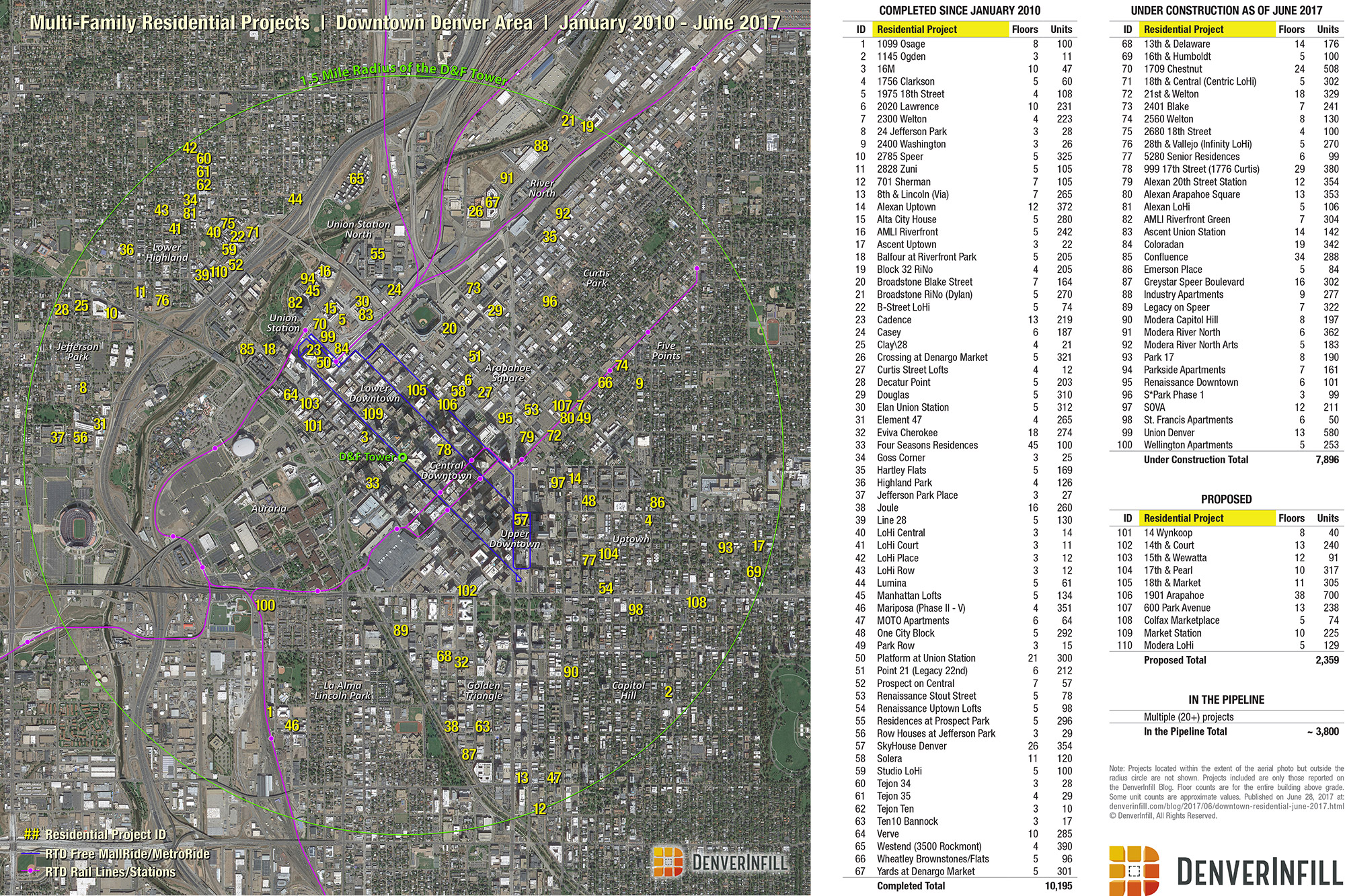 In the six months since our last update in December 2016, a total of 1,118 multifamily residential units have been completed in our 1.50-mile radius Downtown Denver survey area, bringing the total residential units completed since the start of the decade to 10,195. The two largest projects to open in the past six months are the 12-story, 372-unit Alexan Uptown and the 18-story, 274-unit Eviva Cherokee.

Adding over 10,000 residential units in Downtown Denver since the start of the decade is quite impressive. But it’s even more remarkable if you consider that only 868 units were completed in all of 2010, 2011, and 2012; those early years of the decade still being affected by the tail end of the great recession. That means 9,327 units have been completed just in the last four and a half years, since the start of 2013. That’s pretty amazing, and a testament to not only the population growth in Denver (over 93,000 residents added in the city proper since 2010), but the broad appeal of Downtown Denver as a desirable place to live.

In our December 2016 update, we reported that there were a record 6,374 units under construction in our downtown survey area. Now the number of residential units currently under construction is up to 7,896. But this shouldn’t come as a surprise, given the forest of tower cranes covering Denver’s urban core. Assuming all of these projects under construction are completed before the end of the decade (a good bet—only the newest of these projects have completion dates stretching into 2019), then Downtown Denver will gain at least 18,091 residential units in this decade.

The number of residential units in our Proposed category, 2,359, is about the same as six months ago, although the projects contributing to that total have changed. Five big projects (21st & Welton, Ascent Union Station, Greystar Speer Boulevard, 13th & Speer, and SOVA) left the Proposed category by recently breaking ground. Taking their place are several apartment developments, like 17th & Pearl, 600 Park Avenue, and Modera LoHi, and one big condominium project, the 700-unit 1901 Arapahoe.

Speaking of condominiums, the consensus seems to be that the rental apartment market is nearing (or is already at) its peak for now. The number of new rental developments in the pipeline has decreased compared to the past several years. But the condo market, absent from this current boom due to the construction defects issue, is poised for a huge surge. There appears to be no lack of demand, and for-sale housing options would offer great opportunities to provide desperately needed affordable housing.

Thanks to the one-two combination of the state legislature’s recent passage of construction defects reform and the Colorado Supreme Court’s recent Vallagio decision, we should be looking at “Downtown Residential Boom 2.0” over the next five years. Just as the apartment market takes a needed breather, the condo market emerges to replace dozens more surface parking lots (you know, those soul-sucking black holes in the urban fabric) with mid-rise and high-rise condo towers. Outside of downtown, the opportunities for neighborhood-scale condominium development seems equally intense. Perhaps in our DenverInfill June 2023 Residential Summary post, we’ll report on the 10,000 new condominium units completed since 2018. The 2007 Downtown Area Plan calls for the addition of 18,000 new housing units by 2027. That goal will be easily met. How about we go for 30,000?

Now that the barriers to condominium development have been removed, the city must figure out a way to ensure that a healthy majority of the thousands of condominium units to be developed in the coming years are attainable to the full spectrum of Denver residents. “Luxury” should be a niche in the condo market, not the condo market, like it has been for apartments.