Yesterday we took a look at the status of residential development in the Downtown Denver area, today we focus on non-residential projects (i.e. office, hotel, and civic/other). For our previous semi-annual summaries, please check out our Special Features menu above, and for information about our methodology, please visit our About the Development Summaries page.

Here’s our non-residential projects summary map and table for January 2010 – June 2017. For a high-resolution PDF of this exhibit, click here. 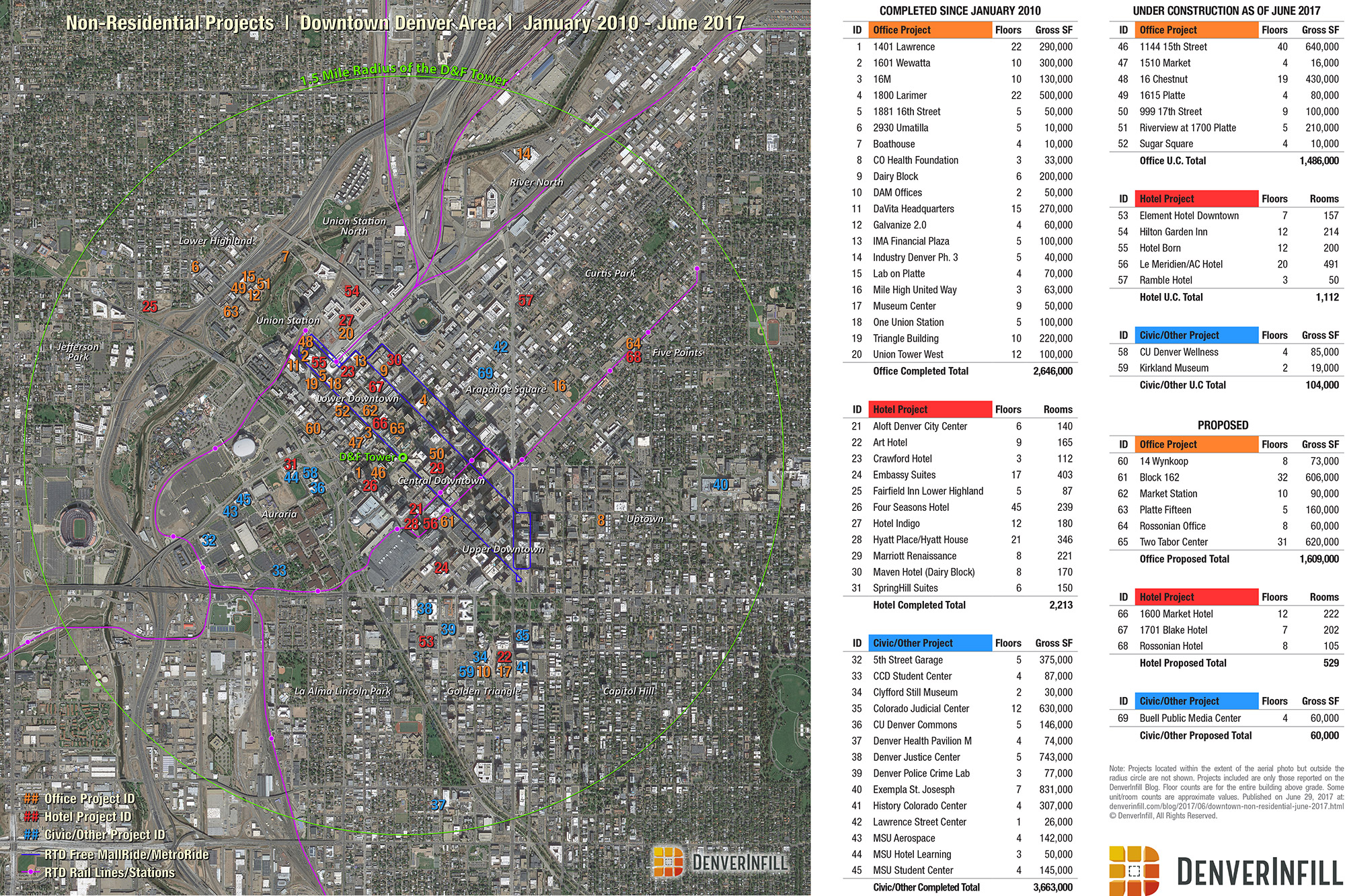 Office: Three buildings finished construction since our December 2016 update (Dairy Block, 1881 16th Street, Union Tower West), bringing the amount of new office space completed since 2010 in Downtown Denver to about 2.65 million square feet. The only office building to break ground in the past six months is SugarSquare, the small 10,000 SF infill addition to the historic Sugar Building.

In the Proposed column, no new projects were added since December, indicating that developers are likely waiting for additional absorption to occur, given the square footage currently in the works. However, of the projects remaining in the Proposed category, two are very likely to break ground before our next update at the end of the year: Market Station and Platte Fifteen, which would add another 250,000 square feet to the Under Construction total.

Hotel: Two hotels (Hotel Indigo and the Maven Hotel) wrapped up construction and opened in the past six months, both hotels being part of the mixed-use office developments (Dairy Block and Union Tower West) mentioned above. These bring the total number of new hotel rooms completed in Downtown Denver so far this decade to 2,213. Two of the five hotels currently under construction, the Born Hotel and the dual-brand Le Meridien/AC Hotel, are both close to opening but just didn’t quite make the cut for this June 2017 update.

Two hotels broke ground since the start of the year: the Hilton Garden Inn Denver Union Station and the Element Hotel Downtown in the Golden Triangle. With the 1,112 hotel rooms currently under construction and those already completed, at least 3,325 new hotel rooms will be added to Downtown Denver this decade. One hotel project was removed from the Proposed column (2525 16th Street) and no new proposed hotels were added since our last update. However, we are aware of several hotels “in the pipeline” that we may be able to share with you in the coming months. Stay tuned…

Civic/Other: There’s not much new to report under the Civic/Other category. Most of the public-sector and cultural projects were completed earlier in the decade. However, there are a few projects worth mentioning. The only project to join the Completed column since our last update is MSU Denver’s Aerospace and Engineering Sciences Building on the Auraria campus. Two projects remain under construction (CU Denver’s Wellness Center and the Kirkland Museum). The only new Proposed project is the Buell Public Media Center in the Arapahoe Square district, which has some fundraising to do before they can break ground. Still, it’s been an impressive decade so far for the development of civic, educational, institutional, and cultural facilities in Downtown Denver.

Since the start of 2010 within a 1.50-mile radius of the historic D&F Tower in the center of Downtown Denver…

Note: We stopped tracking townhome/rowhouse projects on DenverInfill recently because, frankly, there are just so many of them under development in the downtown-edge neighborhoods that it became impossible for us to track and report on them all. However, there were about a dozen or so of these projects included in our previous residential development summaries before we stopped tracking them, so they remain included for consistency reasons.

Excluding new townhome and rowhouse projects and excluding any new buildings of any kind three floors or lower, and including Completed and Under Construction projects but not Proposed projects… let’s take a look at the scale of new buildings in Downtown Denver so far this decade:

128 new buildings (four floors or higher) that if stacked on top of each other would have a total of 1,143 floors. They break down as follows:

While we are fans of skyscrapers here at DenverInfill, we’re even bigger fans of getting rid of surface parking lots and filling the gaps in the urban fabric. Thousands of years of building cities have taught us that successful and desirable cities are those with an intact and coherent urban form, a mix of uses in a compact built environment, and an exceptional public realm oriented around the pedestrian. Skyscrapers alone don’t make for a great city.

From that perspective, the 91 new buildings in the 4 to 9 floors range represent very important contributions to making Denver’s urban core much more, well, urban. In most cases, these buildings maxed out the allowable density set by zoning to provide a pedestrian-scaled urban form that serves as an appropriate height transition from lower-scale buildings of the nearby single-family neighborhoods to the skyscrapers of the central business district. And also in most cases, these buildings replaced vacant or surface parking lots that are inherently anti-urban and detract from the walkability of the area. All of those 4 to 9 story buildings filled in a lot of big gaps in our urban fabric, and that is a really good thing, as we still have a lot of underutilized land remaining in the urban core.

That being said, we are seeing a noticeable increase in the heights of new proposed projects. With the removal of each surface parking lot, the value of the remaining undeveloped land in the downtown area goes up, which then requires more building square footage to be placed on that land to make the project financially feasible. As buildings get taller and taller in downtown, they will inherently become more costly to build, and will therefore require more effort on our part as a community to ensure that—for new residential towers at least—new high-rise homes can be attainable to the full spectrum of Denver residents.

Coming this weekend to wrap up our June 2017 summaries… our latest 3D Future Skyline and Tower Crane Census posts!