At the end of June and December each year, we provide a summary of development activity within the Downtown Denver area. We review multifamily residential projects today and we’ll look at non-residential projects (i.e. office, hotel, and civic/other) tomorrow, followed by our 3D Future Skyline and Tower Crane Census features to wrap up 2017. For our previous Development Summaries, please look under the Special Features menu above.

As before, our survey covers the area within a 1.50-mile radius of the historic D&F tower at the corner of 16th and Arapahoe, an iconic landmark that serves well as the geographic center of Downtown Denver. We use a 1.50-mile radius because it does a good job of covering the downtown core area plus the closer-in parts of the downtown-edge districts like Uptown, Five Points, River North, and Lower Highland. Our semi-annual DenverInfill development summaries are a nice complement to the Downtown Denver Partnership’s development reports, which use the DDP’s official downtown and center city neighborhood boundaries rather than a distance-radius approach.

To view/download a high-resolution PDF of the exhibit below, click here. 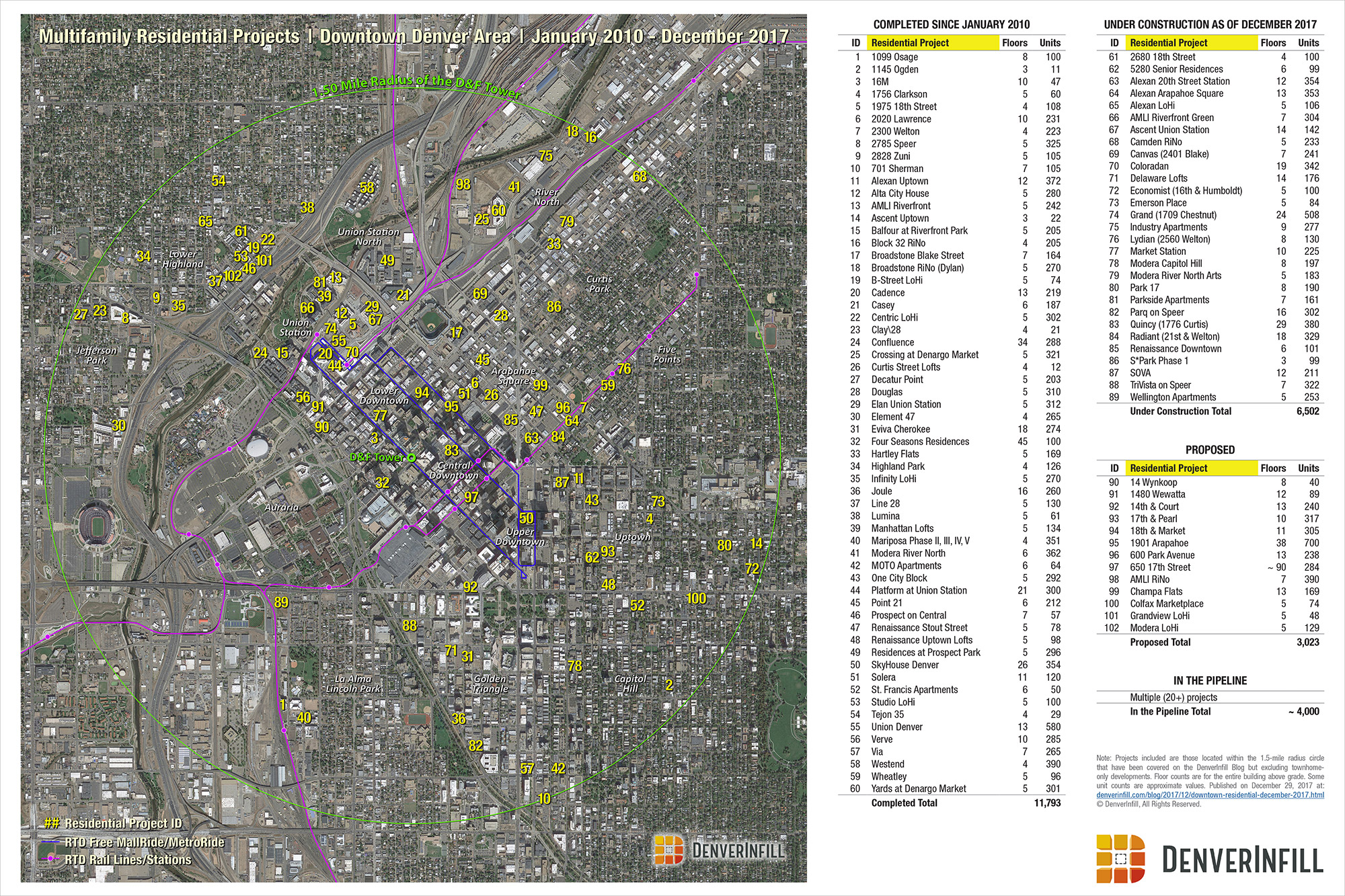 In the six months since our last summary in June 2017, a total of 1,598 residential units have been completed in our survey area, bringing the total number of multifamily homes completed in Downtown Denver since the start of the decade to 11,793. The largest project added to the Completed column was the three-tower Union Denver apartment community next to Union Station. Other large projects opening recently include Centric LoHi, the 34-story Confluence tower, and Infinity LoHi.

Keep in mind, this figure no longer includes the 254 townhome units included in our previous summaries, or any horizontally-attached housing units for that matter, including the much-debated slot homes that are ubiquitous in downtown-edge neighborhoods like Jefferson Park and Lower Highland. We also don’t track new residential units created within historic preservation or adaptive reuse projects, of which there have been many. If we were to account for all new dwelling units of all housing types, the end-of-decade total for the downtown area would likely be close to 20,000.

The number of residential units in the Proposed category, 3,023, is up from our June total of 2,359, while the number of units “In the Pipeline” hovers around 4,000, for a grand total of around 7,000 units that are “on the drawing board” for the downtown area.

Let’s take a minute to talk about the Proposed and In the Pipeline categories. Proposed projects include only those we have reported on at least once on the blog, which usually means the developer has made the project public to some degree and/or for which information like renderings, number of stories, unit count, etc. is sufficiently available. In the Pipeline projects include everything else and mostly consist of developments for which a Project Pre-Concept or Site Development Plan application has been submitted to the city. Some of these projects will never move beyond the concept stage while others will march steadily through the review and approval process and get under construction. For some developments like the 90(ish)-story 650 17th Street project, the number of residential units is going to change as the design evolves, and for other projects like the newly announced Colorado Rockies Mixed-Use development, a residential unit count isn’t even available yet. So don’t get too attached to these Proposed or In the Pipeline figures because a lot can happen to influence how many will actually get built. Instead, use the 7,000 total between the two categories as a general barometer of the level of development interest in more downtown-area housing.

In conclusion, the pace of new multifamily residential projects breaking ground has definitely slowed in the past six month, which largely reflects the status of the rental market, since almost all of the projects completed or under construction so far this decade have been apartments. The big unknown remains the condominium market. It’s been about six months since the major construction-defects barriers were resolved, and there has been an uptick in the number of for-sale condo projects either announced or rumored, but it is still early yet. The first half of 2018 should give us a much clearer view of where the downtown condo market is heading.