GOLDEN TRIANGLE
Modera Golden Triangle. On October 14, 2019, a Site Development Plan was submitted to the city by Mill Creek Residential for Modera Golden Triangle, a proposed multifamily development that would add 419 homes to downtown’s Golden Triangle district in two 16-story towers. The site is located at the southwest corner of 11th and Bannock where Rocky Mountain Public Media and a large surface parking lot are currently located. Rocky Mountain Public Media will soon be moving into their new home at the Buell Public Media Center in Arapahoe Square, clearing the way for the redevelopment of their site in the Golden Triangle. According to the project’s Urban Design and SDP submittals, the project would have a four-level parking podium holding 514 spaces wrapped by retail spaces on the ground floor, by office space on the 2nd floor, and by residential units on floors 3 and 4. The fifth floor would include indoor and outdoor amenity spaces along with apartments, with the remaining apartments on floors 6 through 16. The SDP remains under active review. Below are a couple of preliminary renderings obtained from the project’s Urban Design submittal. The project architect is Davis Partnership. 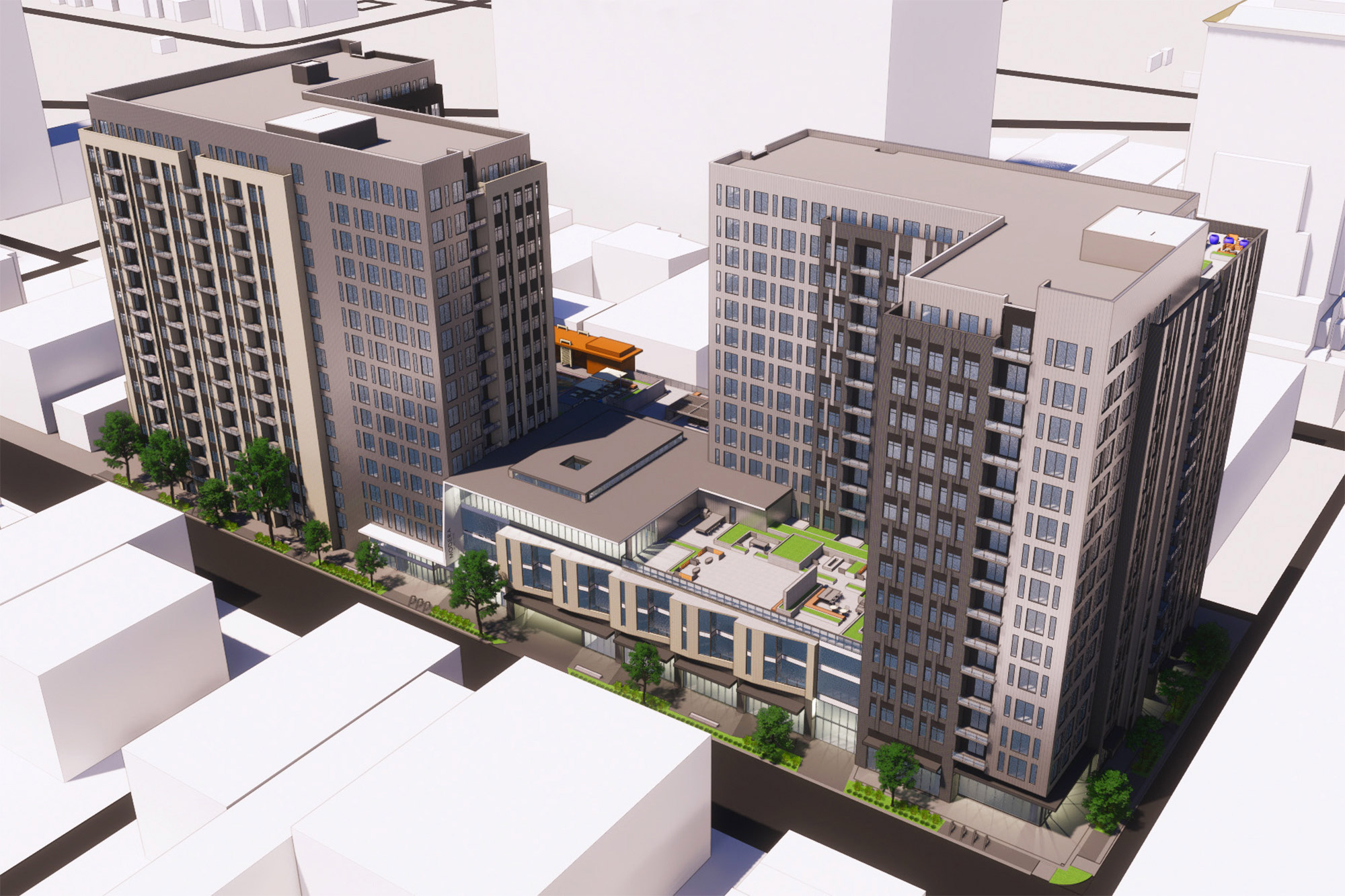 11th and Bannock. A new Concept Plan was filed with the city on August 16, 2019 for a 19-story apartment tower on the northeast corner of 11th and Bannock, immediately west across the alley from the historic Evans School. The property currently consists of a small one-story commercial building and a large surface parking lot. The Concept Plan was submitted by project architect Davis Partnership on behalf of the developer, Lennar Multifamily Communities. The new development would include ground-floor lobby and retail spaces, 479 apartment homes and 598 parking spaces. Since the Concept Plan was filed, the project’s Stormwater and Sanitary Plan was submitted in November and the Transportation Plan was submitted in December, indicating the development team is pushing forward. The following Concept Plan renderings, courtesy of Davis Partnership, show the building’s form, scale, and main architectural elements. 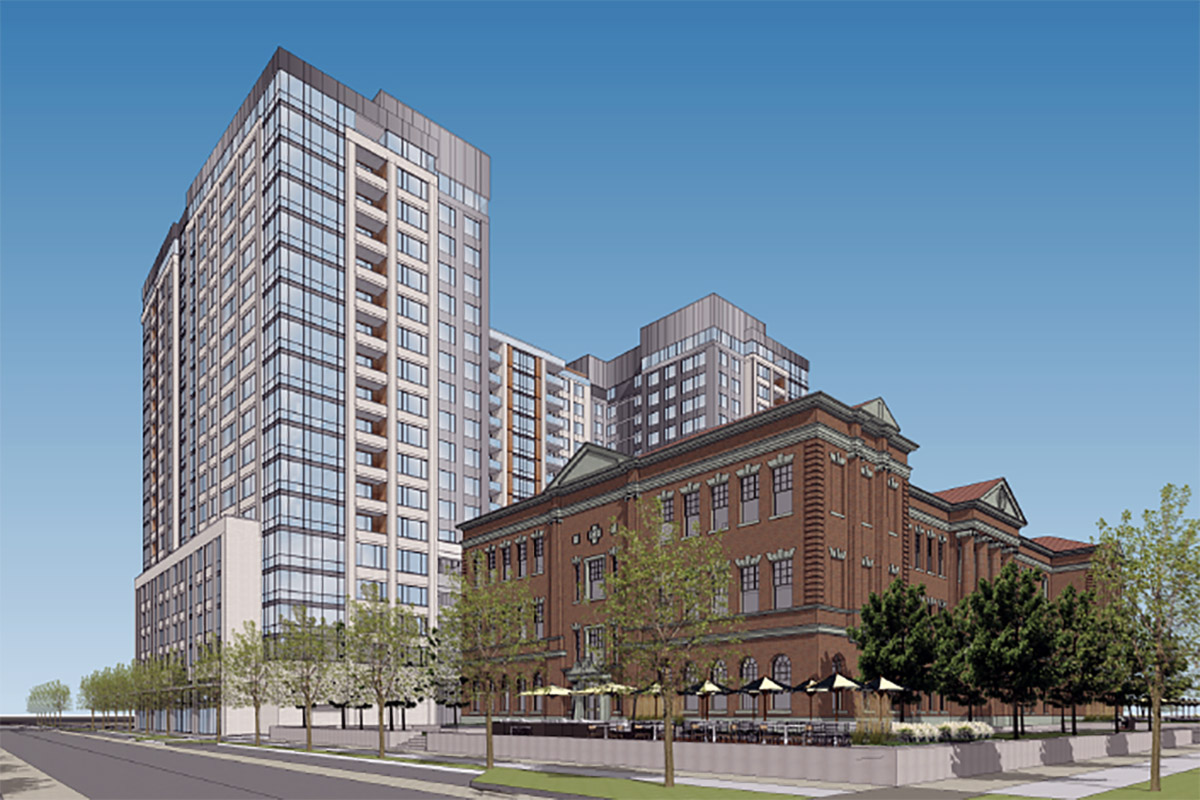 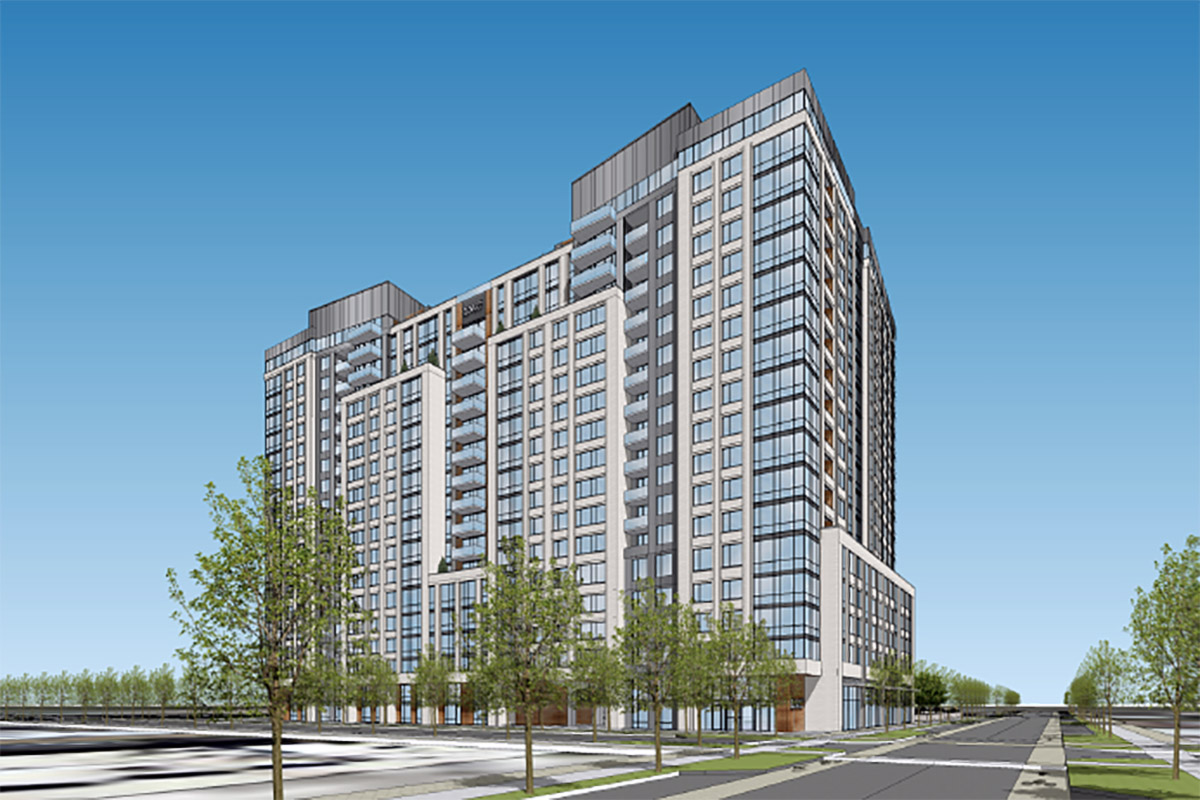 LA ALMA/LINCOLN PARK
Art District Flats. The Art District Flats development at 1225 Santa Fe is an eight-story apartment building that isn’t just proposed, but is actually under construction. We included it though in this “proposed projects roundup” since we had not yet introduced the project on DenverInfill. The development will include 126 homes, about 6,400 square feet of ground-floor retail, and 49 parking spaces. The property, just north of the 12th and Santa Fe corner, was previously occupied by a small commercial building, a vacant parcel, and a surface parking lot. Below (left) is a rendering of the project, courtesy of Ivins Design Group. Leon Cisneros is the developer.

Art District Dwellings and Marketplace. The proposed Art District Dwellings and Marketplace project would include 119 condominiums, 115 parking spaces, and about 11,000 square feet of ground-floor retail space in a five-story building at 625 Santa Fe. The project is being developed by First Stone Development and Studio Completiva is the architect. A Site Development Plan was submitted to the city in April 2019 and since then, additional technical plans have been submitted, including the initiation of the Building Permit review in October. Below (right) is a project rendering, courtesy of First Stone and Studio Completiva. 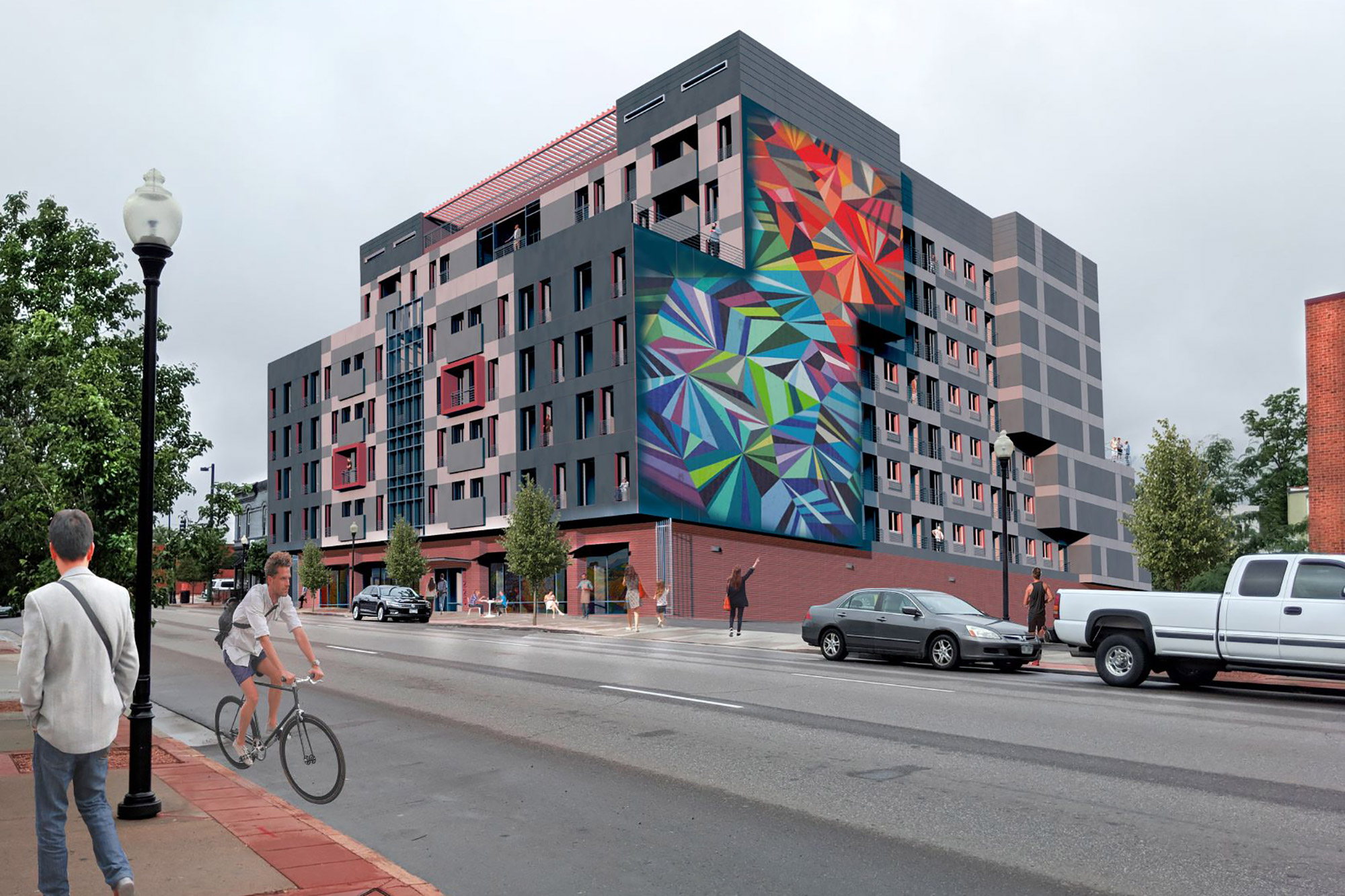 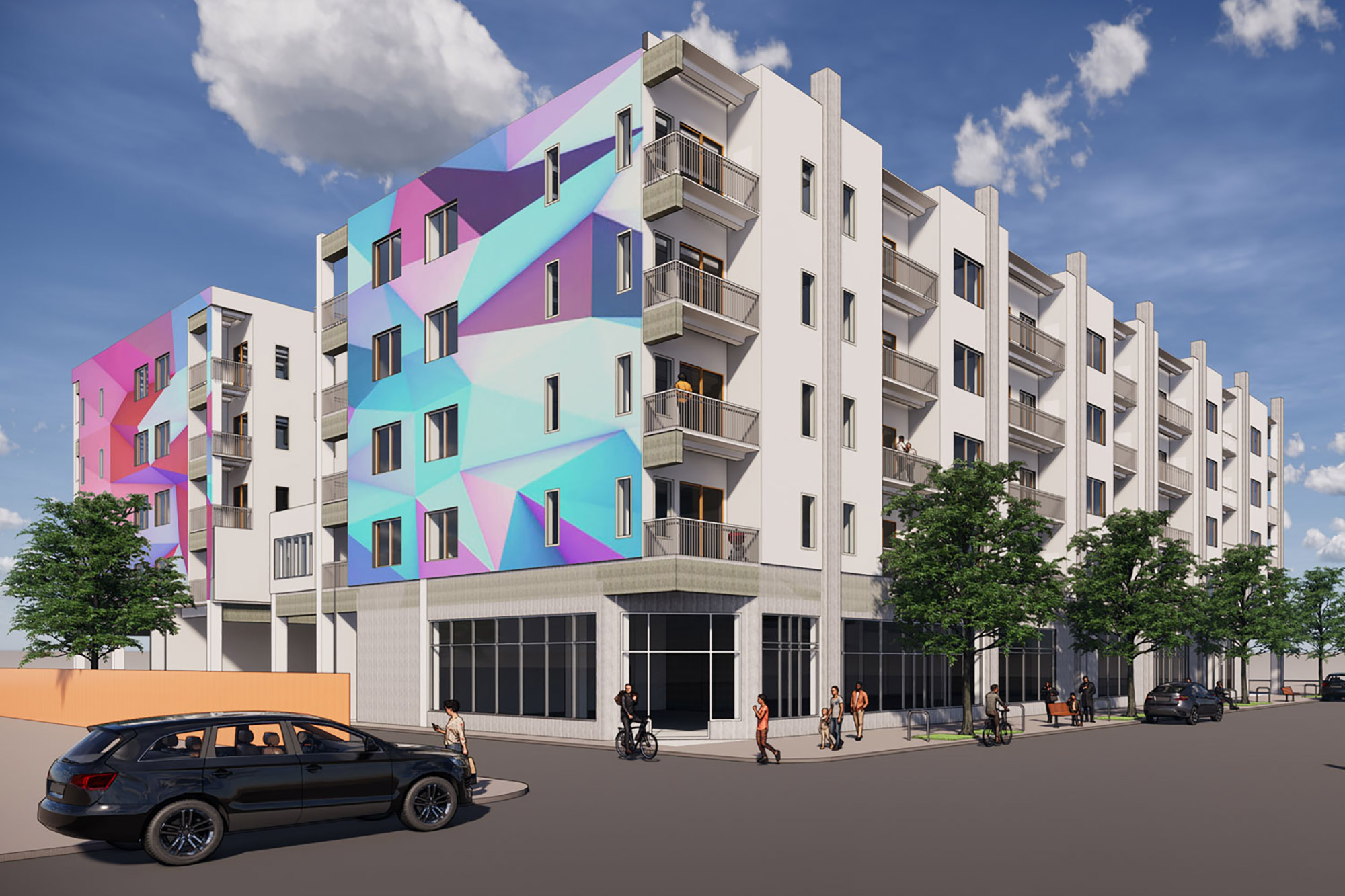 1277 Santa Fe. On November 8, 2019, a Concept Plan was submitted to the Denver planning office for a proposed eight-story apartment building at 1277 Santa Fe. According to this BusinessDen article, the project is being developed by Leon Cisneros, the same developer currently building the Art District Flats (discussed above) on the same block. According to the Concept Plan filing, the project would include 124 homes, ground-floor retail, and 51 parking spaces. The property, located at the southwest corner of 13th and Santa Fe, is currently occupied by a small one-story commercial structure, a large surface parking lot, and a billboard. The city recently requested a resubmittal of the Concept Plan.

1010 Santa Fe. A Concept Plan was submitted to the city on September 19, 2019 by Helix Architecture and Design on behalf of developer Holland Partner Group for a large parcel at 1010 Santa Fe Drive on the northeastern corner of West 10th Avenue and Santa Fe. The site is currently home to a one-story commercial structure and two surface parking lots. The proposed five-story multifamily residential development would consist of 203 homes, about 6,600 square feet of ground-floor retail space, and 213 parking spaces. Additionally, the project would incorporate modular construction for most of the apartment units. In December, the city asked for the development team to resubmit the Concept Plan.

1010 West Colfax. A Concept Plan was filed with the city on December 24, 2019 by developer Opus Group for a proposed seven-story multifamily development at 1010 West Colfax, a site consisting of three parcels currently occupied by a Burger King, an automobile-oriented strip mall, and a laundromat. The property on the southwest corner of Colfax and Kalamath sits across Colfax from the Auraria at Colfax light rail station and the Auraria Campus. According to the Concept Plan application, the development would include 297 homes, 272 parking spaces, and about 10,000 square feet of ground-floor retail. The Concept Plan is currently under review.

JEFFERSON PARK
19th and Clay. On August 28, 2019, developer Opus Group submitted a Site Development Plan application to the city for a residential development along Bryant Street immediately south of Turntable Studios and north of Mile High Stadium at the approximate location of 19th and Clay (which doesn’t actually exist as an intersection). The proposed development would include 277 homes in a 12-story building along with 288 parking spaces in three levels of structured parking. The SDP is currently under review and, on December 27, 2019, the developer submitted a Transportation Plan, indicating the project is in active status. The 1.65-acre site is currently a surface parking lot.

2711 West 25th. A Site Development Plan was submitted on September 18, 2019 for a proposed three-story condominium development that would provide 33 new homes and 32 parking spaces. The property, located just west of the 25th and Clay intersection, is currently occupied by four small single-family homes. On either side are two new townhome developments. The SDP was submitted by Hive Architects and is under active review with the city.

LOWER HIGHLAND
32nd and Shoshone. On June 12, 2019, a Site Development Plan was submitted by the Denver Housing Authority to the city planning office for a new affordable housing development at the corner of West 32nd Avenue and Shoshone Street. The site is currently occupied by 10 residential units owned by DHA that were developed in the 1970s. The redevelopment of this site would provide 53 homes, all affordable, and 53 parking spaces in a three-story building, along with an elevated outdoor courtyard with a playground and community garden. Demolition of the existing housing is underway and, in July 2019, the Building Permit review process was initiated, so construction will likely proceed soon. The project was designed by Van Meter Williams Pollack. The renderings below are courtesy of VMWP. 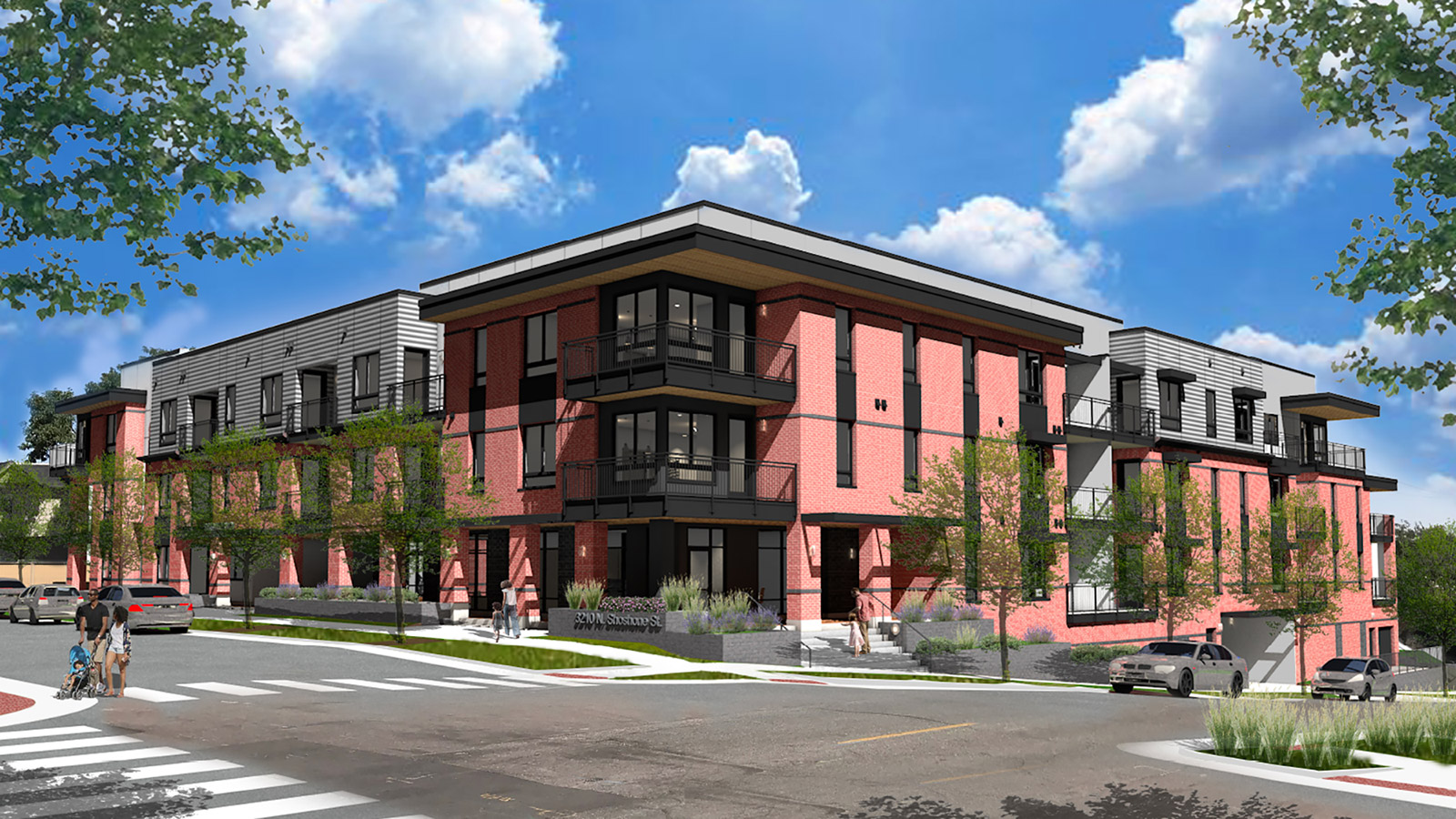 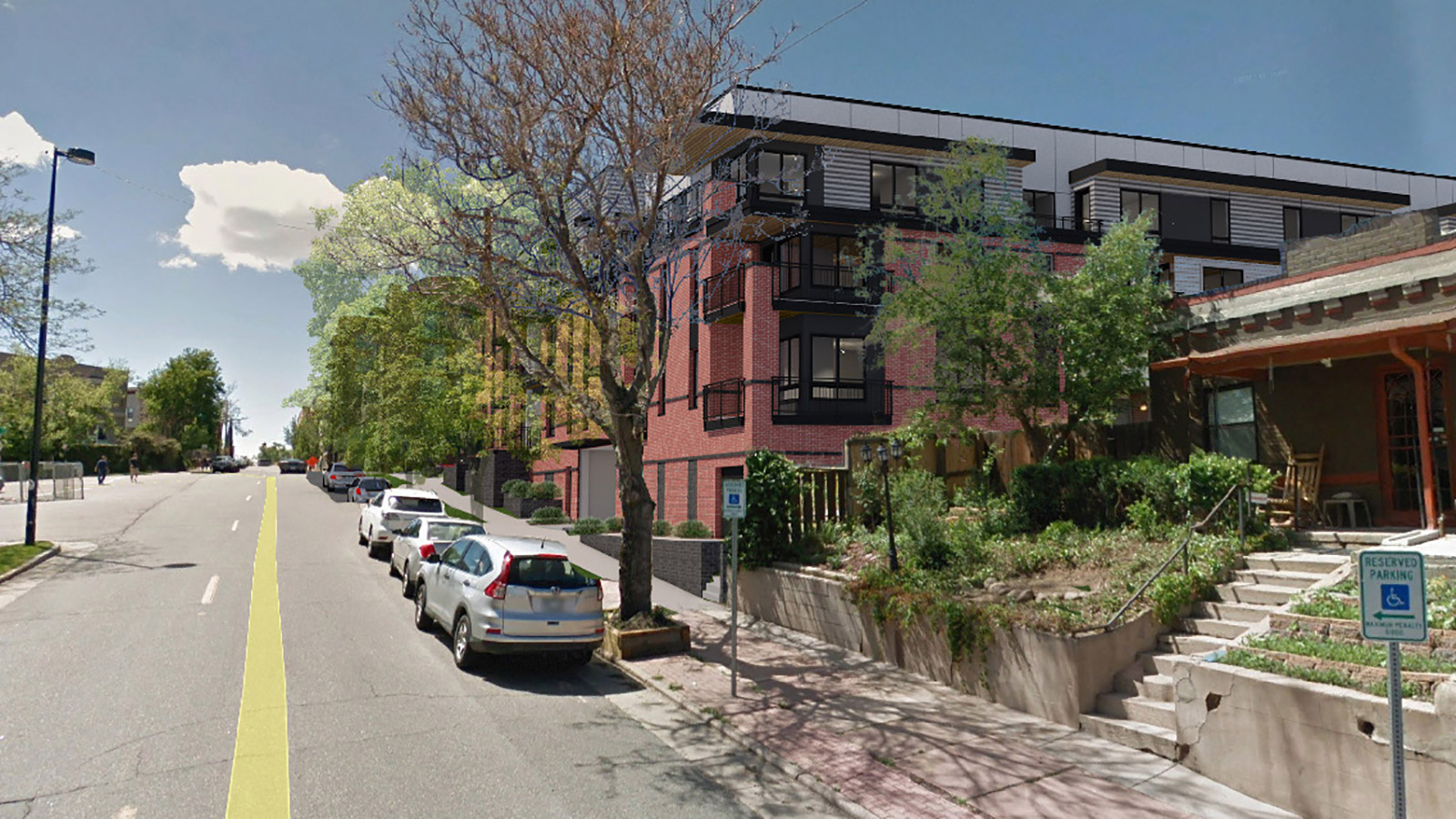 31st and Zuni. On July 16, 2019, a Site Development Plan was filed with the city by Meridian 105 Architecture on behalf of developer Infinity Property Collection for a proposed three-story multifamily apartment development at the northeast corner of West 31st Avenue and Zuni Street. The proposed residential building would provide 61 homes, about 2,500 square feet of ground-floor retail space, and 86 parking spaces on one underground level. The property was owned for many years by the State of Colorado, which maintained a Department of Agriculture office at that location. The State relocated the office and sold the property in 2018. The 1970s-era office building and parking lot are currently being razed. In September 2019, the Building Permit review process got underway, so construction will likely follow in 2020. Below is a rendering of the project, courtesy of Meridian 105 Architecture, along with a Google Street View of the existing building and parking lot before demolition.

33rd and Tejon. A Site Development Plan review is underway for a proposed five-story micro-apartment development on the southeastern corner of Tejon and West 33rd Avenue. The SDP was filed with the city on September 3, 2019 by project architect Davis Urban on behalf of developer Revesco Properties. The site is currently a surface parking lot. The proposed project would provide 41 homes, 12 parking spaces, and a small ground-floor retail space. Below is a rendering, courtesy of Davis Urban, along with a Google Street View of the existing site. 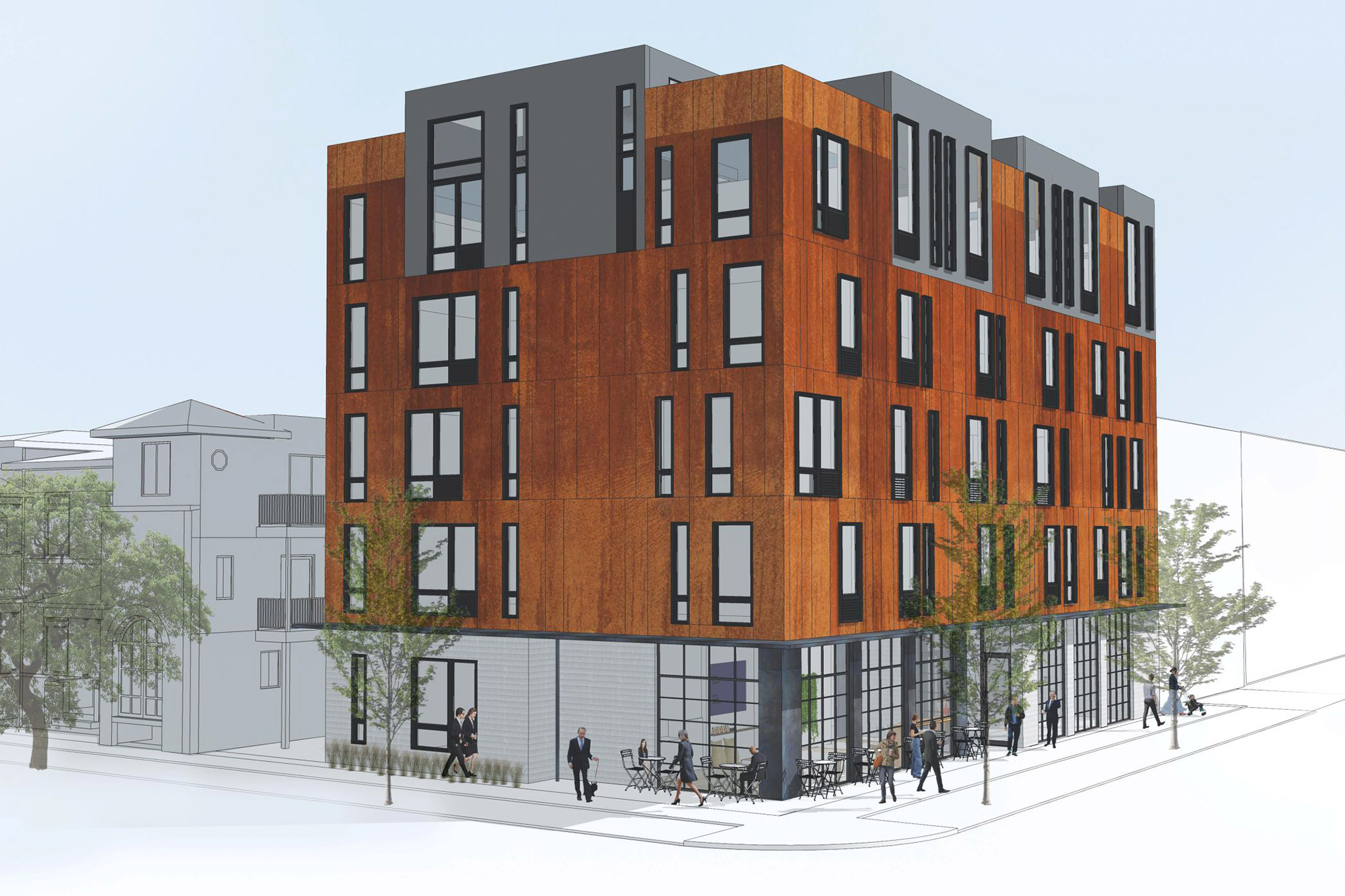 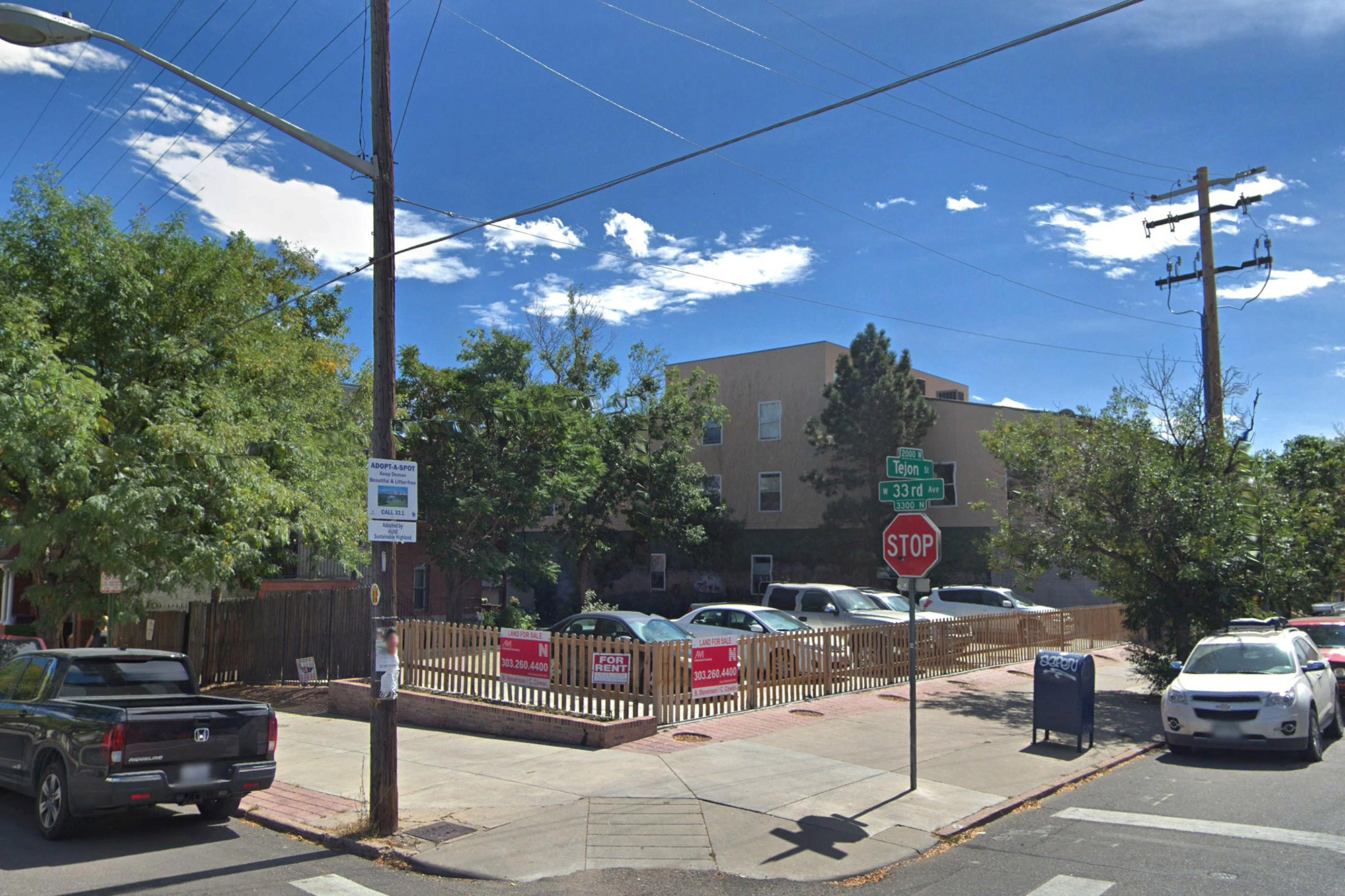