Today we will be focusing on the underground bus terminal right behind the historic station, along with the reconstruction of the 16th Street Mall in the Union Station area.

Looking out the northwest side of the historic station, workers are starting to cap and back fill the bus terminal (the dirt pile is beginning to get smaller). Stoplights are also beginning to be installed in preparation of rebuilding Wewatta Street. 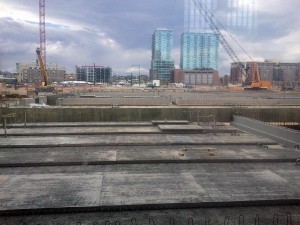 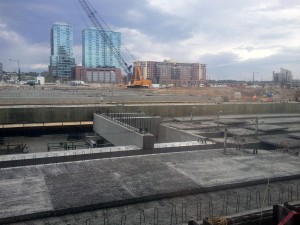 Kiewit has a great webcam mounted on top of 1900 16th Street. Check out the link for more great angles of the entire project, as well as photos from the past two years. In this Kiewit image below, six of the eight Commuter Rail platforms are visible (the other two will be shifted down a bit towards 18th Street). Also visible on the left is the rectangular hole through which elevators, stairs, and escalators will provide vertical access between the underground pedestrian concourse and the street level. That access point is the Wewatta Pavilion, which will be a twin of the Chestnut Pavilion located by the Light Rail Station. 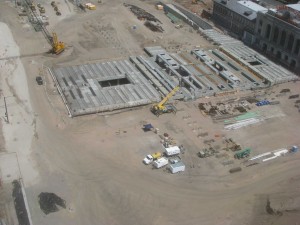 Heading over to the Mall, a lot of new concrete paving is underway, and portions are beginning to be completed. In the first photo you can see the new roadway under construction as well as new stop lights. In the second photo, the new wide sidewalks and multicolored concrete have been completed and new street trees planted. 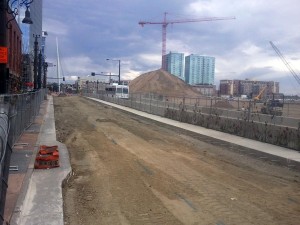 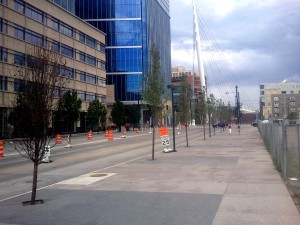 The old railroad tracks are also being removed along 16th Street. 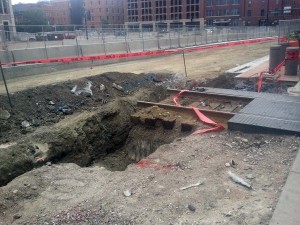 On the next Union Station update, we will focus on the 17th Street Gardens, as significant progress has been made.