Zocalo Development has been bullish on Downtown Denver with recent developments such as Solera, 2020 Lawrence, and the still under-construction Cadence adding close to a thousand rental units. Now it’s time to look at their first project in Cherry Creek, which is also experiencing a significant building boom. Zocalo’s new apartment building will be located on the northeast corner of First Avenue and Steele Street; right across the street of the new 88 Steele Creek development. Currently the site is just a dirt lot with some torn up pavement. Here is a map with the site outlined. 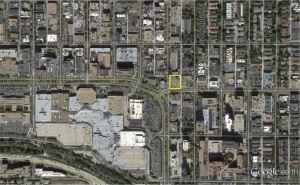 This LEED-Gold apartment building will rise 12-stories and provide the Cherry Creek neighborhood with 185 rental units. Amenities will include their famous “Velo” bike room, a rooftop deck, fitness room, and ground floor retail. Here are a couple of renderings courtesy of their website. 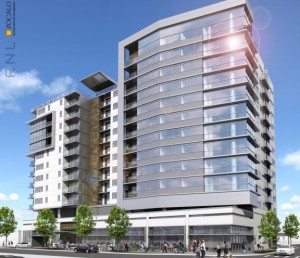 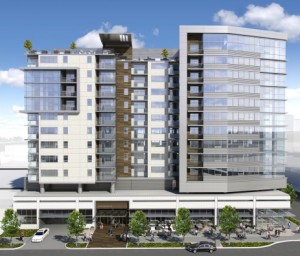 Back in April, Zocalo received an approval from the city to change the zoning on this parcel to be able to build a 12-story building. This caused a slight neighborhood uprising concerning over-development, and traffic congestion issues. Zocalo responded by offering $80,000 on bikes, car sharing programs and other congestion relief measures in hopes of avoiding a lawsuit from the Cherry Creek North Neighborhood Association. Completion for this project is 2015 with the construction time frame still unknown.